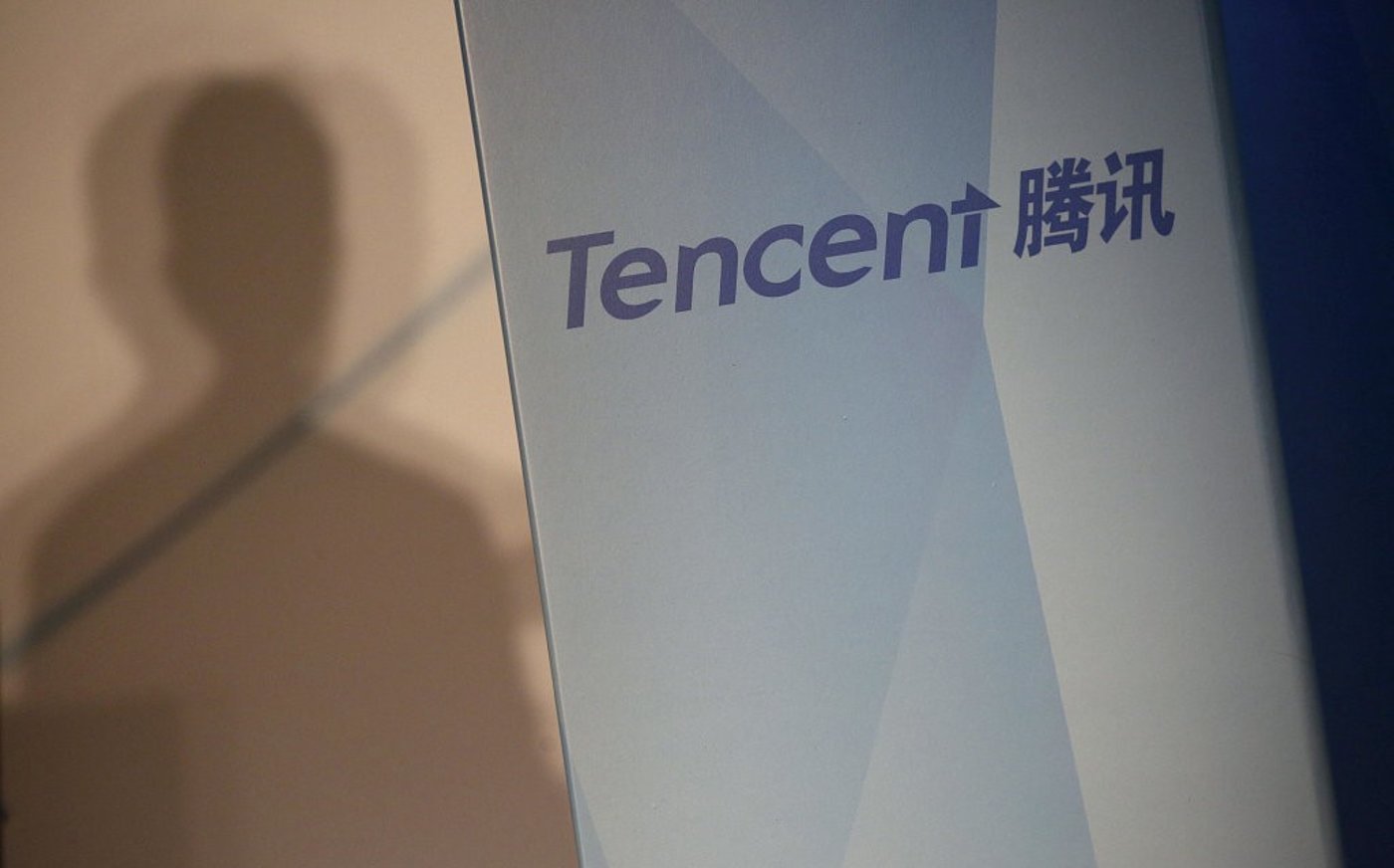 When it released its first-quarter 2020 results, Tencent experienced two voices of criticism and approval: the need to be questioned

On May 13, Tencent (00700. HK) released its first quarter performance report in 2020 after Hong Kong stock trading. In 2020, Tencent's revenue was 108.065 billion, up 26% year-on-year; its net profit (non IFRS) was 27.079 billion, up 29% year-on-year, higher than the market expectation. Tencent maintained this record again after its first single quarter revenue of more than 100 million in Q4 last year.

From the perspective of business segment Tencent's revenue by business is divided into three parts: value-added services (social networks for online games), financial technology and business services, and online advertising (social and other advertising media). Below is the specific financial performance of Tencent's business lines in the Q1 quarter of 2020. 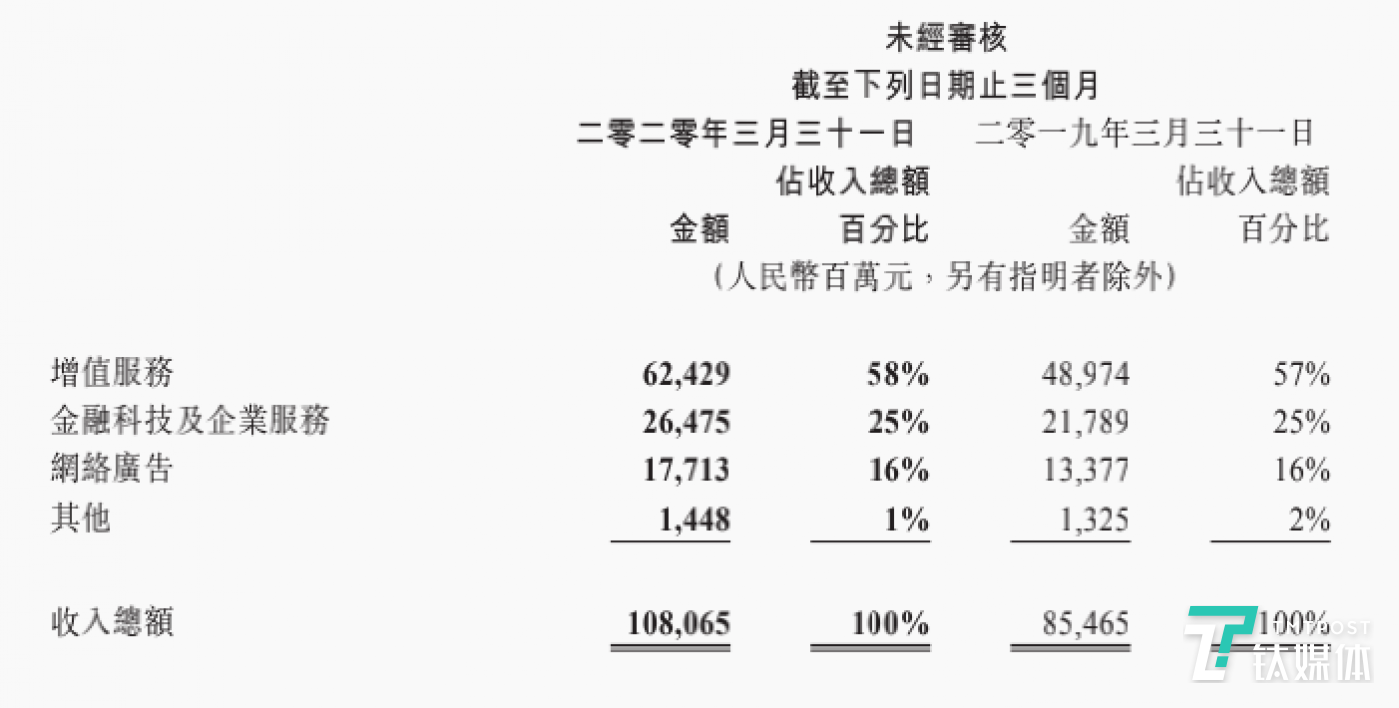 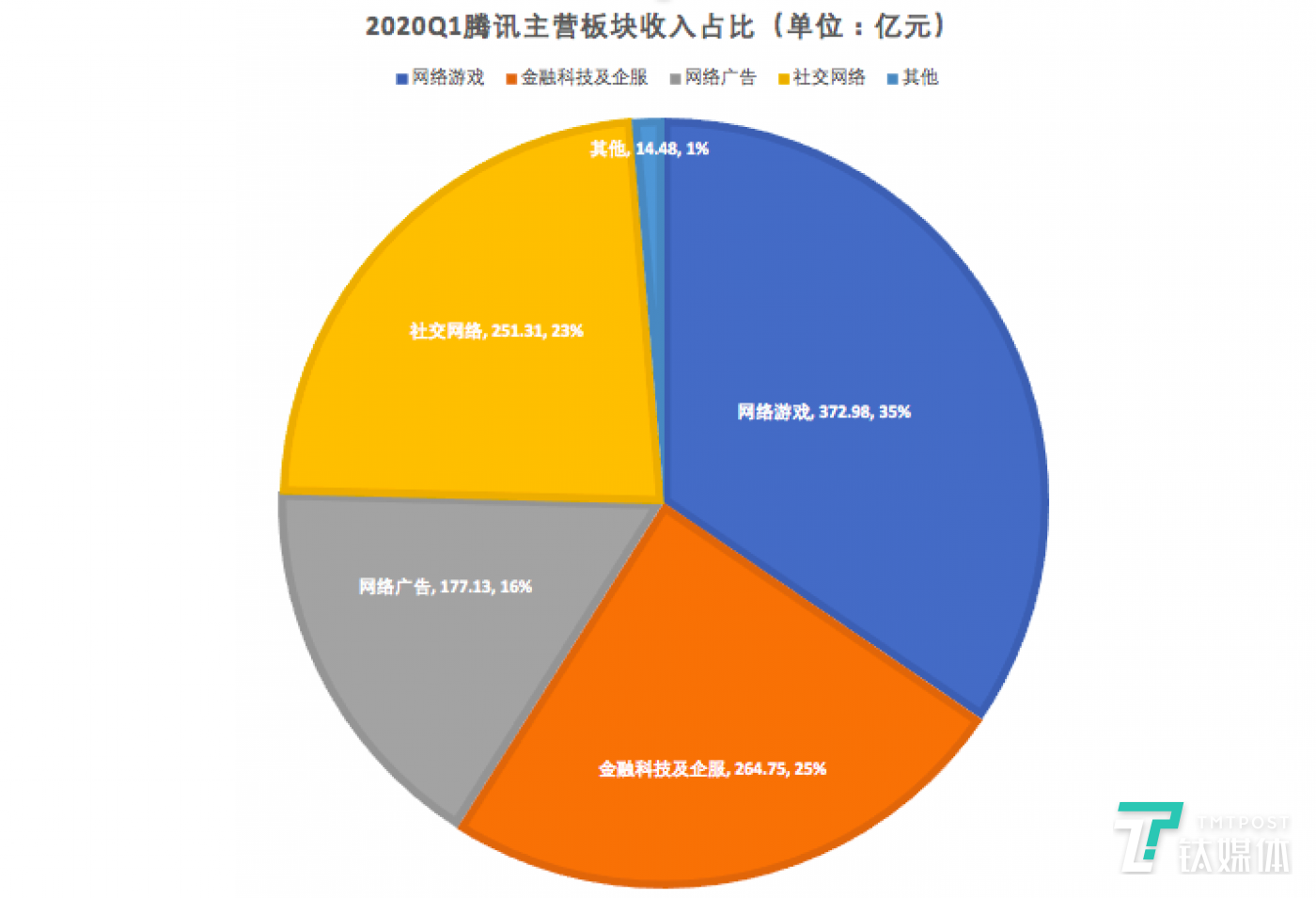 In general, Tencent's diversified revenue structure has been formed, which helps it resist market risks. 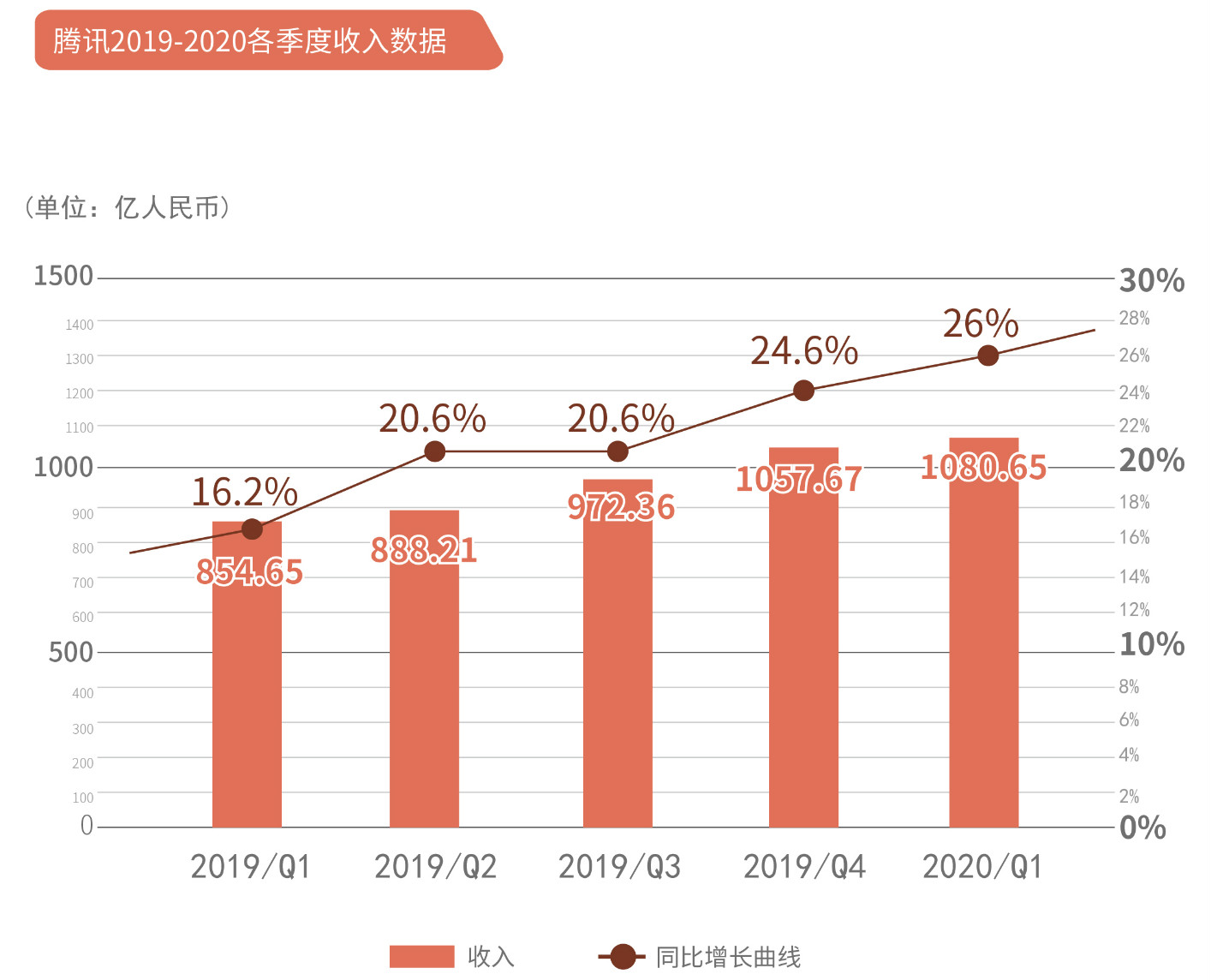 Tencent maintained double-digit revenue growth in each quarter of 2019

Anxin said the expected Q1 had a short-term negative impact on the company's business, but would offset the unexpected performance of mobile games and effect-like social ads, maintaining the buy rating.

Under the house economy, the net swims again becomes

According to the financial report, the daily life of "glory of the king" can be improved through the introduction of game content and in game activities. And "peace elite" has also increased user activity through cooperation with rocket girl 101. In the international market, Tencent held a two-year celebration for the pubg mobile game, which enhanced its localization ability to meet the needs of users in different regions.

According to sensor tower data, in January this year, mobile game "pubg mobile" generated nearly $83 million in overseas revenue, up year on year 79.8% 。 As of March 15, 2020, the total overseas downloads of pubg mobile exceeded five point one five Billion times. In addition, the market share of peace elite in South Korea, South Asia and the Middle East is over 55%.

During the Q1 epidemic, the home economy, including games, achieved good, online entertainment as a whole has been greatly improved. And with the end of the domestic epidemic,

Among them, the number of Tencent video subscription accounts increased to 112 million, a year-on-year increase of 26%; the number of music paying users exceeded 43 million. In terms of short video, the user traffic and short video browsing of micro vision, news information flow platform and small programs have been improved.

According to the analysis of Changqiao securities, Tencent still has many profits hidden in the first quarter report, and the actual operation of its business is much higher than that shown in the financial report. This profit will be released in the next quarter of 2020.

According to the financial report, the growth is mainly driven by the growth of business payment and financial management platform revenue, as well as the revenue growth brought by cloud services to further grasp vertical industry opportunities such as video, education and retail.

However, the decline of income on a month on month basis is mainly due to the decrease of payment activities, especially offline transactions and withdrawals. In addition to the impact of offline payment, there is also a certain degree of delay in the implementation of cloud service projects, which slows down the business growth of financial enterprises. However, in the last week of April, Tencent's daily average business volume has returned to the level at the end of 2019.

Tencent's president, Liu Zhiping, said at the earnings conference that

This is mainly reflected in:,The epidemic has accelerated the digital transformation of the Internet and promoted the popularization of enterprise level products.

In terms of cloud services, Tencent launched telecommuting products during the epidemic

We haven't considered how this part will be realized in the future, but we do see more and more users.

Online advertising outperforms the market, and the role of small programs is becoming more and more obvious

Industrial Securities pointed out that the overall revenue of Q4 advertising industry in 2019 is declining. Apart from bilibilibili, the advertising revenue of other Internet advertising giants has declined year on year, and the revenue in the first quarter of 2020 is also unsatisfactory. Affected by large-scale public health events, the growth rate of advertising industry revenue slowed down, even showed negative growth.

Statistics of advertising revenue of Internet companies by industrial securities

Southwest Securities Research Report said that since social advertising has no content purchase cost, its gross profit margin is higher and there is more room for improvement. With the recovery of the epidemic and the warming of the macro-economy, Tencent's advertisment growth is expected to continue to maintain a high-speed growth. In addition, applets and wechat search are expected to become a new incremental entry to advertising revenue.

At present, the number of daily active accounts of wechat apps has exceeded 400 million, and its business closed-loop is being improved. On February 17, wechat launched the public test of live broadcast component to help merchants complete the closed-loop sales of goods through live broadcast.

Asked if WeChat would develop its e-commerce business, Liu said

He also said Tencent will continue to consolidate the ecosystem of small programs, which are not in a hurry to realize. Applets help us increase traffic and build good service relationships for more business customers.

Although the Mini Programs live broadcast has not yet been released on a large scale, the potential remains. Mini Programs is one of the infrastructure of the company's ecosystem, Liu said, and a series of measures during the epidemic helped to boost payments and advertising in the long run.

Related news
2019 Q1 China's public cloud market share: Alibaba Cloud 47.3% lead
Tencent Q1's net profit of 108.1 billion yuan was 29.4 billion yuan, a year-on-year increase of 6%
Tencent Q1's revenue is 108 billion yuan, up 26% and wechat's monthly revenue is 1.2 billion yuan! QQ gets bigger and bigger
Up 31%! Tencent's Q1 online game revenue is 37.298 billion: relieving users' worries during the epidemic
After Tencent's Q1 financial report, the market value of Tencent hit a new high
Tencent music Q1 financial report is still stable three ways to help pay growth
JD.com,Tencent Extend Strategic Partnership on AI
Hot news this week
Sources say Penguin Random House's deal to buy Simon & Schuster has fallen through
Any chance of taking over the agency? Sources say Tencent has been in contact with Blizzard for at least a year
Blizzard's founder responded to NetEase's contract renewal: Cooperation is a two-way street, and we will do our best to make Blizzard games accessible to Chinese players
Ali suddenly released a new chip, the domestic chip breakthrough, abandoned the American chip fantasy
Better than Huawei or Apple? It is revealed that Samsung S23 uses satellite communication: can also space voice
Players recognized as the best of the year! The Old Man Ring won four awards at the 2022 Pension Rocker Awards
According to sources, TSMC replaced Samsung to win a large order of Tesla's assist driving FSD chip, based on the 4/5nm process
Today is the 18th anniversary of Blizzard's World of Warcraft: unfortunately, the national service will be discontinued in January
Jinshanyun reported revenue of 1.97 billion yuan in the third quarter, down 18.4 percent year on year
Xiaomi Q3 has not returned to the normal growth track. Wang Xiang: The idea of high-end strategic quick wins is incorrect
The most popular news this week
China AVS3 video, audio standards rise! 8K/4K/ mobile for the first time
AMD ripper is finally not lonely! Intel Fever U returns to 56 core hard carry 64 core
The price of Xiaomi 13 to 4,500 yuan has sparked heated debate among netizens: Should you buy Xiaomi at more than 4,000 yuan
Thunder online game accelerator announced that it will be officially suspended on December 1
With the NIL technology, Canon wants to provide China with a lithography machine comparable to the EUV
Wechat iOS version 8.0.31 private test update: Added the function of dragging pictures and videos to send with one key
AMD Zen4 12 core price record low! The cumulative price drop is 20%
Priceless metal is thrown away: One million scrap mobile phones can recycle 68 kilograms of gold
The world's first 6GHz! Intel's "Ashes Edition" arrives early: You're out of the sky
SONY loosen up! PlayStation's multi-year super exclusive is coming to PC