According to foreign media reports, Today, NASA officially announced a new standard for lunar exploration, Artemis Accords》. And the agency hopes that other countries will agree with these provisions, which NASA list how humans will operate on the moon, including how to extract resources from the surface of the moon, how to protect the Apollo site, and so on. 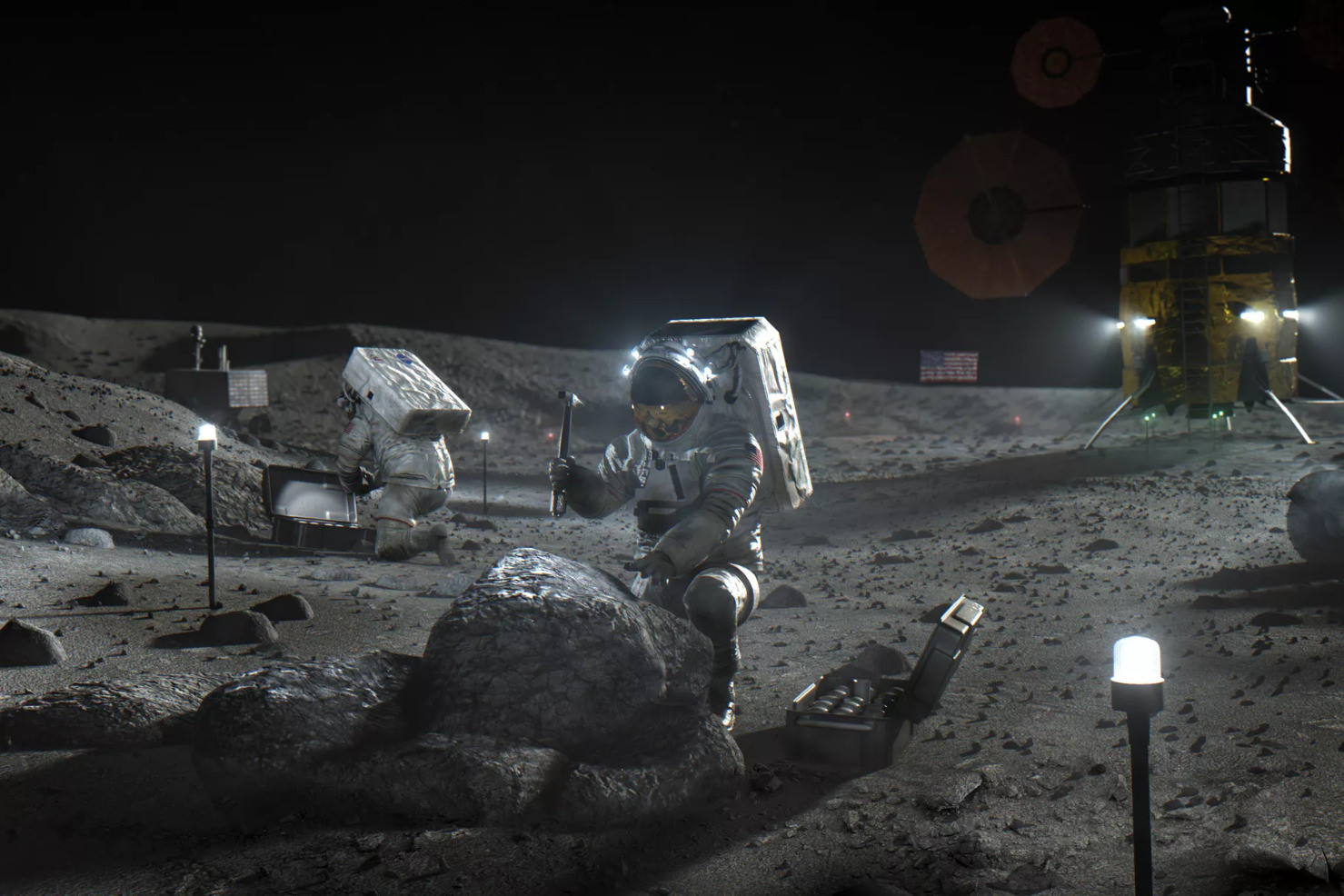 The Artemis Accords》, first reported by Reuters, is tied to NASA Artemis plans. NASA plans to send the first woman and the next man to the moon in 2024. NASA director Jim Briddenstein has made it clear that he wants NASA international partners to work with NASA to build a sustainable presence on and around the moon. However, NASA hope that everyone can agree on the behavior after reaching the moon.

"When we go to the moon, there is a basic framework we all agree on ," Brittenstein said at a meeting Friday morning. If you agree with the framework, of course, we want you to be part of Artemis plan ." According to the report, the framework is jointly developed by the NASA and the State Department and the National Space Commission.

The International Framework for Space Exploration, which was signed and enacted in 1967, is a little vague for today's exploration of outer space, and the Artemis Accords》 was born, and it will provide more for NASA the moon 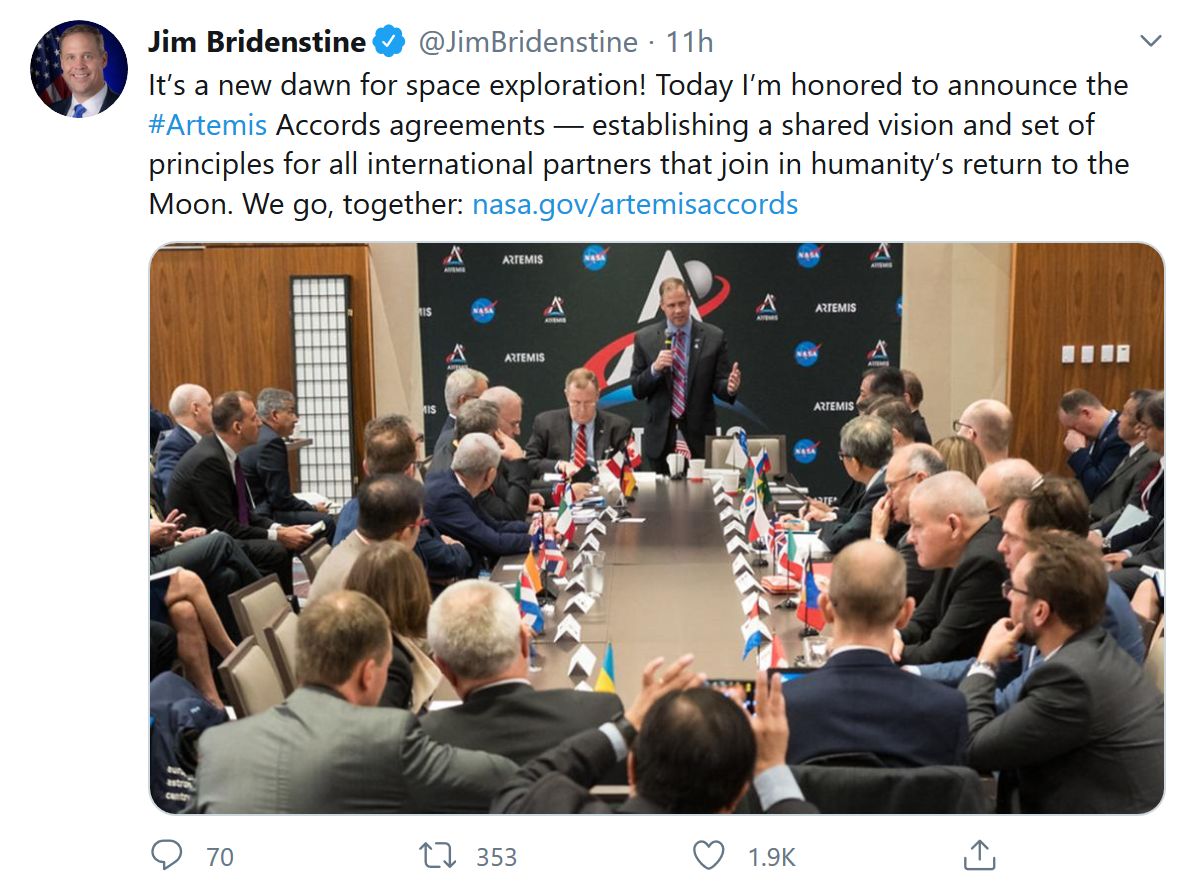 One thing the agreement will identify is a "safe zone," which will give potential lunar explorers working space on the planet free from interference from other countries. In addition, the agreement will ensure that countries can exploit and use the resources they find on the moon.

Related news
NASA Announces "First Moon Portal" Artemis' First Business Partner
NASA says Australia will help support its Artemis and Moon to Mars programs.
NASA Preheating Next Generation Space Suits for Artemis Mission
NASA says at least 26 countries are interested in participating in the U.S. moon landing program
NASA rated Artemis lunar mission partner blue origin better than SpaceX
NASA announced "Artemis Accords》： wants to provide standards for a new era of exploration
NASA: Artemis mission astronauts may not visit the moon's South Pole
The United States signed NASA's Artemis agreement with seven other countries to set rules for exploring the moon
Start a journey around the moon together: Canadian astronauts confirm their first manned mission to join NASA's new rocket
NASA has again postponed the launch of the Artemis I lunar mission
Hot news this week
Young people can't change their mobile phones one brother pressure in the channel inventory up to 50 million
Chinese mysterious female rich 560 million buy European luxury homes: the full amount of cash is paid at a time
Criminal gang candid courier list takes the money 8 people to be arrested
Do you make feed after Yi Lord? Zhenghong Technology M & A has mystery
Internal personnel have caused players to contradict? Netease "Yin Yang Shi": Impossible!
The first pop -up shop in the United States opened, Bubble Mart opened the North American expansion plan
The goose factory is finally making a move on the metasverse?
Big news! The police report henan village banks can not withdraw cash case, has captured a number of suspects
With this charging treasure that can legal "stealing electricity", I don’t worry about the mobile phone out of power
Tesla has lost nearly $600 million after the richest Chinese lost 89% of his net worth in the bitcoin crash
The most popular news this week
The Google Pixel 7 Pro will have a Samsung display: brighter than the Pixel 6 Pro
Nokia Style+5G new machine Pass FCC certification: 5000mAh battery+20W fast charge
Behind the collapse of the Mijia app, the lack of PLANB of smart homes
It is said that the Fuji XT5 camera will use 40 million pixel CMOS
The Internet Information Office launched the network security review of Zhiwang. Jack Ma appeared in Spain. The paid video of station B made the UP owner over 10,000. LeTV Video an...
Build a nuclear power plant on the moon? NASA selected three American companies to develop and develop
Gree Electric: Jinghai Interconnection today passes 1.86%of the shares through the large transaction company
Zhiwang was checked! Cyber ​​security censorship may become a normalized element of network security ecological governance in my country
Small Commodity City: Acquisition and approval of Quick Institute will obtain Internet payment licenses
Chinese CPU maker Loongson Zhongke has been granted hundreds of patents with a market value of over 30 billion yuan