"The result is worse than we expected." On May 16, when asked about the US Department of Commerce's upgrading of chip control on Huawei, a Huawei insider told the first financial reporter. "But the more extreme the situation is, the stronger we should be." On the same day, an article entitled "no scars, no rough skin and thick flesh, heroes have suffered a lot since ancient times" was launched on Huawei's internal forum. The move is seen as Huawei's attitude towards the latest move by the US Department of Commerce.

In the view of analysis institutions, the U.S. chose to adopt the "most extreme" way to open the Pandora box, which will affect the long-term trend of the global semiconductor industry chain. In a report released in March this year, BCG pointed out that U.S. restrictions on technology trade between China and the U.S. may end its leading position in the field of semiconductors. If the U.S. completely prohibits semiconductor companies from selling products to Chinese customers, its global market share will be lost by 18 percentage points, and its revenue will be lost by 37%, which will actually lead to the loss of technology between the U.S. and China Unhook.

U.S. technology chip stocks fell across the board Friday amid news 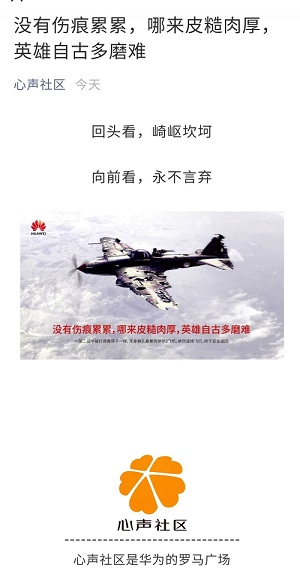 On May 16, 2019, the U.S. Department of Commerce included Huawei in the entity list on the basis of national security. But a year later, Huawei not only survived, but also the indicators in the "spare wheel" plan are developing well.

On April 21, Huawei released its first quarter business performance in 2020. According to the information displayed on the official website, in the first quarter of 2020, Huawei achieved sales revenue of RMB 182.2 billion, a year-on-year increase of 1.4%, and a net profit margin of 7.3%.

Although Huawei lost part of its overseas sales share, this year, Huawei not only accelerated its iteration on chips, but also blossomed in software, ecology, computing and other fields. Hongmeng operating system, HMS, appgallery, intelligent computing strategy, Kunpeng ecology and new businesses emerged in an endless stream.

On 5g, Ding Yun, managing director of Huawei and President of BG, the operator, once told the first financial reporter that the hardest place to fight grew faster. In February this year, Huawei has obtained 91 5g commercial contracts, and more than 600000 5g mass MIMO AAU (active antenna unit) modules have been shipped.

In the view of the United States, the sanctions on Huawei's entity list are obviously "invalid".

In the latest document, the U.S. Department of Commerce said that although Huawei was included in the list of entities under the control of the export control regulations (ear), Huawei and foreign Fabs continue to use the software, equipment and technology in the U.S. business control list (CCL) to provide Huawei with semiconductor products, so the restrictions on export management need to be upgraded.

This means that, from chip-making to chip design EDA software to semiconductor devices, the u.s. has opted to take the "most extreme" approach to blocking global semiconductor suppliers from supplying Huawei, and tsmc, which was previously the focus of the storm.

Since Huawei was listed in the "entity list" by the United States, TSMC has supported Huawei several times. The company is one of the major chip manufacturers of Huawei Hisilicon and the world's largest wafer foundry.

Fang Jing, chief analyst of Cinda electronics, said that the restrictions on wafer factories in the United States are more about applying for licenses, while TSMC announced to set up factories in the United States, which is also seen as a gesture of goodwill to the United States, so that its major customers will not be affected by the ban. At the same time, he said that the text of the new regulations did not mention the specific landing measures related to EDA, and EDA had been cut off from upgrading last year. Now Huawei Hisilicon is using the old version of EDA for product design, which is unrestricted.

Dai Hui, a former Huawei employee, said that although China has reached a high level in design, packaging and whole machine, the underlying high-end equipment, EDA software and materials are mainly from the West. It is impossible and unnecessary for China to be completely independent in this field, and the United States also depends on China.

The CEO of a domestic chip listed company, who did not want to be named, told reporters that the new rules are not in everyone's interests and 120 days is used to solve the problem.

Faced with the upgrading of technology regulation in the United States, Xu Zhijun, chairman in office of Huawei, once told the first financial reporter that once Pandora's box is opened, it may be a devastating chain damage to the global industrial ecology, and it may not only destroy Huawei. "It's hard for any player in the global industry chain to be alone."

As you can see, Huawei is also making multiple preparations.

According to the latest news from Huawei's supply chain, Huawei Hisilicon has urgently placed an order of 700 million US dollars (nearly 5 billion RMB) with TSMC for wafer. Within 120 days after the implementation of the new regulations, TSMC and other companies can still provide continuous supply to Huawei.

People close to MediaTek told the first financial reporter that at present, MediaTek is also in active contact with Huawei. In the future, more 5g chips will not be excluded from Huawei's products.

Huawei is also increasing its own chip design and development efforts and use. It is reported that in the past, Huawei mobile phones will be equipped with Hisilicon and Qualcomm processors respectively according to different product lines, with the proportion once close to five to five. Today, more than 90% of Huawei mobile phones use their own Hisilicon processors.

The source told reporters that the low cost version of Kirin 820 also went through the new product certification process in SMIC. In the future (Huawei) will replace Kirin 710A in both the new generation of 7 series processors and the 820 low cost version in the certification process, and become the main low-end processor of Huawei in the next 1 to 2 years, which will drive the performance of the domestic semiconductor industry chain.

CITIC electronics said that the chip manufacturing link in the Sino-U.S. science and technology competition is the focus of the U.S. pressure, which has long been good for the development of the semiconductor sector. It still stressed that the core logic of the domestic semiconductor sector is independent and controllable in the dimension of ten years.

Export restrictions or changes in U.S. leadership in semiconductors

Huawei has said that the digital infrastructure industry is highly dependent on the global supply chain. The equipment provided by any company is actually produced and manufactured through a global supply chain. The future digital infrastructure must be the result of multi factory cooperation, so simply preventing a company from participating in this market cannot fundamentally solve the problem.

Eric Schmidt, Google's former chief executive, told the media that the cost of decoupling from China would be high. While cutting ties with China will make American supply chains and manufacturing more resilient due to lack of exports, tensions are not good in the long run.

This is especially true for chip companies. For us chip companies, the Chinese market has always been the overseas strategic market of us semiconductor companies, and no one is willing to be the victim of "decoupling" between China and the US.

"In the short term, what domestic semiconductor companies do and what Intel does is not an alternative relationship ," Yang Xu, Intel's global vice president and China president, told reporters in early April. It should be more complementary at this time ." He believes that the next 20 or 30 years can not be separated from the fact that the two engines of the Chinese and American economy drive the world.

In the past year, Qualcomm has also actively participated in 5g development in China. According to financial reports, more than two-thirds of Qualcomm's revenue comes from China.

If the u.s. continues to tighten export controls on commercial chips in china, u.s. semiconductor companies will be less competitive and u.s. long-term leadership in semiconductors will be threatened, the boston consulting group said in a report.

According to the report, if the global share of U.S. semiconductor companies declines to about 30%, the United States will transfer its long-term global semiconductor leadership to South Korea or China. Fundamentally, the US may have to rely heavily on foreign suppliers to meet its own domestic demand for semiconductors. Annual R & D investment is expected to decrease by 30% to 60%, and US industry may no longer be able to provide the technological progress necessary to meet the future needs of the US defense and national security system.