The first launch of the UOS product system of uni Trust: building the Chinese own operating system

Operating system is the foundation and core of information technology system.

In recent years, China's innovation in the field of Internet of things, big data and cloud computing is endless, but most of them are located in the application layer. At the level of underlying technology and basic products, China is far behind the world's leading level.

Unified trust software can be described as a breaker.

Yu Jing said that Beijing's number of credit enterprises accounted for 43% of the total number of credit enterprises in China, ranking first in the country, with significant scale effect and perfect industrial chain. In terms of development direction, the information industry should be based on independent innovation, benchmarking core key technologies, and building a high-quality development driving engine.

Ni Guangnan, academician of the Chinese Academy of engineering, said in his speech that in recent years, major information security incidents have occurred frequently, affecting all walks of life. China needs to develop its own basic software and hardware as soon as possible, and change the situation that core technologies such as operating systems are controlled by people. He said that unison UOS represents the highest level of self-developed operating system in China, with unprecedented improvement from bottom level compatibility to interactive interface and application ecology.

Huang Tao, a researcher at the software research institute of the Chinese Academy of Sciences, said that he hoped that Chinese operating system enterprises could increase their investment in innovation, cultivate their own innovation ability and produce core technologies from 0 to 1. At the same time, Chinese operating system enterprises should also pay attention to ecological investment and construction, well adapt with upstream and downstream manufacturers, and form sustainable development ability.

Unified trust UOS personal experience edition was released for the first time at the conference. Based on the Linux 5.3 kernel, the personal experience version is designed for personal users to launch a safe, stable, beautiful and easy-to-use desktop operating system, which supports x86 architecture and is compatible with mainstream peripherals.

Promote the coordinated development of the credit innovation industry chain

The significance of the establishment of unified information software is extraordinary.

In recent years, the United States has taken a series of unreasonable measures in the field of science and technology in China from time to time, such as restricting, cutting off supply and so on.

It is worth mentioning that the unified trust UOS operating system is developed on the basis of Linux operating system, and Linux is voluntarily developed by tens of thousands of excellent engineers in the world. The open source spirit of Linux has the spirit of anti-monopoly, cross-border and freedom pursuit.

Tongxin software hopes to promote the participation of large enterprises and capital with its own strength, and promote the sustainable and healthy development of the information and innovation industry by gradually establishing a unified interface standard, ecological system and technical system.

As a leading domestic operating system enterprise, unified information software will play a leading role in tackling the core technology of operating system and driving the upstream and downstream collaboration of the credit innovation industry chain.

Tongxin software is committed to building an ecosystem including domestic and foreign manufacturers and developers, and comprehensively supporting China's ecological research, development, promotion and support in the basic software industry. In the next ten years, uni trust strives to become a major global supplier of basic software and operating system solutions. 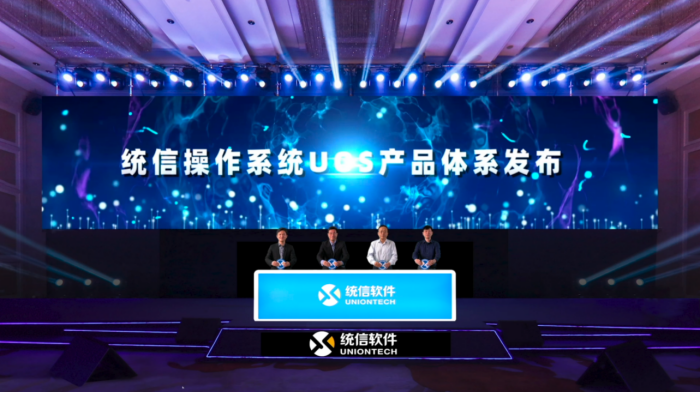