For the players who love the game, the Games in the game library must be countless. Although they can't play at the same time, the joy of xijiayi is also something that ordinary people can't realize.

But with more and more games, their hard disk space has been stretched. What should we do at this time?

It's a good choice to expand the number of hard disks, but it needs to be disassembled and installed, and it can only be fixed in the computer, and it can't be carried around. At this time, a high-performance mobile hard disk is very important. 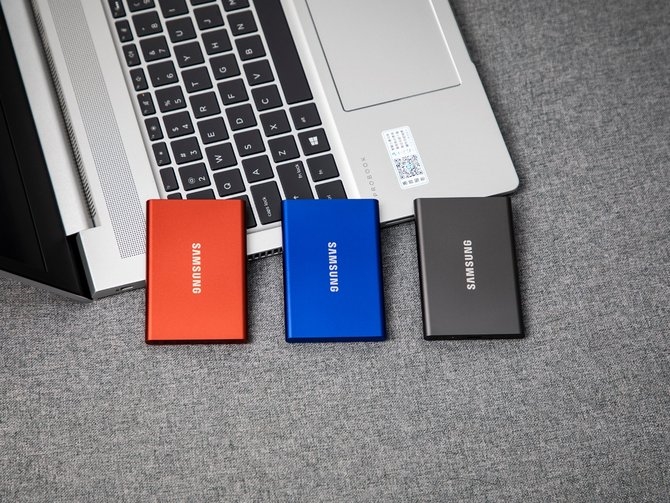 With the launch of the new Samsung T7 mobile solid-state drive, this hard disk also breaks through 1000mb / s for the first time in terms of speed, with ultra-high reading performance, allowing the game to run more stably.

For some content creators, the high-speed and large capacity mobile SSD can copy materials faster, edit video, pictures and other content in real time, and greatly improve the work efficiency.

Next, let's talk about where the new Samsung T7 mobile SSD has been upgraded. 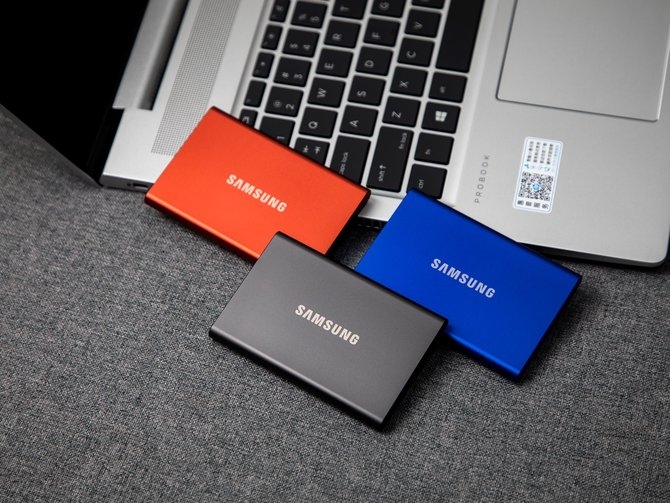 In terms of appearance, Samsung T7 has provided three color schemes for the first launch, namely, Mars red, space gray and Aurora blue. This time, we evaluated the red version;

In terms of capacity, compared with the previous T5, T7 has a capacity of 500g. In addition, there are 1TB and 2TB capacity versions to meet the capacity needs of different users. 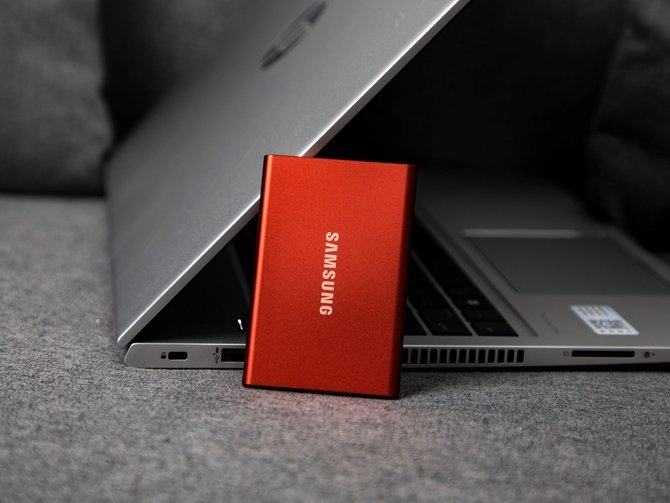 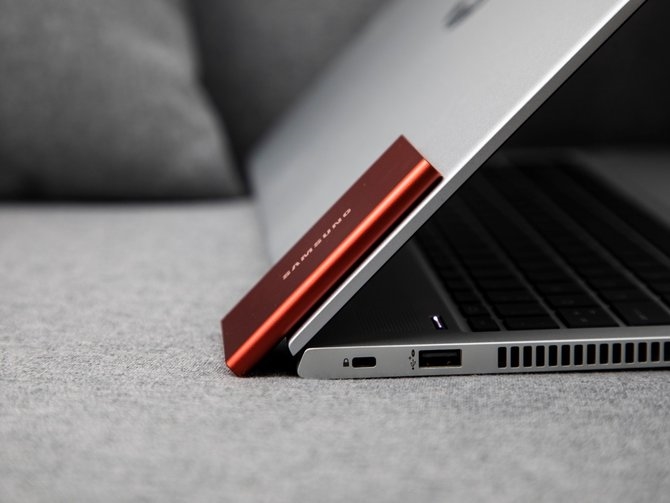 Besides,The size of the new T7 is 85mm * 57mm * 8.0mm. Compared with the 10.5mm thickness of the previous generation of T5, the improvement is very obvious, which reduces the thickness of the whole hard disk by 30%, making the hard disk more light and thin. 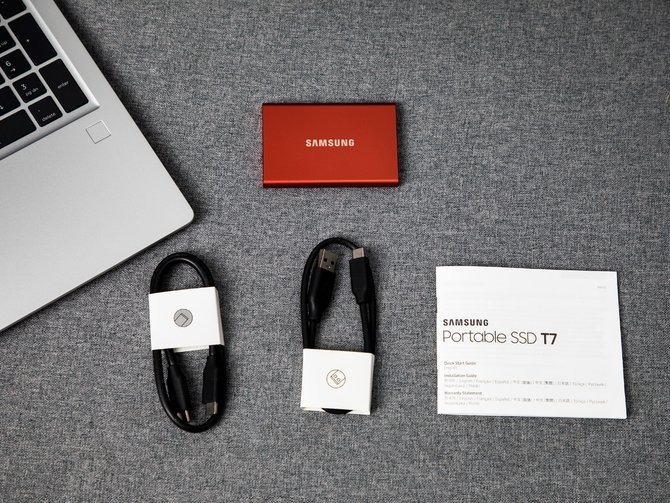 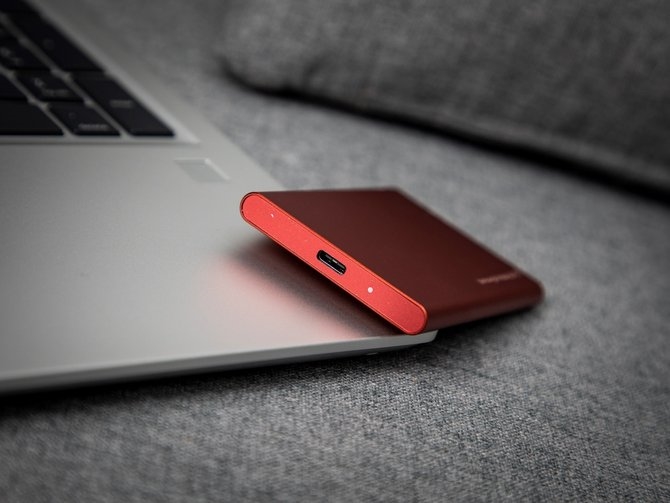 In terms of compatibility, Samsung T7 mobile solid state drive adopts usb-a and usb-c interfaces, and is compatible with Windows system, Mac OS and Android 5.0 and above mobile phones.

In addition, it also supports game consoles such as PS4 / Xbox 360 to achieve the compatibility of the whole platform. 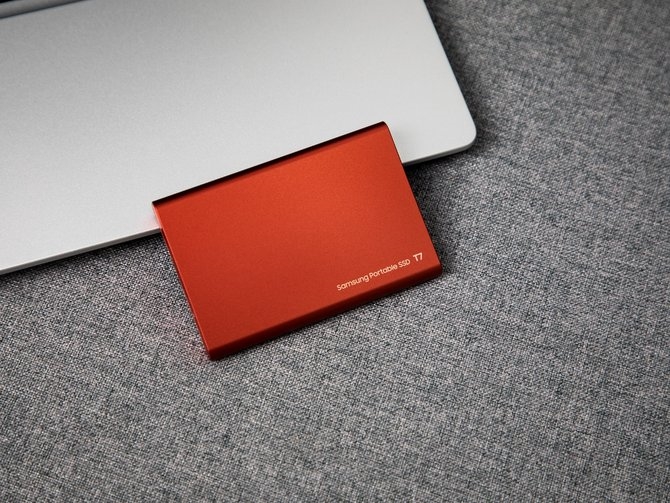 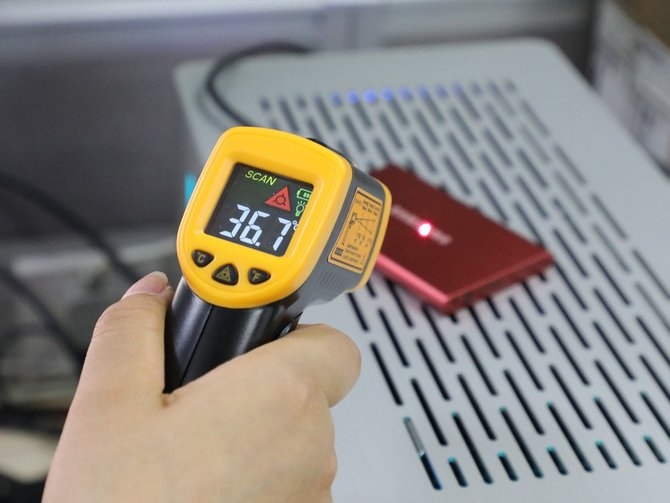 Although nvme protocol performs better in terms of speed, it also has higher requirements for heat dissipation of hard disk. During the use of Samsung T7, the temperature below 45 ℃ can be guaranteed.

This is mainly due to Samsung's use of a new EPCM packaging phase change material, which can effectively absorb heat, and gradually release the heat, thus ensuring the Samsung T7 in the best operating temperature range. 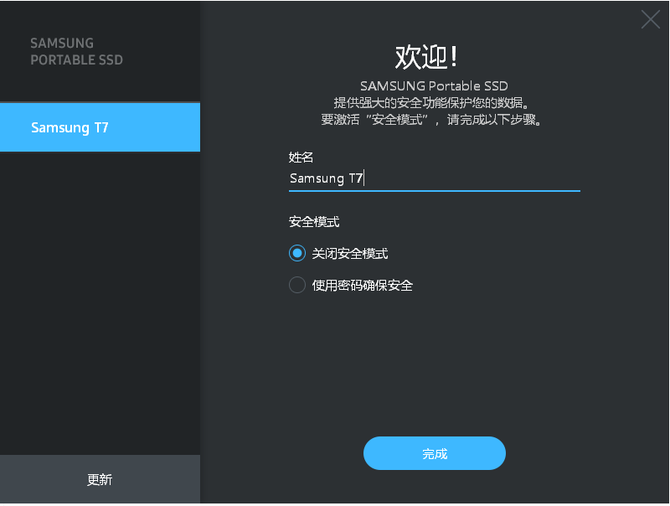 It also supports windows, Mac OS and Android,However, if you need to connect the device to some devices such as TV, game console, etc., you need to turn off the security functionOtherwise, it will not be able to read the data in Samsung T7 normally.

If there is a higher demand for security users can choose to T7Touch, fingerprint identification password, double security, to protect your data.

In the performance test part, we will divide it into two parts: software test and actual application, so that you can have a more comprehensive understanding of the real performance of Samsung T7 mobile solid-state drive. Next, let's take a look at it together! 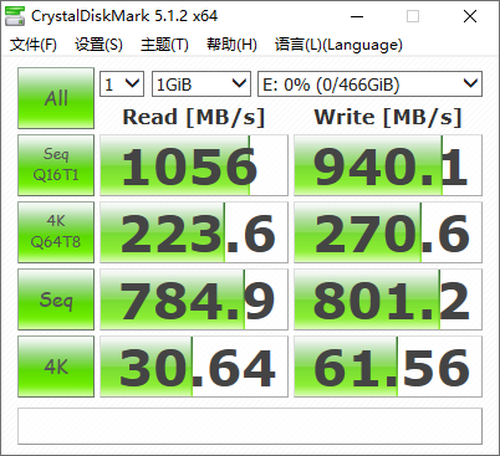 The first is crystal disk mark, which we are familiar with,Through our actual test, we can see that the sequential reading score of Samsung T7 is 1056mb / s, and the sequential writing score is 940.1mb/s,More than most of the current market performance of the mobile SSD. 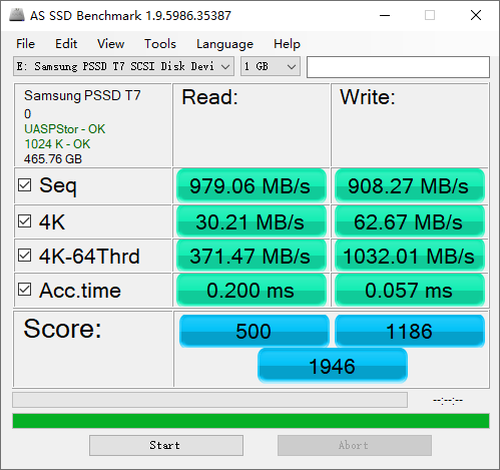 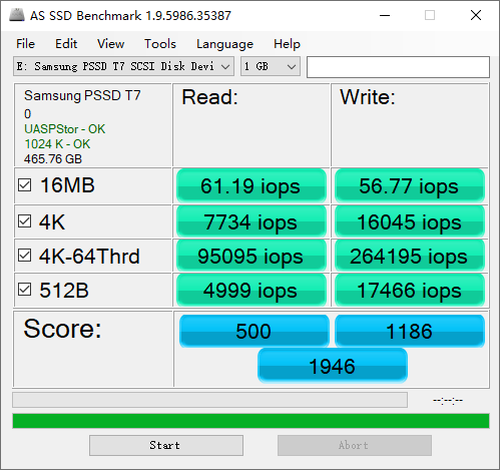 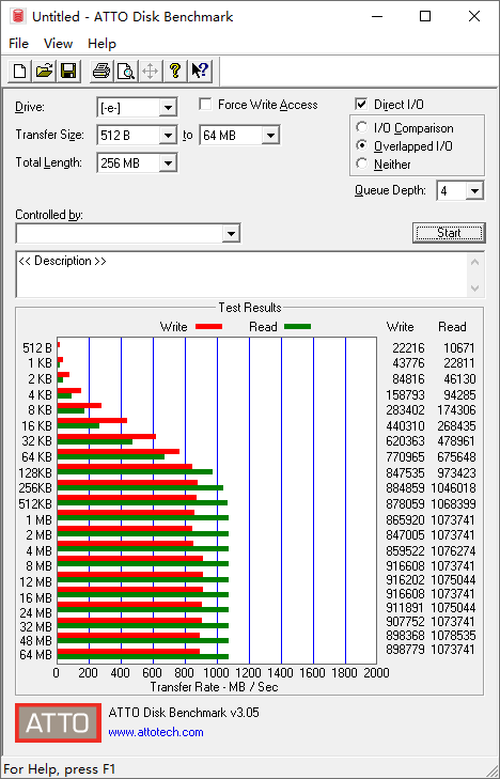 Next, we chose several mainstream 3A masterpieces on the market for game test. Before the test, we copied the game into Samsung T7 mobile SSD, and then directly ran the benchmark in the game in Samsung T7. Finally, we got the running status report of the game. The game special effects are the highest special effects. 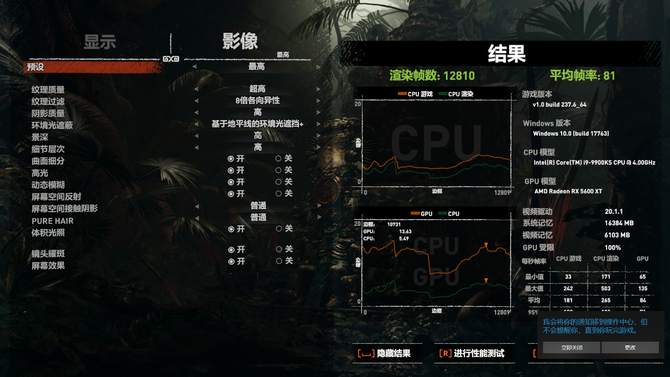 The first game is Tomb Raider: shadow. As one of the first games to support ray tracing, Tomb Raider: shadow has excellent light and shadow effects. With a richer plot, it makes the game more playable. In the actual test process, Samsung T7 has a stable performance, without the occurrence of carton, and the final game score is 81 frames, achieving smooth operation of the game Conditions. 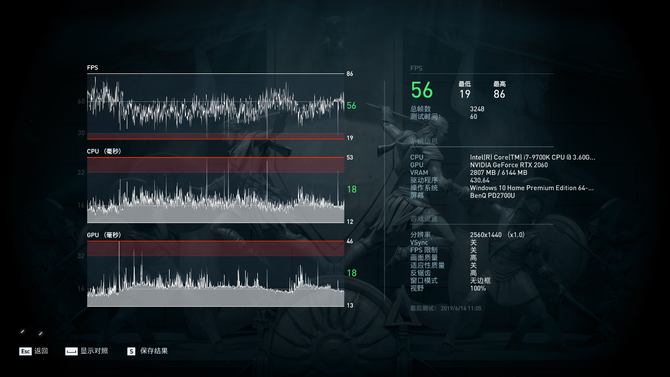 The second game is the assassin's Creed: Odyssey, we used 2K resolution in this game, and the special effect is the highest special effect. The final actual test result is 56 frames, which can basically run smoothly, and there is no jam in the process of running the game. 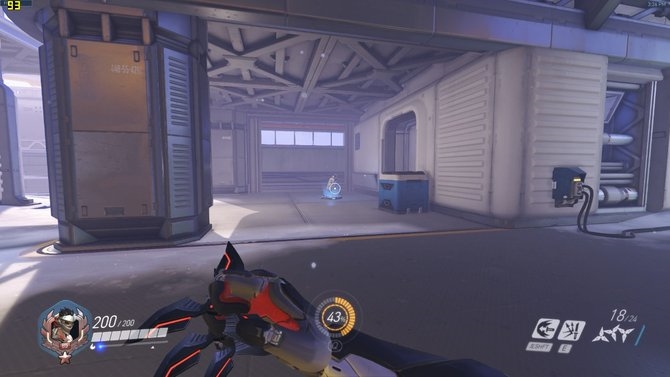 In the third game, we chose Blizzard's watch vanguard as an FPS game. The fast angle of view switching requires high reading performance of the hard disk. In the actual game operation process, the game screen does not tear the drag shadow, so it can run the game smoothly. 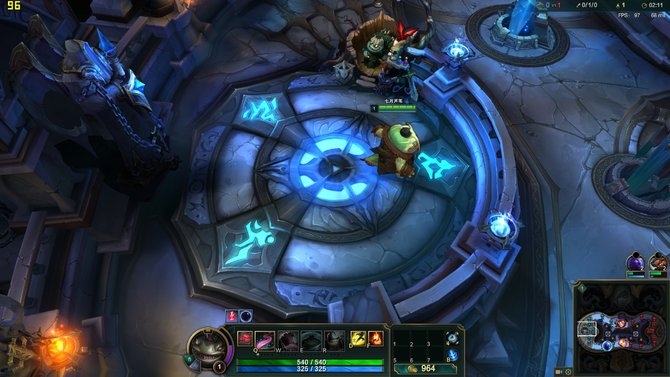 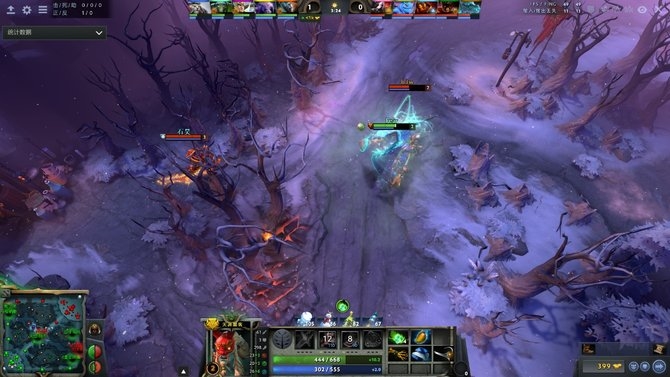 Finally, we choose two classic MoBa games, hero League and dota2. After our practical experience, we come to the conclusion that the game can run smoothly when it is put in Samsung T7 mobile solid-state drive. There will be no jam caused by the speed drop of the hard disk. The whole experience is very smooth. 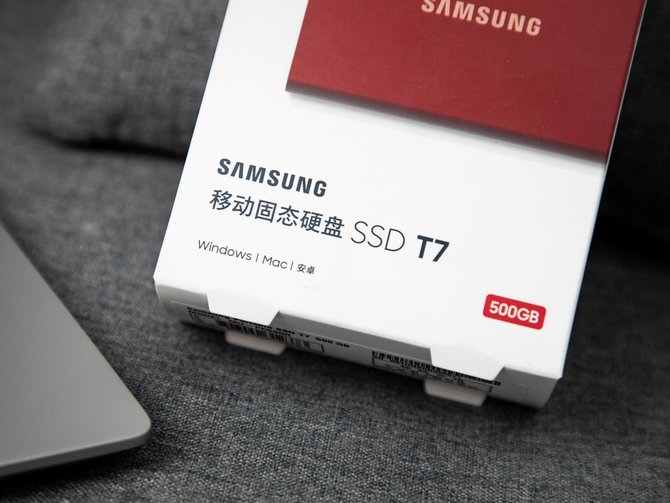 Write at the end:

As an upgrade of the previous generation of T5 mobile solid-state drive, Samsung T7 reduces the thickness of the body by 30% while maintaining the same size in appearance, making the whole body thinner.

Related news
Samsung releases new T7 mobile SSD to support fingerprint identification
Fingerprint plus Samsung mobile solid state drive T7 touch: 1050mb / s 1099 yuan
Xiaomi has a Samsung T7 touch mobile SSD on the shelf: support fingerprint identification
Samsung sells T7 usb-c SSD: entry level 500GB version priced at US $109.99
Samsung T7 mobile solid state drive: speed up to 1056mb / S
Hot news this week
Zhao Lijian responded to the British "blocking" Huawei: generalizing the concept of national security harms others and harms themselves
Zhao lijian said the UK's decision to block Huawei under PRESSURE from the US was damaging others and not benefiting itself
Tencent web drama "Beginning" Douban opening score 8.2: the male protagonist's mobile phone has become a highlight!
Samsung's new notebook patent publication: the keyboard is divided into two-quarters after two folds.
AsiaInfo Technology Announces Acquisition of iResearch Consulting to continue to increase digital operations and digital and intelligent transformation
Canon China plans to close some production lines in Zhuhai in response to the zhuhai company's suspension of production
Breakthrough: Chinese scientists have discovered and confirmed the boson exotic metal for the first time
Volkswagen's sales in China plummeted, a record low in 8 years! The CEO revealed the reason for the helplessness
Only 2 decisive headphones Class A Certification of the Ministry of Industry and Information Technology? Perhaps it is misunderstanding
1KW electric energy production 3KW heat Tesla hot pump low temperature hidden dangers were investigated
The most popular news this week
China's groundwater resources reserves are identified for the first time: the southern freshwater reserves account for only 5% of the country's total
Microsoft Gaming Executive: Had a friendly call with Sony management
The United States seeks to contain scientific giants Google 2021 year tour spending increased by 13 million yuan
QQ Music ranked third among the world's most popular music platforms
IPHONE open side load? The US Senate Group has approved the bill to vote
钛媒体科股早知道：价格创十年新高，需求占比或提升5倍以上，特斯拉全球出击疯狂抢占该资源；国家卫健委研究出台更多积极生育支持措施
Take stock of Microsoft's top ten acquisitions: 3 of the more than 10 billion US dollars Nokia is not in the top 5
Deposit time coin pension, what is the upcoming "time bank" in Beijing?
Performance losses exceed 400 million, had been saved by Plum Qi "women's shoes first shares", give up selling shoes
Dong Xiaodian announced the shuttlecock, social e-commerce style encountered life and death