Microsoft is expected to launch the surface duo later this year with snapdragon 855, 6GB memory and 11 megapixel camera. Because the design of the new machine was finalized earlier, Microsoft chose the mid tier specification and affordable chipset.It is described that the surface pen used with surface duo will bring a very natural experience. The reason is that Microsoft developers have put a lot of effort into Android input stack to make touch and pen connect seamlessly between screens. 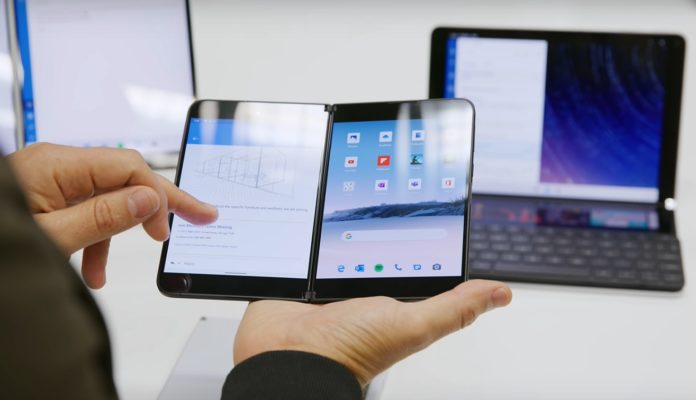 This enables the surface pen to respond naturally under different pressures and when you drag operations from one screen to another. It also adds gesture operations provided by the system, such as double clicking to capture screenshots or performing a quick click to open Microsoft Outlook.

This sense of naturalness comes from the fact that there is no lag when two Bluetooth devices are used together, or the delay when drawing pictures on two screens at the same time is eliminated as much as possible. Without lag and improved Android input support, the experience will be more natural. For another example, when the drawing application spans two screens, the stylus will work between the two screens. The improved system will not let you feel that you are sliding the surface pen between two different screens. Microsoft has also submitted plans in the chromium platform to improve the web browsing experience of surface duo and other products when using stylus such as surface pen.

The surface duo runs Android 10, which Microsoft is said to launch shortly after it launches Android 11 later this year. In early June, the pre installed applications on the surface duo will undergo a round of optimization to take advantage of the dual screen design.

Related news
What is the experience of Microsoft releasing folding screen Surface Duo: rumors to come true?
Home 32 days Microsoft president show double screen surface with cute baby: praise change everything!
Microsoft is back in the mobile market! Surface duo running Android is expected to be released this year
The big update of Microsoft's surface: the surface Book 3 is coming, and the new noise reduction headset
Microsoft Surface duo brings improved stylus support for Android system
Microsoft's return to mobile phone market
Microsoft is back in the mobile market! Surface duo coming soon: see you in August
Hot news this week
Wechat has not done this function for N years! Use this app to make up for the defects of wechat
Gree's response to "being disqualified from winning the bid": a mistake made by the bidder in sorting out the materials
IPhone 12: it's more like throwing away the charger
Apple wants to know: what do you do with the charging head of the old iPhone?
Microsoft official free data recovery tool windows file recovery experience
Luo Yonghao comments on ideal one: Tesla Model 3 is not a car of a level at all
Tencent magic change Yang surpasses video self mockery: I'm a simple and honest fake spicy sauce lost 16 million
A 400-brand evacuation Facebook： the internet giant strangled?
How long can "Laoganma" carry on after winning Tencent?
The dotcom bubble? U.S. technology stocks surpassed their 2000 highs relative to the S & P 500
The most popular news this week
What does Huawei mean to Chinese semiconductor?
Tencent send welfare: BOC switch users can download this game for free
Begin menu UI big change! Windows 10 21H1 new edition
NVIDIA involved in the "anti-sexual harassment campaign" in the United States: more than 150 people involved
Share the first share of power bank: small power rush to gem, Tencent shares nearly 10%
Baidu Linyuan leaps: great strategic determination is needed to adhere to the core technology innovation in the end
Cellon 865 Plus 120Hz millet 10 super cup fast: price straight to 6000 yuan file?
Americans try to disinfect borrowed books with microwave, and the library posts for mercy
Samsung and research team found a new semiconductor material: amorphous boron nitride (a-bn)
Operation of the mystery: the Internet Archive is regarded as the CDN of JS file by the Bank of Barclays