In theory, the new measure will allow users to keep their devices in a satisfactory state, rather than forcing Microsoft to install new designs or features. Most drivers will still update automatically (you can choose not to), but Microsoft says the optional updates section may help if you encounter any problems. 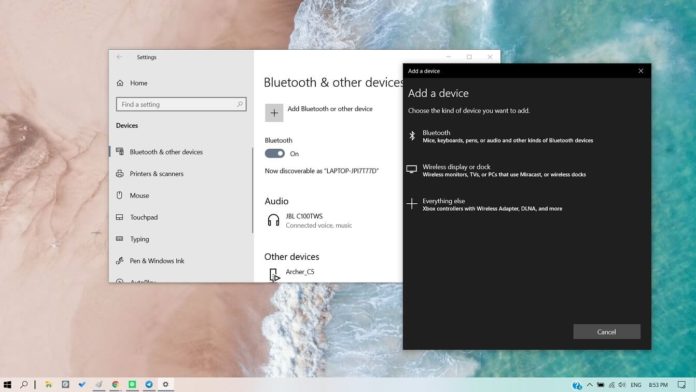 In fact, as early as in the era of Windows 7, Microsoft desktop operating system has supported this feature, but windows 10 platform has long lacked support for this feature.

It is reported that audioplaybackconnection is used to enable / disable the creation of a remote device connection, but users can also use wired headphones connected to a PC as a remote audio source.

It should be noted that the Bluetooth A2DP receiver function is disabled by default and needs to be managed by the application responsible for remote audio streaming.

The "cloud reinstallation" added in Windows 10 2020 is equivalent to an automated system installation. It saves the process of making the boot disk and downloading the image file, and is automatically completed by the operating system, which greatly reduces the operation difficulty of system maintenance. In general, this new function of windows 10 is still very practical, saving the download process and good operation experience. The only regret is that the application needs to be reinstalled, and the start menu layout will automatically return to the default. Of course, this step can be solved through subsequent cloud synchronization, but At least it's still far away!

During this feature update, Microsoft fine-tuned the disk usage of the Windows Search indexer to address the high disk usage caused by the radical indexing process.

Microsoft said that windows search can now better identify peak usage times and manage indexers accordingly. Based on our tests on real hardware and virtual machines with different configurations, our test results show that this is true. If your computer is equipped with HDD mechanical hard disk, the windows 10 may 2020 feature update will actually feel faster. 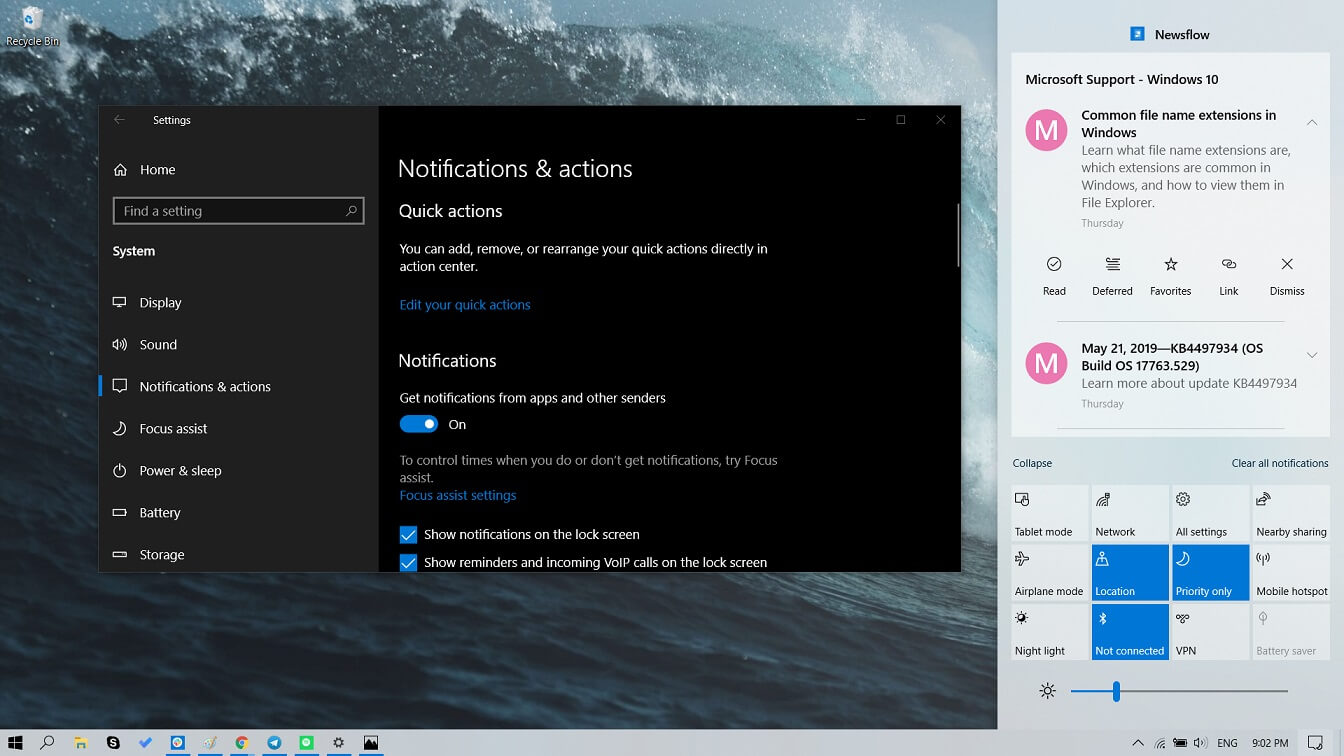 Windows 10 version 2004 also throttles or completely stops any indexing activity when you are transferring files, deleting files, and your SSD or HDD disks are actively in use. Windows search's ability to throttle index activity will avoid this slowdown on SSDs and HDDs.

Windows 10 recommends maintaining a network connection at all times during daily use, while updates and the Microsoft Store will consume your Internet data.

The slow network connection has brought various disadvantages. Therefore, Microsoft has introduced delivery optimization function to allow users to limit the update and bandwidth of Microsoft mall in a percentage way. In the windows 10 may 2020 feature update, Microsoft allows users to set the absolute value of bandwidth. 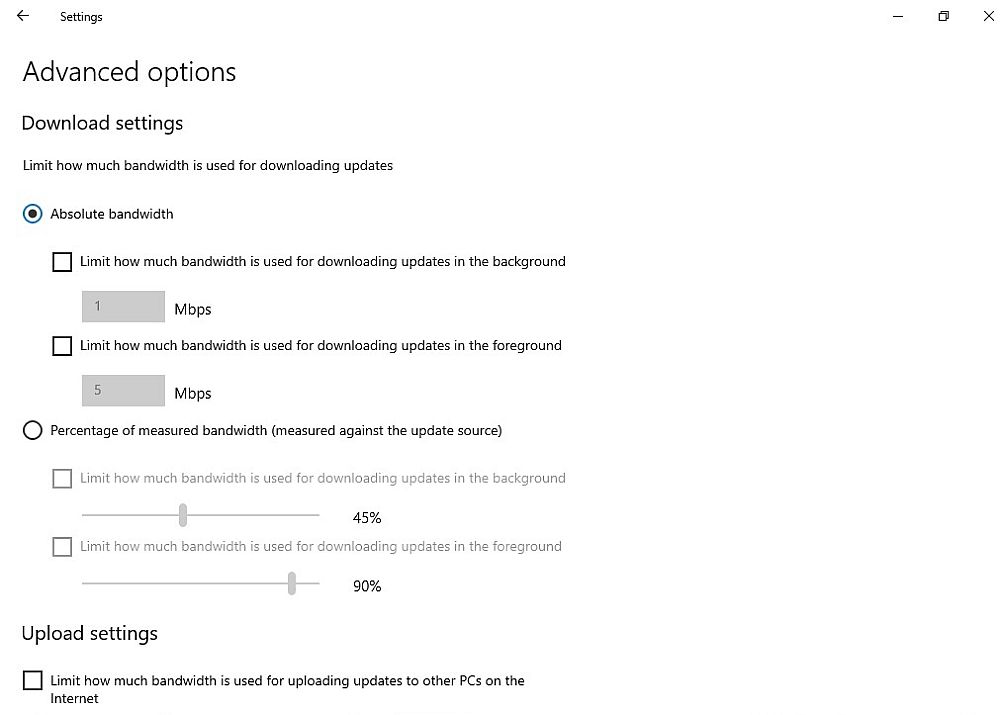 New transport optimization options will give you more control over your network connection, allowing you to control how Windows Update and windows store should use your Internet connection to download updates. In Windows 10 version 2004, you can set an absolute bandwidth limit to ensure that windows update, Microsoft Store and Microsoft products will not occupy your Internet connection due to their background downloads.

If you set an absolute value for bandwidth usage, windows update will not attempt to use all your bandwidth / network connection speeds. Instead, it will try to dynamically optimize the amount of bandwidth it needs, and windows update / Microsoft Store usage will not exceed the value you set. The new transmission optimization settings also apply to app store updates and other Microsoft product updates.

In the May 2020 feature update, task manager can identify your disk type (SSD or HDD), allowing users to identify the storage hardware in the current system. 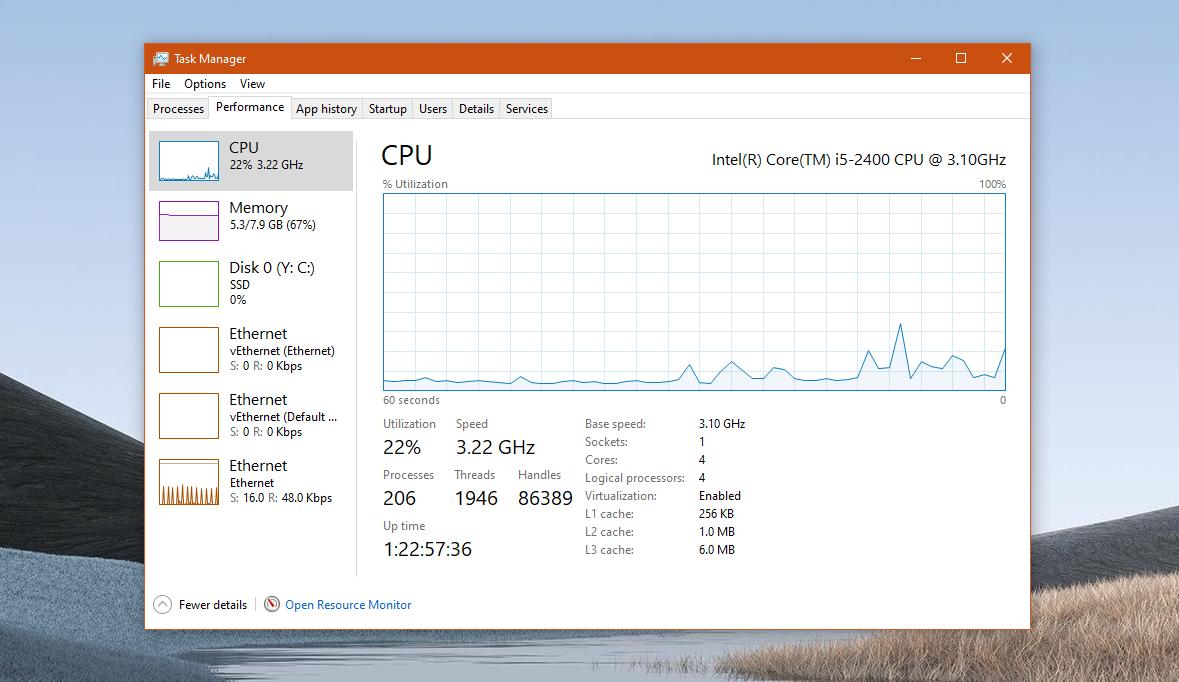 Microsoft introduced a new feature in the windows 10 may 2020 feature update to make it easier for certain displays to use the system. This feature allows the user to remove the display from the windows desktop, meaning that the start menu, error messages, and desktop wallpaper are not displayed on the page. 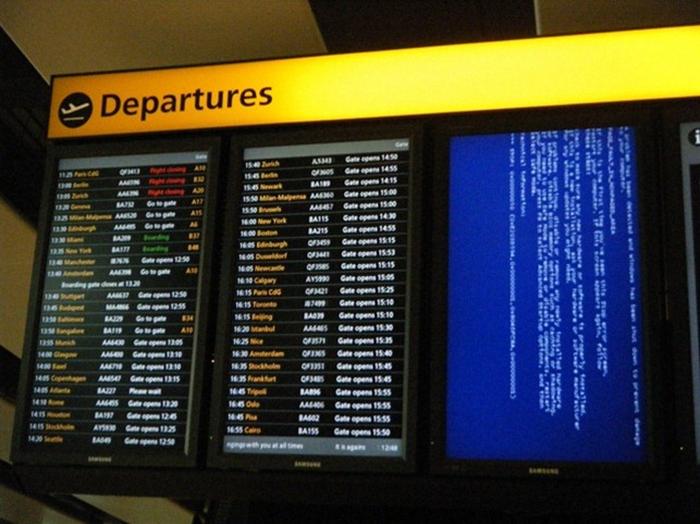 This feature applies only to Windows 10 enterprise and Windows 10Pro workstations, and to enable it, you need to ente 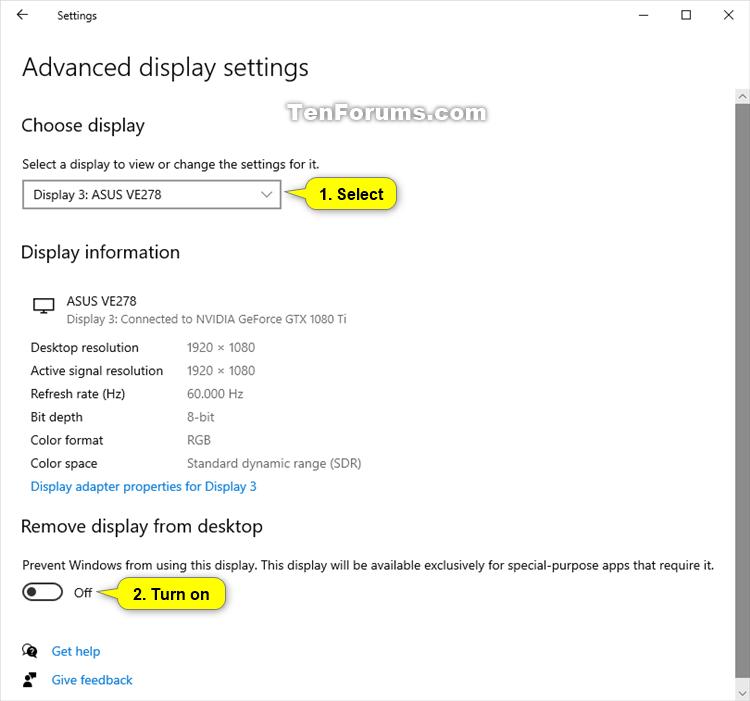 users can access not only Emoji expressions but also Kaomoji and certain special characters by WIN (full stop)/ semicolon) keyboard shortcuts. During the latest release, Microsoft expanded its list of Kaomoji based on user feedback and added favorites. 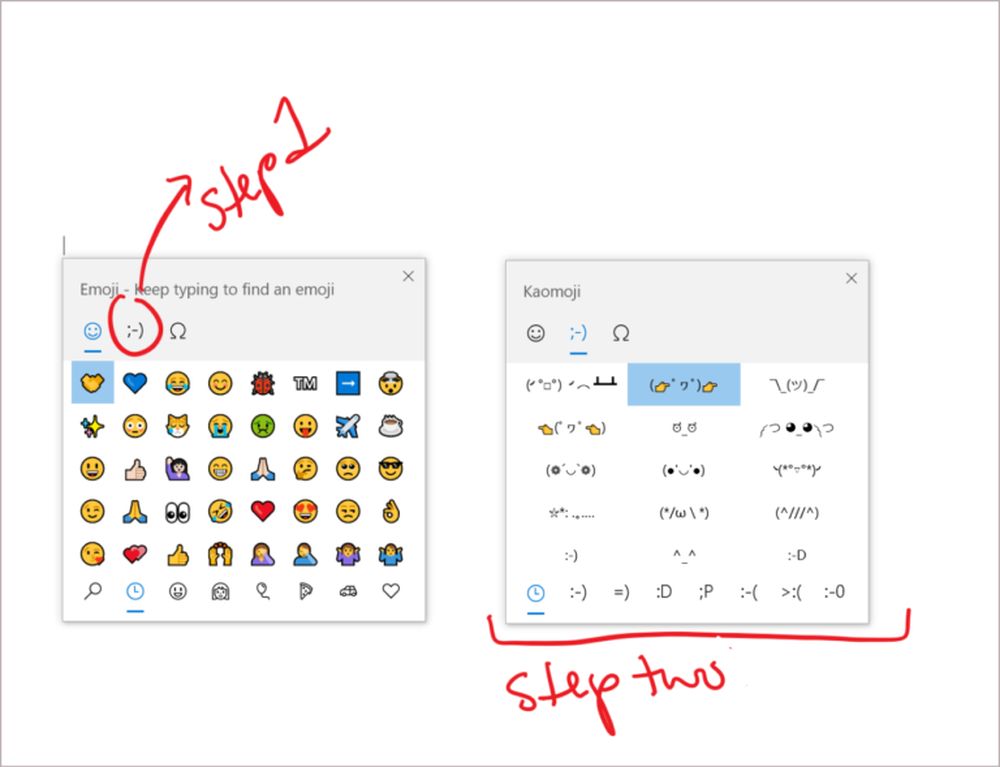 This set of shaders can appear in any stage of ray tracing operation, support indirect execution of ray tracing, and introduce inline ray tracing to manage ray traversal algorithm and shaders. Windows 10 V2004 optimizes the password free login experience. Under the "settings account login options" tab, you can see the newly added "need to log in to Microsoft account through windows hello" option. This function allows users to decide whether to enable windows hello (fingerprint, face, iris, pin, etc.) to log in to windows 10 system according to their own conditions. Microsoft provides search, pairing, configuration, and live streaming capabilities for camera vendors in the market that are compatible with the main onvif (leading open standard for webcams) profile s. With this support, developers can now focus on the actual application, rather than on a camera specific driver or middleware.

MacOS has a function that can automatically start applications that have not been shut down before after restarting the system. Windows 10 V2004 has added this function.

In "settings account login options", you can see two newly added options, corresponding to "restart uwp applications" (automatically save restartable applications when you log out and restart them after you log in) and "restart desktop programs" (automatically complete device settings with my login information after updating or restarting). After the function is turned on, windows 10 will automatically start the programs that have not been closed before when logging off and restarting the windows system, so as to facilitate the user to quickly continue the previous work.

Virtual desktop supports renaming, which makes it easier for users to arrange different desktop tasks more intuitively. At the same time, the right-click menu will synchronize this change, making the operation logic clearer. New two in one computer experience

With the launch of windows 10 20h2, Microsoft said it would launch a new tablet experience for two in one convertibles. In the new tablet mode, the taskbar icon will be separated and the search box will be converted to an icon. At the same time, when the user taps the text field, the touch keyboard can be called out. The May 2020's optional features include three new applications, drawing, notepad and writing board (WordPad). The three apps won't disappear from the Windows 10 system, but users can uninstall and use apps such as Paint.NET and Notepad. The data usage part is very convenient for those trying to better manage their Internet connection, especially when their usage is limited.

Related news
Three ways to upgrade Windows 10 May 2019
Windows 10 May 2019 starts full push Manually check for updates to upgrade
RTM Windows 10May 2020 Experience Report: Finding Three Important Things
Windows 10May 2020 information summary: release time, new features, etc .(figure)
Windows 10 may 2020 is expected to meet you next week (Figure)
Get ready: Microsoft starts to push windows 10 may 2020 updates "step by step" this week
Windows 10 may 2020 ready to launch: inventory of major new features (Figure)
Windows 10 may 2020 removal features list: windows to go, Cortana consumption level skills, etc
Lenovo released a notice acknowledging that windows 10 may 2020 causes many problems (Figure)
Windows 10 may 2020 update no longer pre installed the connect app by default (Figure)
Hot news this week
"Used car salesgirl" appeared on the webcast platform: netizens were angry because of their exposed clothes
Xiaomi intelligent clean ecological chain enterprises to pursue technology to complete 3.6 billion yuan C round financing
Microsoft CEO NADELLA is most concerned about three things: ubiquitous computing, AI big model and virtual online
Alibaba Cloud released a new operating system "Dragon Lizu" secret research and development 10 years anger 20 billion
Jia Yueting is paying back the money again! Faraday's future former employees in China receive a pay rise
Internet users ridicule this year's "Double 11" : Taobao "collapse", promotional text messages bombarded, still do not understand the rules
Huawei SEMICONDUCTOR Manufacturing International received export licenses worth hundreds of billions of dollars from the United States
Ping An Bank's net profit rose 32.5% in the third quarter, Xie Zhiyu crazy reduction, Zhang Kun is a big buy
Documents show that Huawei SMIC received export licenses worth hundreds of billions of dollars even after being blocked by the United States
The storage chip faucet is 119 times the first three seasons, the chairman reporter is born, "cattle scattered" did not lose the position.
The most popular news this week
83.83 billion! China's telecom giants did well: net profit jumped 115.8%
Tmall double 11 mad super red envelope: up to 8888 yuan a day
In the first half of the screen, "Breaking Bad China" launched a double eleven special series: forget the explosion, leave a name era
Payment company PayPal responded to "proposed $ 45 billion acquisition of pinterest": no such plan
Korea Telecom KT responds to a national outage: network path settings are wrong, rather than being hit by a large-scale DDoS attack
The Economist: Samsung bets on the most advanced logic chips, but risks lurk
Android 12 rollover! After the user updates, it indicates that the system crashes, the battery life shrinks, and there are too many bugs
Litchi podcast will be on the line Huawei Hung Mengchang
New version finds problems Tesla temporarily withdraws version 10.3 of its fully autonomous driving system
"Lack of core" to dark hour has passed the construction of automotive chip industry ecology is the general trend