Where will Intel / AMD go in the future? It's all here

With the release of Intel Comet Lake-S, their competition with AMD in the CPU market has fully entered the next stage. At present, neither company has clearly announced the next product direction, but it is necessary to organize for everyone from this year to the following year, that is ,2022 CPU road map.

This paper is based on a variety of information, leakage summary.

Intel side: Rocket Lake and Tiger Lake will support next yea

Intel is currently at an obvious competitive disadvantage due to the drag of process technology. However, Intel, a big company, will continue to update according to the original road map. At present, the next generation architecture disclosed has tiger lake on the mobile side. 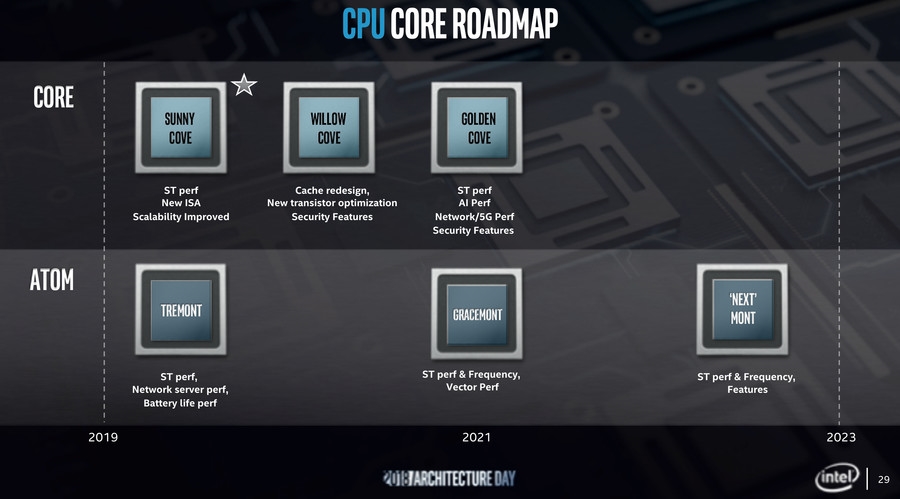 On Intel's 2018 architecture day, they released the roadmap of the core micro architecture in the next few years. We can see that willow Cove will have three major changes compared with sunny Cove: cache redesign, new transistor optimization and security features. The first point we have seen in the identification of various test software is that tiger Lake's L2 and L3 are significantly larger, the single core L2 cache is enlarged from 512KB to 1.25mb, and L3 is also increased to 3MB per core.

On the desktop side, Intel plans to launch a generation of rocket lake that still uses the 14nm process to complete the upgrade of the core micro architecture. The long stagnant IPC of Intel Desktop processor will finally be upgraded. However, there are two versions of the specific core micro architecture used by rocket lake, one is sunny Cove, the other is willow Cove, no matter what, it's good to have a promotion.

According to the current situation of various leaks, the power consumption level of rocket lake-s will still be at a very high level. After all, no matter sunny Cove or willow cove, its core is larger than one size. Because the area occupied by a single core is larger, in order to ensure the output and yield, the desktop level rocket Lake-s will limit the maximum number of cores per processor to eight.

Tiger lake will be officially launched later this year. We expect to see a lot of new notebooks using tiger Lake platform by the end of the year. And rocket lake-s will come on stage in the second quarter of next year if there is no accident, replacing the current comet lake-s.

After alder lake, a generation of meteor lake has appeared in Intel's current driver files, and it is believed that it will use 7Nm technology.

Amd side: Zen 3 and various apus

AMD new product is clear, and the next product they're about to release should be an upgrade of the frequency of Matisse Refresh, current hot-selling Zen 2 processors that are believed to have XT model suffixes. Then there's the desktop version of the Renoir processor, which may come on stage with Matisse Refresh, or at some point later. 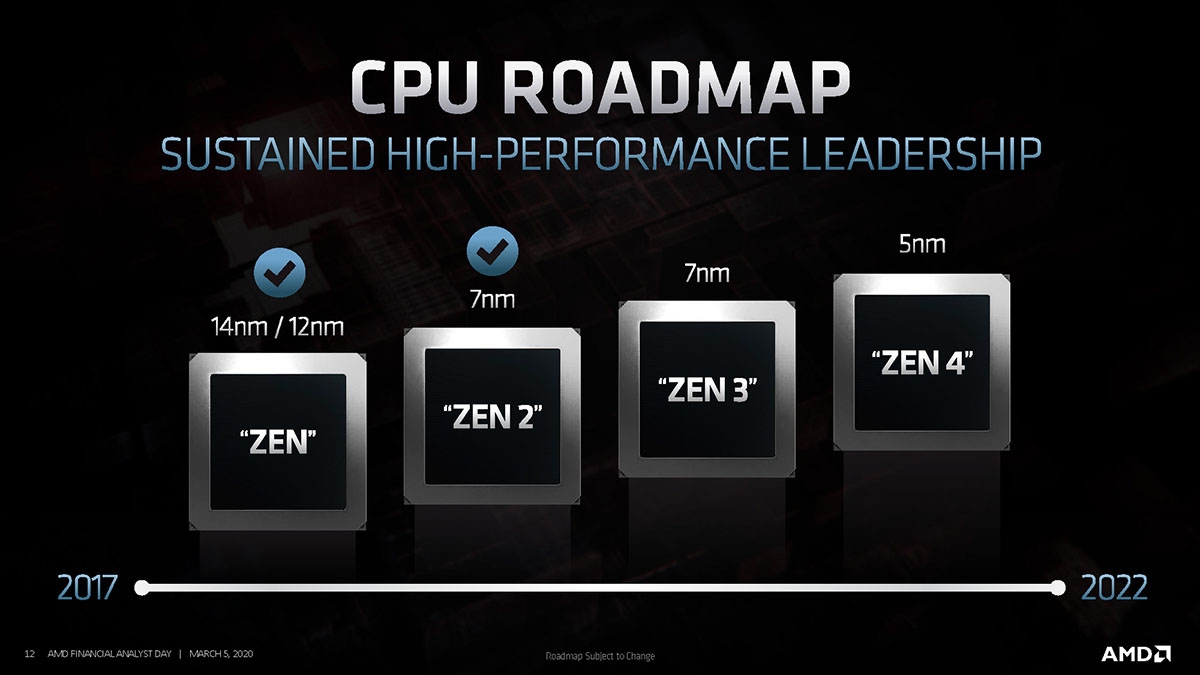 The above two series do not exist in the official data of AMD. Only the Zen 3 architecture and the schedule of the new generation of processors are available in the public data. It can be seen that this year, AMD will launch a new generation of Zen 3-based processors, code named Vermeer. At present, we can learn from various channels that Zen The single thread performance of 3 will be improved by two digit level, which means that it is certainly not only as simple as changing a CCX structure, but also the kernel microarchitecture will be greatly upgraded.

Let's talk about the layout of AMD in the mobile market. Recently, there is an integrated table for AMD's future processor roadmap. Let's see, the data comes from @ Komachi_ ENSAKA： 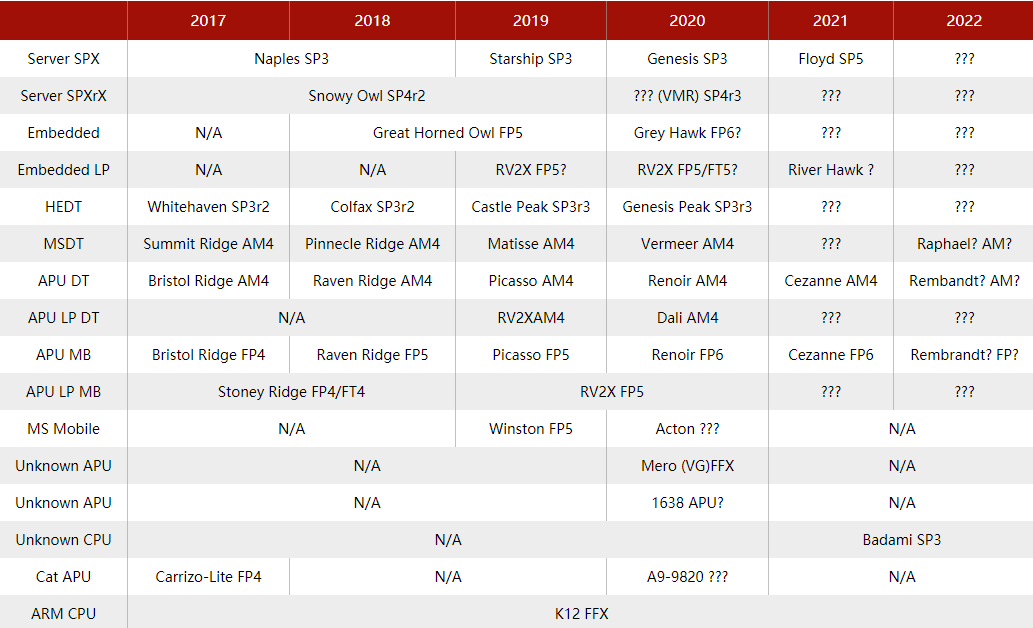 What will be useful to us in this form is next year's layout on MSDT and APU. You can see next year's AMD layout called Cezanne and then a new code-named Rembrandt. But the form doesn't indicate exactly what structure they' ll use, but we've got the latest news from anonymous sources.

Cezanne will use a Zen 3Vega 7 combination instead of the rumored RDNA 2, it will continue to use tsmc N7 process, as with Renoir, it will have both low voltage and standard voltage versions.

AMD also plans a processor called Van Gogh( van gogh) at ultra-low voltage, which is like a lean version of a PS5、Xbox Series X custom processor, with the same Zen 2RDNA 2 architecture, but TDP limited to 9 for lightweight mobile devices. 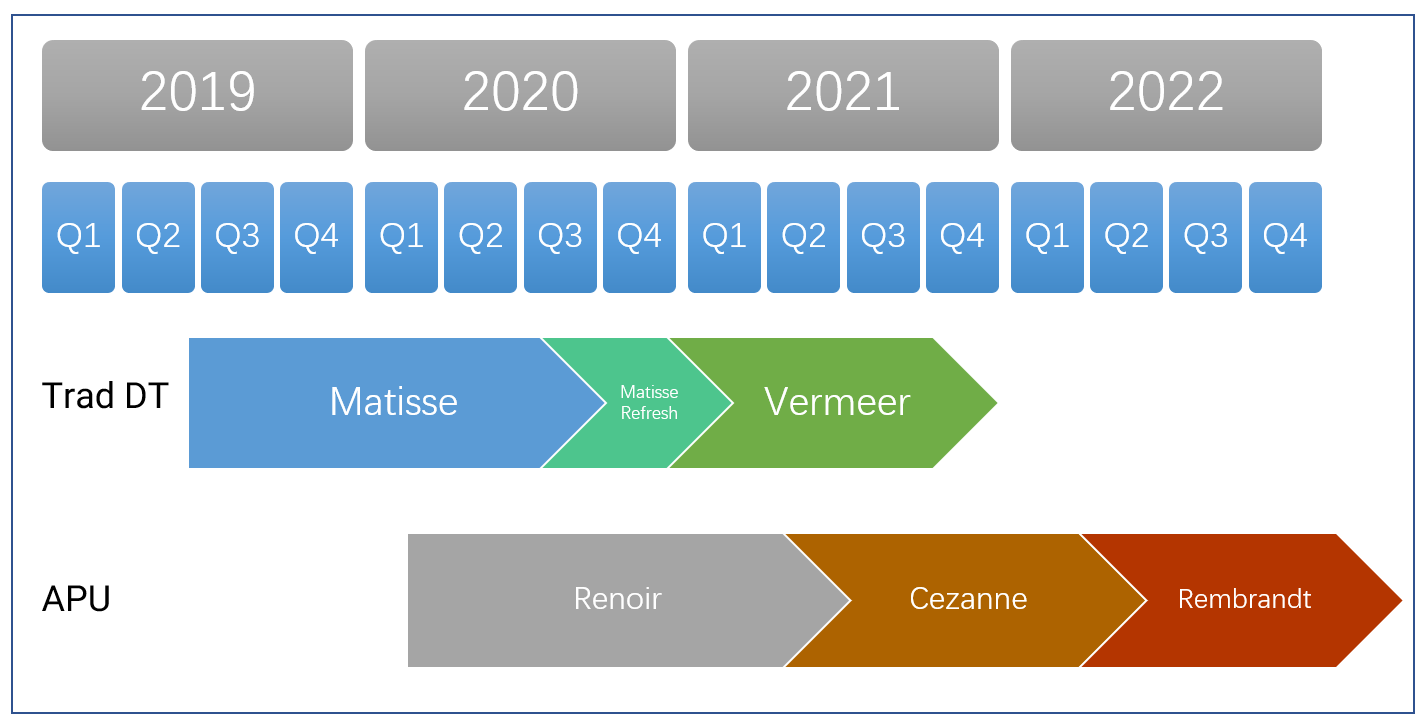 If a roadmap is used to simply represent the layout of AMD on the desktop CPU and APU, this can be the case, but there is no guarantee that the time point is correct.

Unsurprisingly, in the CPU market over the next two years, Intel will experience a relatively weak period. Too late they decided to put the new kernel on a desktop processor, so that their desktop processors aren't going to be dominant at the same frequency. How much Rocket Lake-S can be recovered is still unknown, and in the mobile market, it's a mystery whether the Tiger Lake and the optimized 10 nm processes can make the energy consumption better than it is.

AMD's implementation of the roadmap is better. We should see Zen 3 processor at the end of this year. With Renoir's successful foreshadowing, more manufacturers will choose to use APU in the mobile market next year.

Related news
Where will Intel / AMD go in the future? It's all here
AMD valuation is Intel? far higher Mother Su changed her life!
Yes! Intel and AMD processors are widely available
NVIDIA, amd merger and acquisition: Intel data center suffers double attack
Intel and AMD's tortoise and rabbit race
Intel, amd motherboard model chaos: look at this picture can distinguish
Experts say: there will be a price war between AMD and Intel sooner or later
+2349031459947 ## Where to do money ritual in Nigeria....
Hot news this week
Apple store staff committed suicide due to work pressure?
Xiaomi has issued a patent for autonomous driving, which can automatically adjust its driving ability according to the road class
U.S. inflation blasts Nearly half of households aim to live: the price of the commodity has gone up outrageously
Jiangsu Bank's Beijing branch was fined 4.9 million for "seven crimes" involving the illegal issuance of loans
Huawei has released a patent on the packaging structure that solves the problem of black spots on display panels
More than 20,000 domestic Model Y "broken shaft" recalls Tesla's ability to dump pots surprised netizens
Alipay announces automatic identification of automatic identification of vehicles to enhance the quality of drivers
Browser Search Engine Giants Quasi-Upgrade Microsoft to issue an unsafe warning to 2 billion Chrome users
Could new SEC rules prevent Chinese companies from listing in the US? The Foreign Ministry responded: firmly opposed
The U.S. blocked Avista's acquisition of chip giant ARM, fearing it would hurt competition and neutrality
The most popular news this week
AMD YES! Musk praises Tesla's 'Witcher 3'
Standard Snapdragon 8 Gen1! Exposure millet 12 Pro released this month: screen specifications are higher
A Japanese billionaire has flown to the International Space Station on the most expensive charter flight in history
US group public bag app: system network abnormal recovery rider can be delivered normally
Visa CFO: The company can solve the problem with Amazon, and the relationship will resume as it did
Yumei Technology responds to employees: there is cash compensation and option compensation, and the company operates normally.
Abandon ARM! Huawei's all-self-research chip announced: new architecture CPU plus holding
It is 200 million to learn Tesla Volkswagen will be involved in clean energy construction.
TNGA + hybrid! Toyota's flagship Sedan in China looks a lot like a Lexus
Liang Jianzhang: The real universe will certainly prevail over the meta-universe, which may bring population risks and technological stagnation