Before the launch of Galaxy M01 in India, the specifications of Samsung Galaxy m01s model have also been exposed by geekbench benchmark database and Wi Fi alliance.According to the plan, the former will land in the Indian market in June with Galaxy M11, and the expected price is below 15000 rupees (about 1417 RMB). As for Galaxy m01s, its model codes are sm-m017f and sm-m017f / DS, indicating that it may have two versions of single card / dual card and dual standby. The configuration of galaxy m01s should be slightly enhanced on the basis of Galaxy M01. The geekbench benchmark database has listed the pre installed version of Android system, ram and onboard storage capacity of the new machine.

The Wi Fi Alliance said it would support dual SIM cards and a single 2.4GHz wireless network. The single core / multi-core score of the machine is 747 / 3526, equipped with 3gb storage and pre installed with Android 9.0 mobile operating system (it is expected to upgrade to Android 10 when it is released). 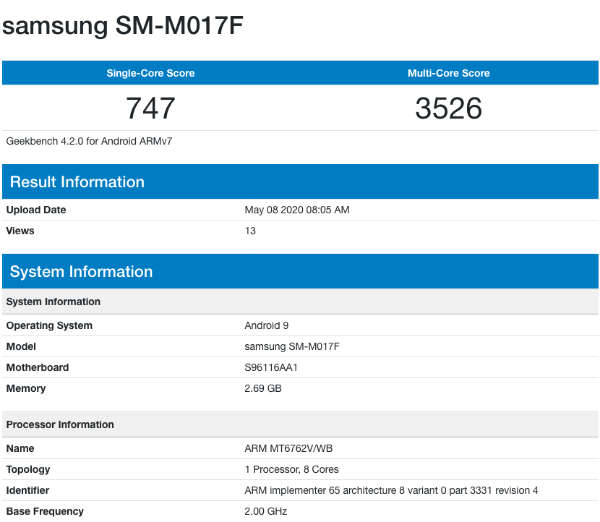 On the chip side, it uses the eight core @ 2GHz MediaTek mt6762v SOC (also known as Helio P22). Unfortunately, no other details about Galaxy m01s are known.

Reference Galaxy M01, The machine is equipped with a 5.71-inch HD TFT display with a resolution of 720×1560(aspect ratio 19:9) and a water droplet bang for the front selfie camera. 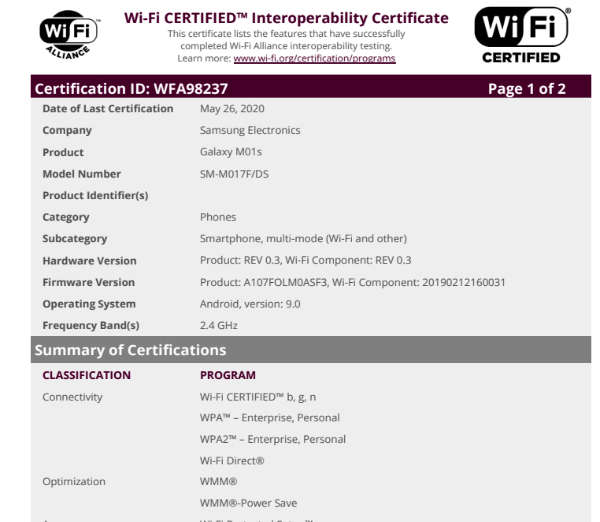