To catch up with Slack、 sniper Zoom, Microsoft Teams is such a successful counterattack 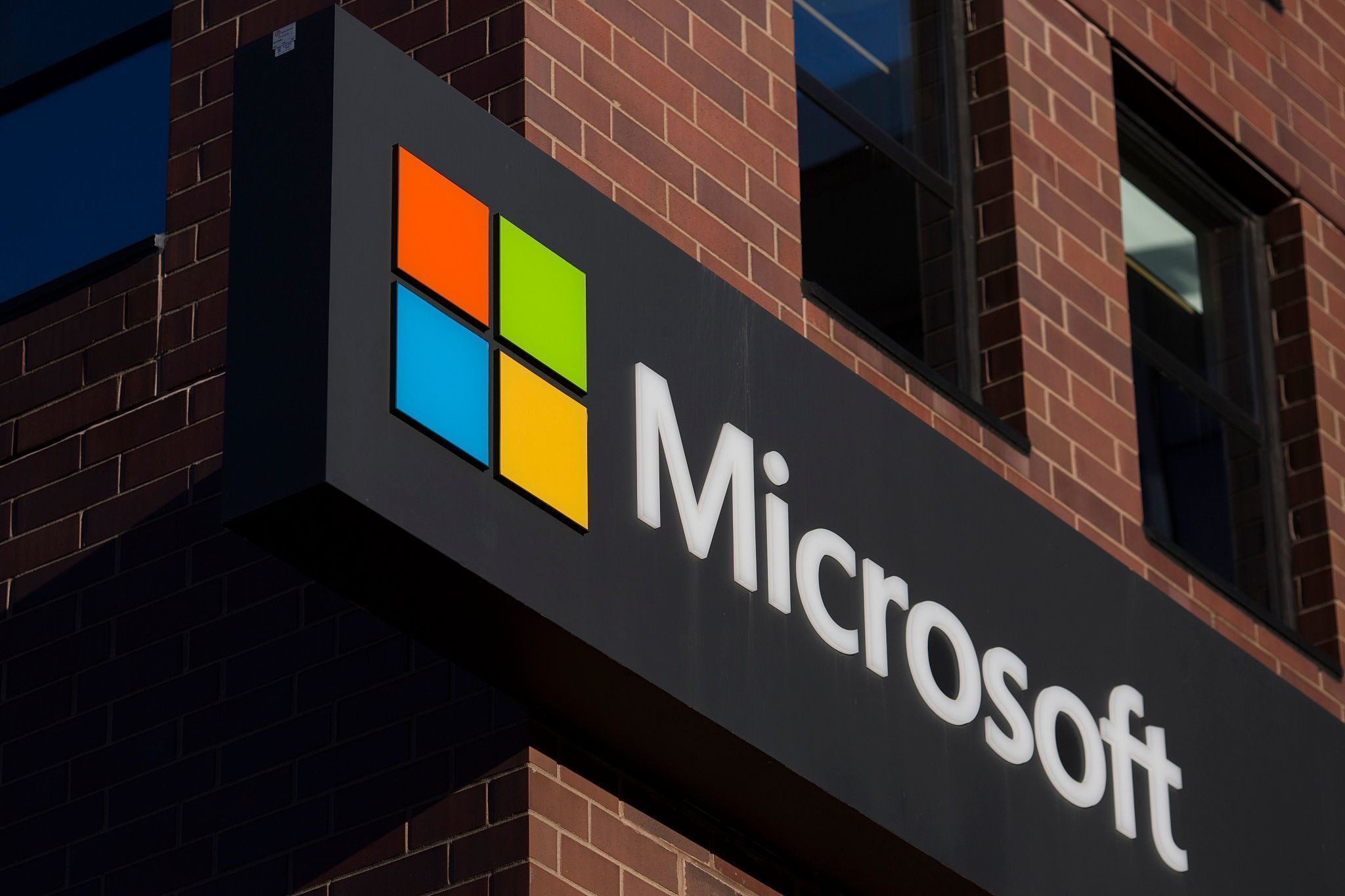 The competition between Teams and Zoom is far from over. When Teams try to penetrate into each other's hinterland, Zoom also begin to enter its core areas.

In the past few months, the continuous battle in the field of online office has evolved into a short-term battle.

Zoom rose rapidly after the massive spread of pneumonia in the United States in March, and then hit a wall because of privacy security issues. Google has accelerated its product architecture reform plan, putting video call and office collaboration, which originally belong to two different business groups, under one system and starting to play the power of integration. Facebook has also launched group video, trying to join the fray from its best social sector.

Among them, Microsoft, which has the earliest layout and the most complete business in the field of digital office, quickly launched a business "flash war".

In March this year, due to a series of privacy problems caused by product design defects, zoom, which has just swept across the United States, was put on the wave. The malicious attacker can obtain the user's room ID through some simple methods, join and record the video call content. At school, some students even use zoom to spread pornography and extreme right-wing content.

In April, the education administration of New York issued a decree requiring teachers in the district to stop using zoom for online teaching. In the following month, zoom stopped its "expansion" and announced that it would focus on improving its functions to solve the previous security and privacy problems. On May 7, after functional improvements, the New York Education Bureau announced the "lifting of the ban on zoom".

Microsoft has also accelerated product iteration in response to the need for the "web lesson" scenario. An important reason why teachers used Zoom before was that Zoom video-talk feature showed more people at the same time, as well as a "raise your hand" feature. After learning about the requirements, Teams developed the two features quickly and, in the first place, gave exclusive priority to the New York faculty. 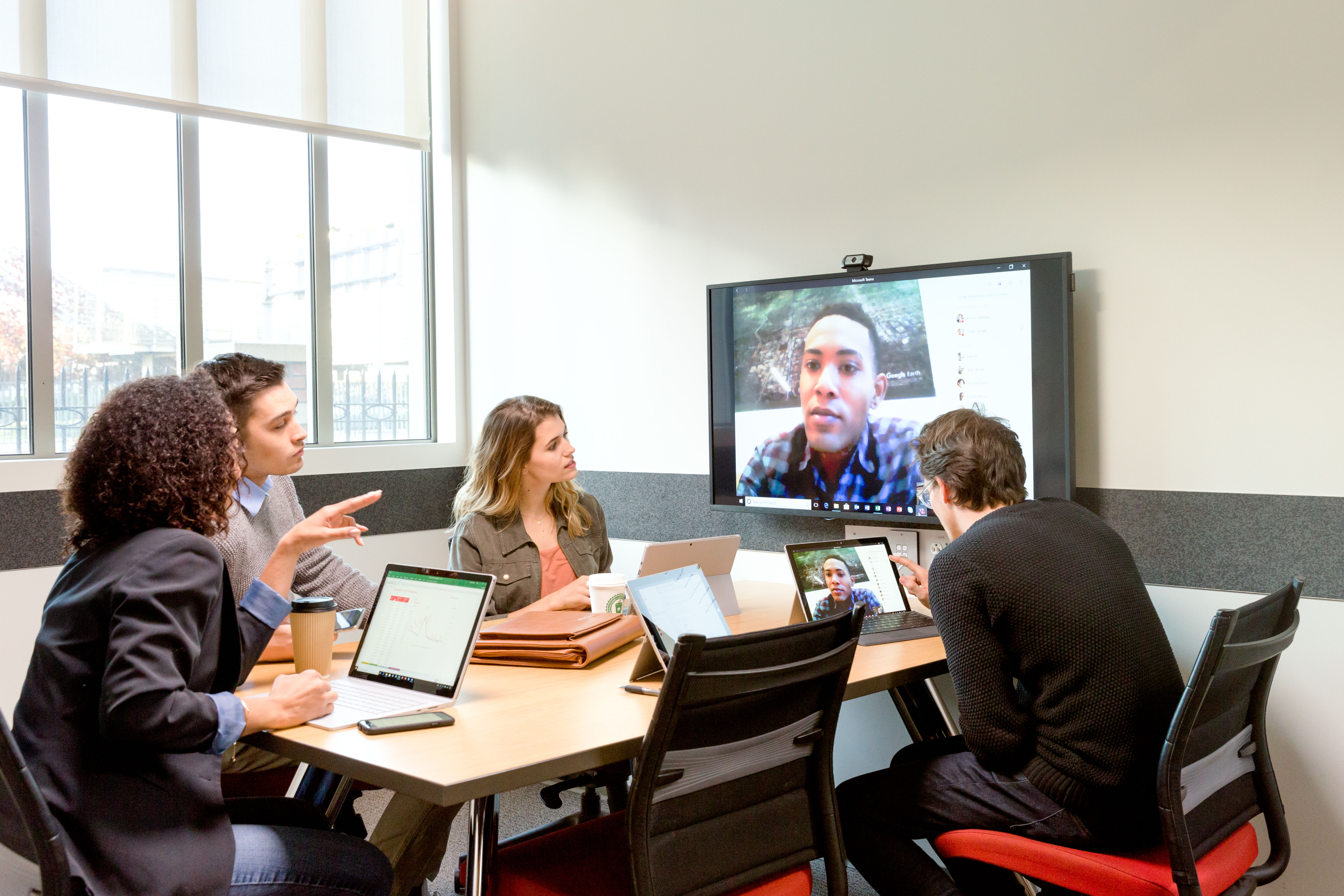 During the outbreak, Microsoft accelerated the iteration of team products ︱ Microsoft

In just one month, Microsoft gained more than 110000 users in the New York school district. And the online course is just one of the front lines of Microsoft team's all-round attack. Jeff Teper, who is in charge of the product, said that they accelerated the development of the product and added functions such as real-time noise reduction and custom background around the most important demand point during the epidemic.

In April, team's daily users increased to 75 million, double the number in March. The total number of calls on teams per day is more than 4.1 billion minutes.

Faced with such a transcript, Microsoft CEO Satya

In the months when the epidemic spread, many giants joined in the battle of online office, and "video conference" became the most important hot spot. According to app Annie, since October last year, the total download volume of video calling applications has increased from 5 million times a week to 50 million times, a tenfold increase.

Faced with rapidly expanding demand, the number of active users on Zoom day jumped 30 times from 10 million at the end of last year to 300 million. Free Google Meet for all users during the epidemic have also increased 30 times over the past six months, with more than 100 million people living per day.

For Microsoft, product and user active data is important, but more importantly, how to transform products and users into valuable "business".

Microsoft's biggest product advantage is not one software or feature, but the entire Office 365 office suite. The service includes a long history of office software such as Word、Excel、PowerPoint and a new generation of online services, including Teams、OneDrive. When Jeff Teper was appointed as Teams product leader at the beginning of the year, Nadera made it clear that he wanted him to strengthen the integration of Teams and more Microsoft office products.

So Microsoft aims at enterprises, schools and other pan-b markets with stronger payment capabilities.

Microsoft sent a team to serve New York school in all directions because the New York School District was already Office 365 customer. Microsoft also partnered with the NFL Rugby Professional League in March to help NFL use Teams remote for the 2020 rookie draft.

Microsoft understands that only by quickly integrating as many functions as possible into office can it better retain those enterprise customers. When such a set of software takes root in the office, it will be difficult for enterprises to migrate from Microsoft to other platforms. "Our users want to be able to chat, talk, and collaborate remotely in one place without having to integrate slack, zoom, Dropbox, and Google," Jared Spataro, Microsoft's vice president in charge of office 365, told the Wall Street Journal. This one product experience, which includes all functions, is the greatest value of office. "

Such strategies do work. A number of large enterprises and schools, including GE and L'Oreal, have become Teams customers. 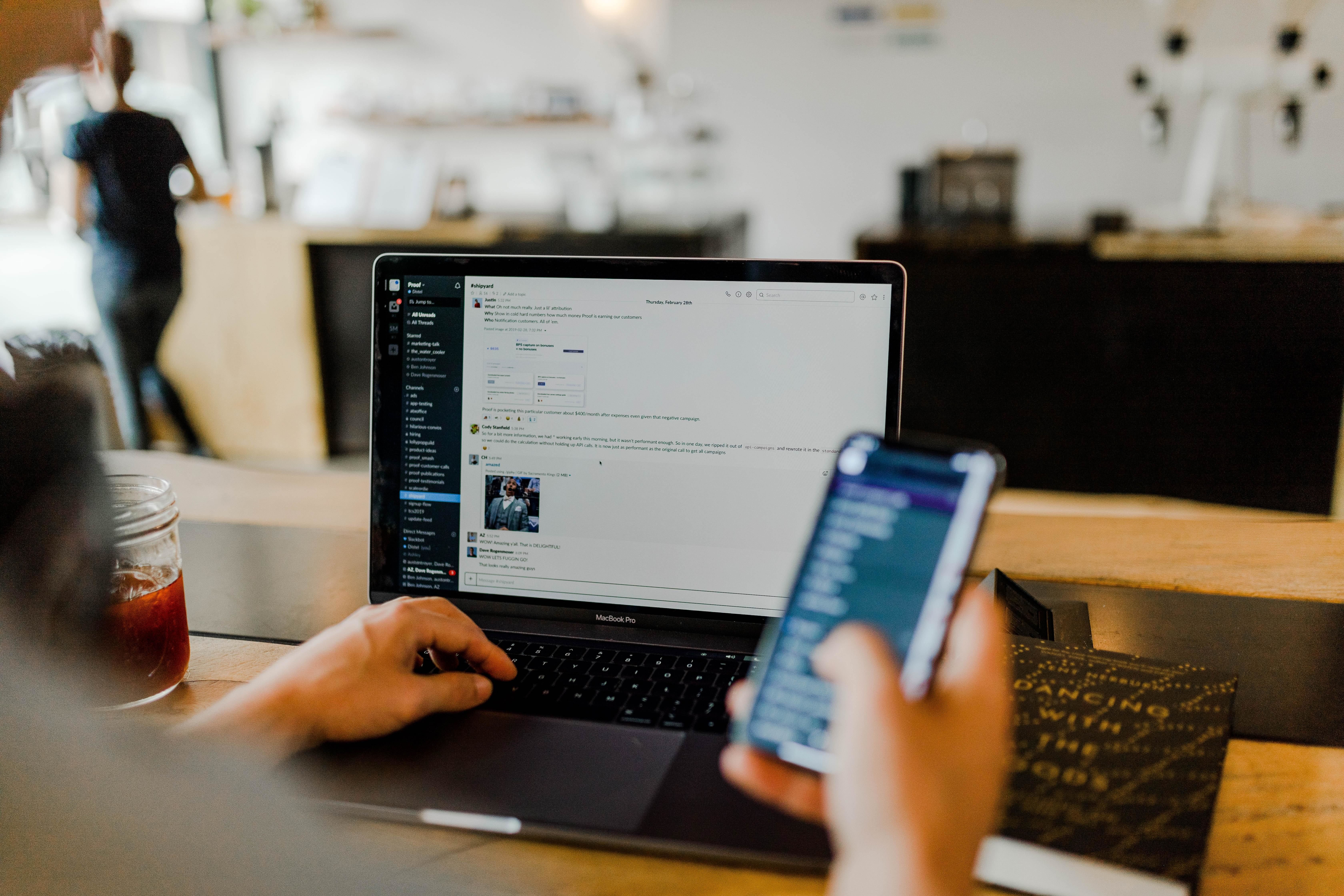 With the development of Internet technology, the demand for online office software is growing ︱ unsplash

The first Teams to target in 2016 was Slack, which was once the most famous startup in online collaboration. The core function is chat communication, but it can integrate many third-party cloud services, including Dropbox、Google Drive web disk, Trello such project schedule management software, and code hosting platform Github.

During 2015, microsoft offered Slack a bid but was rejected. One year later, Microsoft released a Teams, that drew on a number of Slack design ideas and had many of the same features, such as the Slack's core "integration of third-party services feature. This allows many older Microsoft customers to switch from Slack to Teams. relatively easily

At the same time, Microsoft has deployed its own strong sales team to launch a fierce sales offensive to Teams potential customers. Microsoft's sales representatives even offered to pay users millions of dollars in platform migration costs when lobbying customers, the Wall Street Journal reported.

In 2018, Microsoft acquired GitHub and continued to contribute to its enterprise business matrix. In July 2019, shortly after slack went public, teams announced that the daily living users of their platform had exceeded 13 million, higher than the 10 million of slack at that time.

Chess meet the opposite, each other copy

The course of development from Slack to Zoom,Teams is like a "cut-off ".

When Microsoft aims at an opponent, it will rely on rapid product iteration, a huge service platform, a strong sales system, directly into the business hinterland of the opponent, and succeed in the fierce competition. This strategy has been criticized by some people. Some people accuse Microsoft of imitating the competitive product function, smothering its rivals through the platform's volume advantage, and even think that this approach has the suspicion of monopoly.

But this is also Microsoft's most powerful internal skill.

Since the 1990s, Microsoft has been "evergreen" in the field of science and technology, and has long been at the forefront of the list of enterprise market value. It is the third company with a market value of more than one trillion in history. In the past year, it has been holding the title of "the first company with global market value" with apple. In October last year, Microsoft beat Amazon, IBM and other competitors to successfully bid for the cloud computing transformation project of the U.S. Department of defense, with an order amount of up to $10 billion.

It created the most successful software ever sold, windows. In the Internet era, it began to cultivate the enterprise and cloud service market in depth, and sought development based on the strong cash flow and business moat. A product or business of Microsoft may fail, but the big tree of Microsoft still stands. 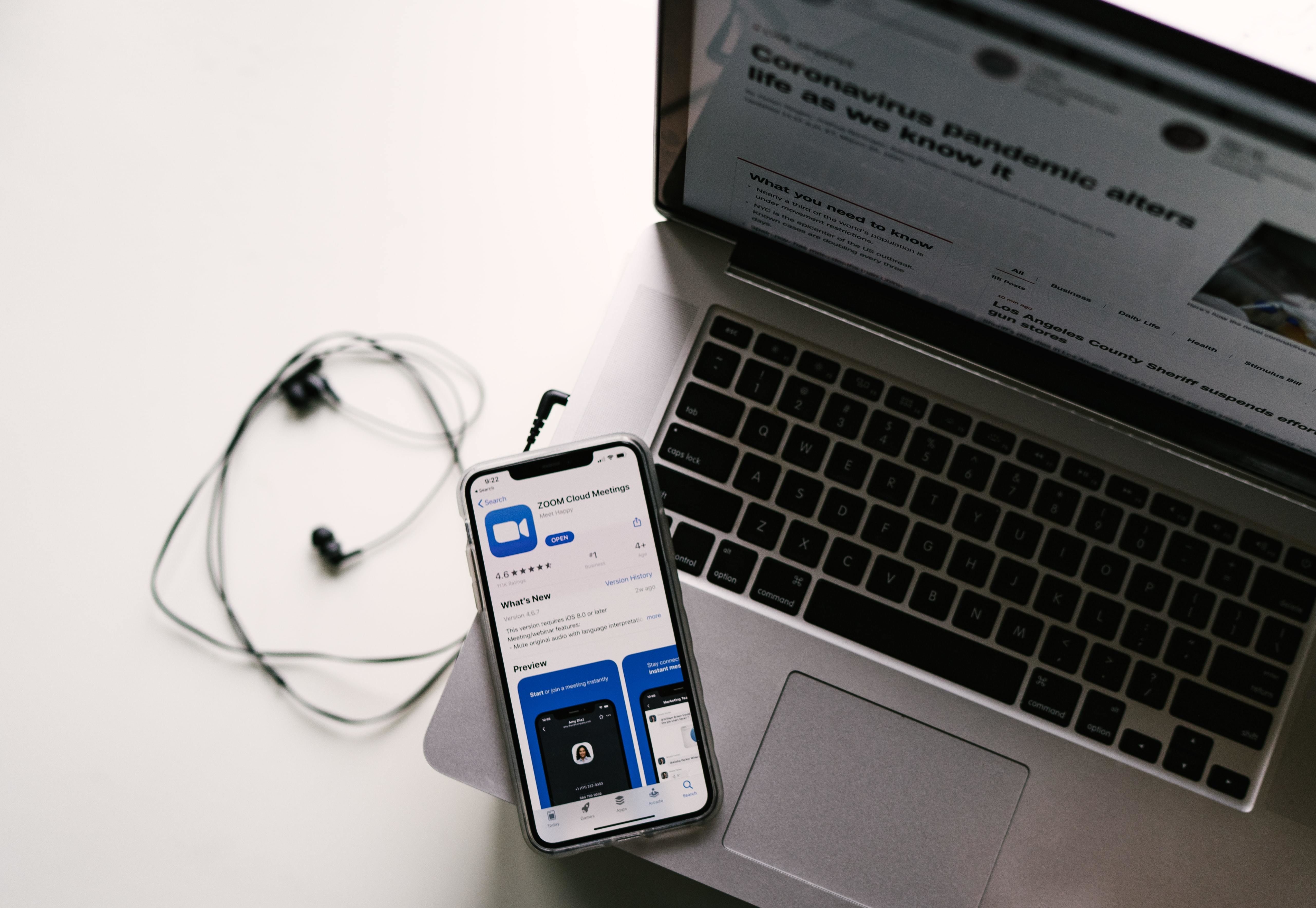 For teams, zoom is a tougher opponent than slack. Because zoom is growing faster and cash flow is healthier. According to the first quarter of 2020 results just released by zoom, the quarterly revenue is 169% higher than the same period last year. More importantly, despite the increase in operating costs during the outbreak, zoom maintained a high gross margin of 68.4%. And zoom is winning the favor of more enterprise users. There are 265400 teams and enterprises that have purchased the paid service of "more than 10 employees" in zoom, an increase of 354% compared with the same period last year.

The competition between Teams and Zoom is far from over. Only this time, when Teams try to penetrate the heart of the Zoom, the opponent is also entering its core area.

This article was first published in Geek park. Please contact geekparker or zhuanzai@geekpark.net

Related news
Microsoft says its Teams group chat service has more live users than Slack
Catch up with slack, snipe zoom, Microsoft teams is such a successful counter attack
To catch up with Slack、 sniper Zoom, Microsoft Teams is such a successful counterattack
NADELLA: build Microsoft teams into wechat in the enterprise field
Hot news this week
The company announced the shipment data of 2021 Q1: the proportion of Huawei fell to the sixth place in the world at 4%
Sony's third generation noise reduction experience: comparable to the strongest combat power of real wireless noise reduction headphones
Henan satellite TV "Dragon Boat Festival wonderful tour" full version popular all over the network: netizens call content amazing
New people to do "new" business: preparing for the battle with Zhang Ying, a peach farmer in Yangshan
In depth cooperation with Huawei real hammer! BYD open recruitment of "Hongmeng development engineer"
In 618, big promotion came, beware of the trap of cheating by taking advantage of the official SMS of charging companies' platforms
Can you travel around the world without leaving home? Jingdong 618 Jingdong International gives you a fancy "flying" strategy
Dragon Boat Festival colorful Luoshen amazing interpretation of underwater flying netizen: too beautiful, lost the language
During the period of 618, Jingdong will issue a total of 10 billion consumption vouchers, which have benefited consumers in 14 places such as Beijing and Zhejiang
Is salty or sweet rice dumplings popular? E-commerce platform: the sales volume of salty rice dumplings is twice that of sweet rice dumplings
The most popular news this week
480000! Baidu announced the cost of the fifth generation shared unmanned vehicle for the first time
Windows 11 desktop window, taskbar first look: a variety of layout options
Return after 10 years! Windows 11 latest boot audio exposure: listen to it
Yixin technology won the honor of "2020-2021 (4th) China IC unicorn"
Which brand of vacuum cleaner is better? Who should buy vacuum cleaners and floor sweeping robots at the same price?
Shenzhou Wentian wechat adds time limited status "rush"
A moment in history! The successful launch of Shenzhou 12
Airpods 3 will be launched this year! Apple executives hint: it may integrate the bracelet function
The first man after Bill Gates! Microsoft CEO NADELLA will also be chairman of the company: the first time in 20 years
Domestic mining fails Huaqing: the price of graphics card is falling