According to foreign media reports, a new study on children's application use and habits shows that,YouTube's dominance is facing a major threat as children are now diversifying their time away from the platform for other applications, such as tiktok, Netflix, roblox and other mobile games.

According to the survey, children aged 4 to 15 spend an average of 85 minutes a day watching YouTube videos, compared with 80 minutes a day on tiktok. The report found that the latter also promoted the use of children's social applications, up 100% in 2019 and 200% in 2020.

It's no surprise that YouTube is still one of the most used apps for children, the study found.

But now children watch twice as many videos a day as they did four years ago. Although the minimum age applicable to YouTube's flagship app is 13 years old, in fact, this age threshold has never been implemented, which caused the company to be imposed a historic $170 million fine by the FTC for violating the US children's privacy regulations in 2019.

Today, 69% of American children, 74% of British children and 88% of Spanish children use the app. At the same time, the company has launched the application of YouTube kids for younger children, but its use rate in the United States is only 7%, higher in the United Kingdom, 10%, but it has not attracted any attention in Spain. 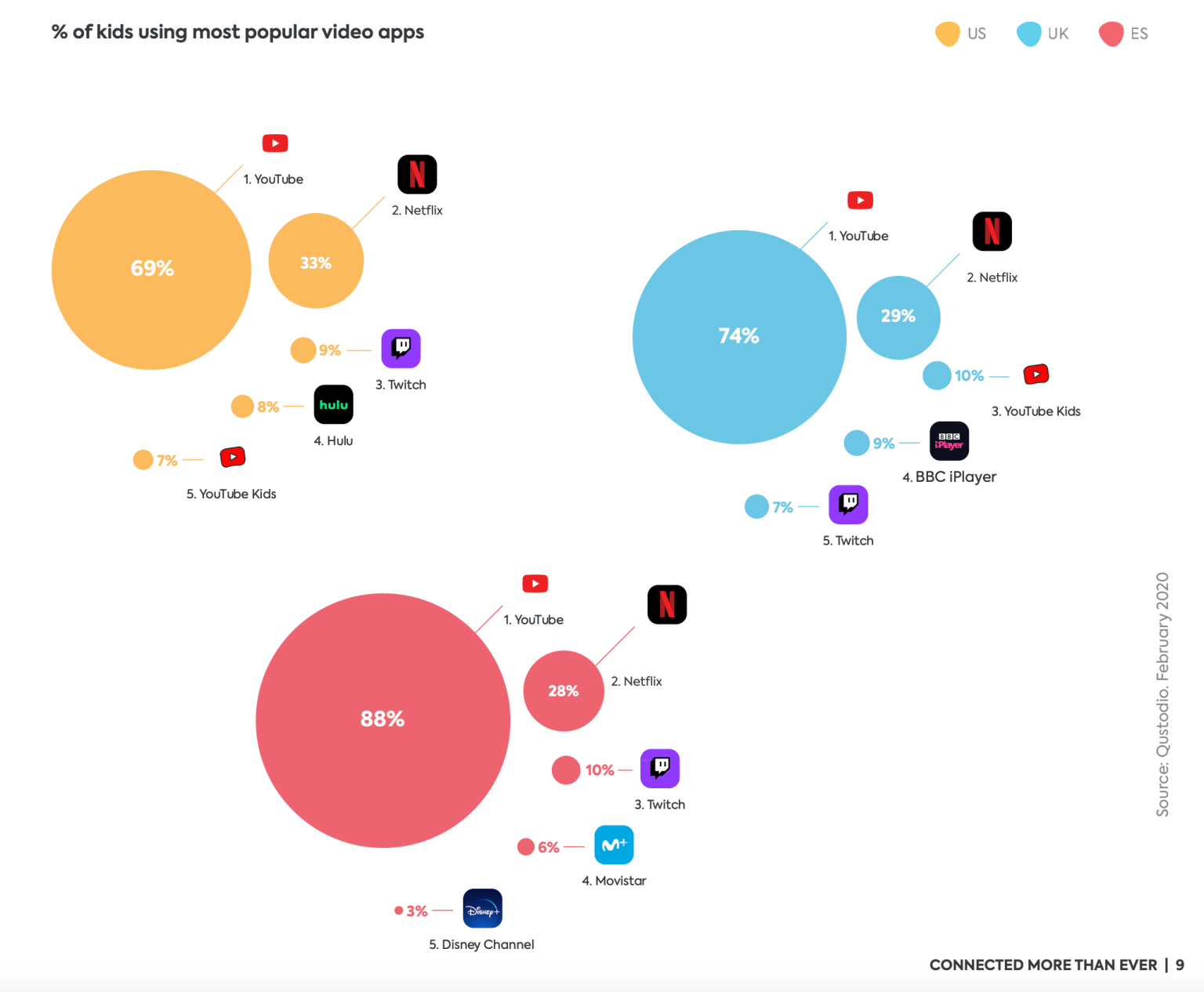 Netflix is the second most popular online video app, with 33% of children in the United States watching content, 29% in the UK and 28% in Spain, according to statistics.

But imagine that during novel coronavirus pneumonia, they will undoubtedly spend more time online video. In the United States, for example, in mid April, children spent 99 minutes a day on YouTube.

To some extent, the decline in YouTube's total length of time may be due to children spending more and more time on tiktok. If more and more YouTube founders choose to leave because of more and more regulations and related loss of profits, tiktok may gain more attraction among users. With the expansion of tiktok's content portfolio, more creators will further expand their appeal to users.

Last year, tiktok became one of the top five non Facebook owned apps to download globally, and it continues to grow among users of all ages. 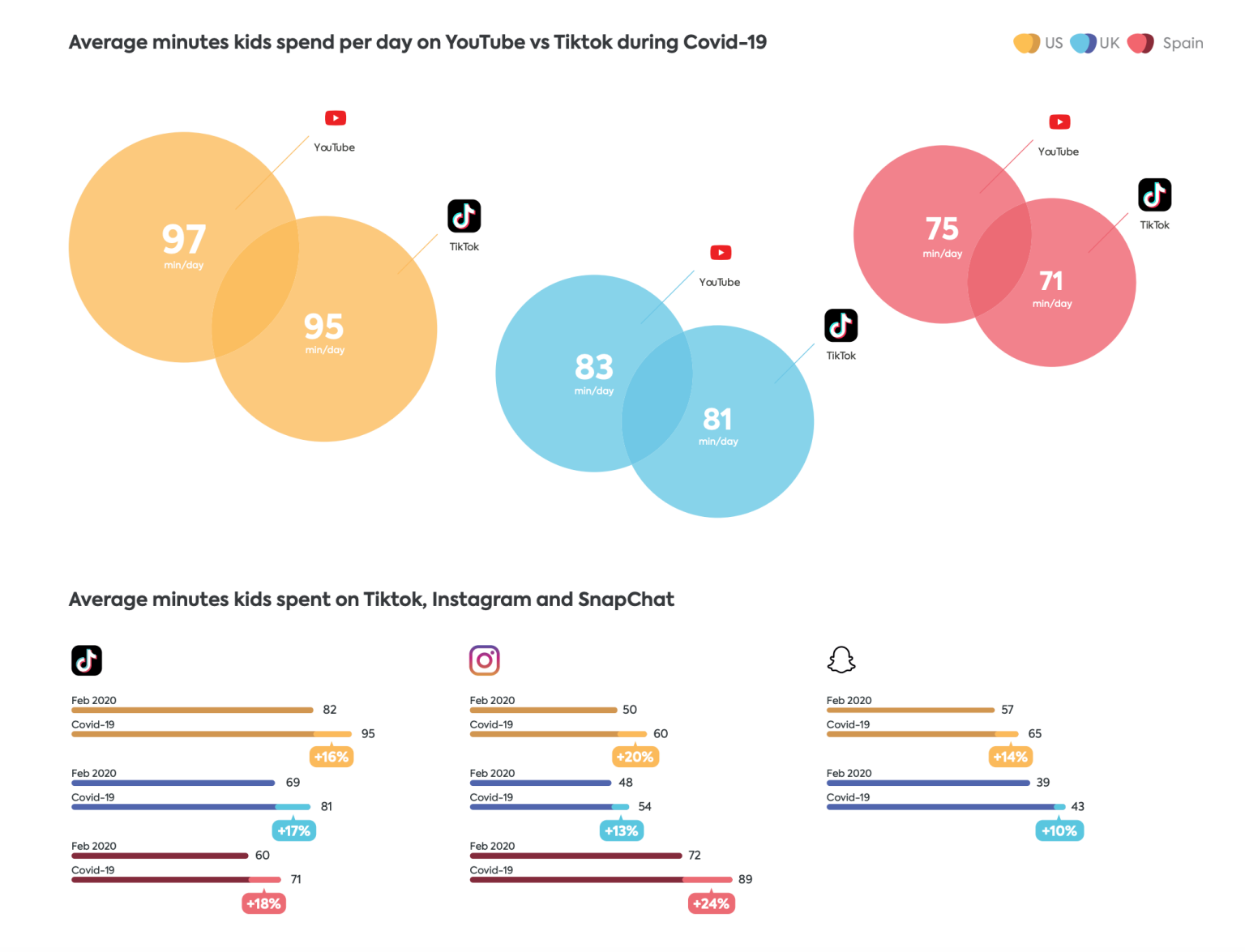 In the field of online games, roblox dominates in the United States and the United Kingdom, accounting for 54% and 51% respectively. In Spain, however, that's only 17%, where children now prefer brawl stars. 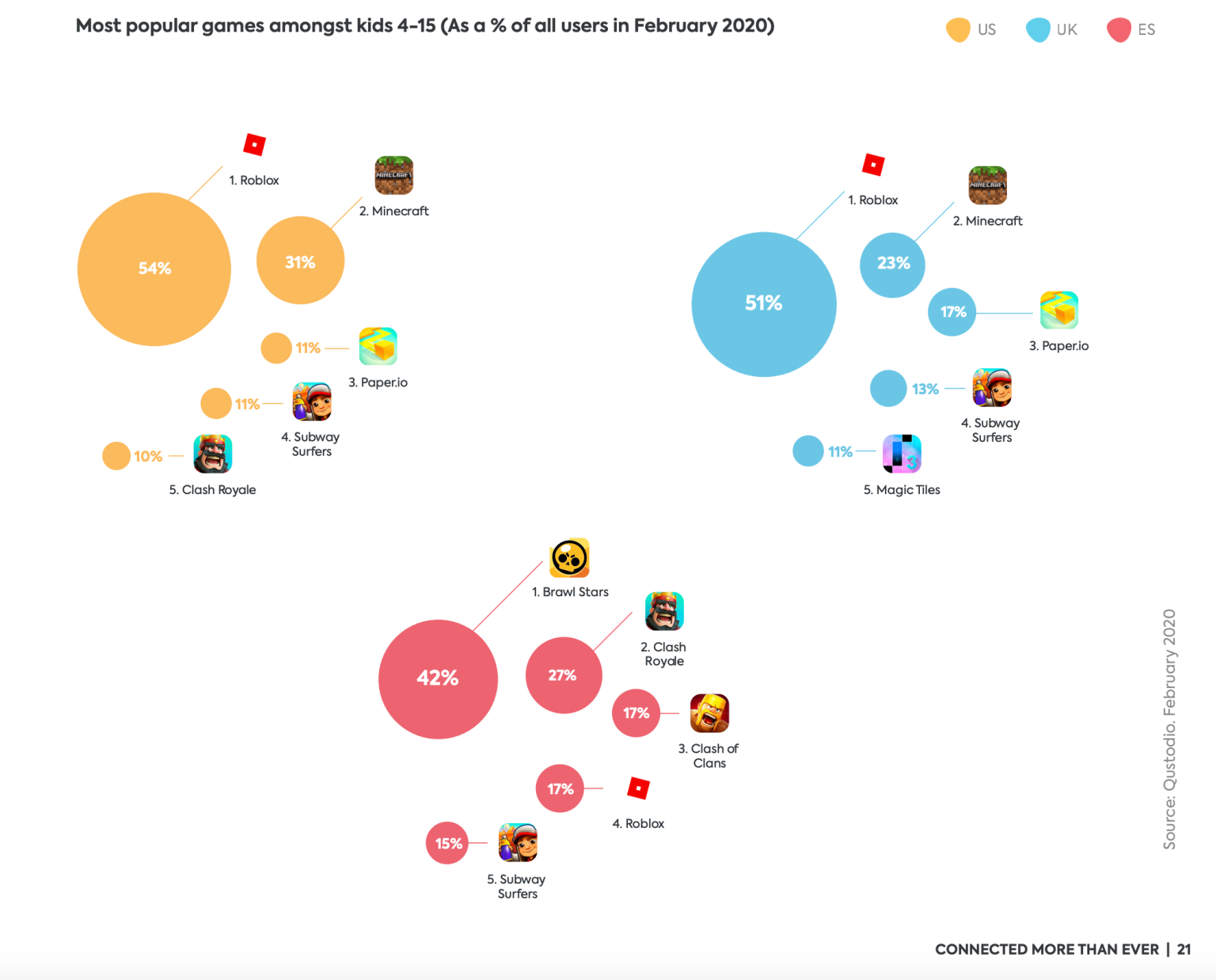 Roblox is not only a small entertainment, it also takes up the time for children to watch the screen.

In February 2020, children in the United States, Britain and Spain spent an average of 81 minutes, 76 minutes and 64 minutes a day on the game. On average, children play roblox for 20 minutes longer than any other video game.

During the novel coronavirus pneumonia blockade period, the time of playing children's games in these three countries increased by 31%, 17% and 45, respectively. The Roblox played a significant role in the growth of children's lives. But it turns out that blocking doesn't increase the proportion of children who use game apps. 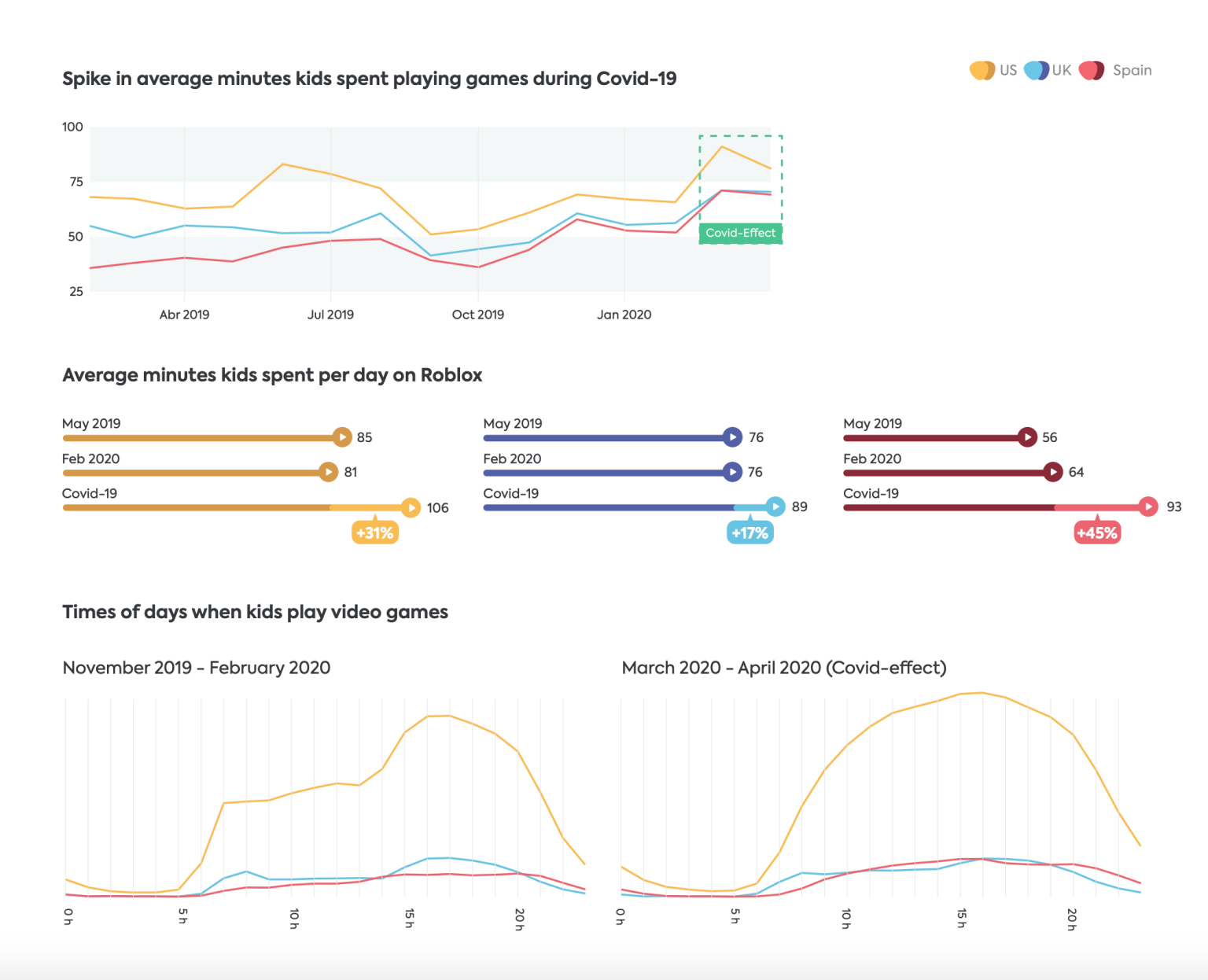 Novel coronavirus pneumonia was not much increased from 2019 to early 2020, and this continued until the beginning of the new crown pneumonia blockade. But even so, Google classroom still occupies two of the three markets studied. According to statistics, 65% of children in Spain use the app, while 50% in the United States, but only 31% in the United Kingdom.

Related news
Survey: American, British and Spanish children spend almost the same time in tiktok as YouTube
Who are the YouTube and TikTok," subversive "of the music industry?
Survey: about a quarter of American adults get news through YouTube
Can YouTube carry the banner when Google integrates all music services?
Hot news this week
"Sheep a sheep" fire, is expected to attract hundreds of millions of financing? But it doesn't have a license...
The first "zero carbon factory" in the ICT industry, Lenovo (Tianjin) Smart Innovation Service Industrial Park is officially put into production
Baidu Ping Xiaoli: The repurchase rate of users on Baidu App reached 60%, and the daily inquiries exceeded 4 million
Billions of euros in investment, Intel Italy chip factory will be located in the Veneto region, sources said
"Sheep a sheep" the whole network burst fire! The founder was the Alma mater system of exhibition card publicity
Huawei Mate50 is on sale: Kunlun glass version is difficult to find, the maximum price increase of the Porsche series
Tencent Music back to Hong Kong behind: online music "internal volume" intensification, short video will become a new growth rate
Intel failed to deliver on its promise: Summer is over and there's still no high-end, flashy desktop graphics cards
Xiaomi Civi 2 Stable Snapdragon 7:23 87mm2 Large-area VC liquid cooling, heat dissipation increased by 200%
"Look at the weather why do I need to renew membership"? Inkblot Weather membership service is a hot topic
The most popular news this week
Huawei Smart Screen portable version released: 10.4-inch 2K screen, 10995mAh battery
The world's first 6GHz frequency Intel high-profile announcement: the lead is indisputable
Do you have the opportunity to take noise -canceling ear to damage the hearing? Experts from the Three Hospital said that
Jump ticket 2 years "pigeon king"! Avx-512 is publicly supported for the first time in the Intel 60 core
I can't afford to live without Musk's help
Mobile phone fast charge new volume king Xiaomi three new machine into the network: the highest 210W?
Secretary -General of the Federation of Federation: Foreign artificial artificial Chinese online red cars have great advantages in China
Do you want to travel to space? Aerospace expert: China already has technical conditions
The strong response to the iPhone 14 Pro Max could widen the gap between the iP15 Pro series
Intel's Arc A7 flagship graphics card debuts in private: Just these two