On May 27, Microsoft officially released the function update of windows 10 may 2020 (20h1 / version 2004).While many devices upgrade to experience new functions, there are also many devices that are blocked by Microsoft due to compatibility problems.

There are many problems with the function update of windows 10 may 2020, including compatibility problems, Bluetooth connection problems, blue screen problems caused by the old driver, etc. Currently known problems include:

● enable "always on" and "always connected" function, which will cause the system to restart randomly

● NVIDIA GPU driver version 358.00 or earlier will cause the device blue screen

Microsoft said that the windows 10 may 2020 feature update will cause the external display to appear black screen, and the main control of the graphics card will be marked as a "problem" reminder in the device manager. Microsoft plans to address this issue in a future version of the operating system. 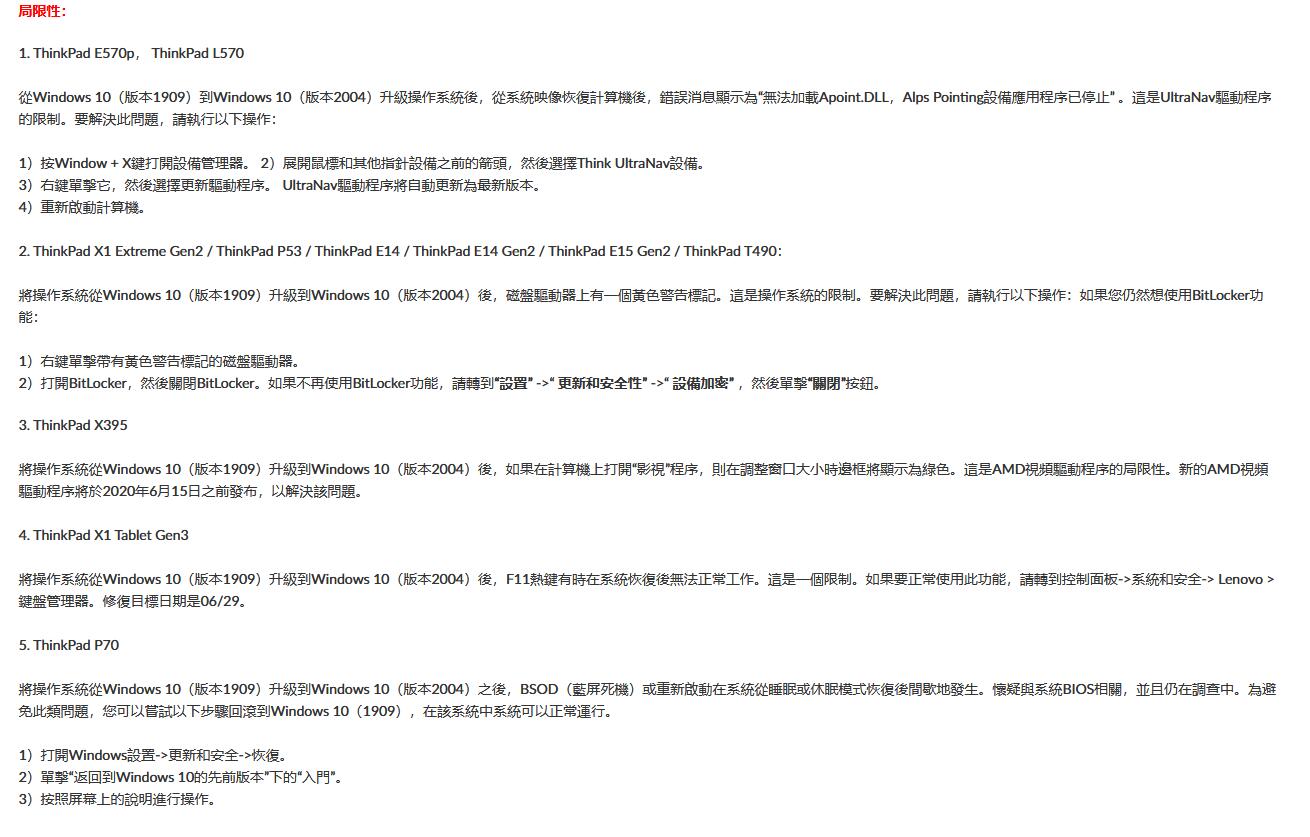 Lenovo also acknowledged that there were a number of issues with the windows 10 may 2020 feature update. Some problems have simple solutions, while others need system rollback or waiting for Microsoft to fix.

Lenovo also acknowledged a known problem that can cause devices to "fail to load" when using the system recovery function Apoint.DLL , Alps pointing device application has stopped Apoint.DLL Failed).

If you want to fix this problem, you need to perform the following steps:

2. Expand mouse and other pointing devices.

4. Right click it and update the driver to the latest version.

After upgrading windows 10 version 2004, if the disk with BitLocker has a yellow warning mark, you can try the following steps

2. Turn BitLocker on and off.

3. if you don't use the BitLocker,, you can start setting

Lenovo said that on ThinkPad X1 tablet gen3, F11 hot key may not be available after installing may 2020 update. Lenovo plans to fix the problem in an update later this month.

Lenovo acknowledges that there are known problems with may 2020 that can cause a blue screen crash when recovering from sleep or hibernation.

If your Lenovo device has a blue screen problem after upgrading to may 2020, Lenovo recommends that you roll back to version 1909 or earlier.

Related news
Microsoft Windows 10 May 2019 update officially started to push globally within a few weeks
RTM Windows 10May 2020 Experience Report: Finding Three Important Things
Windows 10May 2020 information summary: release time, new features, etc .(figure)
Windows 10 may 2020 is expected to meet you next week (Figure)
Get ready: Microsoft starts to push windows 10 may 2020 updates "step by step" this week
Windows 10 may 2020 ready to launch: inventory of major new features (Figure)
Windows 10 may 2020 causes some old NVIDIA drivers to be installed on the blue screen
Lenovo released a notice acknowledging that windows 10 may 2020 causes many problems (Figure)
Windows 10 may 2020 new bug: unable to create new storage spaces (Figure)
Windows 10 may 2020 cumulative update issues bug: unable to load WSL 2 (Figure)
Hot news this week
Tesla's response to the spontaneous combustion and explosion of Shanghai model 3: preliminary judgment that the accident was caused by the collision under the car
Pinplay: has filed a lawsuit against Tesla for infringing pinplay's reputation right through the Internet
China's auto chips stopped in Europe and America? Official response
Global chip crisis worsens Ford closes German factory for one month
Huawei upgrades 2021 notebook models of matebook series: 11 generation core from 5499 yuan
Full screen bomb is playing crazy wechat Android version 8.0 beta version comes with download
Girls will be tied to the doll on the back to take home during the holiday netizen: This is too caring
Intel and AMD motherboards are in chaos
NVIDIA's acquisition of arm may be rejected by one or more regulators
MIT biologists reveal why cancer cells waste so much energy
The most popular news this week
Intel will outsource orders to TSMC and Samsung: its GPU will use 4nm process, the source said
Samsung Galaxy note 20 Fe exposure: or the best of Note Series
Optional update for windows 10 version 1909: fix directory name invalid error
What does the new coronavirus look like? First 3D image exposure: like a ruined planet
LG mobile phone business turbulence: scroll screen may not be listed
Windows 10 21h1 confirms that the update range is not big: it mainly fixes bugs and optimizes performance
Wechat "explosive" update? Wechat 8.0 full experience of new functions
Reported that the iPhone 12 Mini sales in the United States and Europe are not as strong as expected
European Parliament invites CEOs of four US technology giants to attend antitrust hearing
Why Tencent is the Chinese version of Microsoft in the era of car building and navigation