Next year, NASA helicopters will fly over Mars 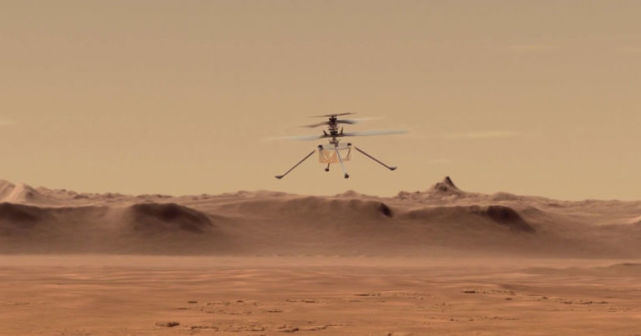 Tencent technology news, June 24, according to foreign media reports, NASA's spacecraft is about to launch on another planet. As part of this summer's Mars exploration mission, NASA will try to do something it has never done before: fly a helicopter through Mars' thin atmosphere. If successful, the small helicopter, ingenuity, will create a new way for future robotic probes to see Mars and other planets in the solar system.

There are many challenges to flying on Mars because there is not much air there to produce enough lift. On the surface of Mars, the density of the atmosphere is only 1 / 100 of that of earth, but a smaller gravity (about 1 / 3 of that of earth) helps lift off. However, taking off from the surface of Mars is equivalent to flying at an altitude of 30480 meters on earth. Never on earth has a helicopter been so high, and this altitude is more than twice that of a jetliner.

The original will travel to Mars at the same time as perseverance, NASA's fifth robotic rover on the red planet. The mission, scheduled for launch on July 20, is one of three missions to Mars this year.

Before 1997, all spacecraft sent to the surface of Mars were static landers. Until the Pathfinder mission included something revolutionary for NASA: a wheeled robot, the sojourner rover, about the size of a filing cabinet. Following that success, two golf cart sized rovers, spirit and opportunity, arrived on Mars in 2004 and curiosity in 2012.

For robotic probes on another planet, the ability to move around provides them with a huge advantage. Planetary scientists no longer cling to one place. The rover can cross the landscape and stop to see interesting rocks at close range. This freedom is key to the current understanding of early Mars, a cold, dry planet that used to be humid, at least in environments that might be suitable for life.

The original is essentially an aerial version of the rover, which demonstrates a new technology that may be more widely used in future missions. The original's main body is about the size of a softball, with four long, slender legs sticking out. The two groups of blades (about 10 cm long) rotate in opposite directions. It weighs only 1.8kg and is about 46cm tall.

Charles Barram, then director of the Jet Propulsion Laboratory

By the end of 2014, engineers had built small prototypes. The micro helicopter was placed in a room where most of the air was sucked out to replicate the density of the Martian atmosphere. Because no helicopter flight control software has yet been written, one member of the team tried to use the joystick to guide its movement, just like an amateur piloting a drone. However, as the blades rotated, the helicopter rose, but then immediately lost control.

One problem is that the blades bounce up and down at speeds of 2000 to 3000 revolutions per minute, Barram and Grip said. On Earth, the pressure of air on the blade minimizes the bounce. But in Mars' thin atmosphere, bouncing creates instability, making helicopter movements difficult to control. the solution originally was to make the blade slightly harder, but this would add weight.

The project involves a series of compromises to accommodate the limitations of helicopter size, weight and battery power. At the same time, Gripp has led the way in developing computer algorithms that will be able to manipulate and adjust helicopter flights fast enough to automatically respond to changing atmospheric conditions on Mars.

In May 2016, the next helicopter prototype was ready. In the same room that simulates the transparent Martian atmosphere, the helicopter rises, then hovers steadily and makes a soft landing. For the first time in history, a prototype helicopter flew under simulated Martian atmospheric conditions, although it was still connected to an external power source and computer.

The complete design, including the battery, Qualcomm snapdragon processor, is fully integrated with mobile phones, communication systems and sensors and is ready in January 2018. To mimic Mars' weaker gravity, a pulley pulls up to counteract some of the earth's gravity. The air density in the room has dropped again. But this time, instead of leaving a small amount of earth's air, a small amount of carbon dioxide was injected, which is the main component of the Martian atmosphere.

Half a year later, NASA approved the addition of helicopters to NASA next Mars mission. Now, Perseverance's belly is attached to the original, which is making final preparations for the launch from Cape Canaveral, Florida.

When Perseverance lands on Mars in February, about two months later, researchers will begin testing the original. Perseverance will find a suitable flat place, release the helicopter to the ground and drive to at least 100 meters away. Mimi

In the next 30 days, the helicopter will fly up to five times, but it will sit there most of the time waiting for the solar panels to charge the batteries.

The first flight was to rise tens of centimeters, circle for 30 seconds, and then land. The following flights will be longer, higher and farther. In the fifth flight, if all is well, the original will take off about 4.6 meters, fly 150 meters, and then return to where it started. It has two cameras: a downward black-and-white camera to track its location; and a color camera to observe the scenery. The flight will last one and a half minutes.

Once the flight is complete, the original will remain at the final landing point, and the perseverance will drive to complete the remaining tasks. Mimi

Even if future helicopters travel to Mars, they will almost certainly never be a viable vehicle for astronauts there. Mimi

Related news
What is the Mars 2020 Mars Rover? Go to the NASA assembly room and have a look.
NASA installs new landing sensor components for Mars 2020 rover to improve safety
NASA Engineers Install Sample Cache System on Mars 2020
NASA says Australia will help support its Artemis and Moon to Mars programs.
NASA completes separation of Mars 2020 landing platform
NASA Mars 2020 probe completes the first "stand up"
NASA reduces the final candidate names for Mars 2020 to nine
NASA is finally going to unveil the official name of Mars 2020
Hot news this week
Templates for creating new Twitter in the future? Musk's praise of WeChat has triggered a heated discussion on the whole network
Tencent Music's TME live will re-screen Jay Chou's concert on may 20 and 21
Sony's new LinkBuds S headset parameter exposure: only 4.8 grams of comprehensive battery life 20 hours
Weak demand in the mobile market! Domestic shipments of mobile phones fell 40.5% in March to a two-year low
Henan 4 village bank line cannot withdraw cash? CBRC responds! The public security organs have registered an investigation
Baidu: In 2021, an average of 56 billion malicious information of all kinds will be intercepted every year
"Chinese version of LV" is re -executed 680 million! Reporting the property clues of the chairman, up to 8.66 million yuan
Pig companies continue to increase technology, just launched the smart pig farm, another 100 million to set up a technology company
The Jingdong Express bulk order sent to Shanghai across the country is completely static? JD.com: Not true No such information has been published
"Tencent's more than 30-year-old employees account for nearly 60% of them" on the hot search Netizens: Don't mention 35 years old, start to mention 30 years old
The most popular news this week
The domestic screens are rolled to the 2K screen. Why don't Apple follow the roll?
Meizu 19 series coming? Meizu mobile phone appearance patent disclosure: the return of secondary screen
Jingdong crowdfunding 10000mAh mobile power supply: with Apple Lightning and Type-c dual wires
Mobile phone chip CPU energy efficiency ranking: it is comparable to A14
What can we learn about m& # 111nkeypox cases in many countries around the world?
Alibaba Daniel Zhang connects 300 platform merchants: do more practical things for merchants
At the age of 58, he was elected as the chairman of Everbright Bank! Former President of Bank of China and Construction Bank
Buy An Audi or a Tesla? Audi's new electric vehicles are on sale: from 300,000
The first domestic Tianji 1300 mobile phone did not fire first! More than 260,000 people made reservations
The Chinese team officially made up for the bronze medal in the Tokyo Olympic relay! Su Bingtian responded excitedly