"After stalling, there are more than 50 vehicles on the road, which are rushing through many traffic lights." Chen Yu (pseudonym) from Nanchang, Jiangxi Province, who is the Party of model 3 runaway event, used "thrill" and "like making a movie" to describe his feelings at that time in an interview with reporters of "daily economic news". 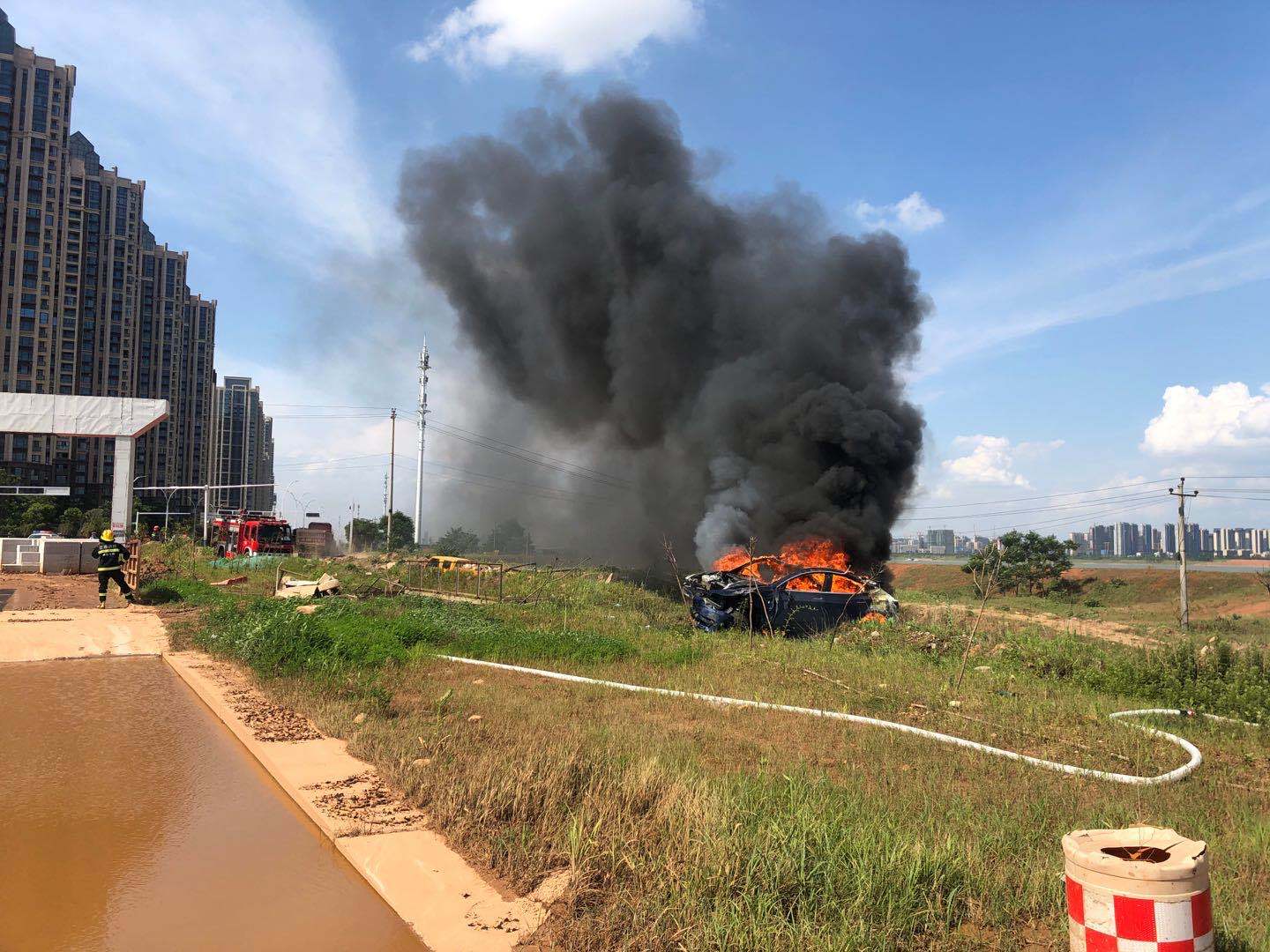 According to Chen Yu, on the afternoon of June 16, when he drove the Tesla imported model 3 through Ganjiang Avenue in Honggutan New District of Nanchang City, the speed of the vehicle suddenly increased from 50-60km to 127km, and it was invalid to step on the brake. About 8 kilometers after the car went out of control, Chen Yu chose to crash into the mound to help himself, and finally the car overturned and caught fire. At present, Chen Yu is still in hospital.

It is understood that Chen Yu set the maximum speed limit of vehicles at 127km / h due to the large number of high-speed sections in normal times. "I usually drive in the city, and the speed is generally controlled at 50-60km / h, but this time the vehicle suddenly increases the speed to 127km / h. fortunately, there were fewer pedestrians on the road at that time, or the consequences would be unimaginable." Chen Yu told reporters.

However, Tesla denied that the accident was caused by model 3 out of control and brake failure. On June 24, Tesla said in a "commissioned repair contract" sent to Chen Yu and his wife that after the background collection of vehicle driving data and field investigation, the system detected that there was a signal to step down the accelerator pedal or not in the minutes before the accident and when the collision occurred; no brake trace was found in the accident section during the field investigation. 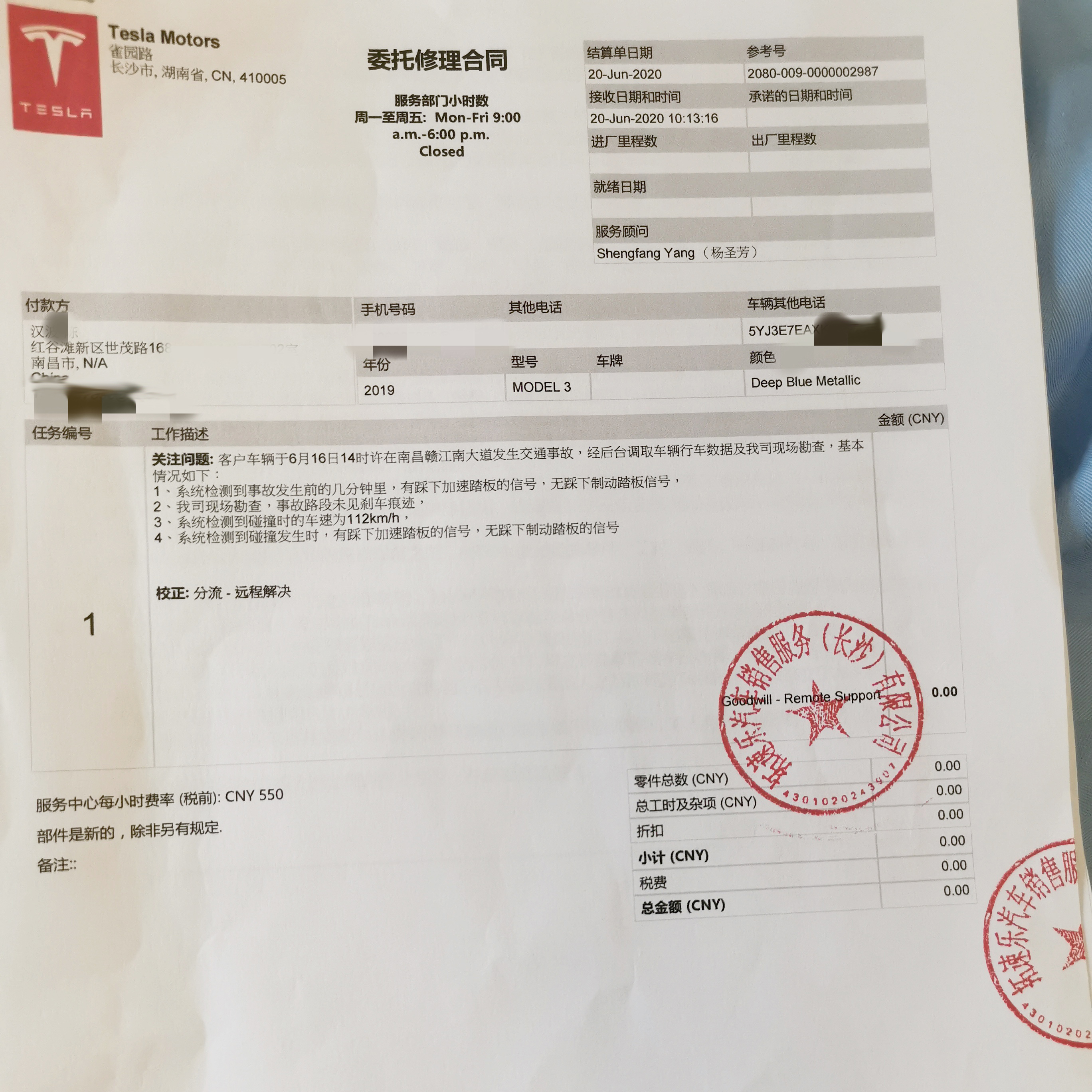 "We are actively cooperating with relevant investigation departments and submitting relevant information to the police for conclusion," said the head of Tesla According to media reports, the Traffic Management Science Research Institute of the Ministry of public security and the AQSIQ have sent people to Nanchang to participate in the accident investigation.

Driving out of control for 8km, the owner denies stepping on the wrong Brake

According to the photos at the scene of the accident, the fire of the model 3 is fierce after spontaneous combustion, accompanied by thick black smoke. "The accident vehicles have been consigned to the parking lot of Honggutan traffic police brigade." Chen Yu's wife told the daily economic news that the cars she saw in the parking lot were totally different. 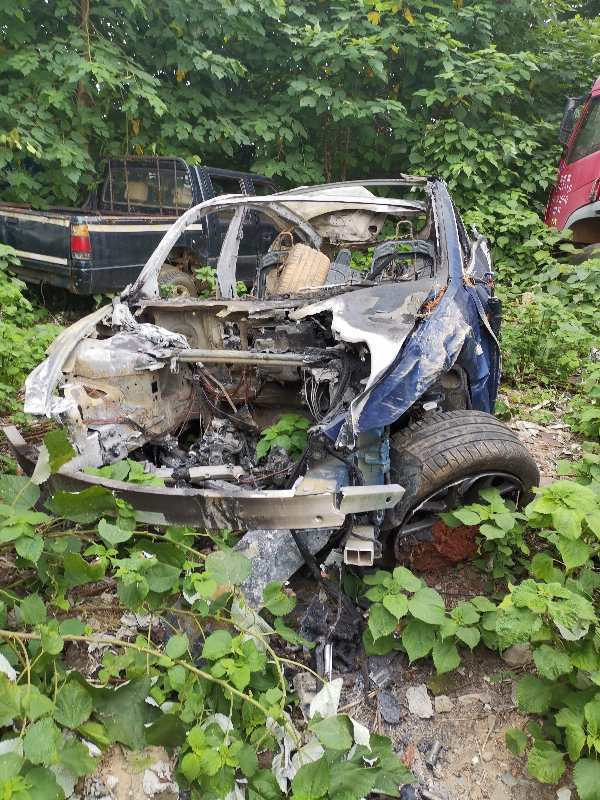 According to Chen Yu, after hitting the mound, the vehicle rolled over many times and began to smoke. "After rolling over, the vehicle's glass was broken, so I crawled out of the front windshield window and fled quickly. About ten minutes later, the car started to catch fire. " Chen Yu told reporters that he was very conscious at that time. He had severe abdominal pain after escaping. He first called 120, then 119, and finally the traffic police.

According to the local hospital diagnosis, Chen Yu was "abdominal trauma" with blood accumulation in the abdomen. "A section of intestines has been cut off. The doctor said that he can't eat for more than half a month." Chen Yu told reporters that as of June 21st, the cost of diagnosis and treatment has reached 50 thousand yuan. 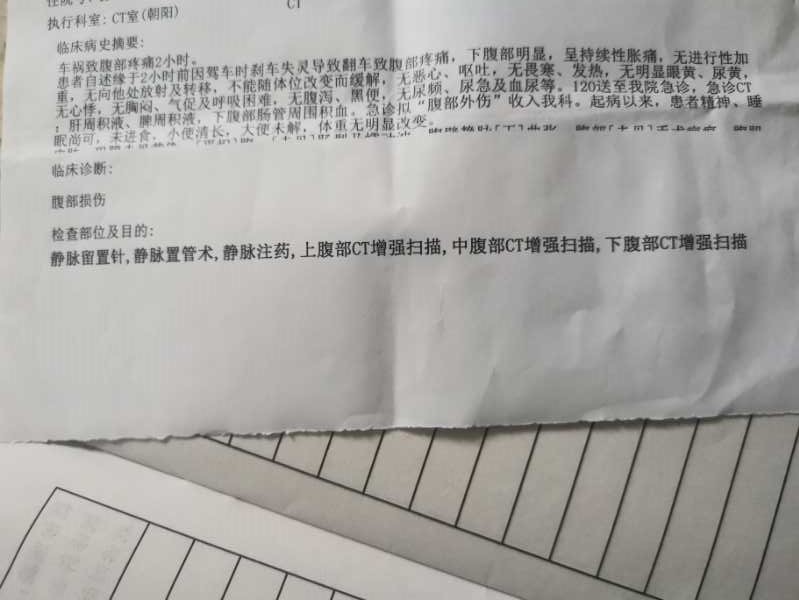 "After a visit by Tesla (Changsha) staff, who was in charge of the communication, there was no comment." Chen Yu's wife told reporters.

On June 23, the reporter called the above-mentioned Tesla staff, and the other side only said: "the matter is still in the process of processing, and the specific time when the results can be found, we still need to see the relevant traffic management department investigation and processing results."

However, the reporter found from the recording of several previous calls between the staff member and Chen Yu and his wife that the Tesla staff member had always stressed that the background data showed that there was no brake failure problem in the accident vehicle, and said that "if there is no product quality problem in the vehicle, there will be no compensation situation, it is purely an accident."

Chen Yu and his family are very angry about this. "They suspect that I mistook the accelerator for the brake, but I've been driving for more than 20 years and can't make such a low-level mistake. And the car went out of control and sped out for 8 kilometers. I couldn't have stepped on it all the way wrong. " Chen Yu said.

On June 24, the scene video of the accident vehicle alleged to be out of control was exposed. In this video, the vehicle where the recorder is located drives normally in the lane, and the blue Tesla Model 3 driving in front passes directly through the double yellow line in the two-way lane, almost colliding with the traffic.

The owner is ready to sue Tesla

Chen Yu told reporters that he was awake from the time when the car began to lose control to the time when he got out of the car and called the police and emergency call, and then to the hospital for surgery. "When the vehicle stalled, I noticed that the speed displayed on the display was 127km / h." Chen Yu said.

The above Tesla staff also said that in addition to the brake failure, Chen Yu said the speed of the accident vehicle was basically consistent with the background monitoring data.

However, some netizens speculated that the car owner may have turned on the autopilot's automatic auxiliary driving function when driving, which eventually led to the accident. Chen Yu denied that. "At that time, I chose to buy this imported model 3 because of the influence of Tesla brand. I didn't care much about its automatic driving function." Chen Yu said he had never used the function in more than a year. Recently, according to media reports, Tesla's official response to the incident said that according to Tesla's vehicle design principle, it is very unlikely that the vehicle with brake failure will accelerate itself.

But Chen Yu didn't agree with this, and stressed that "everything he said is true". If Tesla can't give a satisfactory statement at last, he will defend his rights and Sue Tesla through legal means later.

Chen Yu has no shortage of supporters. A Tesla Model 3 owner told reporters: "if it turns out that Tesla suddenly loses control and the brake fails, I think all car owners support the rights protection."

However, some netizens think that the above accident rate will be over. "All along, Tesla's domestic strategy can be summed up in six words: no public relations, no explanation. There is something wrong. We can only guess for nothing. It's just like that. " Said the netizen.

Pictures from the Internet

At present, there is no official conclusion about the accident. However, reporters found that complaints about Tesla's similar uncontrolled acceleration were not rare.

According to the AP, the petition made it clear that the vehicles complained of Tesla's "accidental acceleration" involved Tesla vehicles produced in 2013-2019, including model 3, model s and model x models. According to the report, Tesla has potential for unexpected acceleration, requesting a recall of 500000 Tesla electric vehicles.

In response, Tesla issued a statement that said: "the doubt about the potential safety hazards of vehicles is the defamation of Tesla by short sellers, and there is no 'accidental acceleration' of Tesla vehicles.".

"We analyzed the driving data of each vehicle accident acceleration event we learned, and concluded that Tesla Motors operated normally according to the design requirements in all events. That is to say, the car will accelerate only when the driver lets the car accelerate. When the driver presses the brake pedal, the car will decelerate or stop normally. " Tesla said that in the actual driving process, if the driver accidentally stepped on the brake pedal and accelerator pedal at the same time, according to the design requirements, the priority of the brake pedal will be higher, at this time, the accelerator pedal command will not take effect, the motor torque will also be cut off, and the vehicle will stop when the brake is continuously pressed.

But the loss of control of Tesla vehicles is still happening. In May this year, Tesla was complained by many car owners in China due to the sudden stall of the model 3 (including imported and domestic) motor. In early June this year, a car crash occurred on a section of Taiwan's expressway. A running Tesla Model 3 collided with a white van that was overturned in the middle of the road. The owner was using Tesla's autopilot function, but the function failed to effectively identify the forward rollover truck.

According to incomplete statistics, in recent years, Tesla has had about 25 major traffic accidents around the world, 12 of which have caught fire and 8 people have been killed in the accidents.

Related news
Tesla's official response to the collision fire after the model 3 automatic acceleration brake failed
Out of control investigation of imported model 3: Tesla denies brake failure
US Agency investigates touch screen failure or is forced to recall 63000 model s
Hot news this week
Tesla's response to the spontaneous combustion and explosion of Shanghai model 3: preliminary judgment that the accident was caused by the collision under the car
Pinplay: has filed a lawsuit against Tesla for infringing pinplay's reputation right through the Internet
China's auto chips stopped in Europe and America? Official response
Global chip crisis worsens Ford closes German factory for one month
Full screen bomb is playing crazy wechat Android version 8.0 beta version comes with download
Huawei upgrades 2021 notebook models of matebook series: 11 generation core from 5499 yuan
Girls will be tied to the doll on the back to take home during the holiday netizen: This is too caring
Intel and AMD motherboards are in chaos
NVIDIA's acquisition of arm may be rejected by one or more regulators
MIT biologists reveal why cancer cells waste so much energy
The most popular news this week
Baidu plans to split one common share into 80 shares, corresponding to HK $244.9 per share in Hong Kong
ASUS releases Pro WS wrx80e-sage se WiFi motherboard
ASUS Rog flow x13 benchmark exposure: sharp dragon r9-5950hs is 30% higher than Renoir
A big change in the office of the president of the White House: an extra piece of lunar rock (photo)
Foreign media: reviewing the decision to ban Trump's account or a major turning point for Facebook
Why increase anal swab sampling for new coronal nucleic acid detection? Experts: improve detection rate and reduce missed diagnosis
Full recovery of chip supply: CEO Zhao Ming will build his own mate and P series flagship
Intel will outsource orders to TSMC and Samsung: its GPU will use 4nm process, the source said
Samsung Galaxy note 20 Fe exposure: or the best of Note Series
Optional update for windows 10 version 1909: fix directory name invalid error