Did Huawei get approval to build a Silicon Valley plant in Britain or break the blockade?

TSMC plans to build a factory in the US, and Huawei's new progress in building a factory in the UK will come out. I like the "coincidence" of Da Pu's running. Please give me more!On June 25 local time, Huawei "guanxuan" has been approved for the first phase of its planning in Cambridge Park, UK, which is mainly used for the research, development and manufacturing of optoelectronics. The popular expression is that Huawei will establish a fourth R & D center in Cambridge, which will become the global headquarters of Huawei's photoelectric business.

As soon as the news came out, it was reported by many European media. This will "further consolidate Cambridge's position as the UK's centre of innovation," AFP reported. Techradar, the UK technology news website, said the move strengthened Huawei's ties with the UK at a time when the UK's long-term prospects were still uncertain.

Huawei has long been responsible for Huawei chip design, chip manufacturing business mainly through outsourcing to TSMC. The trip to cambridge was seen as one of the steps to reduce contract dependency, break the u.s. blockade and implement the "design and manufacture" model, under a heavy u.s. blockade.

Huawei's next move in the UK

Huawei's globalization strategy is still in-depth even though it is frequently under pressure from the US blockade.

On June 25 local time, Huawei "guanxuan" has been approved for the first phase of its planning in Cambridge Park, UK, which is mainly used for the research, development and manufacturing of optoelectronics.

According to cctv financial reports, the uk's south cambridge county council on the 25th, the remote construction planning meeting, approved the Huawei research and development center construction planning. John Bachelo, chairman of the South Cambridge County Construction Planning Association, said the project was in line with local building regulations and would create hundreds of jobs, boost local infrastructure and bring huge economic benefits to the region.

From the perspective of geographical location, Huawei's Cambridge park is located in the hinterland of "Silicon Fen" in Cambridge, England, where high-tech enterprises gather. The first phase is planned to use 9 acres of land, with a construction area of 50000 square meters. The planned investment scale is 1 billion pounds. It is expected to bring more than 400 jobs. After completion, it will become Huawei's overseas optoelectronic business headquarters.

Huawei said the first phase of the project will focus on the R & D and manufacturing of optical devices and modules. Through the integration of R & D and manufacturing functions, we can accelerate the process of product R & D and commercialization, and more efficiently push products to the market. Optoelectronic technology is a key technology of optical fiber communication system. Huawei's major investment in the UK aims to promote the application of related technologies in global data centers and network infrastructure.

Zhang Jiangang, senior vice president of Huawei, said that the UK has an open market environment and first-class talents, so Huawei chose to build a R & D and manufacturing base for optoelectronic business in Cambridge. Huawei plans to build it into a leading optoelectronic research and innovation platform integrating production, learning and research in the UK, and promote the development and global application of optical communication technology. Relying on the base, Huawei will continue to strengthen cooperation with universities and research institutions, support the "industrial strategy" of the UK, help the UK to continue to lead in optoelectronic technology, and promote the application of "UK technology" in the world.

It is reported that in the design initially submitted by Huawei in April 2019, the R & D center will build a series of buildings. After consulting local people and considering natural ecological environment and other factors, Huawei revised the original design scheme in January 2020 and resubmitted the planning application.

Similarly, Huawei's R & D center is located in the center of the silicon chip industry in the UK, only 15 minutes from the headquarters of arm holdings, the largest technology company in the UK. In contrast, silicon Marsh's chip industry and chip culture are more mature, with a complete talent supply chain, and its R & D environment is more in line with Huawei's operation philosophy.

Based on this, the construction has also been widely concerned by the UK. In May 2019, the Financial Times reported that Huawei plans to invest 1-2 billion pounds in the next five years to build and operate the R & D and manufacturing base of optical devices and provide optical devices and modules to the world.

Cooperation in the UK is still under pressure from the US

In May this year, the United States' repeated crackdown on Huawei once again attracted the attention of the whole world.

Despite the sixth extension of the temporary license to Huawei, the US Department of Commerce's Bureau of industry and security (BIS) still issued an official statement on May 15, which will strictly restrict Huawei's use of US technology, software design and manufacturing of semiconductor chips to protect us national security and cut off Huawei's attempts to break away from US export controls.

At the same time, TSMC officially announced on its official website that it plans to build and operate an advanced wafer factory in the United States with the common understanding and commitment of the federal government and Arizona. As Huawei's main supplier, TSMC's move is also seen as a response to the US policy of blocking Huawei.

Huawei has long been responsible for Huawei chip design, chip manufacturing business mainly through outsourcing to TSMC. Under siege, the trip to cambridge was seen as one of the steps to reduce contract dependency, break the u.s. blockade and achieve a "design and manufacturing" model.

Although the Huawei has been approved to build a research and development center in the UK, there is no shortage of US pressure in the process. According to the British Times, the U.S. Under Secretary of State for Economic Growth, Energy and Environment, Keith Cratch, warned Britain to go "downhill" and accused Huawei of stealing technology and intellectual property rights from other countries.

In response, Zhang said that the UK R & D center will only focus on the R & D and manufacturing of optoelectronics. This is what Huawei envisioned three years ago. It has nothing to do with any recent US action. Any reference to the violation of unreasonable US sanctions by the project is irresponsible and incorrect.

In a previous BBC interview with Ren Zhengfei, Ren once said that if the US does not trust Huawei, Huawei will transfer investment to the UK on a larger scale. The UK government has concerns about Huawei, but it does not affect Huawei's investment in the UK.

According to the analysis of the insiders, although the UK's domestic capacity in conventional semiconductor production is not outstanding, it still has a strong strength in compound semiconductor production. Industry giants such as Oclaro are all British companies. Universities in the UK have strong strength in this field, and there are many start-ups. The arrival of R & D center in Cambridge is conducive to more in-depth cooperation.

In fact, from the perspective of globalization, Britain has long been Huawei's focus. Public information shows that in addition to the Cambridge R & D Center successfully applied for this time, Cambridge has established R & D centers in Epps Vecchi, Bristol, London and other places in the UK, and maintains close contact with a number of universities and research institutions in the UK, including imperial Polytechnic University, University of Surrey, Manchester University, University of Cambridge, etc.

According to Huawei's annual report in 2019, the company's R & D cost in 2019 is 131.7 billion yuan, and the cumulative R & D cost in recent ten years is more than 600 billion yuan, accounting for 15.3% of the sales in 2019; in 2019, there are about 96000 people engaged in research and development around the world, accounting for 49% of the total number of Huawei; there are more than 50000 valid authorized patents outside China, including 40000 in Europe and America Multiple. 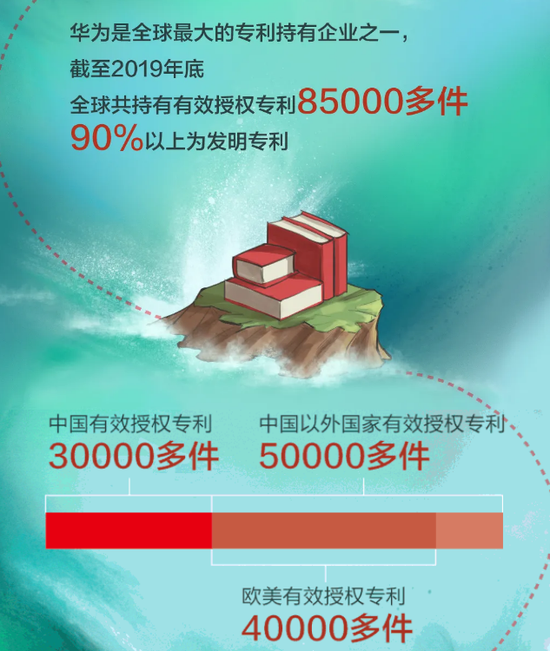 Although the overseas development is besieged by the United States, Huawei's globalization strategy has not been affected. In the face of various difficulties, 5g construction may be one of the important breakthroughs for Huawei to explore.

British Prime Minister Boris Johnson convened the British National Security Council in January to discuss whether to allow Chinese companies to participate in five G of UK networking, European media reported. Mr johnson announced after the meeting that britain had decided to let Huawei play a "limited" role in building its five G network. Huawei can participate in the construction of peripheral networks, the highest market share of 35%.

At the same time, the European Union also released important signals for HUAWEI to participate in its 5G construction. According to a senior EU official, the EU will not prohibit Huawei from doing business in Europe, but will make "strict" rules on this.

However, after the US imposed new sanctions on Huawei in May this year, the British government began to reassess the impact of Huawei's participation in 5g network construction, and the review of Huawei's role in the infrastructure construction of British Telecom has also been strengthened. According to European media, the UK government's communications headquarters are satisfied with Huawei's risk-free results. At present, Huawei's Toolkit in the UK is monitored by a special monitoring department in Banbury, UK.

When the government is ambivalent ,Huawei's efforts to build five G in britain have been recognized by the industry. Recently, Scott Petty, chief technology officer of British trans-telecommunications company Vodafone (Vodafone), publicly said in an email statement that if mobile operators were forced to spend time and money replacing existing equipment, Britain's leadership in G 5 areas would be lost. The British government should try to expand the coverage of five G instead of stripping off equipment Huawei by telecom equipment manufacturers, he said.

According to the assessment results of assembly research in 019, for British operators, if Huawei network equipment is completely replaced, it will cause 18 to 24 months delay in the construction of 5g in the UK, and bring 4.5 to 6.8 billion pounds of losses. This is also the reason why Huawei is "supported" by telecommunication companies in the UK.

In the near future, the United States has suddenly let Huawei go. On June 19 local time, the US Department of Commerce officially allowed Huawei to participate in the infrastructure construction of some 5g infrastructure in the US. In consideration of Huawei's concern in participating in 5g standard formulation, the new rule modifies the entity list and re authorizes Huawei's relevant technologies that have not passed before. 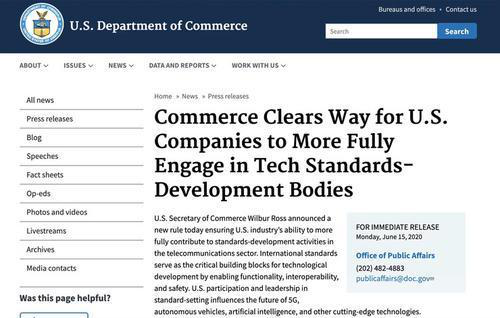 In response to Huawei's participation in overseas 5g network construction, on June 22, Chinese Foreign Ministry spokesperson Zhao Lijian responded at the regular press conference of the Ministry of foreign affairs that China's position on 5g technology is clear and consistent. The Chinese government has always encouraged Chinese enterprises to carry out foreign economic cooperation on the basis of complying with international rules and local laws. It also hopes that relevant countries can provide a fair, just and non discriminatory environment for Chinese enterprises to operate locally.

However, Huawei's 5g construction overseas is not smooth. Recently, according to Bloomberg, Singapore's largest telecom operators chose Ericsson and Nokia as their major 5g network providers. However, Singapore's minister of communications and information, iswalan, also publicly stated that it did not explicitly exclude any suppliers.

At a time when the global 5g construction is in full swing, it remains to be seen whether Huawei can completely break the foreign blockade with 5g.