After the Kwai Yin government announced that the ban includes overseas applications such as Tiktok, UC browser, WeChat, tiktok overseas, Kwai, Baidu map, and map 59 China Internet Corporation, the series of consequences have already been revealed: India's government has issued a notice.After the ban was issued, tiktok has taken the initiative to remove its shelves from the IOS app store and Google play, and has actively banned Indian users from accessing apps and websites; other apps have also been listed on the list of IP addresses banned by the Ministry of telecommunications of India. Previously, we have reported that the Indian government issued a media announcement on its official website, saying that "the government has banned 59 mobile applications, which are detrimental to India's national sovereignty integrity, national defense security and public order". China is not mentioned in the full text of the announcement, but according to the list of banned applications attached, these applications are basically developed by Chinese Internet companies. 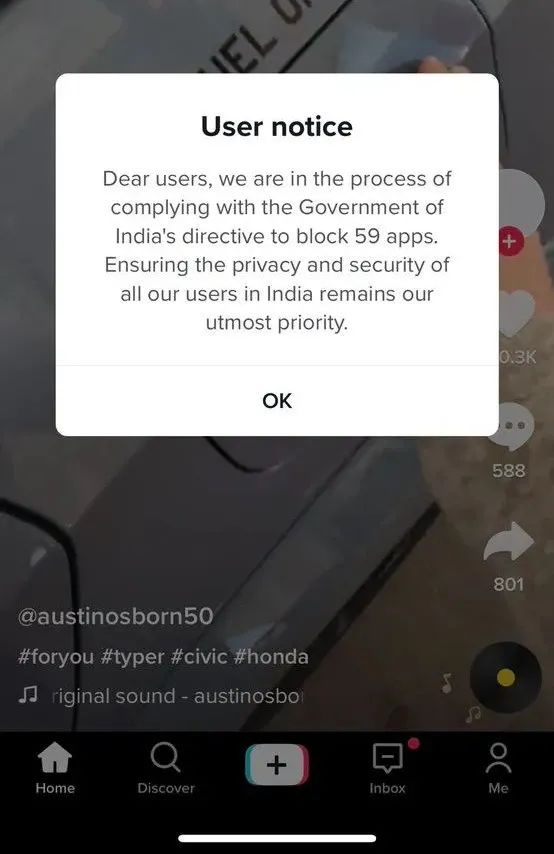 Many users said that when they opened the tiktok app, an error message would pop up, pointing out that the app was subject to the ban of the Indian government and could no longer provide services. Opening tiktok's website in India will prompt a similar message.

However, other apps on the ban list could still be downloaded and opened, including Alibaba's UC browser and cross-border e-commerce clubfactory.

Then, late Tuesday local time, the Department of telecommunications formally gave operators instructions to shut down access to these apps in India.

According to the media ettelecom, the Ministry of telecommunications of India has provided Internet service providers with two lists, including the domain names and IP addresses of the 59 apps mentioned above. Operators are required to prohibit access to these domain names and IP addresses, and require them to submit a compliance report immediately to prove that they have made the above-mentioned treatment.

Before the Ministry of telecommunications of India officially provided the order to operators, the banned companies had different reactions: for example, tiktok, the most prominent one, chose to take the initiative to take off its own app in the app store of IOS and Android, and banned Indian users from visiting, but other apps were still in the state of being accessible and downloadable.

According to techcrunch, tiktok has 200 million monthly users in India. It has been downloaded and installed 2 billion times worldwide, of which India contributed more than 600 million. Other apps on the list are also very popular in India. Together with 59 banned apps, there were more than 500 million monthly active users last month and 330 million downloads in the second quarter of this year.

Related news
Foreign Ministry's response to India's ban on Chinese app: China's strong concern
59 Chinese apps banned in India
India has banned 59 popular Chinese apps, but Indian chicken eaters are relieved
India's ban on 59 Chinese apps may cause byte jitter loss of more than $6 billion
Ban 59 Chinese apps! India's millions of fans: losing their source of income
59 Chinese apps banned, India's Internet appears a lot of vacuum zone
After 59 applications such as wechat and QQ, 47 are banned in India and 275 are still under review in China
After 59 apps such as wechat and QQ, Google and Apple's Indian app store will be removed from Baidu and Weibo
Maybe next year you'll get an iPhone 12 labeled "made in India."
Hot news this week
Huawei Chinese Academy of Sciences key EUV lithography machine? ASML Chinese Engineer: Arabian Nights
Baidu curiosity night ignites 10.8 billion people to participate in interaction and redefine science and technology evening party
Has soared to 54,000 Wechat and downloads surged in the U.S. over the weekend
The AirPods Studio is said to be equipped with a U1 chip, ultra-broadband, which is said to be critical to future apple ecology
Tencent: existing wechat users in the U.S. may continue to use but cannot obtain new users, and will continue to negotiate
Baidu curiosity night show AI black technology every one is worth your curiosity
Samsung Galaxy S20 Fe has been first exposed in the video
"Earn 100 yuan a day on wechat" unfair competition was sued by Tencent and the court awarded 20 million yuan
Beijing Xiangyun Zhitong presents in 2020 China call center and enterprise communication conference
New patents show that in the future, iPhones can take better underwater photos through automatic optical analysis
The most popular news this week
LG recalls 9434 OLED TVs in China: overheating can lead to blackening and melting of back plates
Tesla buys another 381 acres of potential battery plants near the Austin super factory
Baidu Special Adviser Shi Youcai was taken away by Jiaxing police or promoted by gambling website
Always lose money make friends Ali 88vip exclusive cooperation Nike: AJ first launch on tmall!
Foreign media concern: China's new crown vaccine production will reach 1 billion doses next yea
Cost control? Analysts suggest that the iPhone 12 Mini may be available in 4G
Amd RX 6000 graphics card specification exposure: main frequency up to 2.5GHz, performance is significantly lower than RTX 3080
Google Japan account confirms pixel 5 local price
Bank of China written examination for higher mathematics and quantum mechanics netizens Tucao: make complaints about tellers so difficult?
Third party iPhone 12 20W PD fast charging bulk shipment