This led to colleagues on this floor have gathered around to see the excitement, they still carry the bright? Pig killing knife?!!

The same piggery piglets, why too anxious to eat meat!! 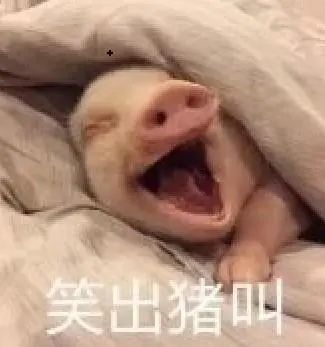 The first time a pig barks

The incident originated from a piece of information from the Chinese judicial document website.

According to the information, the people's Court of Nanshan District of Shenzhen issued a civil ruling, agreeing to the plaintiff Tencent's request to seal up and freeze the property worth 16240600 yuan in the name of the defendant Laoganma company.

According to the announcement, the court held that the application of the plaintiff (Tencent) was in line with the legal provisions, and ruled to seal up and freeze the bank deposits worth 16240600 yuan in the names of the defendants Guiyang Nanming Laoganma flavor food sales Co., Ltd. and Guiyang Nanming Laoganma Flavor Food Co., Ltd., or to seal up or detain their equivalent property.

In addition, some media reports revealed that the source of the two mischief or because of the game "QQ flying car.". According to media reports, in April 2019, the spring match of QQ flying car mobile tour s League opened. QQ flying car announced that it would cooperate with Laoganma, a national hot sauce brand. Laoganma will become the latest industry annual partner of s League, which is the first cross-border cooperation between Laoganma and E-sports.

Subsequently, Tencent responded to Netease technology and other media, saying that this was the case of Lao Ganma who put in tens of millions of yuan of advertising in Tencent, but ignored the contract for a long time, and Tencent was forced to sue according to law and applied for freezing the amount of arrears due from the other party.

Tencent specifically explained that in March 2019, Tencent signed a joint marketing cooperation agreement with Laoganma company, in which Tencent put resources into the promotion of Laoganma hot pepper series. Tencent has fulfilled relevant obligations according to the contract, but Laoganma failed to pay as agreed in the contract. Tencent repeatedly urged but failed to make a lawsuit, so it had to sue in accordance with the law. At present, the case is in the specific trial process of the court.

But, for this advertisement, the national goddess old Ganma does not recognize!

According to the news on June 30, the relevant person in charge of Laoganma company said in response to the first financial reporter that the company did not have any cooperation with Tencent.

Regarding this matter, Laoganma company believed that Tencent company had been cheated, and said Laoganma had reported the case to the police and would issue a statement later. 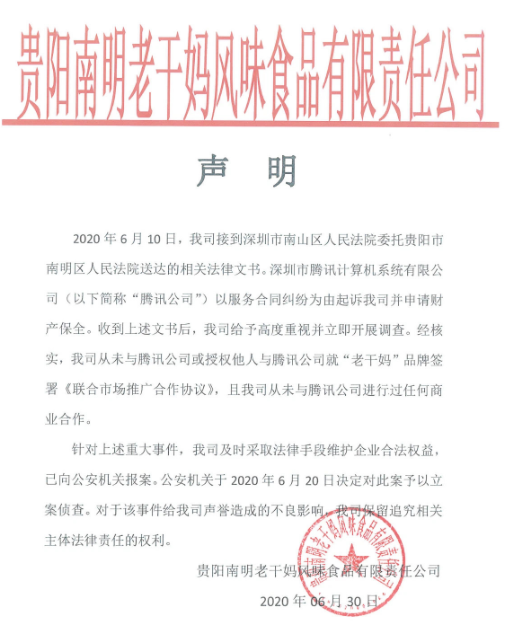 Lao Ganma said in a statement that the case has been reported to the public security organ, which decided on June 20 to file the case for investigation.

Briefly explain the BYD Li Juan incident, which was also called BYD's advertising door. On July 12, 2018, BYD suddenly issued a statement on Li Juan and others carrying out relevant business in the name of BYD.

That night, Shanghai Jingzhi Advertising Co., Ltd. released an article saying that the contract fraud identified in BYD's statement lasted for three years, involving at least 25 advertising suppliers, with a cumulative amount of 1.1 billion yuan. Competitive intelligence advertising cited a number of certificates, it is said that BYD for Li Juan's marketing activities can not be unknown.

In media reports, Li Juan, the key figure in the whole incident, plays a role in front of BYD's headquarters as a supplier who generously presents a large number of free advertisements for small amount of investment, and also acts as a member of the marketing department of BYD in Shanghai, soliciting suppliers to undertake a large number of projects, and then owes another sum of advance money for activities.

According to the report, Li Juan attracted the attention of BYD's headquarters through free investment in the early stage. After a series of cooperation with BYD headquarters, Li Juan successfully entered the supplier library of BYD, and then used BYD as an endorsement to attract suppliers for financing through high intermediary fees and high interest rates on the basis of cooperation. 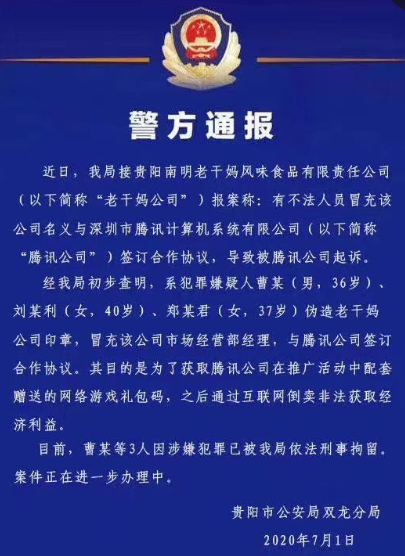 But the problem still remains: Lao Ganma seldom advertised before. How could Tencent believe the three suspects?

Lao Ganma is a hot sauce brand founded by Tao Huabi. From 1998 to 2014, Tao Huabi raised the output value of Laoganma from 50 million yuan to 4 billion yuan.

Laoganma has become one of the favorite products of Chinese people, and even popular abroad: it is said that the combination of Laoganma and Ma Yinglong is the hard currency of American prisons (the report editor in chief, this is news, not advertising).

She also does not like to do propaganda, not only does not publicize in the mass media, never accepts interviews, nor does she advertise her products.

But why do the suspects who forge the official seal of Lao Ganma win the trust of Tencent?

This may have something to do with the handover of Lao Ganma.

In March 2014, it was reported that Lao Ganma's equity structure was as follows: Tao Huabi held 1% of the shares, with her eldest son holding 49% and her younger son holding 50%. However, in June 2014, Tao Huabi's name was deleted from the list of shareholders, and Tao Huabi began to retire behind the scenes.

After Tao Huabi's two sons took the helm, Lao Ganma's business strategy began to change and began to do all kinds of marketing. For example, at the New York Fashion Week in 2018, Laoganma and openingceremony jointly launched a sweater with a price of $120, which caught the eye.

In 2019,The appearance of a magic MV of "twist the dry mother"The video of earth flavour has aroused public concern again. 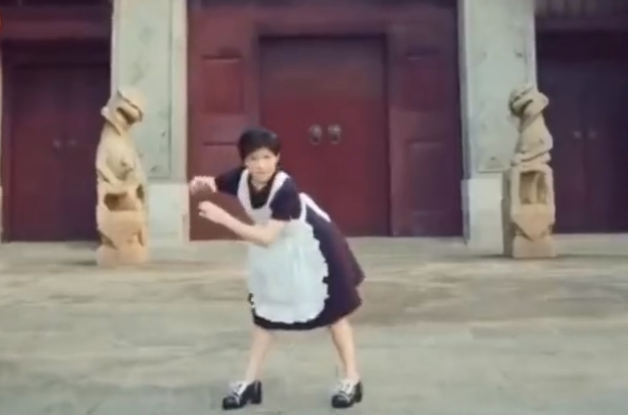 Not only that, the product line of Laoganma is still expanding. From the previous single Douchi hot sauce, it has been transformed into a full range of products, such as spicy vegetables, fermented bean curd, hot pot seasoning and so on. 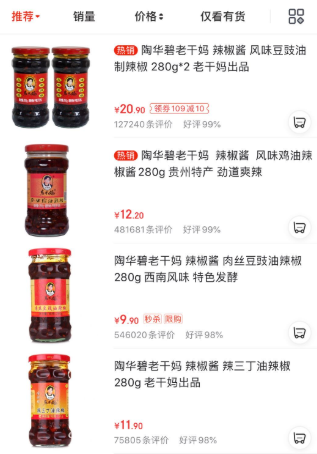 However, the results after the change do not seem to be ideal. In 2016, the sales volume of elderly Ganma has exceeded 4.5 billion yuan, but it has dropped by 200 million yuan in 2018. Therefore, in 2019, Tao Huabi returned to Laoganma and successfully raised the revenue to 5 billion yuan.

Under the high exposure of Tencent's lawsuit, can the national goddess Laoganma return to the old Ganma?

The price of charged sonic electric toothbrush coupon is 7.9 yuan

Related news
Google announced: I / O development conference held on May 12
Google announced the complete cancellation of I / O developers conference including online activities due to the epidemic
I need an urgent love spell caster 2020 PRIEST ADE
Hot news this week
Huawei Chinese Academy of Sciences key EUV lithography machine? ASML Chinese Engineer: Arabian Nights
Has soared to 54,000 Wechat and downloads surged in the U.S. over the weekend
"Earn 100 yuan a day on wechat" unfair competition was sued by Tencent and the court awarded 20 million yuan
Samsung Galaxy S20 Fe has been first exposed in the video
Beijing Xiangyun Zhitong presents in 2020 China call center and enterprise communication conference
New patents show that in the future, iPhones can take better underwater photos through automatic optical analysis
2K touch screen AMD sharp dragon logo sold 4999 yuan: Huawei four new products will be available tomorrow
Qualcomm officially announced the first marriage of snapdragon 750g 5g: a77 big core and Xiaomi's debut
Microsoft's Chromium Edge to force updates to slow down Windows 10 system and even prolong startup times
Tesla Model 3 standard upgrade with open rear seat heating option can be completed at home
The most popular news this week
Tencent's "brick" mooncake is free! Come and grab it
Chinese consulate: you can still use wechat normally in the United States, and you can use small programs to extract nucleic acids for detection
Global Times: SMIC has also been targeted by the United States. What should China do
Ren Zhengfei: never hate the United States and learn from the enemy
Ni Guangnan: will the Ministry of Commerce possibly approve the acquisition of arm by NVIDIA
After the U.S. crackdown Huawei the transfer of U.S. investment to Russia
The total cost of a TSMC 5nm chip exceeds 2900 yuan?
China's first chip stamp: 120 micron ultra thin NFC
NASA awarded SpaceX a $109.4 million interstellar mapping contract
Shanghai Municipal Government signed with Huawei today! Project of Qingpu R & D Cente