It's one thing for the stock market to rebound sharply after a quarter of a month's fall, as was the case in March. It's another thing to continue to do so after soaring back to record highs.However, this is exactly what happened to the largest US tech stocks, which have just gone through one of the best weeks of the recovery.

Nothing is more strange in a market frenzy: in mid-2020, the Nasdaq 100 is not only back in a positive range, but also in its best year in the past 20 years. The biggest companies in the United States not only survived the popular blockade, but also greatly expanded their advantages. Investors flocked to large and stable companies.

"The virus brought those companies forward two or three years," says Gary Bradshaw, portfolio manager at Hodges capital management in Dallas. Although the contrast to the state of the economy is surprising, "in an environment of very low interest rates, you're buying the best growing companies in the world."

The Nasdaq 100 index rose again last week, closing more than 600 points above the stock market flash crash triggered by the epidemic. The ratio of the index to the S & P 500 index has just surpassed that of the Internet bubble era. 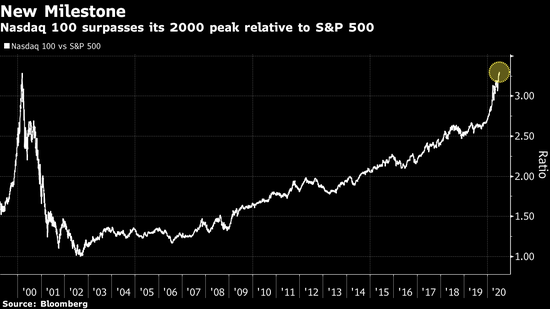 Few foresaw this. Before the coronavirus swept the world, when everything was ok, Wall Street was confident that overvalued technology stocks would bear the brunt of the bull market crash. This is not the case. On the contrary, the industry's strong balance sheet and automation, "home office" features, immune to this year's "bloody" stock market.

Investors are increasingly dependent on large stocks. Before rising 0.6% on Thursday, the Nasdaq 100 index was up more than 1% in the first three days of the week, the highest in more than a year. The index is up 492 points, or 5%, on Thursday, one percentage point higher than the standard & Poor's 500 index.

As the second half of this year begins, the strong returns from technology stocks are becoming more and more difficult to ignore. With the stock market falling across the board, the Nasdaq 100 index is up 18%, which makes other stock markets lag behind. The performance gap between the tech heavy Nasdaq 100 index and the S & P 500 index was 21.5 percentage points, the largest since records began.

Of course, skeptics say these popular stocks have gone too far and too fast. Some momentum indicators support this. The rally has pushed the Nasdaq 100 above its 200 day moving average at a premium of nearly 20%, which is in line with the market's peak in February.

"Surprisingly, despite the concerns of US regulators, investors continue to invest in large cap technology stocks. "The stock market is so disconnected from the fundamentals that it's hard to have a real conversation," says Yousef Abbasi, global market strategist at stonex 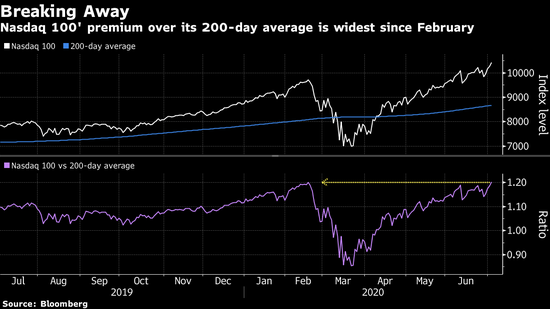 If you look back 20 years ago, another milestone was reached this week: the Nasdaq 100 outperformed the 2000 high against the S & P 500. For sceptics, just this scene reminds us of the collapse of the Internet bubble.

That's part of why Hodges Capital Management portfolio manager Gary Bradshaw continues to hold shares in some of the big companies in his portfolio, including Apple, Microsoft, Amazon and Facebook..

"Profits and revenues are growing, and cash flow is growing faster than most other companies," Bradshaw said. He said: "this is not the same as the Internet bubble in March 2000, because at that time, many of these companies were burning money."

Shares in Facebook, Amazon, Netflix and Google's parent company alphabet, known as "Fang," tumbled more than 5% on Friday, after rising 7.6% since Thursday, the best week since April. 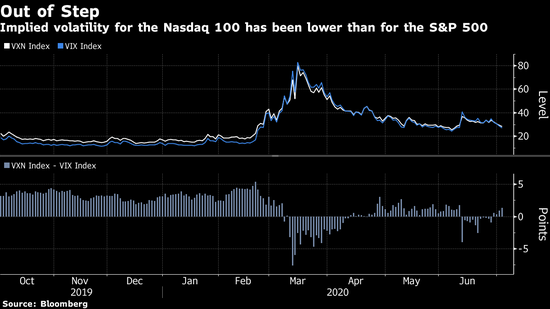 However, investors are now worried about the volatility of the Nasdaq 100 index, which has been lower than the S & P 500 index for 12 consecutive days, the second longest downward trend so far in 2011. The CBOE NDX volatility index (vnx) is usually higher than the CBOE volatility index (VIX). In the past five years, there has been an average price spread of three points. But this year, due to the influx of investors into large stocks and technology stocks, the gap between them has narrowed to one third. This means that the market's "panic level" of technology stocks is less than that of the S & P 500, that is, optimism is very high, reflecting the high price of technology stocks.

Tim Courtney (Tim Courtney), Exencial Wealth Advisors's chief investment officer, said :" I' m a little worried about the increase in the whole market, especially the Nasdaq market ." "If large growth stocks were valued relative to the market, or large value stocks and small value stocks, the valuation would certainly return to the Internet bubble of the 2000s. "