The first melon in the second half of 2020, contributed by the national game company Tencent and the national hot sauce company old godmother. Since the afternoon of June 30, events have been reversed, staged Tencent sued the old godmothe 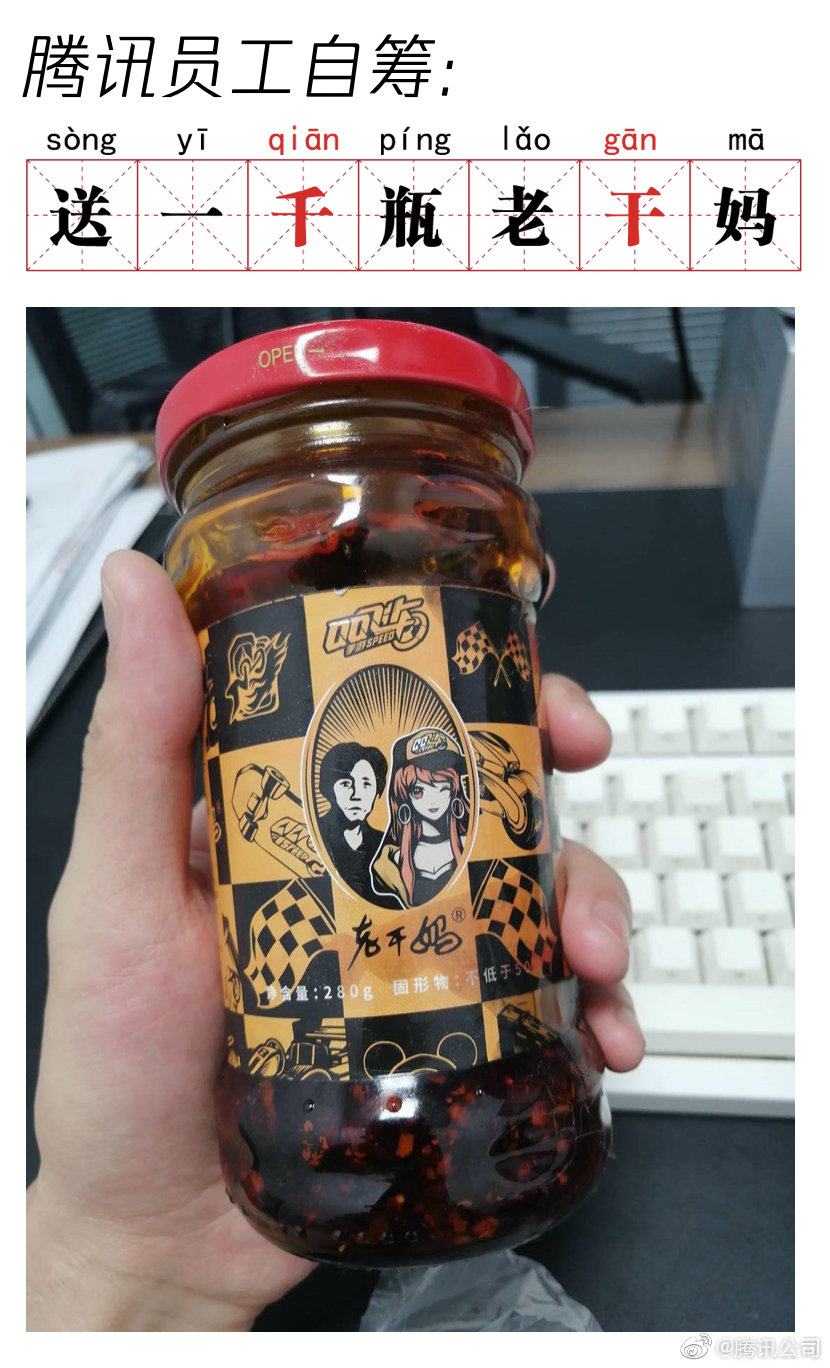 The latest news is that Tencent officials have been fooled by social media statements. On the evening of July 1, Tencent mocked itself on official Weibo

The storm has come to an end temporarily, but this highly concerned event involving 16 million yuan has not been completely ended. At present, there are still many doubts in the outside world. As a big company with the largest market value of China's Internet company, which has been established for 22 years and has an annual income of 377.3 billion yuan, why could Tencent be cheated by three people for 16 million yuan, and what links have gone wrong? For the contract dispute of RMB 16 million, the two big companies did not communicate well in advance. Instead, they finally had a dialogue with the police through the court. How did the two sides communicate? Are there any loopholes in the internal management of the two companies? These doubts need to be further clarified by both parties. Our reporter will continue to pay attention to it.

The plot turns in succession

Tencent and the old godmother contract storm, known as netizens

Tencent sent a B message on July 1

Tencent Laoganma storm caused heated discussion, in addition to the two major companies with national character, the event is inconceivable, the successive reversal is also dazzling.

On June 30, the people's Court of Nanshan District in Shenzhen issued a civil ruling, agreeing to the plaintiff Tencent's application for property preservation, and sealing up and freezing the property of the defendant Laoganma company worth 16.2406 million yuan, according to China judicial document network. Tencent told reporters that it was the old Ganma who invested tens of millions of yuan in Tencent's market cooperation, but ignored the long-term default of the contract, Tencent was forced to sue in accordance with the law, apply for asset preservation, and the court ruled to freeze the other party's enterprise account.

On the evening of June 30, the old godmother made her voice

On July 1, the police of Shuanglong branch of Guizhou Public Security Bureau reported that Cao and other three forged Laoganma's official seal and pretended to be the manager of Laoganma's marketing department and signed a cooperation agreement with Tencent. Its purpose is to obtain Tencent company in the promotion activities of supporting the network game gift code, and then through the Internet reselling illegal economic benefits. At present, Cao and other three people have been detained according to law for suspected crimes.

At present, the case is being further handled, and the dispute between Tencent and Laoganma has come to an end.

The storm still has doubts

Although the temporary end, but Tencent and the old godmother two companies about 16 million contract caused by the storm, there are still a lot of difficult doubts.

Game code is a product often launched by game companies. A middle-level player of a game company told reporters that there are several forms of game code. First, before the public operation of some games, there will be several closed tests. Players with activation codes can play the game ahead of others. Second, there may be some special props in the game.

The reason that police inform Cao Mou 3 person impersonates old godmother, is in order to obtain game code, several game industry personage can not understand very much. The reason is that even if three people cheat the game code, but also to sell to profit, in the process, Tencent can let the game code invalid at any time, if found by Tencent, three people may not be able to profit.

Another puzzling question for the outside world is that Tencent is not a small unknown company, but a large company with the largest market value of China's Internet company. It has been established for 22 years and has an annual income of 377.3 billion yuan. Why can Tencent be cheated by three cheaters for 16 million yuan?

The current challenge is mainly Tencent legal team, do not understand why the huge success of Tencent legal affairs in the old godmother incident suffered Waterloo. Reporter to several large Internet company legal personnel consultation, several people told reporters, the official seal problem is not legal review, the problem is in the business team. A lawyer said,

According to the information released by Tencent and query Tencent and Lao Gan Ma cooperation facts, the project is Tencent's game products QQ flying cars, a game circle told reporters, at that time QQ flying car team held a special press conference, but also specially stressed at that time, is the first time Lao Gan Ma advertising. He was impressed. QQ what is the problem with the flying team? Why can Cao Mou 3 people deceive? Why didn't you check each other's qualifications? These details are not yet answered.

In addition, the massive advertising promotion, whether Laoganma is aware of it, is also a topic of concern to the outside world. The joint marketing cooperation agreement signed between Tencent and the fake Laoganma team took place in March 2019. After that, Tencent has fulfilled the contract and lasted from April to October. Zhao Zhanzhan, a special research fellow of the e-commerce research center of e-commerce and deputy director of Beijing Zhilin law firm, questioned: after signing the promotion cooperation agreement, Cao and other three provided a number of materials, including videos, needed for promotion, which should come from Laoganma company; moreover, Tencent's publicity and promotion of Laoganma has lasted for a long time, and Laoganma is complete The possibility of not knowing about this is very small, and the motivation of not negotiating with Tencent is also questionable.

The most incomprehensible doubt is how the two companies communicated in this incident. Tencent said that Laoganma did not pay according to the contract, and repeated urging failed, but Laoganma said that Tencent had never collected money, and the court ruled that the company did not know. For the dispute of 16 million yuan, the two big companies did not communicate well in advance. Instead, they finally had a dialogue with the police through the court. What's the problem? Are there any loopholes in the internal management of the two companies? These doubts need answers from both companies.

Where does the case go

In response to the voice of Lao Ganma and Guizhou Police, Tencent has not disclosed more information except from black short videos and microblogs. Combining with the existing information, Wu Bin, commercial principal lawyer of Tianjin Zhaorong law firm, believes that there will be several trends in the future.

Wu Bin told reporters that if the old Ganma salesman contacted with Tencent is a salesman in the early cooperation between Laoganma and Tencent, or there are other circumstances that make Tencent have reason to think that the salesman has the authorization of Laoganma, it may constitute an agency by estoppel, and Laoganma will have to bear the contract payment obligation.

If Tencent does not have sufficient reasons to believe that the salesman is Lao Ganma's staff member, and the official seal is fake, then Tencent can not be sure that Tencent has established a sales contract relationship with Lao Ganma, and Tencent has no reason to seek Laoganma for money. He explained that Tencent could not find the cause of the case to recover money from Lao Ganma, because the reasons for the debt were generally contract, infringement, unreasonable management and unjust enrichment.

At present, Guizhou Police have filed a case and informed Cao that three people forged the official seal. Wu Bin told reporters that the official seal is false, which can overturn the sales contract relationship between the two parties. If the sales contract relationship is overturned, Tencent's case of suing Laoganma may be rejected by the judgment, and the probability of civil cases turning into criminal cases may be greater.

According to Guizhou police report, Cao and other three forged Laoganma's official seal and pretended to be the manager of Laoganma's marketing department and signed a cooperation agreement with Tencent. Cao Mou three people forges the official seal and swindles, what crime is suspected? Zhao Zhanzhu told reporters that the crimes committed by the three people mentioned in the police Circular include privately engraving company seals and contract fraud. Privately engraving company seals is a means to make up facts, cheat Tencent to sign contracts and give game gift codes. Legally, they are implicated criminals and should be convicted and sentenced for the crime of contract fraud.

In addition, Tencent has fulfilled a contract worth 16 million yuan in 2019 to invest resources and materials to promote Laoganma brand. If Laoganma does not bear the responsibility, who should bear the loss of Tencent? Wu Bin told reporters that Tencent's losses were caused by specific suspects. If the case is indeed a fraud case, Tencent's losses should be borne by the criminals.

Related news
Decrypt the "war epidemic" blowout cloud office industry! PK of Huawei Ali and other five giants
Tencent PK old Ganma: the storm is suspended, the question remains
Hot news this week
Microsoft dev version win11 will not be updated next week or prepare for the new version of android app
Nanjing epidemic spread to Beijing ChinaJoy game exhibition emergency announcement: all members can enter
The founder of Ethereum made $1 billion in counterfeit money for charity: it has shrunk to $400 million before it has arrived
In 2021, four of the top ten films at the global box office came from China: "Hello Li Huanying" became the first domestic film at the box office
Kwai tau: magnetic Taurus creates a one-stop marketing solution for electric business. Taurus service providers offer four incremental values.
All the people are chasing the same champion! Sales of "lucky hair accessories" of Yang Qian on JD platform increased fourfold
Ticket skipping 14 years of space rescue 8 days Russia's "science" successfully docked with the International Space Station
Microsoft: win11 is very popular and the official version will be released as scheduled in the autumn
Jingdong healthy skin repair center went online to help promote the diagnosis and treatment standards of burns and wounds nationwide
Amd radeon RX 6600 XT new graphics card debut set off a small climax on the first day of ChinaJoy 2021
The most popular news this week
The configuration requirements of the seventh legend of the fairy sword and the fantastic Xia are announced: the opening light needs RTX 30 series graphics cards
The game "spiritual opium" was quietly restored by the central media: delete the words "electronic drugs"!
High play challenge Ruilong 5000 APU limit memory performance delay as low as 42ns
Microsoft 365 Home Edition 50% discount promotion
Japanese professor artificially made variant delta virus: more deadly
What is COVID-19's breakthrough infection? Expert: the vaccine protection rate is not 100%
Scientists have confirmed that the ramda strain is more infectious: it can also reduce the protection of the vaccine
Bid farewell to the difficulty of choice. Suning Tesco has a better reputation than parameters and prices
Baidu announces energy conservation and emission reduction report card: help the transportation industry reduce carbon emissions by 10 million tons per year
Who says that only young people love secondary culture? Grandpa and grandma wear Hanfu to play games