On July 6, Zhuanzhuan group released the mobile phone market report in the second quarter of 2020 (hereinafter referred to as Q2 "mobile phone market") todayWith the launch of several low-end models in the new machine market, the price of 5g mobile phones has continued to be "low", and the 1500 yuan mark has been broken through. However, in the context of the overall decline in shipping volume, 4G mobile phones with constant price reduction and promotion still occupy the leading position in the new machine market.

According to the report, from the perspective of the whole new machine market, 5g mobile phones are the leading role, and the price has been "low" again and again. At present, the starting price of a number of 5g middle end mobile phones is below 2000 yuan, and the actual price of some models has exceeded 1500 yuan. With the release of more low and medium-sized 5g chips and the application of corresponding models in the third quarter, the official starting price will be significantly lower. 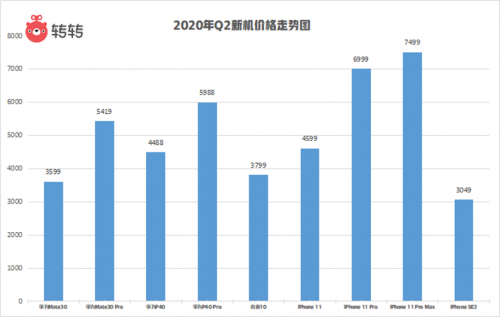 Analysts in the transfer strategy research section said that the second quarter is a stage of market recovery. Manufacturers hope that sales will return to the right track. In addition, 618 is the traditional mobile phone 3C product promotion node, which can exchange sales volume and improve market confidence through price reduction. Moreover, the price reduction of new machine market will inevitably trigger chain reaction in the second-hand market. 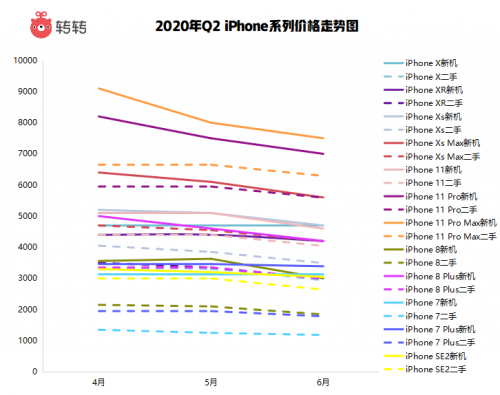 According to Q2 "mobile phone market", the top 10 second-hand mobile phone transaction volume in the second quarter was iPhone. Among them, the old models of iphone7, iphonex and iphone8 plus occupy the top three positions. In addition, the release of the new iPhone se has also driven the search volume of the iPhone se. In the second quarter, the search volume of iPhone se continued the trend of the previous quarter and continued to rank the first, surpassing the popular new models such as iPhone X and iPhone 8 plus. It is worth noting that the same small screen classic model iPhone 7 has become the second-hand "king of the machine" in the new season.

According to the analysts in the transfer strategy research section, the iPhone 7 can "counter attack" replace the iPhone x, which has ranked first in the second-hand market for several consecutive quarters. The main reason is that when the price drop of the new iPhone market and the domestic mobile phone share of the market lead to the short-term growth of the replacement demand, the demand of the sinking market is gradually booming.

The price of 5g new machine is also going down all the way. Among them, redmi 10x has lowered the official starting price of 5g mobile phones to 1599 yuan. During the period of 618 promotion, the actual selling prices of some 5g new models dropped to less than 1300 yuan.

Although 4G mobile phones still occupy the dominant position in the second-hand market, the number of users choosing second-hand 5g mobile phones is increasing, according to analysts in the research section of transfer strategy. With the continuous improvement of 5g network coverage, the optimization of mobile phone hardware configuration and the complete coverage of high and low end mobile phone prices, the opportunity of 1000 yuan will come soon.

In addition, from the Q2 "mobile phone market" point of view, the second-hand mobile phone trading hot cities are still Shenzhen, Guangzhou, Dongguan, Chongqing and Beijing. Among them, Beijing's ranking has declined, from the first in the last quarter to the fifth. Analysts in the transfer strategy research section said that the first and second tier cities still occupy the mainstream of transactions, but at the same time, the potential of low-level cities is constantly bursting, among which the third to sixth tier cities are still the main buyers. Among them, male users prefer iPhone x, while female users prefer to buy small screen iPhone 7. According to the analysts in the research section of transfer strategy, the small screen configuration of the iPhone 7 is more suitable for women to hold, and with high cost performance, it can give female users a better use experience. 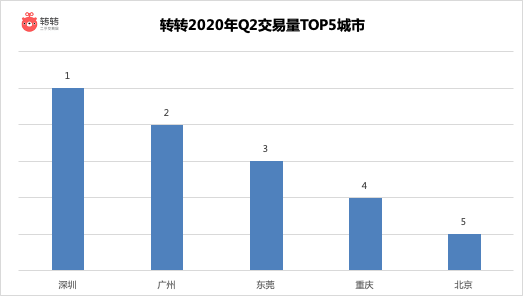