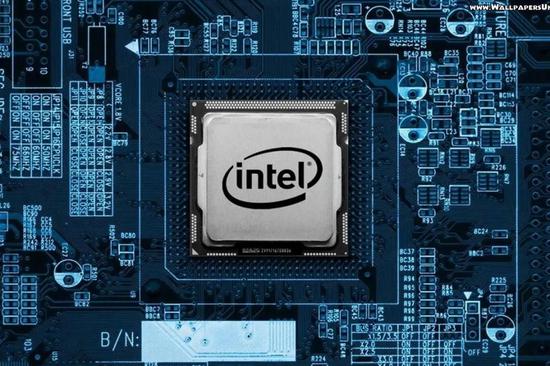 Following micron, Intel announced its second quarter 2020 results on July 24, Beijing time. From the financial report, Intel's revenue and net profit exceeded market expectations. However, Intel's share price fell more than 10% after hours due to a lower than expected earnings per share outlook for the third quarter and a further delay in the production of 7Nm chips.

So, what is the core data of Intel's second quarter financial report?

-The adjusted earnings per share was $1.23, which also exceeded the market expectation of $1.12; 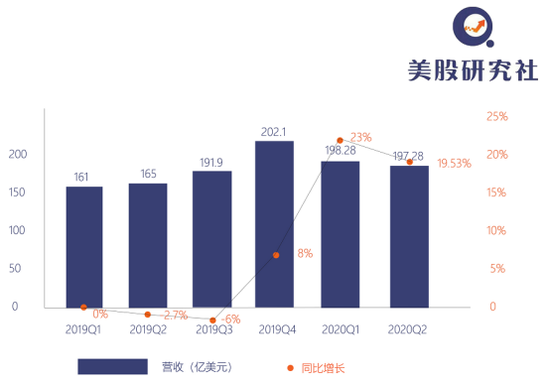 Specific to the performance of each department:

-The revenue of data center group was 7.1 billion US dollars, up 43% year on year;

-The revenue of the Internet of things group (DCG) was $670 million, a year-on-year decrease of 32%;

-The revenue of Mobileye, the autonomous driving technology division, was $146 million, down 27% year-on-year;

-The revenue of storage business group (NSG) was 1.7 billion US dollars, up 76% year on year;

From the core data performance point of view, Intel's financial performance is good, also continued the growth trend of the last quarter. With the gradual recovery of semiconductor market and the rebound of PC market demand under the epidemic situation, Intel is still likely to benefit from this.

However, Intel's current situation can be said to be besieged on all sides, in the CPU field to face the strong rise of AMD, in the GPU field to face the constant provocation of NVIDIA. You should know that at the beginning of this month, NVIDIA once surpassed Intel in market value, becoming the most valuable chip company; and AMD's share price also surpassed Intel in a historic way on July 23, Beijing time.

It can only be said that although Intel's second quarter earnings performance exceeded expectations, the current situation is not optimistic. This may also be one of the important reasons why Intel is not welcomed by the capital market for its better than expected results. So, next, can Intel break the capital market bias? Through Intel's latest financial report, we may be able to interpret from the following aspects.

In the second quarter, the PC centric customer computing Department grew by 7% to $9.5 billion. Although this is a digit growth rate, it is relatively rare for Intel.

In recent years, the growth of Intel's PC business has been tepid. It is rare to see a 13.8% year-on-year growth in Q1 this year. In most cases, the growth of this business is hovering in single digits, and the growth rate of Q4 business in 2019 is only about 2%. Q2 can continue the growth trend of the last quarter and maintain a high single digit growth, which is also very rare.

In other words, Intel's PC business has been able to achieve a high growth rate for two consecutive quarters, which is inseparable from the short-term dividend generated by the epidemic. However, there is a market view that PC (especially notebook) has overdrawn the demand of the whole year in the first half of the year, and it will be difficult to maintain a high growth rate in the second half of the year. With the gradual improvement of the epidemic situation, this demand may also decline, leading to Intel losing the corresponding market share.

At the same time, on the competitive side of PC business, Intel's strong competitors in CPU are full of firepower. From the perspective of online sales in China and Europe, the sales of AMD CPUs are increasing. In particular, because of the high cost performance of ryzen 4000 series low-level computer CPU, Intel is forced to reduce its price in a large area, and the price war between the two sides is fierce. However, it is almost certain that the notebook computer drives the AMD performance to break out.

Intel's seven nm are still there

According to the data released by the semiconductor industry association, the global sales of semiconductor products in May were US $35 billion, up 5.8% from US $33 billion in the same period of last year; the previous month was US $34.4 billion, up 1.5% month on month. 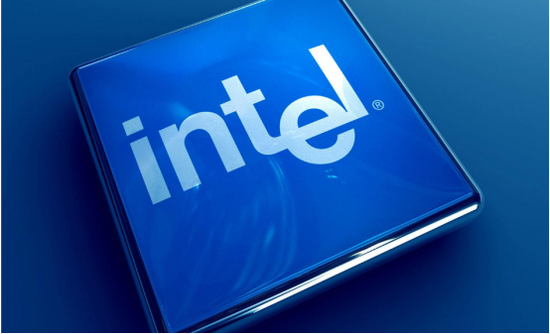 With the good development prospect of semiconductor, the competition of the whole industry is continuously intensifying.

In recent years, both in chip design and manufacturing, Intel has shown a backward trend, in the technical progress has been criticized by the outside world

Facing the fierce competition in the market, Intel, as the old king in the chip field, is certainly not waiting to die.

Moreover, in the financial report of the second quarter, Intel confirmed to investors that the 7Nm process, which was originally scheduled to be listed at the end of 2021, had encountered some problems, so it needed to postpone the listing time by more than half a year, and the mass production date was also postponed by nearly one year. Therefore, it is expected that the first 7Nm product will not be available until the second half of 2022 or early 2023. In fact, AMD's ryzen 4000 chip based on 7Nm architecture has been on the market for several months, far ahead of Intel.

The production delay of 7Nm process chips is an urgent problem for Intel. If we refer to the history of Intel's continuous improvement of 14 nm process and the hope of the current 10 nm process, the company may release more 10 nm chips in the next few years. According to Intel's current expectations, 7-nanometer chips may encounter similar bottlenecks in the PC field in the next few years.

This makes the market full of worries and dissatisfaction with Intel's toothpaste squeezing development. After the financial report was announced, investors stormed 10% after hours.

But competitor AMD's after hours share price actually rose by more than 8%, also realized to surpass the Intel stock price on the 23rd of this month. According to the latest stock price after the current session, amd reported 64.32 US dollars, Intel 54 dollars, the difference has been 10 dollars. 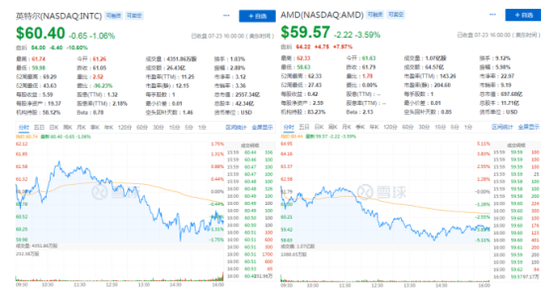 According to the analysis of industry insiders, amd ranks first in the S & P 500 index in recent three years. Its share price has risen from less than $2 to more than $60 now, up more than 30 times, far exceeding the market. At the same time, AMD's sharp dragon architecture has long-term advantages in performance, and has great potential in the high-end consumer processor market and server market. Although, there is a big gap in the market value between AMD and Intel, it is difficult to resist the momentum of AMD seizing market share.

Reflected in the financial report, this may prompt Intel to increase its R & D investment, and the continuous follow-up of R & D investment will be a high probability event. Although Intel's spending on R & D and sales in the second quarter fell 5% to $4.8 billion from $5.1 billion in the same period of last year, this may be only an accident. With the follow-up pursuit of advanced technology, Intel may need to face the problem of how to balance the technological catch-up and revenue. After all, its earnings per share in the third quarter were lower than expected, and it seems to have such signs.

According to the financial report, Intel's data center business revenue reached 7.1 billion US dollars in the second quarter, achieving a high growth of 43% over the same period last year, further narrowing the distance with PC business, which accounted for 36% of Intel's total revenue. For Intel at this stage, the data center business is also expected.

On the one hand, the epidemic has accelerated the transfer of enterprises to the use of cloud computing services, and the workflow is becoming increasingly digital, giving rise to a strong demand for server chips. And Intel is still the market leader in this field. The data shows that the annual sales of Intel's data center business still exceed 20 billion US dollars. Even if the epidemic returns to normal and the office reopens, business investment in cloud technology and infrastructure will only accelerate.

Because there is also a broader demand driver for 5g. It is an irresistible trend for 5g to be promoted globally, which will greatly improve the edge computing capability. For example, when a new type of Internet of things devices and automatic driving technology appear, the market will increase the demand for 5g chips. As the current industry leader, Intel is bound to have a profit opportunity. Currently, Ford is working with Intel, and Intel's Mobileye vision sensing technology will be used in its driving assistance system. Although there is still a long way to go before the full landing, it is only a matter of time.

However, it is worth noting that although Intel has achieved significant growth in its data center business, the formation of this high growth is actually due to the fact that it suffered from the impact of the capacity crisis last year, resulting in a smaller base. More importantly, with the rapid development of its data center business, NVIDIA is engaged in a tug of war with Intel.

At the same time, analysts value NVIDIA's data center business growth in the next few years to be higher than Intel's. Wall Street expects NVIDIA's data center revenue to begin to exceed its gaming business sales in the second quarter ending July. Data center sales are expected to be $6.5 billion for the year, while video game chip sales are expected to be $6.1 billion. It can be seen that the market is optimistic about its development prospects in the data center business. 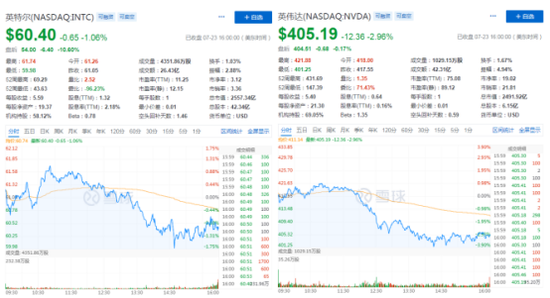 Well, while NVIDIA continues to increase its data center business, it is very likely to challenge Intel's hegemony again. At present, the gap between NVIDIA's $249.192 billion market value and Intel's $255.734 billion is not big. Next, the battle between the two in the field of chip will still be a protracted war.

However, there is no lack of institutional voice. For example, not long ago, Goldman Sachs downgraded Intel to sell; Morgan Stanley lowered Intel's rating to "wait-and-see". In addition, in the short term, there is another point that can not be ignored, that is, the uncertainty brought about by Sino US trade friction, which may be an important factor for the market to consider.

Of course, in the long run, if Intel wants to stand at a high point in its stock price, it may need to achieve a greater breakthrough in its own technology and technology, which is the key to tamping a chip enterprise.