With CPU and GPU, why do we need special AI chips?

An integrated circuit system designed for a particular purpose. For example, the Bitcoin mining boom was born specifically fo

ASIC is just like a professional. It has a certain specialty. CPU and GPU are more like generalists, capable of many things, and have their own areas of expertise, but they can't be compared with those of ASIC. 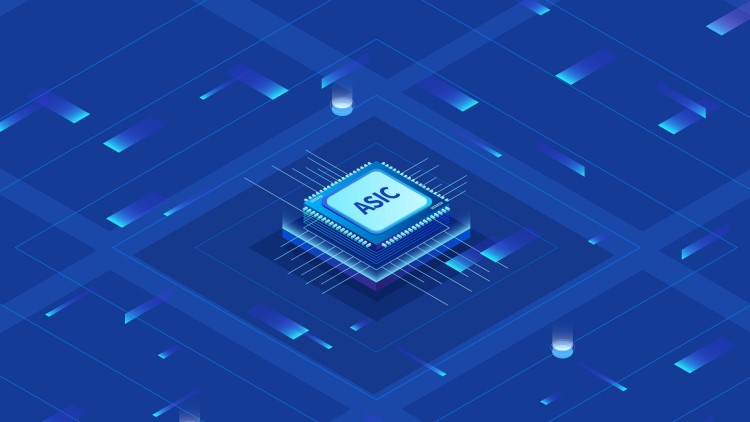 Specific to AI computing, ASIC is superior to AI algorithm in running speed, while power consumption (power consumption) is low. However, due to the limitation of the original design idea, CPU is extremely slow in AI computing. To speed up the speed, we can only stack more CPUs.

CPU speed is not good, there are many companies using GPU to accelerate AI computing, found that the calculation is also very fast. But after all, GPU is not designed specifically for AI. The speed is not to the limit, and there is room for improvement. Moreover, its price is not cheap and its power consumption is high.

In the final analysis, CPU and GPU are not designed for AI computing. They also have other tasks, so they have a lot of other capabilities, which are not useful for AI algorithms. All walks of life are gradually using AI algorithm, and must find a fast, low power consumption and inexpensive computing power solution, ASIC is one of the mainstream choices.

How does the AI chip land?

AI chips always have a landing carrier, that is to say, it has to be used somewhere in order to produce value. At present, there are no more than three mainstream landing carriers: terminal, cloud (i.e. data center) and edge end.

Terminals are devices that ordinary consumers can use directly, such as mobile phones and smart watches. The cloud is usually referred to as the data center. The computing is processed in the data center and then transmitted to the terminal equipment through the network.

The edge end is between the cloud and the terminal. To understand it simply, it completes the calculation on the tens of thousands of nerve terminal nodes near the data source side, without transmitting to a unified processing center for centralized processing. Therefore, it can shorten the delay time. On the one hand, edge computing can make up for the shortage of terminal equipment, on the other hand, it can also alleviate the potential problems of data security, privacy protection, bandwidth and delay brought by cloud computing.

In the terminal, AI chips exist in the way of integration. In order to improve performance, reduce power consumption, and save cost, terminal AI chips usually allow customers to integrate them into the SOC (system on chip) of terminal devices through IP (intellectual property rights) authorization.

In 2017, Cambrian 1A was integrated into Qilin 970 through IP authorization. Then, the Cambrian 1H was carried on Qilin 980.

In May 2018, Siyuan 100 was released in the Cambrian, which officially entered the cloud AI chip field. In 2019, Siyuan 270 was launched. The next product in the series, Siyuan 290, is in the internal sample testing stage. It is worth mentioning that according to Cambrian, this product is designed based on the 7Nm manufacturing process. Manufacturing process is the core competitiveness of chip manufacturing. The smaller the number, the higher the performance and the lower the power consumption. At present, there are few companies in the world capable of designing 7Nm process.

After the Cambrian listed on the science and technology innovation board, the biggest controversy lies in the uncertainty of its main business and the fierce market competition.

First look at the terminal market. In Cambrian, the entry point of terminal AI chip was mainly embedded into the SOC chip of Huawei mobile phone through IP authorization. According to the Cambrian prospectus, in 2017 and 2018, the revenue from IP licensing business of terminal intelligent processor accounted for more than 98% of the main business income.

In 2019, it plummeted to less than 16%. Behind this obvious change is that Huawei chooses to let its semiconductor company Hisilicon develop its own AI chips, while the order size of other Cambrian customers is far less than that of Huawei.

It is also very difficult to expand new customers. According to counterpoint statistics, the global smartphone market in Q1 will rank from high to low in 2020, namely Samsung, Huawei, apple, Xiaomi, oppo and vivo. Among these mobile phone manufacturers, Samsung, apple and Huawei choose to develop their own AI chips, while Xiaomi, oppo and vivo directly adopt AI chips from Qualcomm, MediaTek or arm.

Cambrian specially mentioned in the prospectus: most of the products of domestic famous smart phone manufacturers adopt mature mobile phone chip products and solutions at this stage, and have not yet commercialized SOC chips independently developed by them on a large scale. These manufacturers do not need to purchase large-scale IP products of the company in the short term.

In the field of terminal, cloud AI chip is the main revenue pillar of Cambrian. Cloud AI chips are a market around which giants surround themselves. Qualcomm, Alibaba, Huawei and Google have all released products, but NVIDIA's GPU has the absolute advantage.

Although GPU is not the most suitable chip for AI computing, due to the time required for AI chip research and development, it is still in the market development stage. Therefore, the mainstream AI training (neural network learning process) and reasoning (putting neural network into use) chips are still GPU.

A comparison of the Cambrian products listed in the prospectus. It can be seen that, like the latest Cambrian Siyuan 290, both NVIDIA A100 and Huawei Hisense ascend 910 have used the 7Nm process. Moreover, the peak performance of NVIDIA A100 is higher than that of Cambrian and the latest products of Huawei Hisilicon, which will affect the acquisition of customers by Siyuan 290 to a certain extent. 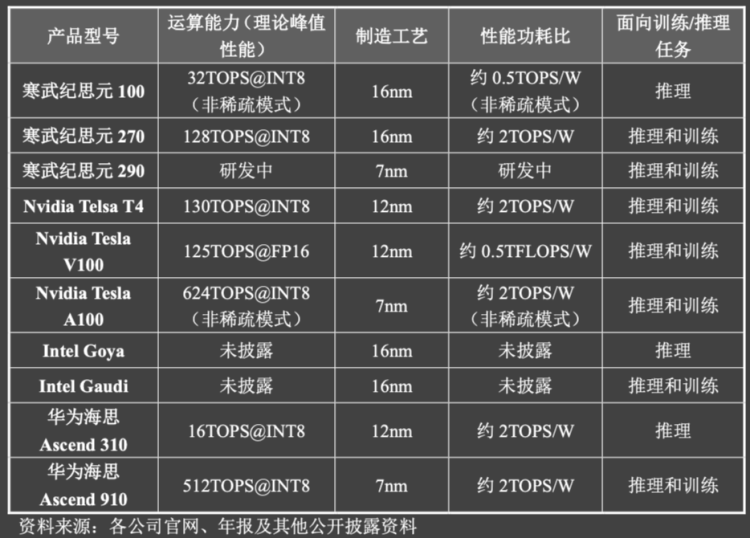 In terms of edge AI chips, Cambrian listed in the prospectus a comparison with similar products. It can be seen that the performance and power consumption of Cambrian Siyuan 220 are not much different from NVIDIA Xavier, Huawei Hisense 3559a and ascend 310. Even the manufacturing process of NVIDIA's and Huawei's products is 12NM, ahead of the Cambrian Siyuan 220.

Edge computing is regarded as the next battlefield. Almost all manufacturers with accumulation in the cloud and terminal will launch corresponding edge AI chips. In terms of giants, in addition to NVIDIA and Huawei, there are also Google and Qualcomm. In the field of edge chips for autonomous driving, such as Intel and horizon, the competition in Cambrian is fierce.

Generally speaking, AI chip is a fast-growing market, whether it is cloud, edge or terminal, Cambrian is in a long enough

Related news
ARM released a new architecture CPU, GPU and AI core, Huawei will miss
Intel joins chips alliance and provides advanced interface bus
With CPU and GPU, why do we need special AI chips?
Times have changed! NVIDIA A100 GPU inference performance 237 times rolling CPU
Hot news this week
Kuaishou launched a self-developed cloud intelligent video processing chip: The chip has been streamed successfully
Ministry of Public Security: Single telecommunications network fraud continues to cause 40 % of all electrical fraud cases
Special price "kill ripe"? Bike-sharing platforms have different prices for the same package for different users
A tech company in Shanghai has been fined 220,000 yuan for swiping orders to improve its ranking on Yelp
Text message color, picture quality compression! Google calls out Apple for improving cross-device messaging
Alibaba: Shareholders SoftBank will settle in advance for advanced payment in advance involving a maximum of about 242 million ADR
It is also the collapse of the mine card: NVIDIA graphics card plummeted, AMD graphics card increases against the trend
Gaming phones also have optical shake protection: a 50-megapixel large-background master camera on the Rescuer Y70
Musk's eyes! Lei Jun released a full -size humanoid robot Xiaomi self -developed strength explosion table
Biden signed a chip and scientific bill, a video call of WeChat iOS internal test suspension window, the advanced CPU caused Win11 to be difficult to use, Huawei new machines enter...
The most popular news this week
Economic Daily: US Chip Act will not stop China Chip!
Because of violating consumer law, Google was fined about 288 million yuan
Global e-commerce revenues may shrink for the first time
Apple's M2 processor is coming down: The iPad Pro 2022 is scheduled to ship in October
Are the suitcases hot? Meteorologist alert, the climate crisis is here!
Has been taken 4 pins, the new crown vaccine, the American Pfizer CEO is positive: taking special effects medicine
A fire broke out in Nintendo Japan headquarters, and the news said that it was caused by the charging electronic device
YouTube has been revealed as early as this fall to launch an online store to support streaming platform subscriptions
Video game company Unity rejected AppLovin's $17.5 billion takeover offer
Huawei Mate 50 series first emergency mode: can make phone calls and scan when the battery is exhausted