Huawei withdraws from advanced technology amd package to step down, and the 7Nm capacity of syn 3 and rdna2 is stable

These days, TSMC has suddenly become a sweet potato, and Apple, AMD and even Intel have begun to increase TSMC OEM. This year, for AMD, is the year of upgrading Zen3 architecture CPU、RDNA2 architecture, with the revelations that it has packed seven nm/7nm of tsmc's 200,000 wafers, double the capacity of last year.

Last year, amd first launched the 7-nm process of the sharp dragon 3000 series processor, but the initial production capacity was tight. After all, at that time, TSMC's 7 nm customers were still apple and Huawei, and AMD's priority must be lower.

The year 2020 is different ,Huawei capacity ends in september, apple will shift to five nm of process capacity, seven nm and seven nm will be empty,Amd has the opportunity to expand orders, and the production capacity of 200000 wafers is reported to be twice that of last year, which is expected to greatly alleviate the capacity shortage of AMD's sharp dragon, Xiaolong and rdna2 architecture GPU.

Amd has stated its position many times before,Zen3 architecture will be launched this yearAccording to the information on hand, Zen3 Raptor CPU Code 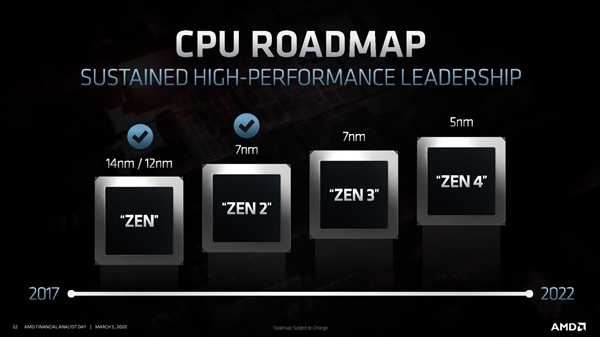 In addition,The memory latency of the zen3 processor will also be further improvedAccording to ASUS executives,The Zen 3 architecture will have similar or even better performance with the Reebok 4000g in memory, which is worth looking forward to.

As for rdna2 architecture, amd has previously said that its energy efficiency has been improved by 50% compared with the previous generation. This year, it is mainly used in big Navi Series graphics cards, with a total of 72 sets of Cu units,A total of 4608 stream processor units, with 384 bit width and 12 GB capacity gddr6 video memory, are 40% to 50% better than RTX 2080 ti.