The end of the PC era series: Sogou finally "married" Tencent after seven years of love 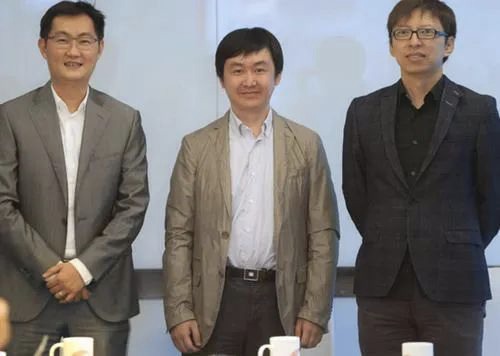 In September 2013, on a Tuesday afternoon without warning, Ma Huateng, Zhang Chaoyang and Wang Xiaochuan jointly appeared in the Sohu media building in Wudaokou, announcing that Tencent had injected $448 million into Sogou, and packaged Tencent's Sogou business and other related assets to Sogou, bringing to an end the Sogou trading case, the largest trading soap opera on the Internet in China that year.

Seven years later, Tencent and Sogou chose to be the real family 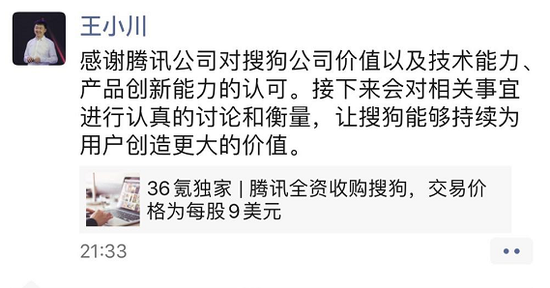 The story of Sogou and Tencent is a super long series from the PC era.

Before Tencent became a shareholder in Sogou in 2013, Zhou Hongyi and Zhang Chaoyang had already sat at the negotiation table. In order to strive for the opportunity of independent development, Wang Xiaochuan went to Shenzhen to meet with Tencent's senior management, opened the negotiation window of both sides, and finally turned the corner.

Seven years ago, the tide of mobile Internet has just risen, the influence has not been completely released, search as an important traffic entrance in the PC era, the status is still pivotal, become the goal of various Internet giants.

At that time, Tencent was investing heavily in search, but failed to make a big breakthrough for various reasons. And Sogou joint attack 360, through mergers and acquisitions to expand the scale, but also for Tencent's search business to find a new solution. This is a capital marriage with more than one stroke, leaving a lot of money in the history of China's Internet.

However, seven years later, the rise of mobile Internet has greatly weakened the entry function of search. Baidu, the largest search market in China, is in a bad situation. 360 and Sogou, which are in the second echelon of the industry, are not immune. The highlight time of search has passed, but Tencent and Sogou choose to go closer.

The shadow of valuation

Listing was once a thorn in the heart of Sogou CEO Wang Xiaochuan.

In November 2017 After landing on the New York Stock Exchange in May, Wang Xiaochuan took off his guard and was frank with the outside world: before Sogou went public, he had a lot of responsibility. In the company, at the beginning, employees would be very anxious when they left the company, and they felt that they were trusted to come. Sogou was disappointed and left. Later, he thought it was normal to leave, but the new anxiety was the people who continued to stay and continue to believe in themselves People can't let them down.

Since its listing, Sogou's share price has gone through a downward curve, which is related to the pricing standards encountered by Sogou in the US stock market.

Baidu landed on NASDAQ as early as 2005, and Sogou, a company whose model is very similar to Baidu, can not escape the value judgment dimension set by Baidu for Chinese search engine companies in American capital markets

However, in this pricing dimension, Sogou's performance is not satisfactory.

In an attempt to break the ceiling, Wang had given the expectation after Sogou launched its first report: 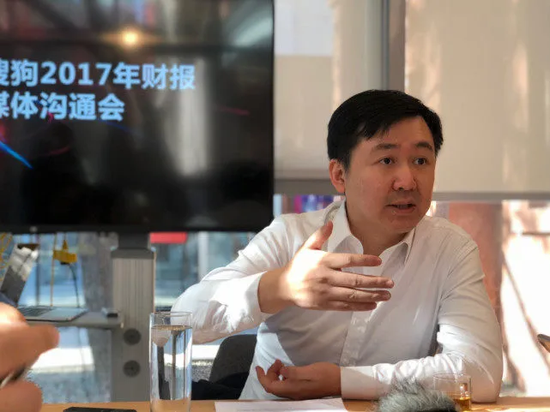 But as the search industry itself steps downhill, competition for traffic is more intense, with Sogou in the shadow of Baidu

And compared with Baidu's suppression, Sogou faced greater constraints in the industry situation

In order to solve the negative situation, Sogou has made many attempts in recent years.

In addition to seizing shares in the stock market, Sogou places higher growth expectations on its own traffic. In Sogou's story framework, the growth of its own traffic is closely related to its AI strategy.

This means that Sogou has changed from the original three-stage rocket mode of input method browser search to two service forms of dialogue and question and answer based on search and input method.

In September 2018, Sogou entered the content ecology field and officially launched a content open platform. According to the introduction at that time, Sogou has launched Sogou search app and Sogou browser app in terms of traffic entrance In terms of pushing content for end users, Sogou will push the information on Sogou to the target users by using algorithm recommendation based on Sogou big data and artificial intelligence technology. In terms of platform, Sogou will create multiple services for content creators, including content publishing, content management, data statistics, account revenue, etc.

However, the attempt did not go well.

In the existing traffic accidents, Sogou also places its breakthrough on the artificial intelligence business, and its direction is intelligent hardware.

Since then, Sogou has successively released household intelligent robots, recorders, translators and other hardware products, but the investment in hardware has not been able to translate into actual revenue. According to Sogou's financial reports over the years, search related advertising revenue is still its most important source of revenue. In 2019, Sogou's other business income was only $99.1 million, even slightly lower than that in 2018. 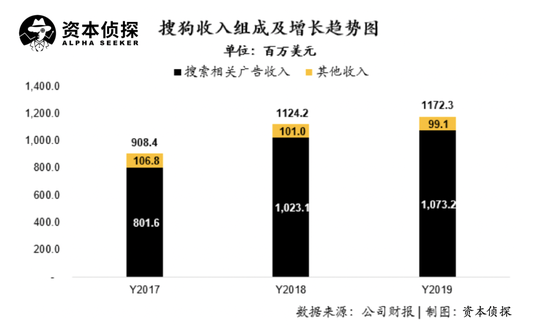 Just as the search for established players fell into a growth bottleneck, today's headlines, native to the mobile Internet era, were also online, hoping to search for the user's strong demand product through layout and tear through the existing ceiling. This is even worse news for Sogou

Under the attack of multiple factors, Sogou, which once had the power to stir up the industry pattern, has rapidly declined. Fortunately, it still holds the good card of Tencent.

The three parties take what they need

In 2013, Sogou stepped on the transformation node of Tencent as an open platform, and obtained Tencent's search business and other related assets as well as Tencent's $448 million capital injection.

The image of Tencent is not only

In this transaction, Sohu got financial support and retained control of Sogou; Sogou got traffic support from Tencent, which enhanced competitiveness and maintained the possibility of independent development; while Tencent obtained Sogou's search technology, improved the search experience in the system, and successfully stripped off the search business which invested a lot but was difficult to improve.

Seven years later, the relationship between Tencent and Sogou has gone further. In this transaction, the positions and demands of the three parties have changed. The only thing that remains unchanged is that it is still a win-win situation for all parties to the transaction.

In recent years, Sohu has fallen into the situation of saturated products and stagnant income. In his public speech, Zhang Chaoyang is still passionate about leading Sohu back to the central stage of China's Internet. In order to explore and layout new business, Sohu needs more financial support.

Although Sogou's income accounts for more than half of Sohu's total income, Sogou's performance is poor. The offer issued by Tencent is a premium purchase. Sogou's announcement points out that Zhang Chaoyang used all his voting rights to support the transaction and sold all his shares to Tencent. It can be seen that Sohu is very welcome to sell Sogou.

For Sogou, after the business development has fallen into a bottleneck, the traffic and products from Tencent can bring more support for it.

At the same time, once Tencent's acquisition is successful, Sogou will delist from the U.S. stock market. In the context of major changes in the global capital market, it is not bad for Sogou to leave the U.S. stock market. Moreover, without the pressure of the capital market on profits and growth, Sogou may be able to focus more strategically and focus more on the polishing of products and technologies, which is beneficial for Sogou Long term development.

For Tencent, in the to C product and business side, it also needs better search technology to improve the matching degree of information and connection efficiency. For example, for wechat with more complicated information and relationship chain, providing better search service has become a necessity. On the outside, Tencent also needs to be defensive in the face of the layout of today's headline online search.

In the course of Sogou's development, born out of Sohu, Sogou has been in the awkward situation of looking for a backer to fight against external competition in the early stage: in August 2010, in order to counter the acquisition plan of 360, Wang Xiaochuan went to Hangzhou to introduce Alibaba strategic investment. After officially breaking up with aribaba, in 2013, it was still in order to fight against 360 Wang Xiaochuan went to Shenzhen to pry Tencent, rewriting the direction of the story.

Because of this, Sogou's image always has a trace of juvenile heroism of bearing pressure, holding one breath, and singling out Baidu and 360.

However, due to various factors, the legend created by Sogou has not continued to be brilliant today. Today, Tencent's decision to purchase a wholly-owned company has also written a happy ending for Sogou. It is just the legend of Wang Xiaochuan, the goalkeeper of Tsinghua University's east gate.

Related news
Game developer: AMD sharp dragon makes ps5 and Xbox series X more PC like
The end of the PC era series: Sogou finally "married" Tencent after seven years of love
I NEED MY EX BACK WITH THE HELP OF A SPELL CASTER 2021
I NEED MY EX BACK WITH THE HELP OF A REAL SPELL CASTER 2021
JD.com,Tencent Extend Strategic Partnership on AI
Tencent CSIG Creates Enterprise & Government Business Line
Hot news this week
Apple is recruiting neurorendering research scientists to create immersive experiences for AR/VR products
Tesla China will take the initiative to significantly reduce production if it still fails to sell by 40,000 yuan
The Internet reported that the Shanghai factory would voluntarily cut production by 20%, Tesla responded
Hangzhou Internet Court: NFT digital collection belongs to the network virtual property, protected by law
Amazon has withdrawn a new offer from its retail division, cutting off new employees who were due to start early next year
You know what? Looking at your phone while driving is the equivalent of driving blind for about 50 meters, which is extremely dangerous
The United States has approved the first fecal transplant to treat disease by transplanting someone else's feces
Dalitsu, a lens supplier for Apple's iPhone 14, reported revenue of NT $5.231 billion in November, up 20 percent from a year earlier
Transsion Holdings: Established a global strategic partnership with Google to carry out in-depth cooperation in areas such as Android system
Do the most lightweight and smooth system! - MIUI 14 will come soon: The flagship will also be upgraded two years ago
The most popular news this week
Activision Blizzard CEO says Microsoft acquisition will go ahead, FTC allegations are factually incorrect
Experts: do not take ibuprofen if you eat Lianhua Qingdian, separate Chinese and Western medicines
Up to 56 cores! The new generation of Intel processors is coming.
Upgrade second regret! Serious problems after AirPods Pro 2 update
Apple got Sony's flagship sensor! iP15 is now more expected
Ibuprofen does not have to compete for the world's largest production capacity in China: one company is enough for 3.3 billion people.
QQ level first in the world! I responded to make netizens envious: the family opened the Internet cafe
Cook's "no" to Musk: cost Apple 4.4 trillion
AI paintings fetch a record price of 1.1 million! Baidu's AI painting was tested and the result was amazing
Burst! Tesla China discontinues Model Y production