For a long time, the category of pad is very embarrassed. The screen is much larger than that of mobile phone, but the portability and user experience are greatly reduced. If you want to use the large screen of pad to learn and work, it is found that its inherent function can not play a very important role in the actual learning and office scene.

At the beginning, we said Huawei matepad 10.8 has reversed the traditional tablet image of "just a larger screen phone" and enabled efficient learning and office scenes. How did it do it? In fact, this mainly depends on the two major functions of "intelligent split screen" and "parallel vision". 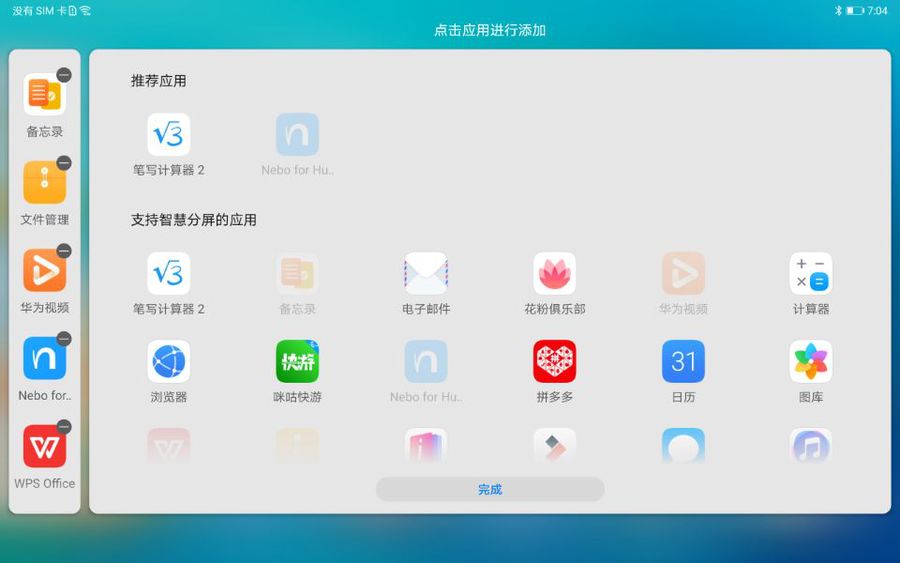 As the so-called "wisdom split screen ", in fact, HuaweiMatePad 10.8 support multi-window multi-task display function at the same time. To use the "smart split screen" function is also very simple, as long as the edge of the flat screen from outside and inside sliding and temporarily maintained, you can pull out the shortcut application startup bar, Drag and drop the application you want to split into the screen to complete double-screen display. 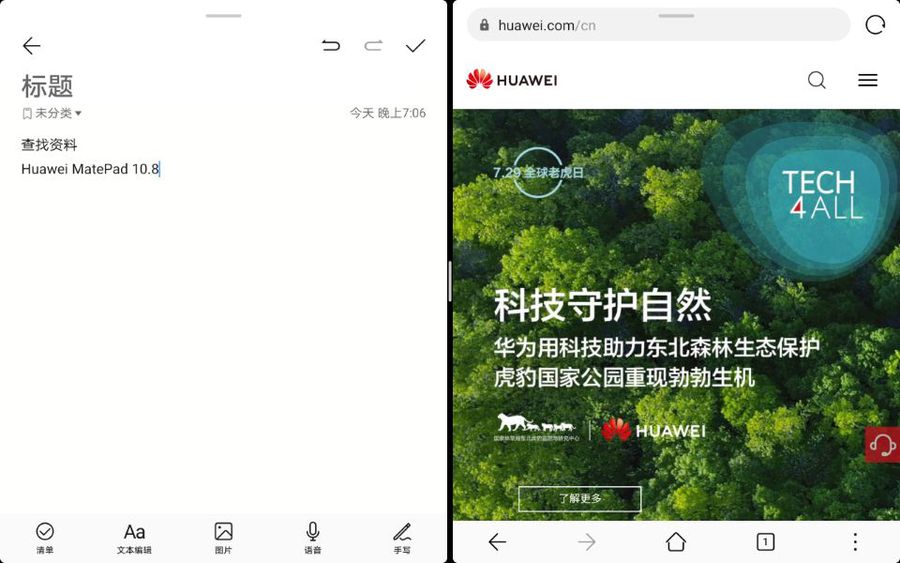 The "smart split screen" function has a lot of practical uses. For example, we can search for information and make records on the Internet as shown in the figure above. We can also chat with friends on wechat while pursuing drama. For students in online classes, we can use this function to take notes while listening to classes, which can improve learning efficiency. We will talk about this in detail later. 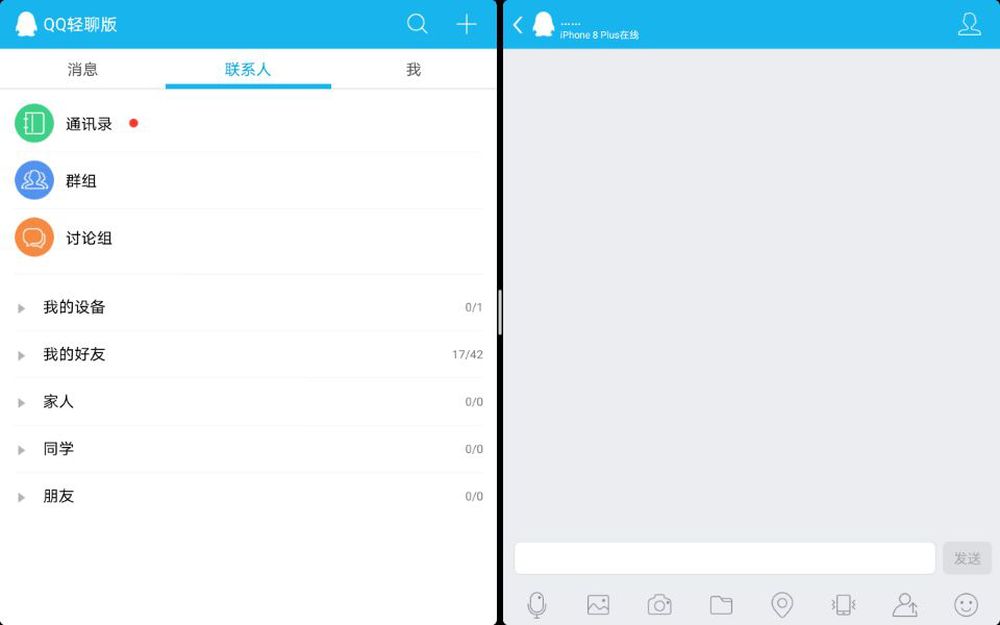 Next, let's talk about another function, parallel horizon. We know that the pad version of some apps on the traditional tablet is only enlarged on the mobile phone version. Both the interface and the operation are very awkward on the tablet. The "parallel view" is designed to solve this problem. For example, when we chat about QQ, we can display the friend list page and chat window interface in the same interface at the same time, which can bring us the real experience of using the tablet, rather than a simple enlarged version of the mobile phone.

A friend once thought that the efficiency of tablet can be improved by using keyboard and mouse. In fact, it is not all right. Considering the characteristics of the tablet, in addition to the keyboard for improving input efficiency, another indispensable tool to improve the operation efficiency is the stylus. Next, let's try the magic of Huawei m-pencil equipped with matepad 10.8. 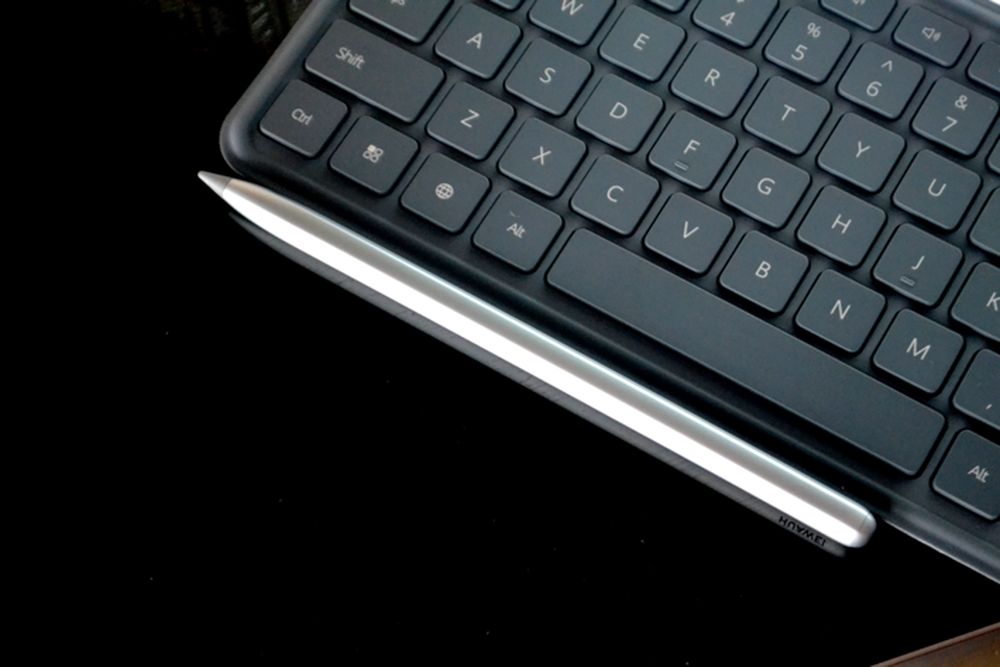 Huawei matepad 10.8 is equipped with Huawei m-pencil, which is different from our common stylus. From the modeling point of view, first of all, instead of the traditional cylindrical shape of the pen, it adopts an integrated six diamond design, just like a signature pen, which makes it more comfortable to hold. According to the official data, it also has the characteristics of 4096 active pressure sensing, lateral front writing, 20ms ultra-low delay, special composite material nib and so on. 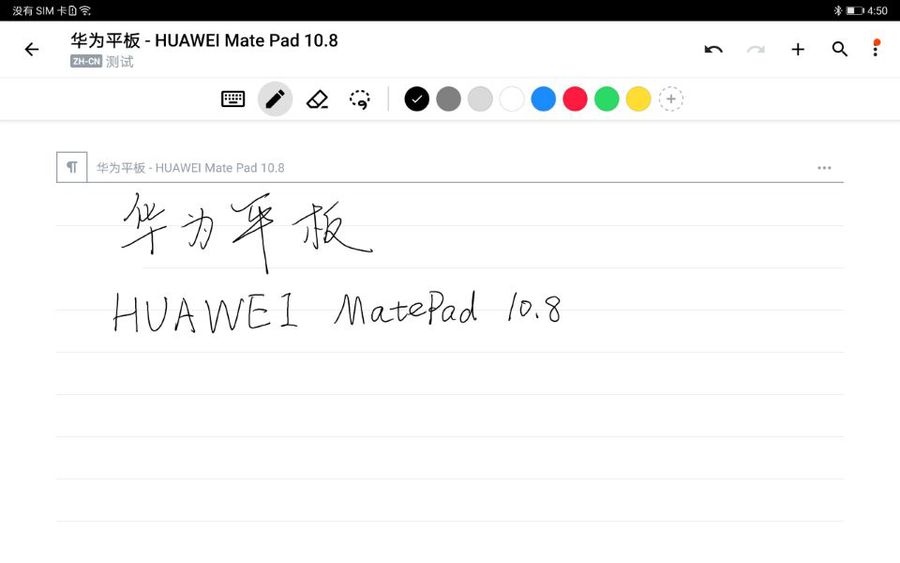 From the actual use, Huawei m-pencil can recognize Chinese, English, numbers and even mixed input system M-pencil is close to the handle of the real pen, which makes it very comfortable to write. The 4096 active pressure feeling ensures the accuracy of writing. Its low delay also makes this pen very handy. The composite material tip brings more damping. Compared with similar products, the writing feeling is more realistic, the screen is not slippery and the screen is more wear-resistant. In addition, Nebo also supports six kinds of gesture recognition, which can help users quickly complete operations such as erasing, segmenting, merging, and even drawing icons. 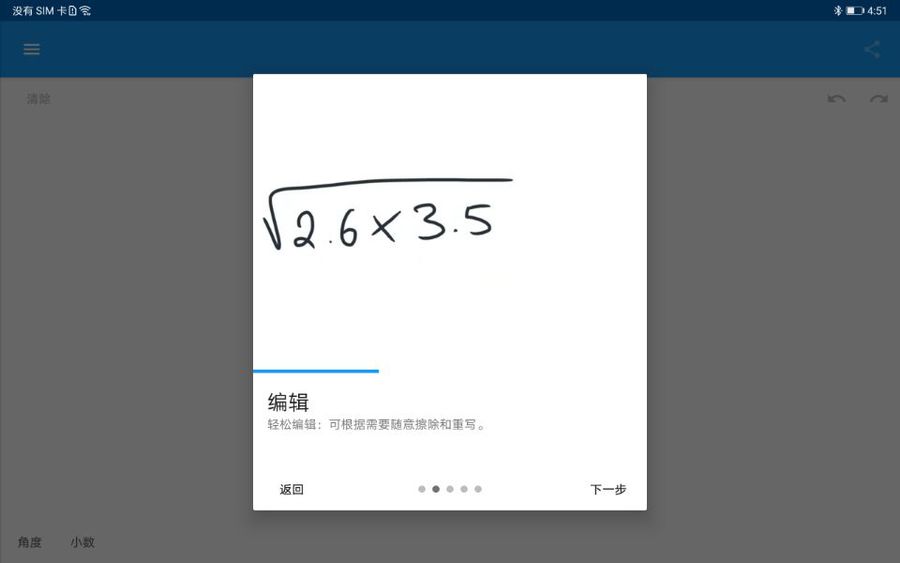 Huawei matepad 10.8 has customized a number of handwritten applications for Huawei m-pencil, covering note taking, painting design, office learning, utility tools, etc. For example, this built-in "pen writing calculator 2" is very practical. Users only need to write out the calculation formula by hand, and the system will automatically get the calculation results in real time. Combined with the characteristics of Huawei m-pencil, it can also change the calculation formula through arbitrary erasure, which is very convenient. 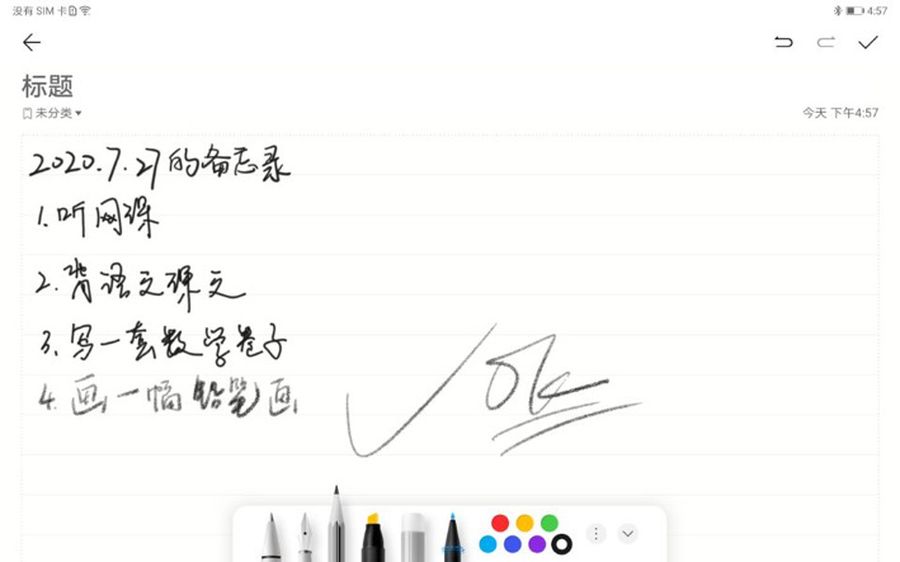 Using the memo provided by Huawei matepad 10.8 also supports handwritten operation, and supports the function of using Huawei m-pencil to write when the screen is on. That is to say, users can directly pick up Huawei when the screen is black When m-pencil writes on the screen, the system will automatically identify and open the memo, and then save it automatically after writing. This is extremely convenient for students who often take shorthand. It saves the complicated process of unlocking and opening the memo, and realizes "shorthand". 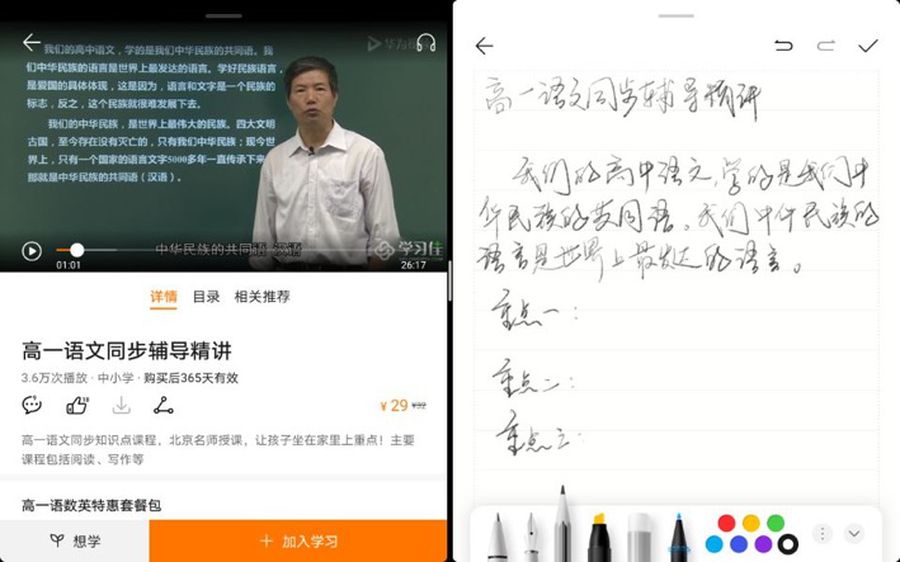 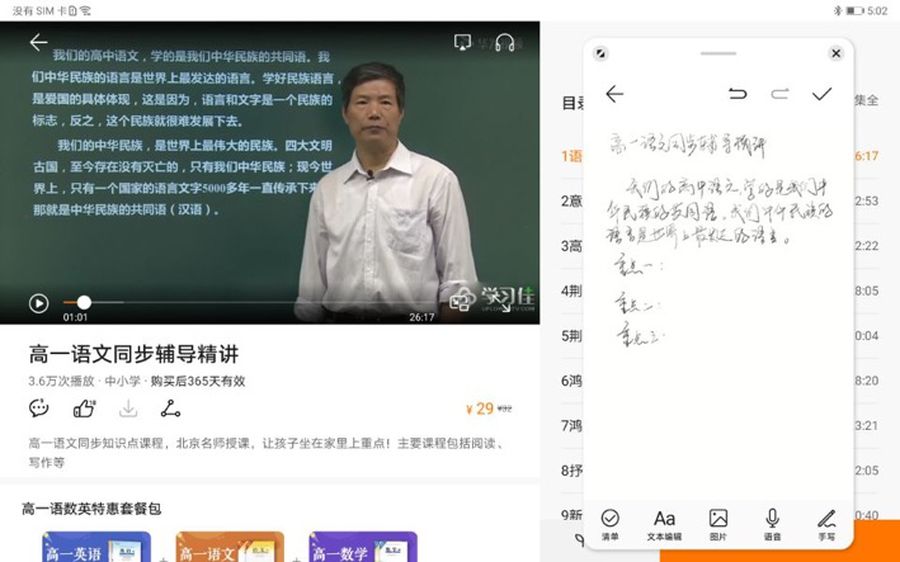 In addition to the left and right split screen mode mentioned above, Huawei matepad 10.8 also supports floating window. As shown in the figure above, the memo window is suspended above the Huawei video window, which can also be used for classroom notes recording, in conjunction with Huawei matepad 10.8 the large amplitude loudspeaker embedded in the slim fuselage not only gives you a real feeling of taking notes, but also gives you the same sense of reality as listening in class, just like a teacher giving a lecture in front of you. 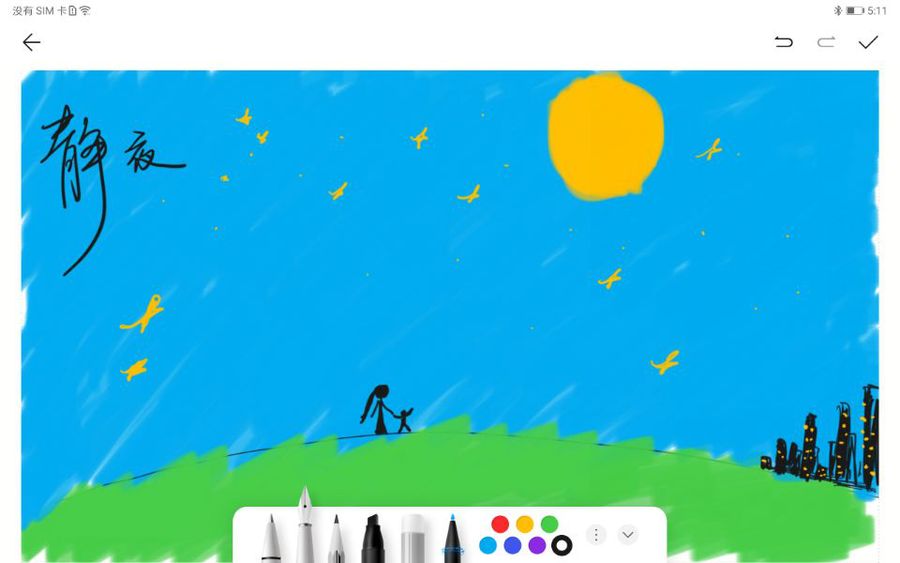 A practical pen like Huawei m-pencil is more meaningful to students who study art. They can not only write but also draw. Whether using Nebo or memos, you can quickly record inspiration, keep your own works, and even create illustrations in the built-in WPS. 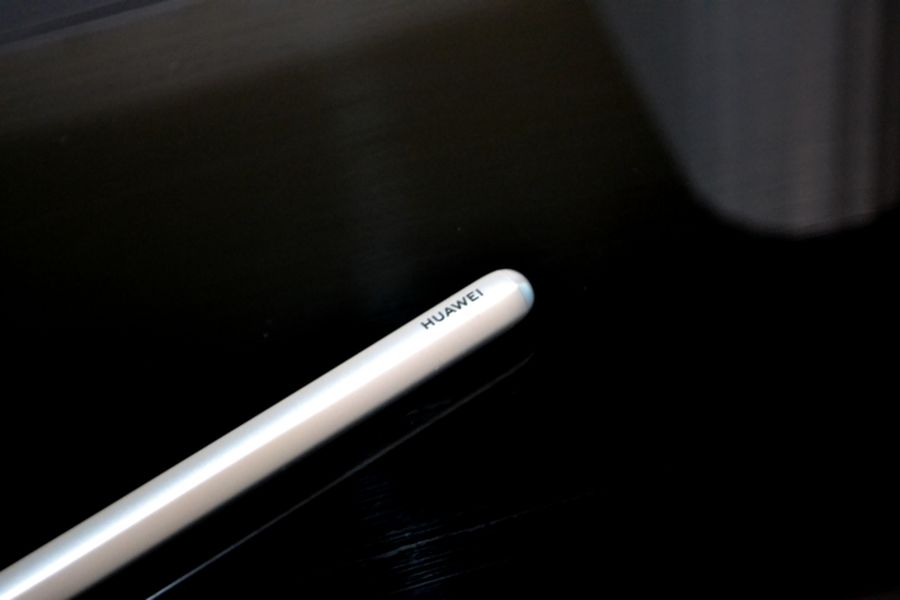 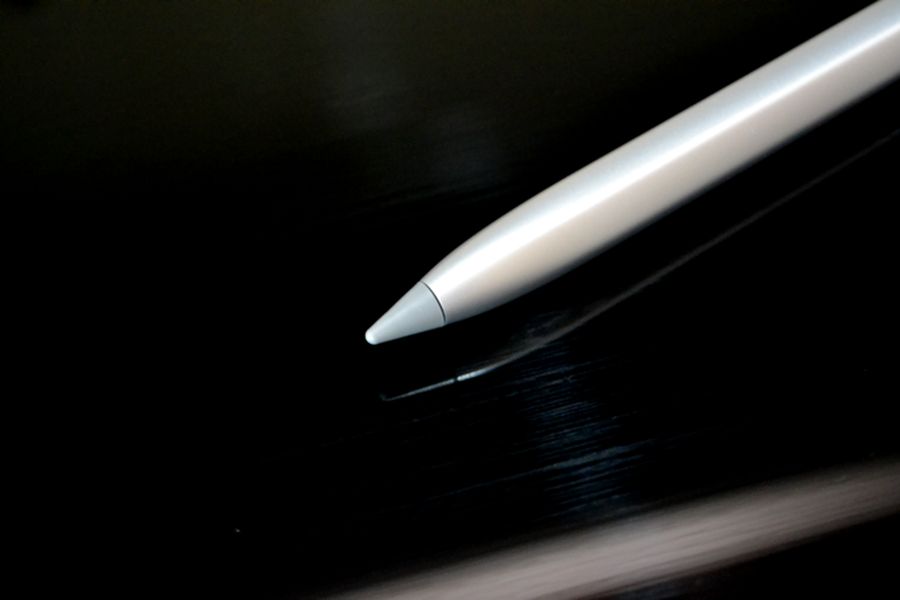 For matepad 10.8, Huawei m-pencil is easy to use not only because of the materials and design of Huawei m-pencil, but also because of its powerful handwriting software app and intelligent, stable and fast system. Through the standard magnetic suction charging line, Huawei m-pencil can realize the wireless charging of magnetic adsorption. The fast charging in 20 seconds can meet the writing demand of 10 minutes, and it can be fully charged in 30 minutes. Once fully charged, it can provide up to 10 hours of writing, with proper long endurance.

The exterior design of Huawei matepad 10.8 is fashionable and has texture. The appearance of champagne gold is low-key and luxurious, which caters to the appetite of young people. The 10.8-inch screen has a 2560 * 1600 resolution high-definition screen, a 16:10 aspect ratio, and 280ppi, making the screen not only bright and delicate, but also with Huawei's unique "sharp screen" display enhancement technology, the picture is very shocking when watching movies and games. 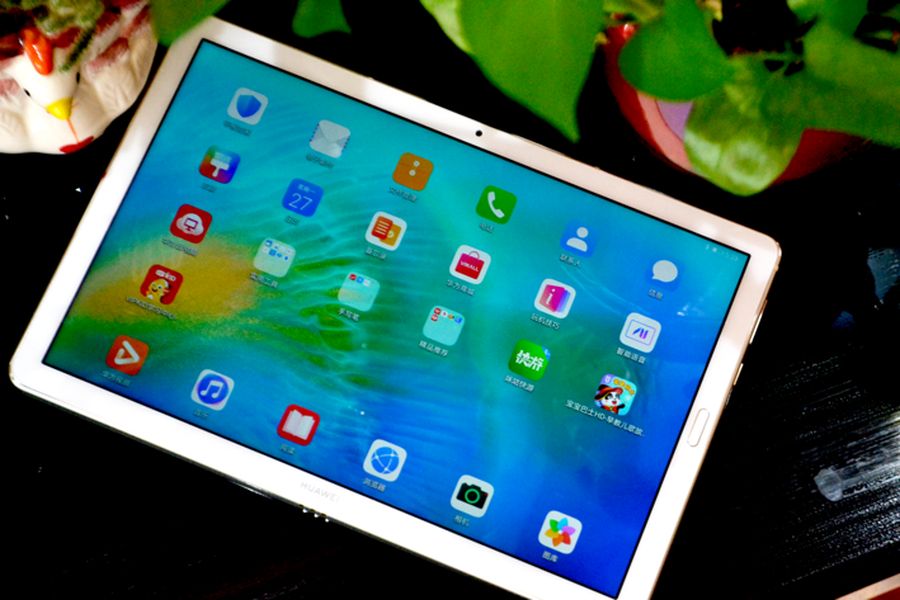 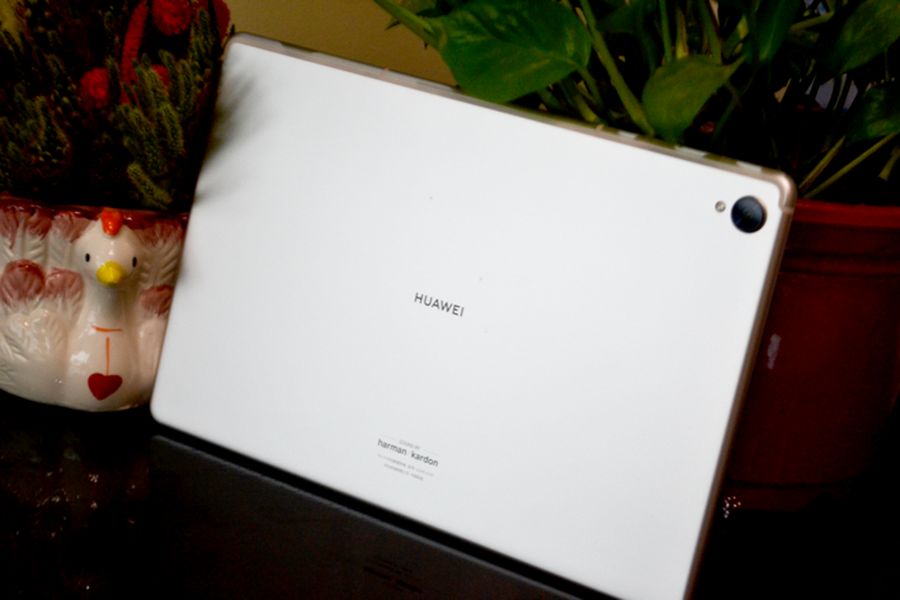 The 7.2mm fuselage is only 500g in thickness. It is not too thin and light to describe Huawei matepad 10.8. In such a slim fuselage, USB type-C interface, 3.5mm stereo headphone interface and pogo pin data interface are all available, and even a 7500mah super large capacity battery is inserted. In combination with Kirin 990 ultra-low energy consumption performance and emui power-saving technology, Huawei matepad can be used as a matepad 10.8 it provides 11 hours of HD video playback, 7 hours of game play and 10 hours of web browsing. It can be fully charged in 2.6 hours with 22.5w fast charging. 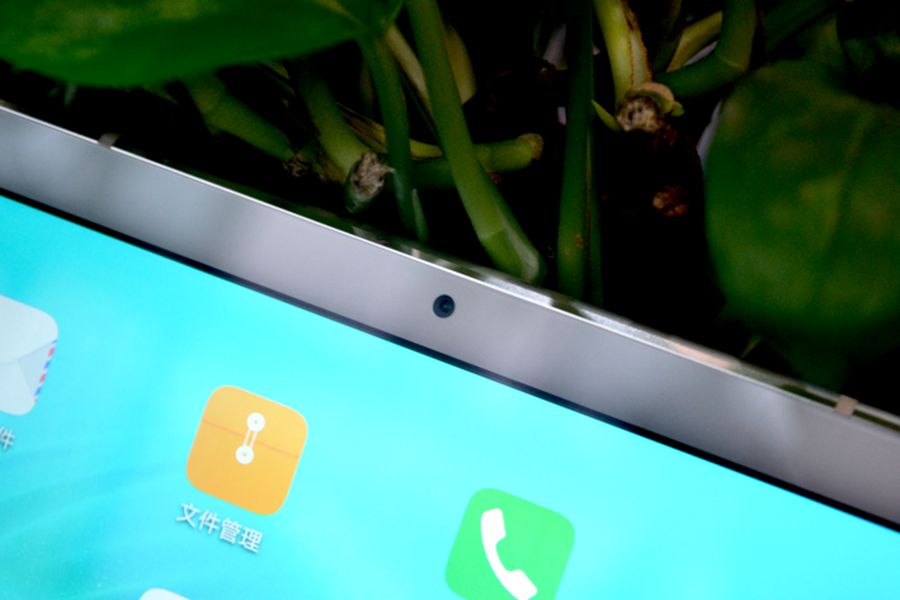 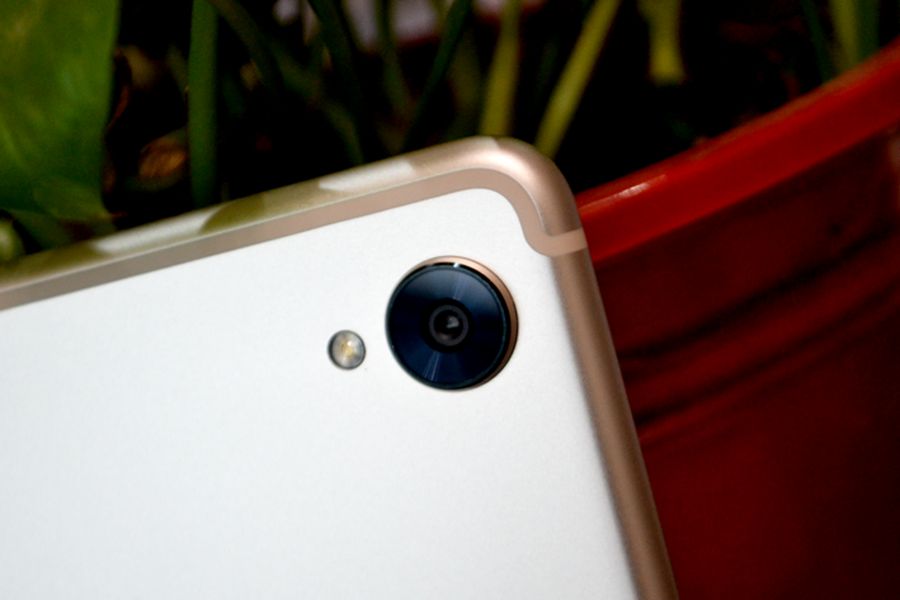 Huawei matepad 10.8 has an 800 pixel front camera and a 13 megapixel rear camera, which can meet the needs of video calls and simple shooting. 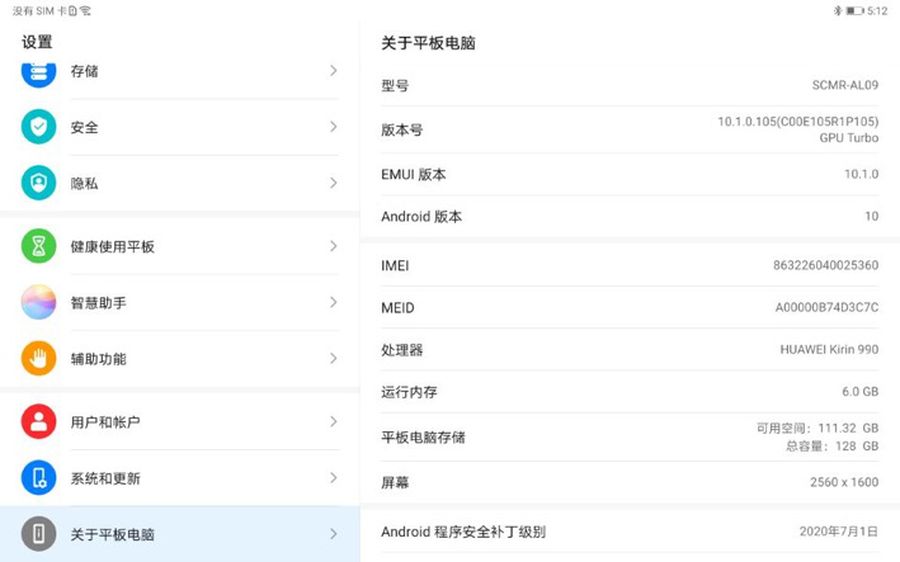 With such a powerful hardware core, both the speed and the fluency of the application can be guaranteed, and the frame rate of the picture in the game can also be maintained at a high level, which ensures that Huawei matepad 10.8 can easily cope with the basic application opening, application switching, web loading, multi task processing in heavy load scenarios and 3D large-scale games. 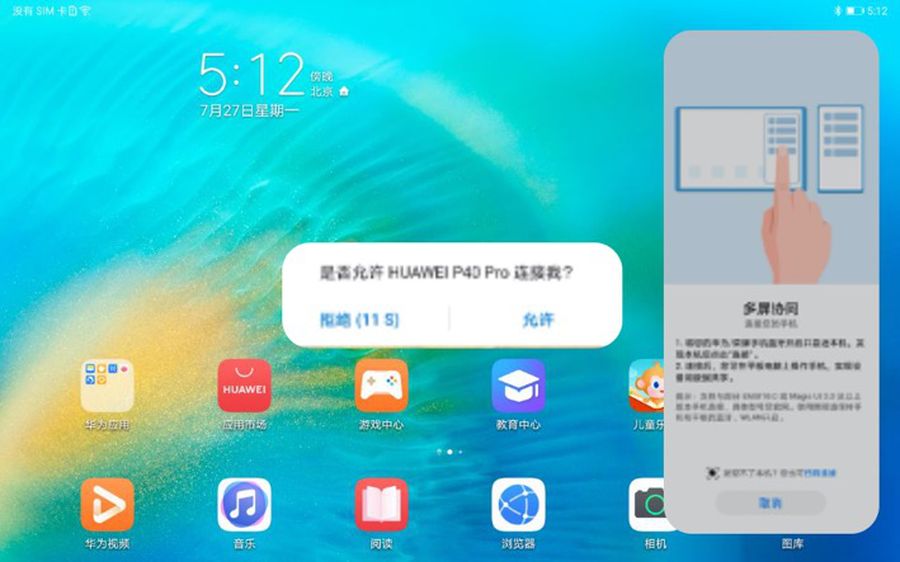 Huawei's different hardware devices can be interconnected through "multi screen collaboration". For example, Huawei mobile phones can be used to cooperate with Huawei matepad 10.8. After successful connection, data transmission and mutual peripheral devices can be realized. 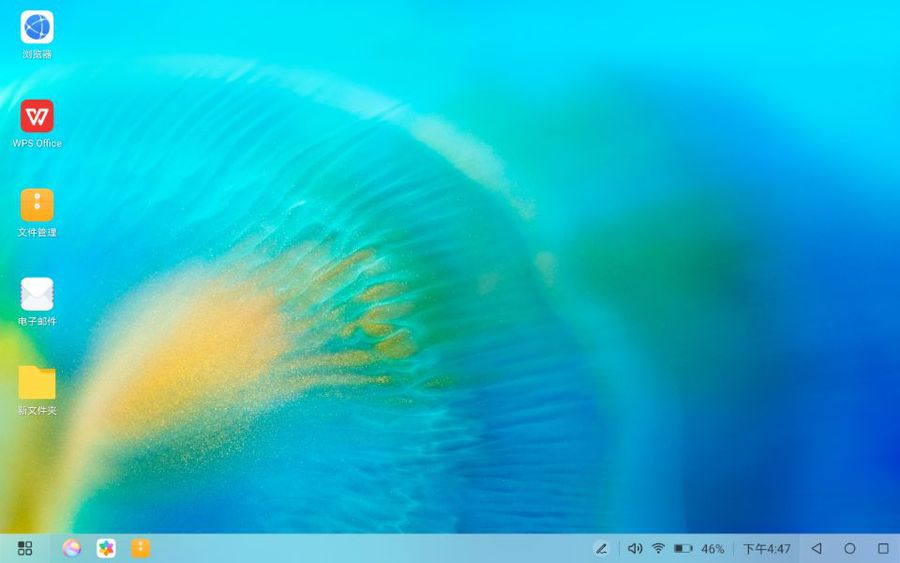 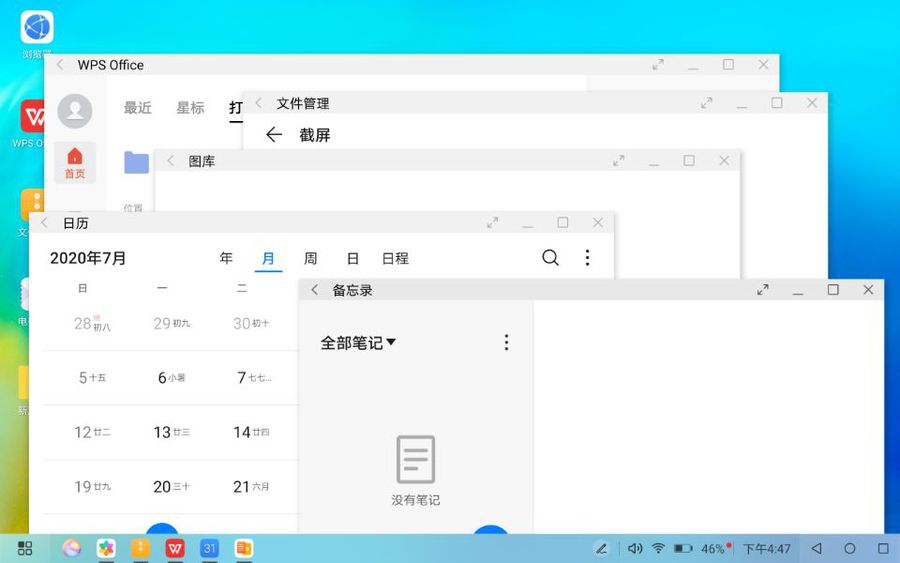 In addition to realizing the start menu and interface layout, Huawei matepad 10.8 also supports multiple window opening and window dragging operations, which is mainly due to its Kirin 990 flagship chip, which can provide AI intelligent computing power and improve system fluency. On Huawei matepad 10.8, multiple program windows can be opened at the same time. Each program window can be dragged and adjusted freely, and the window can be hidden in the taskbar and retrieved at any time. 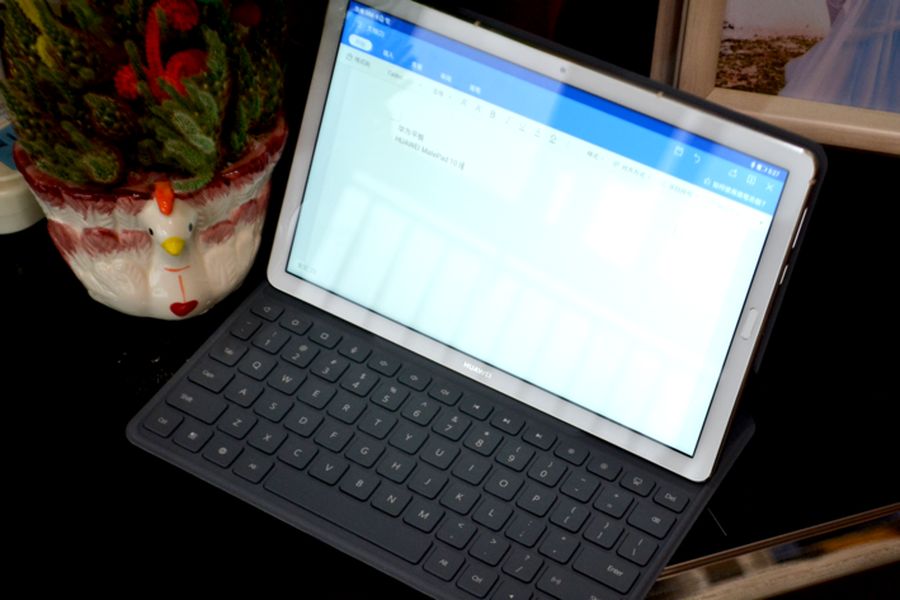 Whether it is "computer mode" or "intelligent split screen" and "parallel vision", with the original magnetic keyboard to input and edit the text content, as well as the production of Excel and PPT, can be very close to the computer operation experience, which can be said to greatly improve the use experience of learning and office and significantly improve the efficiency. The original magnetic keyboard is made of skin friendly material, small and portable. It is not only a keyboard but also a protective case, which can be used for many purposes. In terms of the touch feeling, the original magnetic keyboard has moderate key range, timely and powerful striking rebound, sensitive response, and the overall feel is very comfortable. It will not feel uncomfortable to write in time for 1-2 hours.

Summary:HUAWEI M-PencilIs the biggest bright spot, the combination of software and hardware improves learning efficiency, twice the result with half the effort 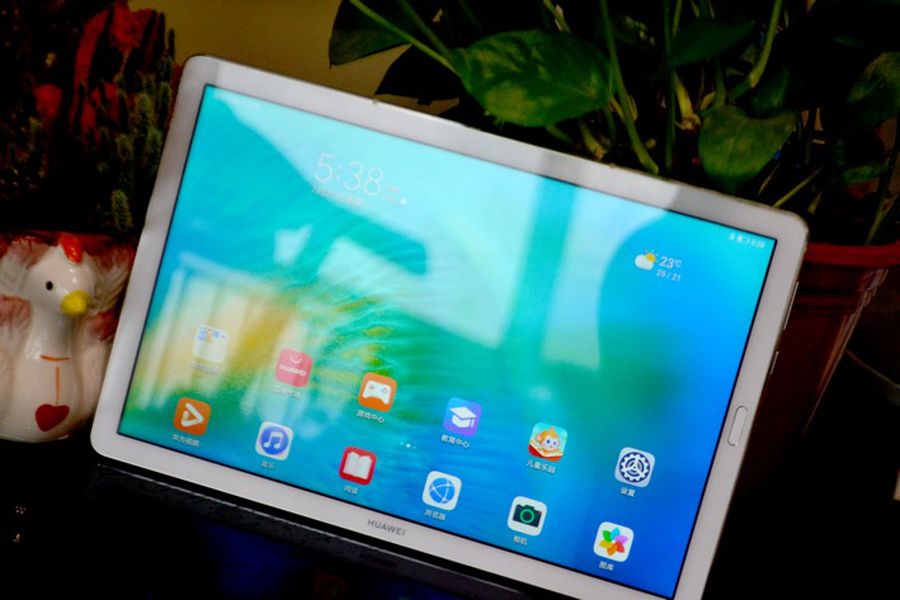