Before Android, iPhone and GoPro became well-known brands, flip video, which was popular around the world, was a good choice for many users to shoot home videos.It is not only convenient to hold with one hand, but also has the landmark reversible USB interface, so that users can easily save, share, or upload videos to Youtube and other platforms.Interestingly, according to Google's internal email shared by the House Judiciary Committee panel that initiated the antitrust hearing, flip video almost became the first piece of hardware to be labeled with the Google brand. In January 2006 (a year and a half before the launch of the first flip video), Google Video Product Manager Peter chane tried to persuade his colleagues to reach an agreement to make Google Video the main resource hosting partner for the upcoming pure digital camera.

In February, things got a little bit better because pure digital was clearly interested in branding upcoming products with Google in order to double or double the number of videos that can be uploaded. 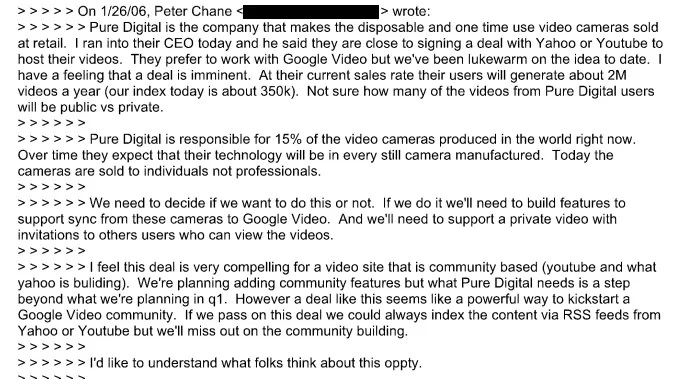 Interestingly, pure digital is also known as the "disposable camera manufacturer.". As early as 2005, the company has launched a $29.99 "disposable digital camera.". It's just that the user has to take it back to CVs and pay $12.99 to burn the video to DVD.

However, jejjifer keikin, Google's video director, thinks that they should buy YouTube more. Even though many colleagues, including Hunter walk, expressed different opinions in their e-mails: "we focus on videos with broad public interests, not hosting the personal video content of everyone.".

Google eventually bought YouTube in October 2006, but only a few months before that, pure digital had launched a camera with its own USB connector.

Then in 2007, the Company re launched the flip video camera, which is closely linked to Google's new YouTube.