Electronic cigarette giant Juul filed an application with FDA: it hopes to continue to sell in the United States

Juul labs Inc. announced on Thursday that it has submitted an application to the food and drug administration to continue selling e-cigarettes in the United States, which will determine the ultimate fate of the once brilliant enterprise.Juul said it was seeking sales approval for its products, as well as Virginia tobacco and peppermint pods with nicotine concentrations of 3% and 5% respectively. Juul stopped offering mango, mint and other flavors last year after regulatory scrutiny for suspected guiding minors to smoke. 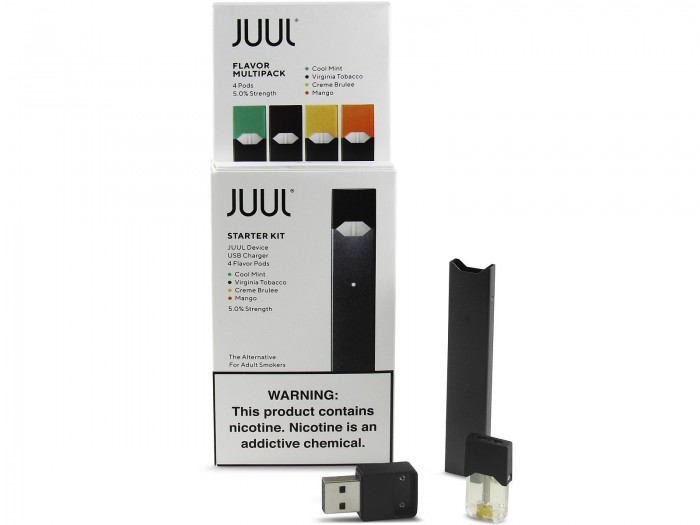 Juul's chief executive, K.C. crosswaite, said in a statement that the application is the key to Juul's efforts to get rid of the controversy and remain in the market as a traditional cigarette substitute.

Juul said the company had conducted more than 110 studies in its application, including studies on the impact of its products on public health and whether traditional smokers would overuse their products. Juul said its products could help one billion smokers worldwide quit smoking.

Today, the issue of minors smoking e-cigarettes is the key to regulatory review, not just for Juul, but for all companies planning to submit so-called pre market tobacco product applications. According to the annual survey on tobacco use among adolescents conducted by the U.S. Food and Drug Administration (FDA) and centers for Disease Control and Prevention (CDC), the number of children and adolescents using e-cigarettes has soared. In 2019, more than 5 million people reported using e-cigarette devices in the past 30 days.

The U.S. is Juul's largest market, and obtaining FDA authorization is critical to its business development. Juul said the company has never marketed its products to minors and has taken initiatives to limit the use of e-cigarettes by teenagers. Juul said its application addressed in detail the problem of minors using e-cigarettes.

"Juul laboratories has invested all the necessary resources to provide the best possible PMTA to address tobacco use among minors, based on rigorous scientific research and data-driven measures," Juul chief regulatory officer Joe Murillo said in a statement

FDA spokesman Alison hunt said in a statement that the FDA was aware of Juul's disclosure but could not comment on the details of the application. Hunt said that in general, the law requires the FDA to "take into account the risks and benefits of (a product) to the entire population, including users and non users of tobacco products, as well as adolescents."

Juul's wealth has shrunk as a result of riots caused by teenagers smoking e-cigarettes. Although Juul is still the best-selling e-cigarette in the United States at present, after removing many of its most popular products, the company's market value has declined, and there are layoffs, and product sales have also declined. The FDA's authorization may boost Juul's business and help to remove some of the shadows over the e-cigarette industry.

Previously, the FDA approved that all electronic cigarette products sold on the market before August 8, 2016 can continue to be sold, provided that these products are ultimately subject to FDA review. This grace period is given because it is considered that the complete withdrawal of all e-cigarette products from the market before they are reviewed may lead to the loss of a cigarette substitute for smokers, thereby harming public health.

At present, the deadline for tobacco companies to submit applications for approval of products on the market is September 9. Due to the covid-19 pandemic, earlier this year, the tobacco industry, regulators and anti tobacco groups fought a legal battle over timing, which was later postponed.

Tobacco companies must convince the FDA that their e-cigarette products can protect public health, which means they can benefit adult smokers without inducing minors or non-smokers. Juul has been closely monitoring FDA applications recently, hiring executives with scientific and medical backgrounds, and moving its headquarters from San Francisco to Washington.

Balancing risk and reward is a delicate issue for regulators. Research published by Juul shows that their products can change the habits of smokers. But the brand is also popular with teenagers. According to the 2019 National Youth Tobacco Survey, Juul is the most popular e-cigarette brand among middle school and high school students.

Juul's critics, including participants in the smoke-free children's movement, have called on the FDA to reject Juul's application. Meredith Berkman, co-founder of the anti e-cigarette parents alliance, said she was disappointed that Juul was seeking permission to continue to sell menthol e-cigarettes, which are considered a spice more likely to attract minors to use tobacco products.

The FDA tried to ban menthol cigarettes, but last year it gave up trying to ban the spice in e-cigarettes.

The FDA said Juul and other e-cigarette manufacturers submitted applications before the September 9 deadline, and their products could continue to be sold for a year while the FDA reviewed their applications. At the same time, Juul said the company plans to continue sharing its research results in academic journals, conferences and one-on-one seminars, as well as seeking regulatory approval from other countries.

Related news
Electronic cigarettes have been challenged again. The U.S. Federal Court has ordered the FDA to speed up the review of electronic cigarettes.
Report that the US Federal Trade Commission is investigating Juul Labs' marketing practices
Juul asked ITC, the regulator, to stop foreign e-cigarettes from entering the U.S. Market
Slow growth in U.S. e-cigarette sales: a concentrated outbreak of negative news or a rise in flammable cigarette sales
Juul, the US e-cigarette giant, suspended most of its flavored e-cigarettes
Electronic cigarette giant Juul filed an application with FDA: it hopes to continue to sell in the United States
@666 Join illuminati Kingdom in United Kingdom +27839387284
Strong Money Spells in United States (USA) | spiritual rats
here.@ ***
The FDA is expected to withdraw Juul e-cigarettes from the U.S. market
Hot news this week
China has found 35 known cases of the new zoonotic virus Langya
Losses in a single quarter of $ 23.4 billion a record, SoftBank did not carry the plunge of technology stocks and the devaluation of the yen
The prevention and control of the American Monkey epidemic has failed. What should I pay attention to?
Kuaishou launched a self-developed cloud intelligent video processing chip: The chip has been streamed successfully
The new product of Xiaomi MIX is coming: both internal and external dual -screen has been upgraded to make up for the previous generation.
Ministry of Public Security: Single telecommunications network fraud continues to cause 40 % of all electrical fraud cases
A new zoonotic virus, Langya, found in China has not yet been confirmed to be transmitted from person to person
A tech company in Shanghai has been fined 220,000 yuan for swiping orders to improve its ranking on Yelp
Special price "kill ripe"? Bike-sharing platforms have different prices for the same package for different users
Alibaba: Shareholders SoftBank will settle in advance for advanced payment in advance involving a maximum of about 242 million ADR
The most popular news this week
Google Fiber's home has been silent for many years and continues to expand after many years
Gurman: Apple is going to expand advertising into the new iPhone/iPad area
Studies have shown that the attacks by the game company have doubled in the past year
Apple's new iPad does not support 3.5mm headphone hole, Baidu map big update, anchor adopted two protected plants were checked, Rui Dragon 7000 series price stolen, these are the o...
A proposed ban on Internet addiction in California has failed
Industrial star attraction strategy to cope with the American semiconductor strangulation strategy
"Mother of the Chip" suffers! The United States blocked EDA to China: not so simple
8K Super Clear screen records Lingyue of China Space Station! Only 0.72 seconds
Sell to Tencent less than a year Sogou by the big purge: three major businesses are gone
After being suppressed by the United States, why did Ren Zhengfei thank you?