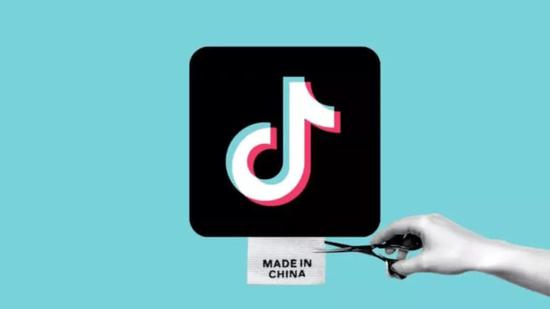 Are young Americans going to the byte Los Angeles office tomorrow to present flowers for TikTok?

The clash of Civilizations

In March, when the byte skipping organizational structure was adjusted, I wrote at the end that this is a path that few people take. During the Sino Indian border conflict in mid June, I said that byte skipping has gone beyond the scope of commercial companies and has become a slice of the great era. I didn't expect a word to come true.

The White House has been pressuring media after India banned TikTok in late June, hoping TikTok could become an American company. The technology company is involved in different countries around the world

A little different from the Google's exit from China, the byte throbbing desire to survive is extremely strong, and all that can be done is in accordance with the U.S. government and law.

But on this rare Road, just because tiktok is made in China, it is necessary to transfer control over the company and products.

In one's life, one should not only consider self struggle, but also historical process. 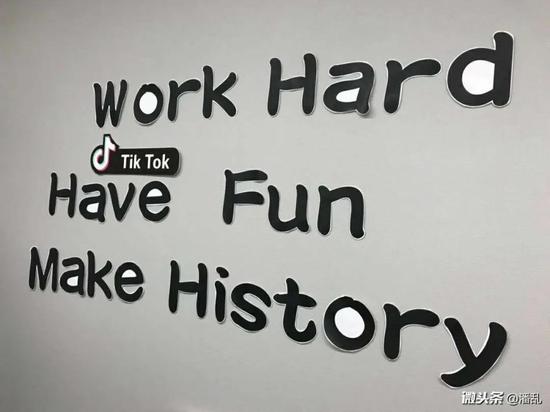 This picture I took in June 2018 at Shibuya's office in TikTok Tokyo, which will TT share offices with others in Japan, with less than 10 employees.

When we had a meeting with tiktok students, they couldn't say what they were.

Tiktok is an intergenerational revolution in social media. People prefer video, especially when the product makes it easy for ordinary people to use, create and get attention.

Sadly TikTok is not yet a real social network.

At that time, tiktok's rapid development overseas was due to its extremely radical launch on Facebook. However, because the scale effect of the original bilateral network of content creators and consumers has not yet risen, and TT retention is too low, Facebook feels that money is not making a fool, and does not regard tiktok as a threat at all.

The rise of short video in 2019 has made Xiaozha fully aware of the fierce competition from Chinese companies in overseas markets. Short video has a global language, viral transmission characteristics, competition is the length of young users.

Facebook has only begun to officially consider tiktok a competitor. When he couldn't do tiktok himself, oza began to bring in geopolitical confrontations and lawmakers in Washington, D.C., to form an alliance to kill him.

Tiktok was originally tied up with political operations, and Zuckerberg was the biggest voice in the early days. 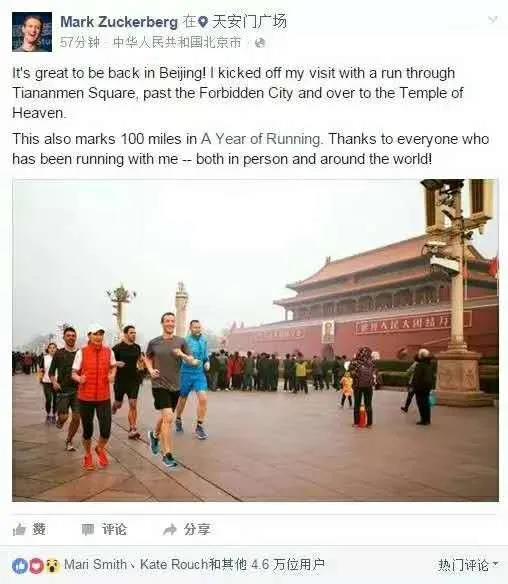 In order to enter the Chinese market, Zuckerberg, who married a Chinese American wife, appeared on the social network as a Chinese son-in-law. He listed his annual goal for a certain year as being able to learn Chinese. He deliberately went to Tiananmen Square to clock in, and went to Tsinghua University to speak in Chinese. Please name his daughter-in-law.

But by the second half of 2017, Facebook's photo-sharing software in China

Since 2018, Zuckerberg has been in a whirlpool over Facebook's data and privacy issues. In 2019, tiktok has sprung up all over the world, especially among young users. Zuckerberg began to demonize tiktok from China and threaten Facebook, and developed tiktok products in Brazil and Mexico. 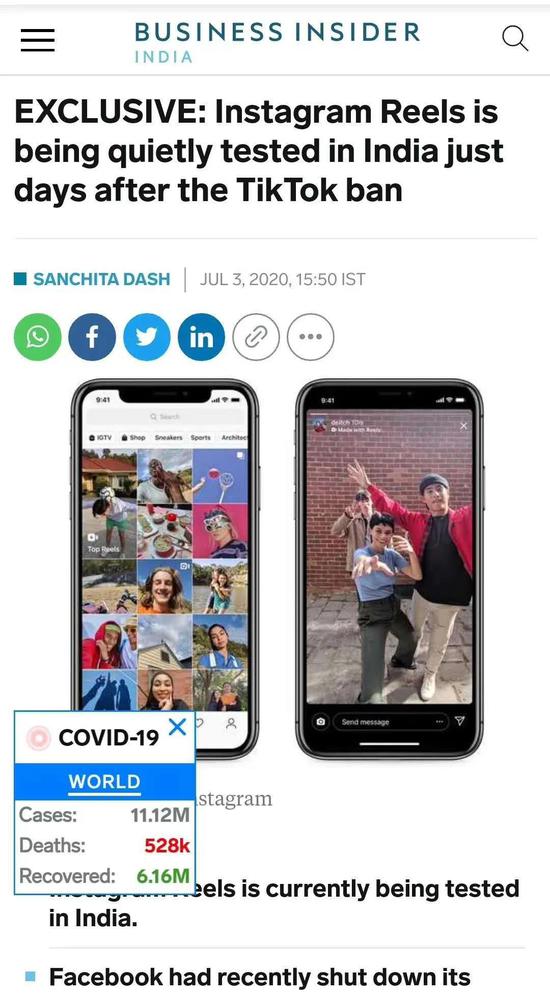 In the U.S. Congress,

After the Indian government banned and tiktok took the initiative to offline, there was a short video vacancy in the Indian market, and Facebook aimed to seize the opportunity to let instagram test the reels function in India to replace it. In this month, reels will be launched all over the world. 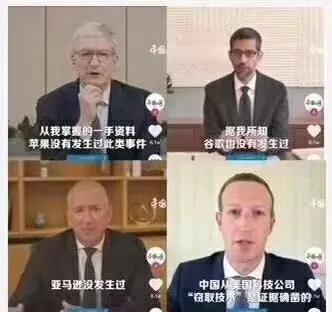 This week the U.S. technology giants were singled out by Congress for collective questioning

As for China's attitude, we can compare Xiaozha's attitude with that of the other three CEOs. We can find that Xiaozha is the most obvious double faced person. Bezos has never been to China. Cook, because the supply chain and consumers are in China, has a consistent attitude. Google has been trying to pursue a set of values, because the values have withdrawn from China, and because the values have shelved the dragonfly plan to return to China, only Zuckerberg has always had two sets of values. It is rumored that during the recent period of Zuckerberg's relationship with China, Facebook cooperated with an office to do relevant content auditing in its US market. 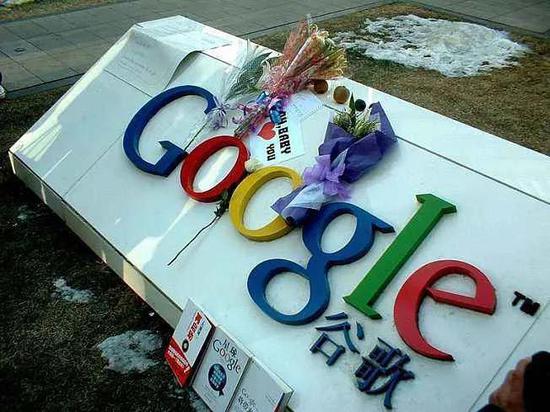 The obvious result today is that byte-hopping is Facebook the biggest winner TikTok giving up control of U.S. business. Instagram Reels will take over the net red and Z generations.

But the first thing I remember was that Google pulled out of China. I don't know. Tomorrow, some young people from America will go to the byte Los Angeles office to present flowers for tiktok?

What I want to say is, if Google did not withdraw from China, it is possible that Baidu is still in the first camp today, Google this powerful opponent to stimulate Baidu will not be so soon complacent arrogant lost.

Today Facebook the U.S. government is used to curb TikTok, rather than its own product power, and market legitimacy has been lost. And this will make more people see that the dominance of American Internet companies around the world is not strong, and it is not ruled out that countries may see the demonstration effect of lighthouse countries and begin to ask Facebook to follow the rules.

And I wrote last year that byte skipping is actually the most Facebook like company in China. Byte has borrowed a lot from Facebook in terms of information flow business, user growth and recommendation algorithm. The same is true of tiktok's accusation that tiktok endangers the privacy and safety of young people and affects their ideas. This query should be transferred to Facebook.

How about tiktok sold to Google in America?

What if, according to the assumption that the enemy can be friends, the United States sells it to Google in order Facebook,TikTok strike from the front?

Users' interests and behaviors are the biggest factors affecting Facebook's fate, because tiktok is in a strong position, and FB's user participation is definitely under threat, especially among the younger generation. Facebook revenue is mobile phone advertising as like as two peas, and TikTok is just taking off in the US.

According to the report, it seems that Microsoft can only take over TT. 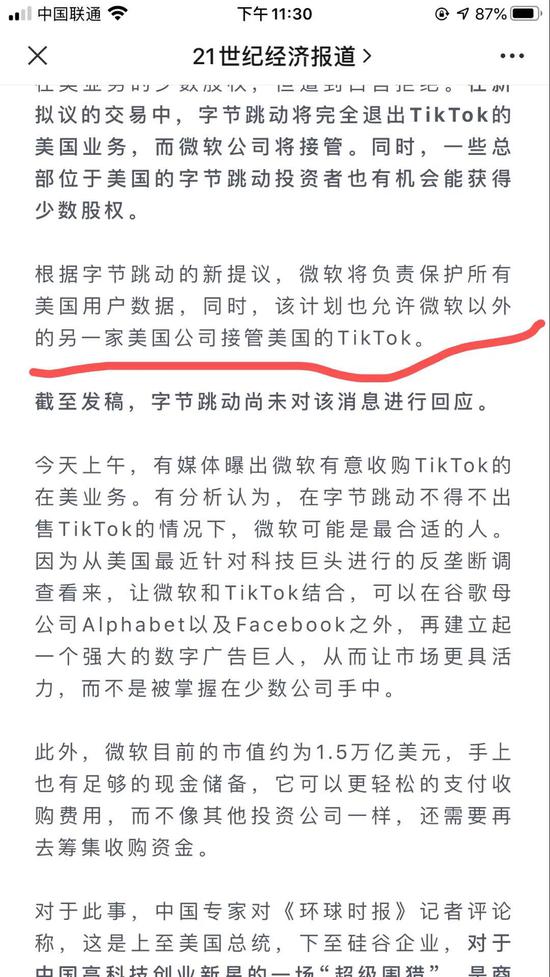 Google. is the company that wants to buy TikTok outside of Microsoft Since the result of being forced to sell can not be changed, I think Google is the best choice for the US government and TikTok to catch up with Facebook.

If Google were to buy tiktok's US business, it would be as meaningful as Facebook's acquisition of instagram. Tiktok's products are in the lead. Google has both financial resources and technology. Tiktok only needs to make breakthroughs in attracting the attention of generation Z.

Moreover, Google's values are more secure than Facebook's, and will ensure that the data is safe and reliable, without fear of being sent to other countries. Google also has YouTube's ready-made medium and long-term video content ecosystem, Google's largest search volume in the digital world and a huge advertising base, which can further accelerate the development of tiktok.

It's going to be the toughest frontal battlefield attack on Facebook.

Related news
Tiktok's life in suspense in America
TikTok America sell Google?
Is it necessary for the United States to kill tiktok?
American youth: saving tiktok
The United States forced to buy tiktok, limited to 45 days, but also intermediate fees! Li Kaifu: the way is incredible
Not buying global business! Why does tiktok sell at a low price in America? Forced to buy at a low price
After TikTok shutdown, U.S. users can continue to use
Do not sell! Tiktok holds hands with Oracle to reach cooperation agreement
Tiktok changes America
It is reported that Tiktok CEO Zhou Zhou's capital has limited capital, and most of the decision -making
Hot news this week
The first in the world! Intelligent screening system for visual impairment of infants and young children
World's first: Sun Yat-sen University has developed a mobile phone intelligent screening system for infants with visual impairment
Sources said Samsung Electronics is considering cutting chip production in the first quarter or a huge loss
The source code of the official website shows that the Microsoft Build 2023 developer Conference will be held on May 23-25.
The rendered picture of Meizu experience Center is exposed: there are cars and mobile phones to build 1000 stores.
At least 29000 facilities were affected, and WeiUnicom announced that there were serious loopholes in QTS and QuTS hero.
256G is not enough! Bloggers bought Xiaomi phone 512G has used up more than 300G: WeChat accounted for 70G
Regret that the medicine is gone! Apple closes downgrade channels for multiple versions such as iOS on 16-15-12.
Xiaomi tablet 6 key specifications steal run: high brush domestic screen Snapdragon 870 can also play!
Musk, the richest man in the world, also suffered a huge loss when he bought bitcoin by Tesla, who "cut leeks".
The most popular news this week
Microsoft's new version of Bing appears briefly: full access to ChatGPT
Bill Gates: the history of ChatGPT is as significant as "PC or the birth of the Internet"
The "iPhone 14" Letv mobile phone Y1 Pro+ sold for only 499 yuan becomes JD.com TOP3.
Man QQ Music lost 1.32 million in playing games in the studio: he was fooled by the anchor!
Intel China special edition Xinshen U suddenly went on sale: 1599 yuan cost-effective
The price of ZTE flagship endorsed by Wu Jing has been reduced! The overall screen impression is better than Apple Smart Island.
Meizu 20 Series supports UWB Ultra Wideband Technology through Radio approval
Huawei P60 series will debut in March: Snapdragon 8+ has a larger aperture than the iPhone 14 Pro Max
China suddenly announces new developments in 6G, and there is little hope that the United States will surpass 6G technology.
Dell said it was laying off 5 percent of its workforce, affecting about 6,650 jobs