President Trump said he would ban the use of TikTok in the US tiktok overseas, which immediately triggered strong reactions from all sectors. Microsoft and tiktok are negotiating with the White House to avoid Trump's total ban on tiktok, according to a Fox TV report on August 2.

Reuters: trump agreed to give bytes 45 days to jump

On August 2, local time, Microsoft issued a statement on its official website,We will continue to explore the possibility of acquiring tiktok's business in the US, This is the decision taken after discussions between Microsoft CEO Satya Nadra and President Trump.

According to Reuters,beautifulPresident trump has agreed to give byte jump 45 days to negotiate the sale of tiktok to Microsoft.The talks between byte hop and Microsoft will be overseen by the Committee on foreign investment, which has the power to block any agreement, the source said.

At present, the White House has not responded.

Late in the night of August 2, the parent company of tiktok, byte hopping, posted an article on its official micro headline number, saying: byte skipping has always been committed to becoming a global company.We strictly abide by the local laws, and will actively use the rights granted by the laws to safeguard the legitimate rights and interests of the company. 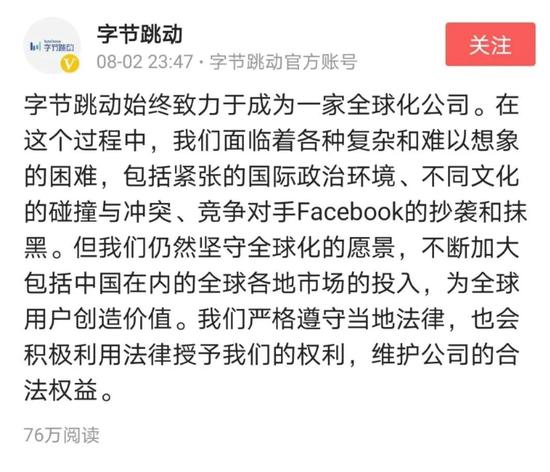 President Trump said in July 31st that he would ban the use of tiktok TikTok overseas in the US, and was first implemented in August 1st, and hinted that he would not support us companies to acquire TikTok.

Special commentator: the US practice exposes the hypocrisy of American fairness and freedom

Commentator Su Xiaohui: the US approach is essentially an escalation of the suppression of tiktok overseas by American politicians.What is exposed is that the United States ignores the principle of fair competition and that the so-called free market economy in the United States is full of hypocrisy.Tiktok tiktok has been pushed by American politicians since November last year, so we can see a series of current US oppressive overseas versions of the jitter.In fact, it's an act of exasperation when competition fails,They have adopted a sinister and repressive attitude towards the legitimate and reasonable success of Chinese enterprises and the recognition of American people. Behind this unfair practice, it is obvious that one side should gain private benefits.

TikTok US General Manager: tiktok will create "the safest application"

TikTok Vanessa Papas, general manager of the U.S. district, posted a video on social networking sites on Aug.1"Will not leave"。

Tiktok will create "the safest application"

Vanessa Papas:I want to thank the millions of American users who use tiktok every day for bringing creativity and joy to our daily lives. We feel your support,We want to say thank you!We're not going anywhere.

Mr papas said tiktok has 1500 local employees in the US and will create 10000 more jobs in the US in the next three years. She stressed that tiktok would create "the safest application.". This video has been supported by many users.

Tiktok is frequently suppressed by the US government on the grounds of alleged "threatening us national security". Trump is threatening to completely prohibit TikTok in the US. The US media has said there is no evidence that TikTok will damage the national interests of the United States as a short video application.

In response to the U.S. allegation of tiktok data security, ye Jun, a lawyer with the U.S. law firm, said in an interview that the accusation was unfounded. 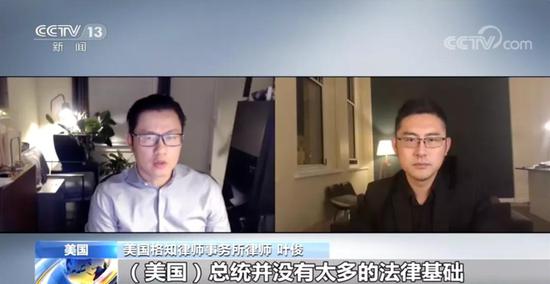 Ye JunIn terms of personal privacy information, tiktok is no different from other companies. At this point, the president of the United States does not have much legal basis to ban this application.

China's foreign ministry: calling on the US side to stop politicizing economic and trade issues

For China's tiktok overtones and overcoming the TikTok security problem, Wang Wenbin, spokesman of the Ministry of foreign affairs, said in July 30th that the US side could not be guilty of any presumption and threatened the Chinese enterprises without any evidence.This exposes the hypocrisy of the US side's so-called maintenance of fairness and freedom, and is not conducive to the interests of the American people and enterprises. 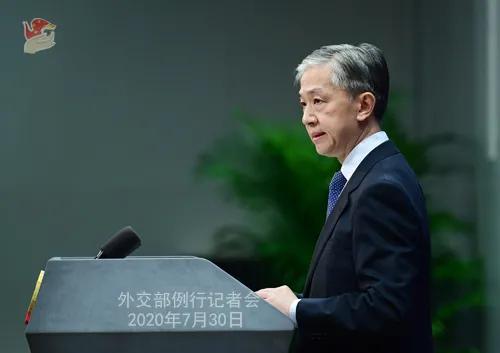 Foreign Ministry spokesman Wang Wenbin:We call on some people in the United States to listen carefully to the voice of the international community, to provide an open, fair, just and non discriminatory environment for all market entities, including Chinese enterprises, to operate in the United States, and to stop politicizing economic and trade issues. This is related to the image and credibility of the United States.

As soon as the news came out that tiktok would be banned, many American people expressed their reluctance and opposition. Many said they hoped tiktok would stay in the United States.

It is understood that tiktok entered the U.S. market quicklyAppleApp store and Google App Store top 10 downloads. Now it's at the top of the app store list. As of the end of April this year, tiktok users downloaded 165 million times in the United States, accounting for about 50% of its total population. The United States is tiktok's second largest overseas market, with monthly active users of about 30 million. 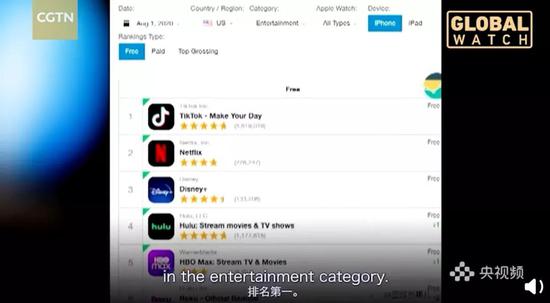 Because tiktok is popular among young Americans, American netizens have launched the topic tag of "saving tiktok".

Many American voice messages from overseas voice tiktok expressed support for TikTok. Tiktok tiktok tiktok is the only hope this year. Users have provided many opportunities for them to stay overseas.

Related news
How did tiktok beat Facebook in the US?
Is it necessary for the United States to kill tiktok?
American youth: saving tiktok
Us tiktok network red switch to other platforms, but there is no perfect substitute
Oracle wants to buy TikTok but it's hard to say
Tiktok's monthly live users in the United States exceed 100 million. How much are American companies willing to bid
Tiktok is approved to build "California on cloud" with Oracle and Wal Mart without technology transfer
Hot news this week
Monkey acne cases have ranked first in the world that the United States has announced the emergency state of public health
Credit card points rule intensive adjustment online transaction points more "valuable"
High reserves and low cost experts: calcium ion batteries replace lithium batteries to stand up to the daily
Alibaba executives interpret financial results: the focus of the consumer side is no longer to attract new, but to do a good job in stratified operation
Losses in a single quarter of $ 23.4 billion a record, SoftBank did not carry the plunge of technology stocks and the devaluation of the yen
The prevention and control of the American Monkey epidemic has failed. What should I pay attention to?
Sources say Samsung's Galaxy Z Fold4 is going up in price: a 512GB top unit will cost more than 13,000
Is the micro -business headache? WeChat friends are suspected to have a big move: 7 can only be posted a week
Kuaishou launched a self-developed cloud intelligent video processing chip: The chip has been streamed successfully
The new product of Xiaomi MIX is coming: both internal and external dual -screen has been upgraded to make up for the previous generation.
The most popular news this week
Ali's largest shareholder sells 34.5 billion US dollars: completely losing the board seat
Meizu Pandaer Great: All products are reduced by 200 and 30 -containing mobile phone cases, heat dissipation back clamps
Domestic brands killed 5999 yuan folding screen phones this year bucked the trend: up 73%
Xiaomi House clerk was exposed to the official response of customers' mobile phone consumption
The laptop is almost burnt by the fire, but the hard disk data can be restored 500GB per day
China's first law bans mobile phones from schools: including children's phones and watches
The second China-led international standard for unmanned aerial vehicles has been officially released
Microsoft claims that Sony pays the developer to block the blockade to prevent the game from logging in to XGP
Chinese anchor accounts have a total of nearly 140 million, have you rewarded it?
Biden signed a chip and scientific bill, a video call of WeChat iOS internal test suspension window, the advanced CPU caused Win11 to be difficult to use, Huawei new machines enter...