Nokia is no longer young. Of course, it's hard for those old brothers of the same era to compete with those fierce young people in China: Sharp has tried to re-enter the Chinese market for many times, but has no Japanese pedigree; Motorola has lost its appeal when it is under Lenovo's command, instead, it concentrates on overseas; BlackBerry has no improvement after it was acquired by TCL It will stop selling on August 31 this year. If there is no follow-up, it may come to an end completely.

In this way, Nokia, which is now in the hands of HMD, is still on the way: function machines, low-end smart machines, and even top-level video flagship like Nokia 9 pureview are being launched in an orderly manner, without any decline.

Remember the Nokia C3 10 years ago?

At that time, as a low-end entry-level mobile phone, Nokia C3 focused on the design of "touch and type key and touch", which brought more operation methods for users who used to operate the Nokia tablet with one hand, and the touch screen could improve the efficiency of one hand operation more. Starting with practical interaction to improve the user experience, this is C3's original intention ten years ago. 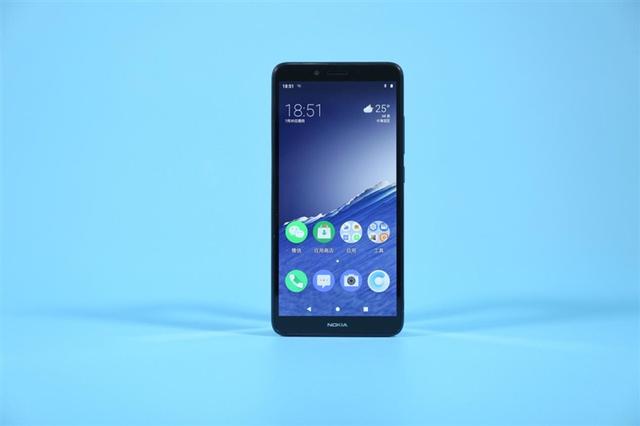 Ten years of reincarnation, today in 2020, the reborn Nokia C3 is born. It is still an entry-level positioning, but it has become an Android intelligent machine with the initial price of 669 yuan. It is equipped with purple light zhanrui sc9832e 4G mobile platform, classic polycarbonate shell and native Android 10 system, supporting fingerprint identification and payment.

In particular, after ten years of reincarnation, Nokia C3 is still paying attention to interaction. It has a unique "heart to heart" button on the left side of the fuselage, which can realize functions such as payment with one button, which can be regarded as a different practical play experience in the entry-level machine.

Before we start today's evaluation, let's take a look at the specific parameter specifications of Nokia C3. Appearance: detachable battery! Youth is back 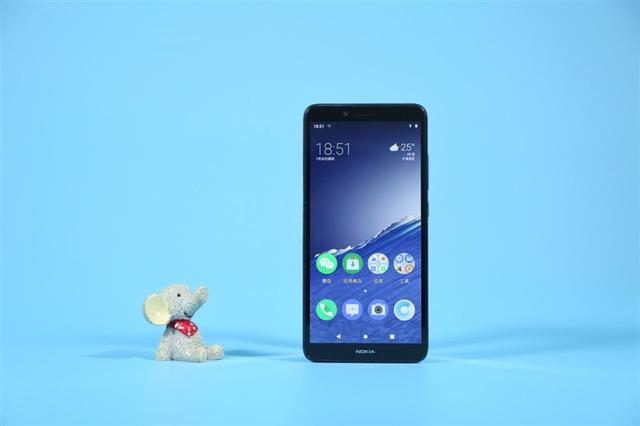 Nokia C3 adopts the traditional family front design of Nokia. Compared with the previous model C2 (there is no version of the National Bank of China), there is not much difference between them. They are basically the same forehead and chin. 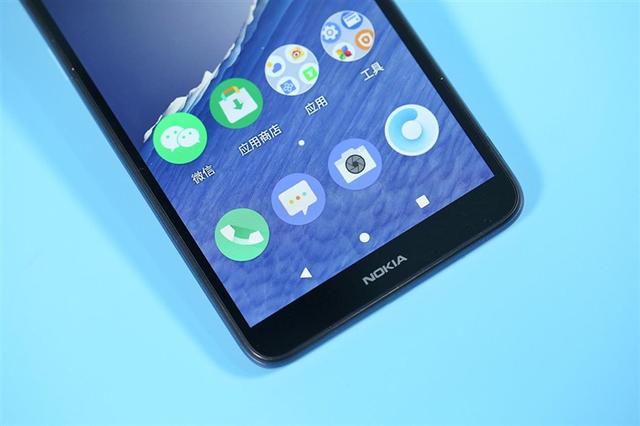 Nokia logo on the chin 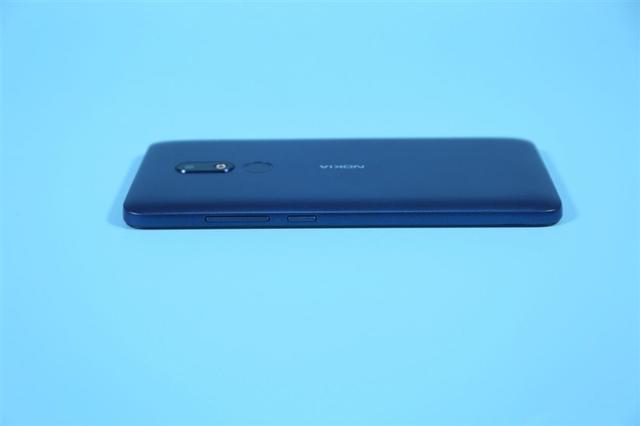 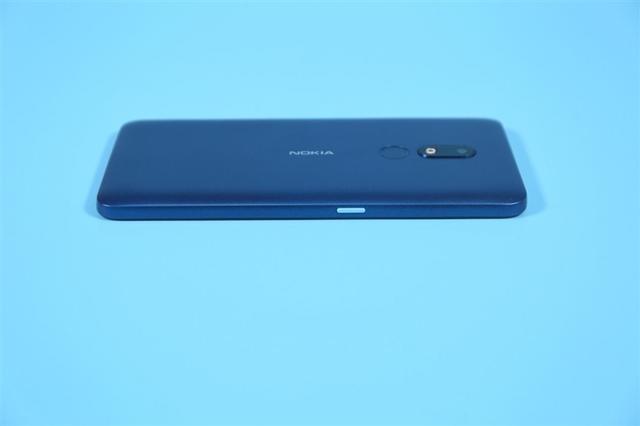 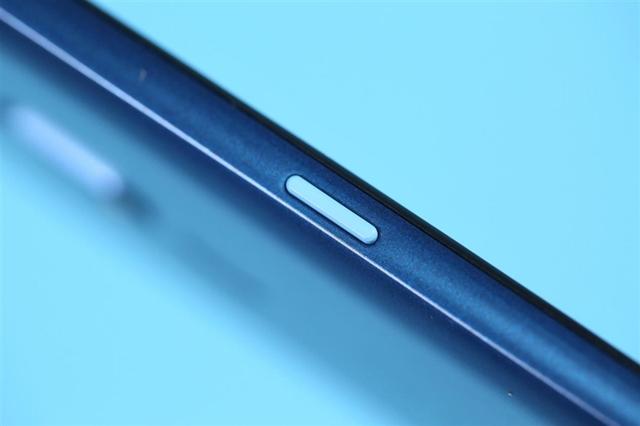 Custom "heart button", the specific usage will be described in detail later 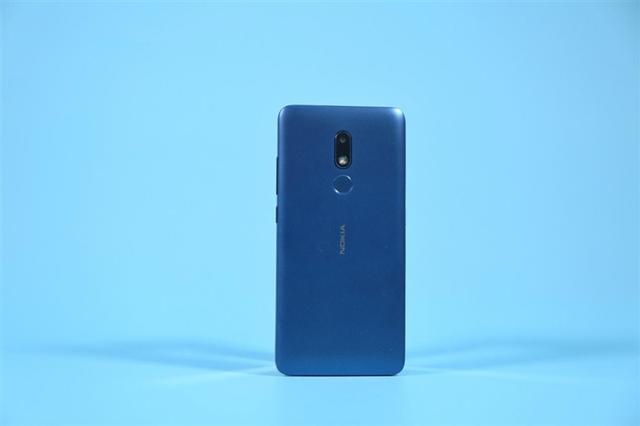 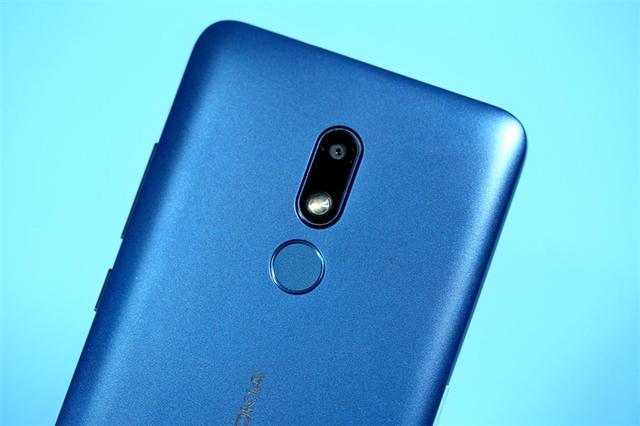 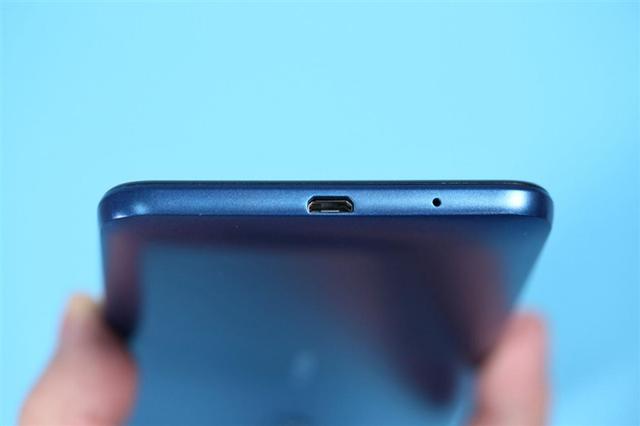 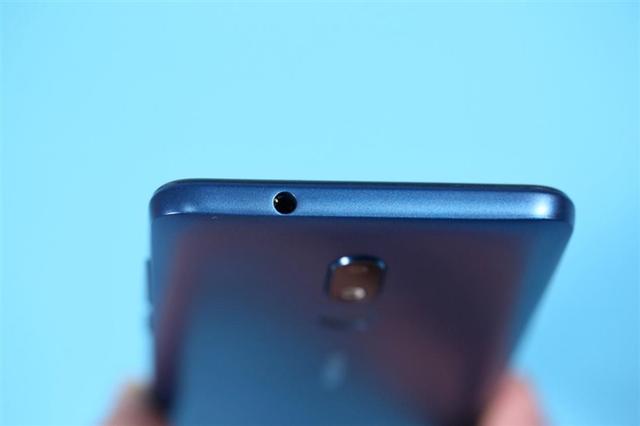 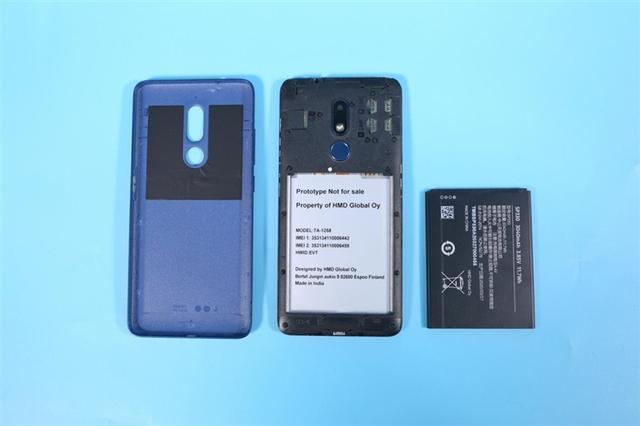 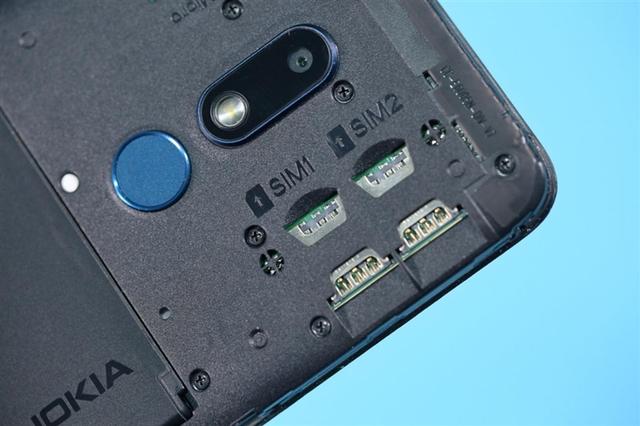 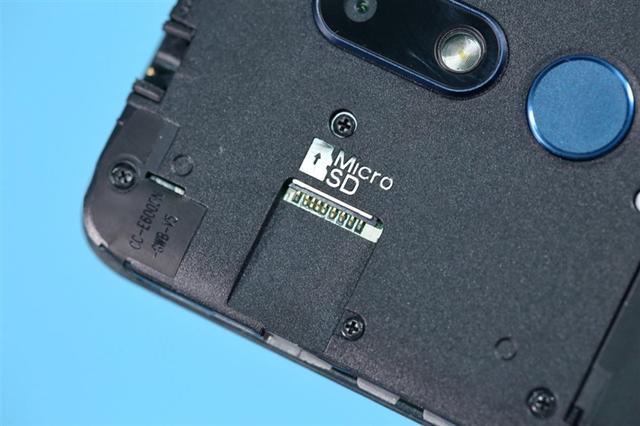 The processor is the same as the previous C2 and is a Ziguang sharp SC9832E, processor released in 2018. Using 28 nm HPC process manufacturing, the interior is equipped with four A53CPU cores, the main frequency is 1.4 Ghz, integrated network system supports five-mode LTE Cat.4, support VoLTE、ViLTE、VoWiFi function.

In 2018, it was the most integrated 4G LTE chip platform in the world at that time, and achieved a high level of balance in terms of performance, power consumption and integration. Two years later, it can be accepted on a 100 yuan computer. 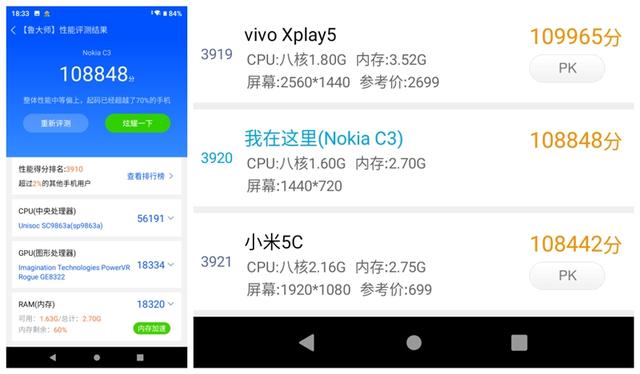 According to master Lu's scoring system, the overall performance of Nokia C3 is roughly similar to that of the snapdragon 652 model years ago and Xiaomi 5C, the only S1 model. 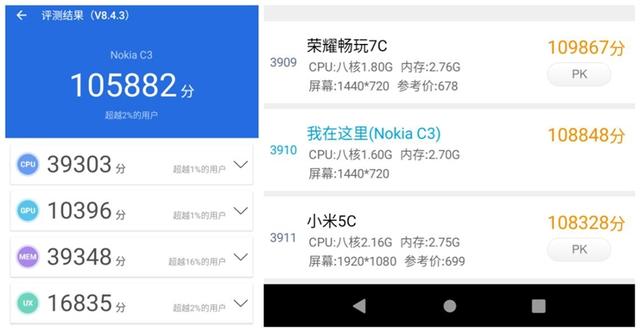 In a comprehensive comparison, the CPU single core capability of Ziguang zhanrui sc9832e is similar to that of Unitech Helio P22 and Helio p23, and the multi-core capability is close to Helio P22, which is slightly different from that of Helio p23. The GPU part of ziguangzhanrui sc9832e is mali-t820 MP1, a typical entry-level GPU, which is similar to the performance of Xiaolong 435 in that year. Such gfxbench running points are in line with expectations. At present, it is not clear about the flash type and specific protocol adopted by Nokia C3. According to the androbech test results, the read-write speed of the flash memory of Nokia C3 is slower than that of the mainstream EMMC 5.1 flash memory in the current entry-level computers.

The original experience of Android

Nokia C3 is equipped with native Android 10 system. How native is it? 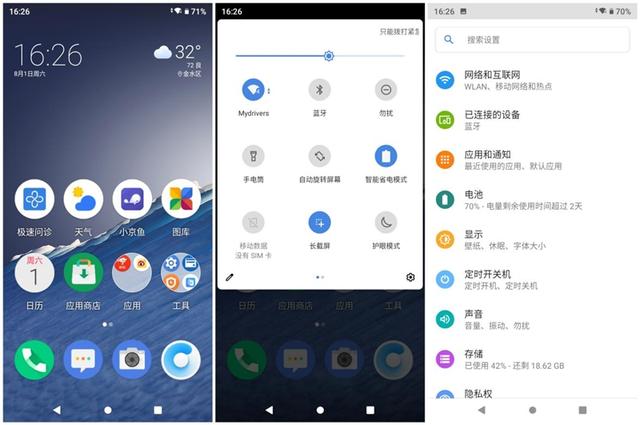 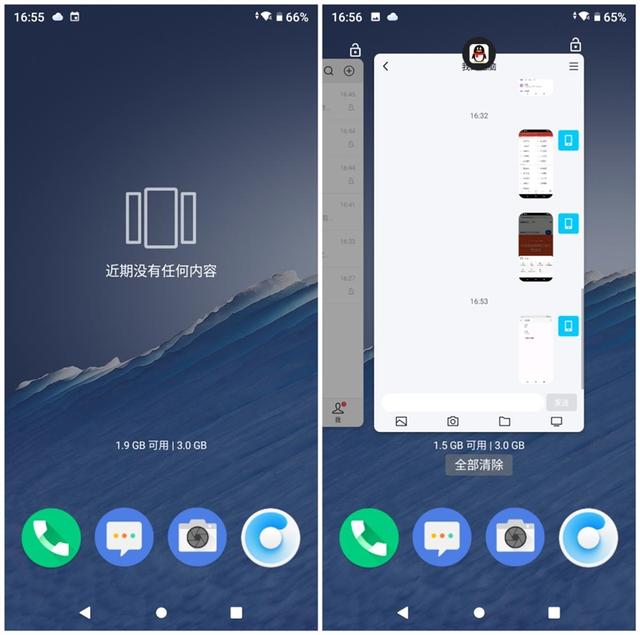 However, native doesn't mean that it is too simple. Basic software such as app store, mobile phone manager, calendar, weather, system browser and other basic software are developed by local suppliers and built-in ROM.

The biggest feature of Nokia C3 is that there is a physical button on the left side of the phone - heart button. It can help users to achieve one button direct mobile payment, physical detection and other functions, easy to use. In order to let the user use the memory feeling more, the key adopts the bright blue design.

You just need to double-click the "heart button" on the left to enter the wechat payment interface. Even if the screen is locked, it can be directly accessed by one key. Different from the conventional five steps of "wake up the screen - unlock the mobile phone - Open wechat - click the plus sign in the upper right corner - select collection and payment".

The double-click and long press functions of Nokia C3 "heart key" support user-defined. In "Settings - intelligent control - shortcut key", select any application in the phone and some specially designed functions to wake up quickly. For example, you can press and hold the "heart to heart" button of Nokia C3 to call up the built-in "quick inquiry" to realize online consultation and prescription.

Press the power button five times continuously to enter the emergency call interface and quickly dial 110, 119 or 120. In addition, with the post capacitive fingerprint provided by Nokia C3 and the fingerprint payment provided by WeChat and Alipay, the "heart button" can also be paid more quickly. Nokia C3 provide 3040 mAh capacity batteries, with HD screens and low energy consumption purple light sharp SC9832E, life is not expected to be too bad, then we use online video testing to verify.

At 70% brightness and 30% volume, connect Wi Fi to play 720p online video, and we get the above power consumption record statistics. Thus, it can be estimated that the continuous video playback in this environment can last about 6 hours. 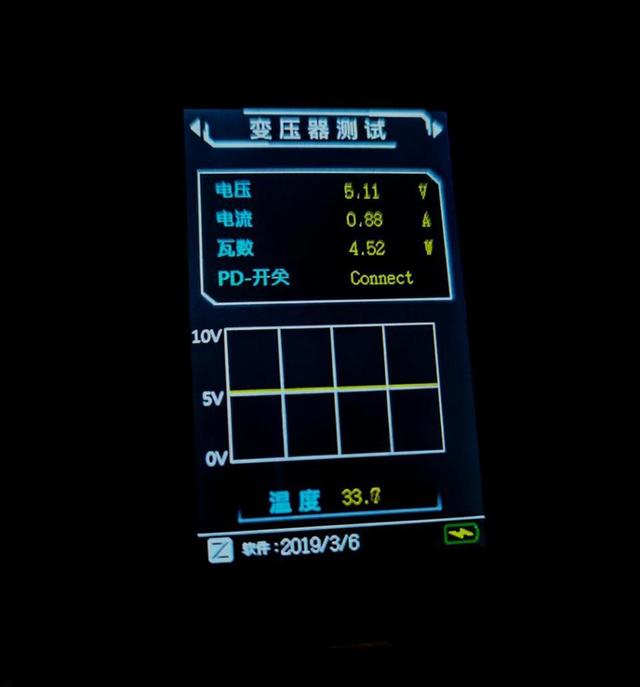 Over the years, the development of imaging technology has not benefited entry-level students much. The Nokia C3 has an 8-megapixel camera with auto focus, f2.0 and an LED flash. The software also supports panoramic, delay and HD video recording. It's just that the image quality is not so good that Nokia C3 is not recommended as the main camera. 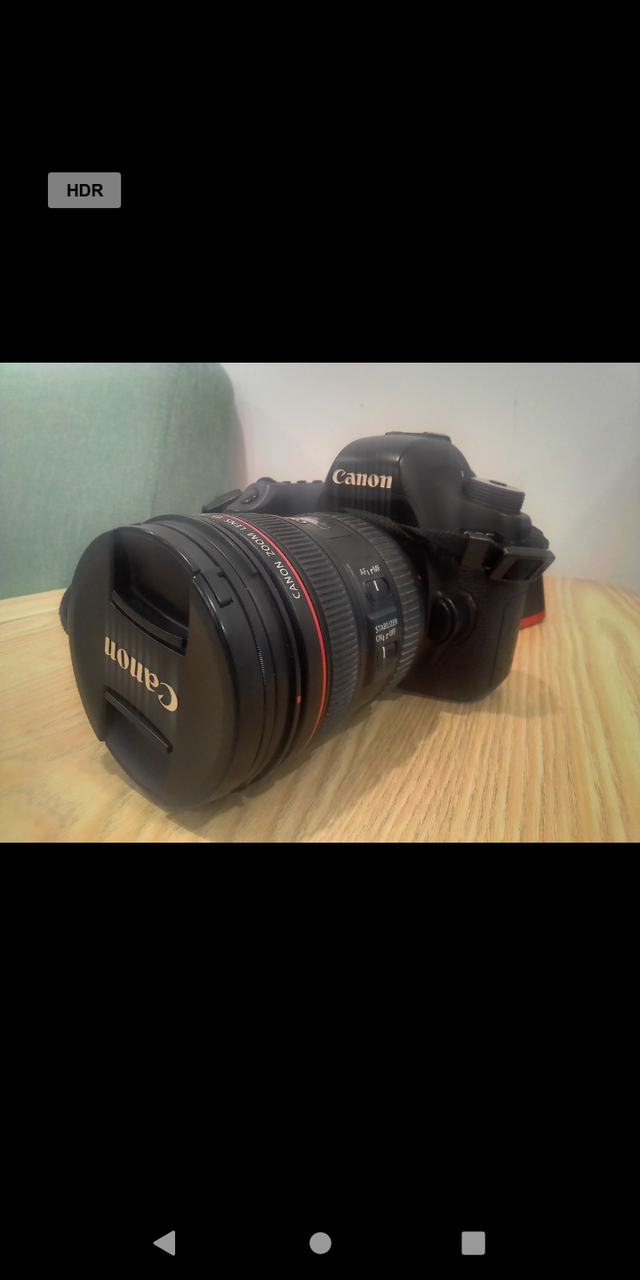 The Nokia C3 feels like "Steampunk": the latest native Android 10 system with the entry-level chip of 2018 is presented in a polycarbonate shell full of memories, while retaining the detachable battery design not seen in many years. Different time and space hardware and software collocation, familiar but unfamiliar.

Nokia C3 is a more typical spare machine, purple light sharp SC9832E with 3 32G memory storage, in today's view is no longer suitable for use as the main machine. Fortunately Nokia C3 with a simple native Android system ,3 G of memory should not be stressed QQ、 WeChat, a common software.

A 3040 milliampere battery is a common configuration in many of the same-class models, and a HD screen keeps online video live for about six hours.

The biggest feature of Nokia C3 lies in the physical buttons on the left side of the phone, the heart button. It can help users to realize multiple functions such as direct mobile payment and physical detection with one button. Double click the "heart button" on the left to enter the wechat payment interface. Press the power button five times in a row to enter the emergency call interface. The heart key can also match the post capacitive fingerprint identification, allowing users to complete WeChat / Alipay fingerprint payment more quickly.

For the old Nokia fans who still have deep feelings for the five letter logo of Nokia, the starting threshold of Nokia C3 is not reliable, and it is worth recharging for faith at a low cost.

Related news
Nokia develops C3 smartphone with unisoc chipset and 3gb memory
Nokia C3 evaluation: zhanruixin, native Android Qingliu
Overseas sales of poco C3 exceed one million
Hot news this week
With the NIL technology, Canon wants to provide China with a lithography machine comparable to the EUV
The Long March 9 is basically confirmed: the low-orbit carrying capacity of 150 tons can carry the entire space station into space
A small plane in the US has crashed into a 30-metre high voltage power line and got stuck: 80,000 people affected
Alibaba launched a new cross-border e-commerce platform in Spain, aiming to operate independently in the middle and high-end market
Can recording others' wechat chat records be used as evidence? The Beijing Internet Court has an answer
Google is concerned that Microsoft's acquisition of Activision Blizzard will affect the ChromeOS experience
When pure water is used in China team to solve the problem of seawater hydrogen production: it is expected to become an original industry
It's not just Huawei! Beidou has penetrated more than 20 industries and applied more than 15.5 million products
The second generation Snapdragon 8 flagship! Mi 13 toughened film appeared: four sides and other narrow screen accounted for a stable ratio
A Tesla crashed into two cars in Taizhou, Zhejiang province, killing two and injuring one, police said
The most popular news this week
The first Snapdragon 8 series phone in the popular colors of 2023 hits the shelves: a stunning 5600 yuan design
Why do laptops need more memory?
Increase production capacity! Apple speeds up iP14 Pro shipments: Arrive as soon as New Year's Day 2023
What a fan! Netizens spend ten thousand yuan to get three mobile phones at once: beautiful
A bachelor's degree is needed for a New York City rat control manager who earns 1.2 million yuan a year
4090/80 Take that! Third party pre-orders for AMD RX7900: The most expensive over 11,000
Mi 13 series press conference preview: It is likely to start 3999
Wu Jing endorsed the new model, which goes on sale next week: the 512GB version is almost half the price of the iP14 Pro Max
Why did Chinese fans come to Qatar
Sega Technology: intends to increase the total capital of US $1 million in US Electric with related parties