Tencent's response to wechat ban issued by the United States: under evaluation

U.S. response to WeChat's ban on Tencent: under evaluation

According to CCTV, on August 6, local time,The United States announced that it would prohibit any US company or individual from trading with tiktok parent company byte skipping and wechat parent company Tencent in 45 days.

This means that byte hopping will complete the transaction with tiktok within 45 days, or it will be banned from operating in the United States. 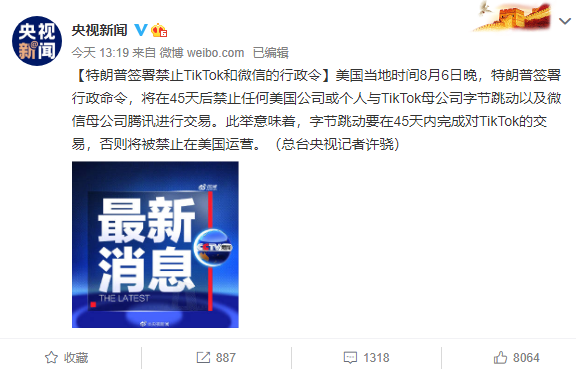 After the news came to light, Tencent's share price fell in response to the news, falling 10% at one time in the session to the lowest of HK $499.4, with a market value of HK $5 trillion in Tiepo. Before the deadline, Tencent shares retreated to HK $527.5, but still fell 5.04%.

According to the latest reports of domestic media,Tencent spokesman said on Friday, Tencent is evaluating the executive order for full understanding. As of press release, byte beat has not yet responded to this message.

Therefore, riot's "League of Legends" and epic's "fortite" will not be affected for the time being.

Related news
Wechat in Apple's Google App store may be banned. What if wechat can't be used on iPhone
How does Tencent's business influence in the United States behind the administrative order?
Tencent said Trump's wechat ban may not apply to applications in China
The overseas version of enterprise wechat has been renamed from wechat work to wecom
Tencent: existing wechat users in the U.S. may continue to use but cannot obtain new users, and will continue to negotiate
Change name to avoid ban? Tencent: wecom and wechat are different products
Has soared to 54,000 Wechat and downloads surged in the U.S. over the weekend
Hot news this week
AMD is licensed to continue to supply Huawei? Don't be happy too soon
Tencent responded to the Commerce Department's decision to continue communicating with the U.S. government for a long-term solution
Us chip giant obtains supply license to Huawei: will abide by US law 100%
Is it worth buying from 7499 yuan? A picture to understand the glory Hunter Game v700: top performance, lightweight body
Lenovo announced that thinkbook New Youth creation book will be launched on September 24: support 180 degree reversal
IPhone 12 pro's latest HD shape exposure: industrial design and color matching changed
Amd CEO Su Zifeng will deliver keynote speech at CES 2021: sharp dragon 5000 APU is expected to appear
PS5、Xbox have cancelled the optical drive! Will the game disc die
Baidu online disk international dubox experience: clean and easy to use, but not with domestic users
As early as this Sunday, the US Department of Commerce banned the distribution of tiktok and wechat apps in US regional app stores
The most popular news this week
Apple continues to take the affordable route! IPhone se plus exposure: larger screen with A14
Microsoft is developing a cloud-oriented HSD holographic memory
Compatibility issues after win10 v1903 / 1909 update: Microsoft confirms
Huawei Guo Ping: Huawei is willing to use the Qualcomm chip once it is licensed by the United States
Huawei officially launched Huawei service number: messages can be pushed through the negative screen of Huawei mobile phone
Microsoft resend kb4577063: fix WSL 'element not found' error
The galaxy A42 5g may be the first mobile phone to use snapdragon 750g chip
Arm releases a new generation of neoverse processor: a 50% increase in single core and nearly 5nm process
Americans can not continue to feel at ease with the revelations of secret App serving the police and the rich
How long can Huawei mobile phone chips last? Guo Ping: we are still looking for ways to consume hundreds of millions of them every year