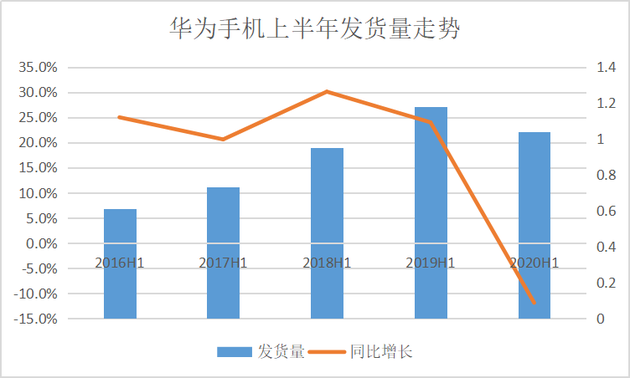 "We have been sanctioned, our hands and feet are tied. Although it is an unfair game, we have still won the first place in the world." Yu Chengdong said. However, he admitted that under successive U.S. sanctions, Huawei's annual shipments of mobile phones may be less than 240 million in 2019. "Our mobile phone business is very difficult now, chip supply is difficult, very out of stock." He said.

September, Huawei will launch a new generation of Mate40 products, still equipped with Kirin chip. The us ban on Huawei chip supplies will take effect on september 15th, so kylin's flagship chip will be out of print ," Huawei only dabbled in chip design, not in heavy-asset chip manufacturing. Kirin chip can not be produced, this is our very big loss ."

Fortunately, in the first half of this year, Huawei achieved very good results in IOT business.

Under the outbreak of IOT business, Huawei's consumer business achieved sales revenue of 255.8 billion yuan in the first half of the year, with a year-on-year increase of 15.85%. The overall revenue growth of consumer business is still in the lead among Huawei's three pillar businesses.

In addition to hardware, Yu also mentioned Internet services in particular.AppleThe annual revenue of Internet services of apple is more than 48 billion US dollars, which is a very important source of Apple's profits, with a net profit margin of more than 60%. Huawei's annual Internet revenue is only $5 billion, "it looks like it's not small, but there's a lot of room here."

In the face of Kirin chip supply interruption, Huawei has added chip orders to MediaTek, and a few days ago, it has also achieved a patent licensing settlement with Qualcomm.

However, this can not fundamentally remove the risks faced by Huawei's mobile phone business. Today, Yu Chengdong also called on Chinese enterprises to achieve innovation and breakthrough in basic technological capabilities to win the next era if they want to break through the blockade of the United States.

He pointed out that we should make breakthroughs in semiconductor manufacturing, including EDA design, materials, production and manufacturing, process, design capability, packaging and testing, etc. "Whether it's overtaking on a curve or half way, we want to take the lead in a new era. There is nothing that can't be done in the world, only not enough determination and not enough investment. "

It's not just chips. Yu Chengdong believes that in the era of intelligent full scene, Chinese enterprises also need to build capacity in the standard ecology of operating system, database, cloud service and IOT, so as to make our ecological development.

On the operating system and ecological platform, Huawei also has its own solutions: Hongmeng OS and HMS.

Huawei's smart watch has been carried on Huawei's OS products this year. In the future, all of Huawei's IOT products, including PCs, tablets and even mobile phones, may adopt Hongmeng OS. "Hongmeng OS will become a global operating system in the future." He said.

Xu Wenwei, director of Huawei and President of the Strategic Research Institute, said that in the field of operating systems, Huawei believes that the leader of the future model should be open to close and collaborative to split. Huawei's industrial proposition is: open and open source, CO build OS ecology, and support distributed full scene terminals.

In terms of HMS, Yu Chengdong disclosed that there are more than 80000 applications of integrated HMS services in the world. In the first half of this year, the number of monthly live users of Huawei's terminal cloud services has exceeded 520 million. "Our ecological experience is improving every month, every week and every day, so that those who used to only support Google GMS can complete the integration of Huawei HMS in a few hours."

"For us, the US sanctions are very painful, but at the same time, it is a major opportunity to force us to upgrade the real estate industry as soon as possible." Yu Chengdong believes that China should build up the capability of the whole basic system such as operating system, ecological service and chip, so that Chinese enterprises can not only be controlled by others, but also participate in global competition and earn more profits.