It was reported on August 23 that recently, some netizens reported that the English name of the overseas version of wechat was changed from wechat work to wecom. The company's WeChat official has no official announcement about the change of name, but its overseas website has been changed, and Apple and Google App Store have been adjusted accordingly. Public information shows that enterprise WeChat is an enterprise communication and office tool created by Tencent WeChat team, with a communication experience consistent with WeChat, which can help enterprises connect internal, connect ecological partners, and connect consumers. 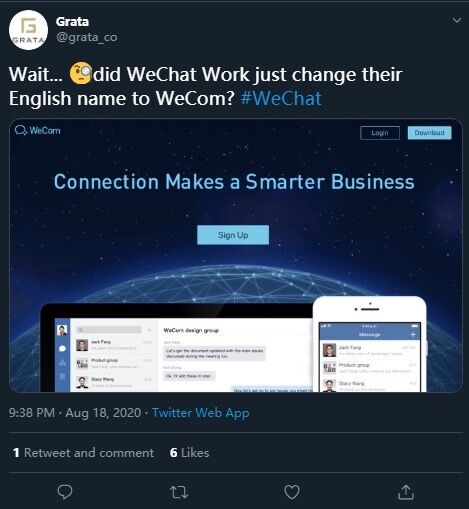 Some netizens speculated that the renaming of the overseas version of wechat may be related to the relevant ban in the United States. At the beginning of August, trump signed two administrative orders, respectively setting restrictions on tiktok, an overseas video platform with byte skipping, and wechat, a social communication software of Tencent, requiring that US companies should not be allowed to trade with wechat parent companies after September 20.

After the news was released, it was speculated that,AppleMany Tencent products such as wechat may be removed from the app store. The move has caused opposition from apple and other companies. Apple analyst Guo Mingzhen pointed out in the latest report that if Apple is forced to remove wechat from stores around the world, theniPhoneShipment is expected to plummet by 25-30%; if it's just the US store off the shelf wechat, the shipment volume will also be affected, down 3-6%.

On August 21, foreign media reported that an American wechat user organization "wechat user alliance" would formally submit a complaint to the regional Federal Court in Northern California, accusing President trump of violating their constitutional rights by signing an executive order against wechat.