Will Huawei's mobile phone sales plummet by 75%? Xiaomi ov ready to carve up the market?

As the United States continues to upgrade the ban on Huawei, the current situation of Huawei is becoming extremely difficult, especially in the case that the manufacturing of self-developed chips is limited and the path of purchasing third-party non American chips is further blocked.

If these problems can not be solved as soon as possible, Huawei may fall into trouble after existing chip inventories run out

Huawei shipments of mobile phones will plummet 75% next year under the US ban?

The IDC report showed 55.8 million smartphones shipped Huawei the second quarter of this year, down 5.1 percent from a year earlier, but still outstripped Samsung (54.2 million) and became the world's largest smartphone maker with a 20 percent market share

Huawei has replaced American chips by replacing the spare tire and using chips from third-party suppliers such as China, Japan, South Korea and Europe, and has been able to continue to operate at high speed under the ban.

But, uh,With two consecutive rounds of U.S. sanctions this year on Huawei upgrades, Huawei's self-developed chip manufacturing has been blocked, and the path to purchasing third-party non-U.S. series has been blocked, Huawei in an unprecedented difficult situation that may face in the future 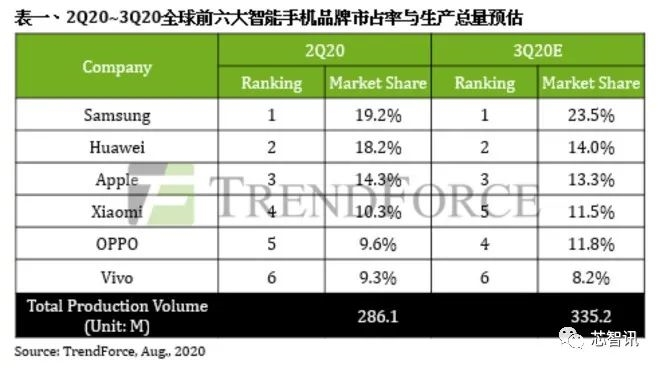 According to a recent research report released by Credit Suisse, Huawei's smartphone shipments will plummet by 75% next year.

Huawei's market for hundreds of millions of smartphones will be carved up by apple, Samsung, Xiaomi, oppo, vivo and other head smart phone manufacturers.

For Huawei, although many chip manufacturers can still supply them before September 15, most of these are orders before the ban, but Huawei can still purchase some chips and components through the spot market.

Based on this,It is estimated that Huawei may further reduce its overseas business and protect its domestic market.

Huawei's communications business has been blocked by the u.s. and many of its allies, such as australia and the u.k., and since last year Huawei mobile phone access to overseas markets has been blocked (not at home), especially in its main market, due to the failure of google's GMS services

Combined with the impact of the new U.S. ban, Huawei has to significantly shrink its overseas business and focus on the domestic market.

Even voices in the industry believe that Huawei will give up mobile phone business in the future to protect communications business.

Based on the judgment of the future development and strategic adjustment of Huawei's mobile phone business, some mobile phone brand manufacturers have begun to lay out ahead of time, ready to compete for the mobile phone market that Huawei is about to vacate.

Recently, it has been reported that Apple's iPhone 12 series is expected to ship 75 million to 80 million units this year, which is higher than the 75 million unit target of last year's iPhone 11 series, especially under the influence of this year's new crown epidemic.

Although Samsung reduced its 2020 total shipment target from the initial 330 million units to 280 million units at the end of June, Samsung may have to reassess its shipping target due to the launch of a new round of ban against Huawei on August 17.

In the first quarter of 2019, Huawei took 17% of the global high-end smartphone market (more than $400), second only to Apple (47%) and Samsung (25%). It is worth mentioning that the domestic mobile phone manufacturers also got 2% market share. 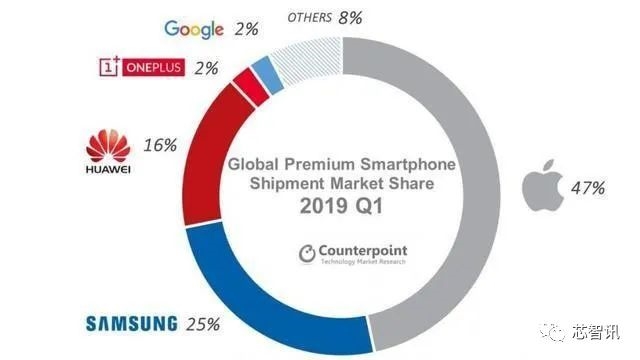 Clearly, if the Huawei phone business really shrinks sharply, Apple and Samsung will undoubtedly be the biggest beneficiaries in the high-end smartphone market.

of course,For head mobile phone manufacturers such as Xiaomi, oppo and vivo, the middle and low-end market will be divided by them. At the same time, it is also an opportunity for them to increase the market share of high-end smart phones.

According to media reports yesterday,Oppo also raised its overall shipping target for the second half of the year.OPPO insiders also said in media interviews:

It is worth noting that, according to IDC data, the total number of oppo mobile phones shipped in 2019 was only 114.3 million. However, in the first quarter of this year, oppo did not enter the top five list (vivo ranked fifth with 24.8 million units). In the second quarter, only 24 million units were shipped. That is to say, in the first half of the year, the number of oppo mobile phones shipped was less than 49 million.

So why does oppo feel that its smartphone shipments in the second half of the year can double to 100 million units compared with the first half? Even with the shipping volume of the sub brand realme, I'm afraid it's a bit exaggerated. Obviously, oppo is fighting for Huawei's upcoming overseas mobile phone market.

However, supply chain sources said that oppo's 100 million units in the second half of this year may not reach, but it is expected to increase to 85 million units.

In addition, it is worth mentioning that oppo has merged channels and shared after-sales with its sub brand realme and Yijia to further enhance its competitiveness.

Recently, Yijia Liu zuohu has also started to serve as senior vice president of OPA parent company Oujia holdings, who will be fully responsible for the planning and experience of OGA's product line. Based on the successful performance of Liu zuohu's Yijia brand in the high-end smartphone market, xinzhixun believes that this may be just to help oppo further explore the European high-end smartphone market.

In addition to oppo,Xiaomi is also increasing the size of the European market, and after redmi's independence, Xiaomi's high-end mobile phone market also has a good performance.

Among them, Xiaomi has mainly focused on the European market in the past two years, with a 65% year-on-year increase in the shipment of smart phones, and its market share has entered the top three for the first time.

According to canalys, a market research organization, in the second quarter of the European smartphone market, Xiaomi's market share reached 17%, and its shipment soared 65% year-on-year, even surpassing Huawei (Huawei's 17% year-on-year decline). 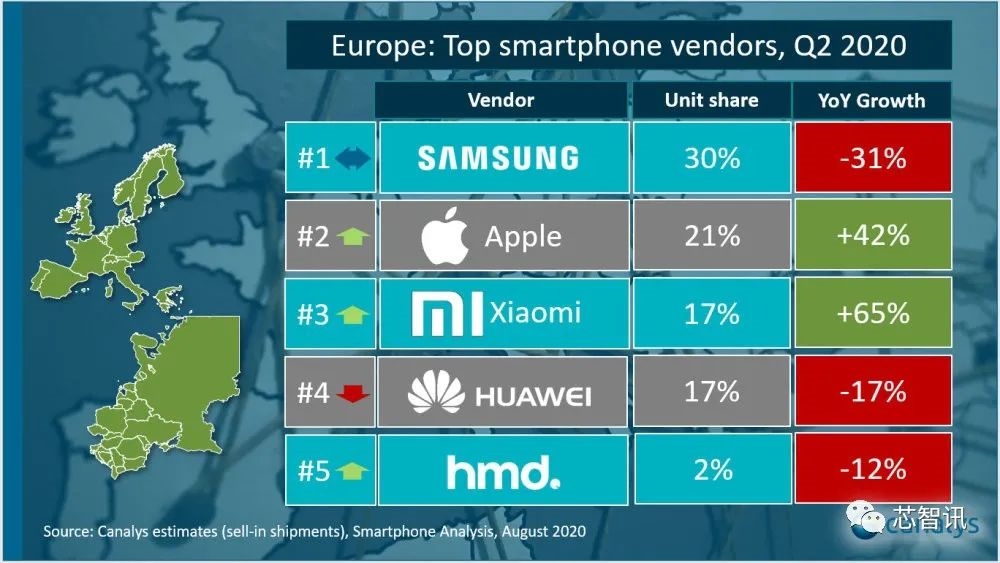 Some netizens reported that:

Oppo also said in an interview with reporters that the shipping target of 100 million units in the second half of the year will increase by 30% compared with that in the first half of the year.

Although Huawei's communication business and mobile phone business are standing out from the fierce competition, it is sad that Huawei, which is not afraid of market competition, has been subjected to brutal pressure from the United States. The ban is gradually making Huawei's communication and mobile phone business lose competitiveness, and even gradually lose the qualification to compete in some markets.

Market competition is cruel! At the same time, Huawei's competitors are taking advantage of the situation to seize Huawei's vacant market. For example, in the communication equipment market, Huawei's competitors such as Ericsson, Nokia and Samsung have become direct beneficiaries while the United States alliance has banned Huawei 5g.

Similarly, in the smartphone market, Huawei's competitors will naturally become beneficiaries. How attractive is the 20% global market share of Huawei's mobile phones? But how much each family can grab depends on their own Kung Fu. 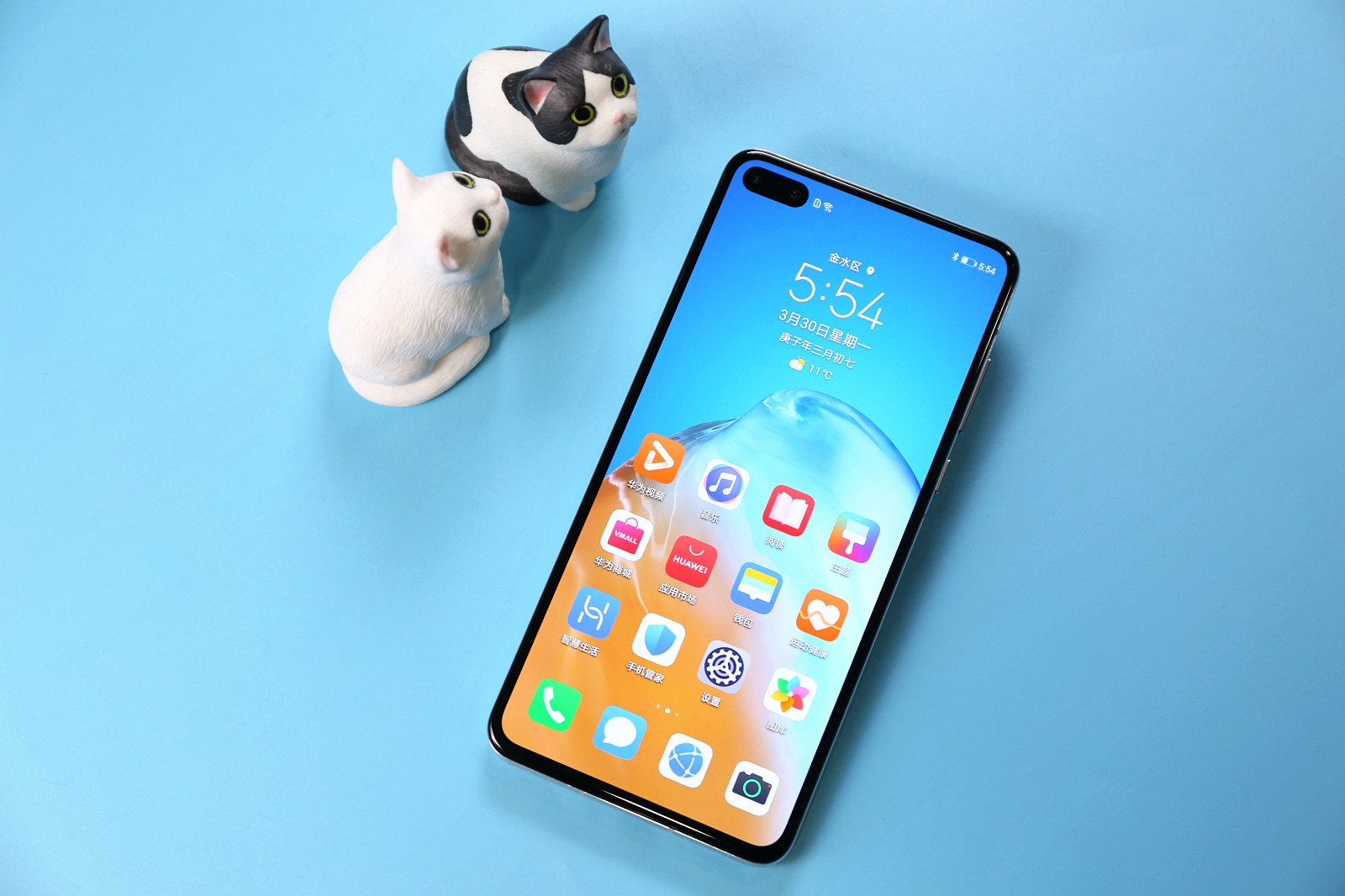 Related news
Huawei to launch Huawei card digital credit card
Will Huawei's mobile phone sales plummet by 75%? Xiaomi ov ready to carve up the market?
Disassembly report: Huawei WiFi 3
Xiaomi: Yang Qian became the spokesperson of Xiaomi Civi
Hot news this week
Kuaishou launched a self-developed cloud intelligent video processing chip: The chip has been streamed successfully
Ministry of Public Security: Single telecommunications network fraud continues to cause 40 % of all electrical fraud cases
Special price "kill ripe"? Bike-sharing platforms have different prices for the same package for different users
A tech company in Shanghai has been fined 220,000 yuan for swiping orders to improve its ranking on Yelp
Text message color, picture quality compression! Google calls out Apple for improving cross-device messaging
Alibaba: Shareholders SoftBank will settle in advance for advanced payment in advance involving a maximum of about 242 million ADR
It is also the collapse of the mine card: NVIDIA graphics card plummeted, AMD graphics card increases against the trend
Gaming phones also have optical shake protection: a 50-megapixel large-background master camera on the Rescuer Y70
Musk's eyes! Lei Jun released a full -size humanoid robot Xiaomi self -developed strength explosion table
Biden signed a chip and scientific bill, a video call of WeChat iOS internal test suspension window, the advanced CPU caused Win11 to be difficult to use, Huawei new machines enter...
The most popular news this week
Economic Daily: US Chip Act will not stop China Chip!
Because of violating consumer law, Google was fined about 288 million yuan
Global e-commerce revenues may shrink for the first time
Apple's M2 processor is coming down: The iPad Pro 2022 is scheduled to ship in October
Are the suitcases hot? Meteorologist alert, the climate crisis is here!
Has been taken 4 pins, the new crown vaccine, the American Pfizer CEO is positive: taking special effects medicine
A fire broke out in Nintendo Japan headquarters, and the news said that it was caused by the charging electronic device
YouTube has been revealed as early as this fall to launch an online store to support streaming platform subscriptions
Video game company Unity rejected AppLovin's $17.5 billion takeover offer
Huawei Mate 50 series first emergency mode: can make phone calls and scan when the battery is exhausted