Low power processor design has been applied to arm with more than 180 billion chips. Two years ago, it began to explore the edge, cloud and 5g markets, and released the neoverse e series processor. Arm said at that time that the performance of this series of processors would achieve 30% per year by 2021. In 2019, the first generation of neoverse N1 will be launched, with a performance improvement of 60%, which is twice the target proposed in 2018. 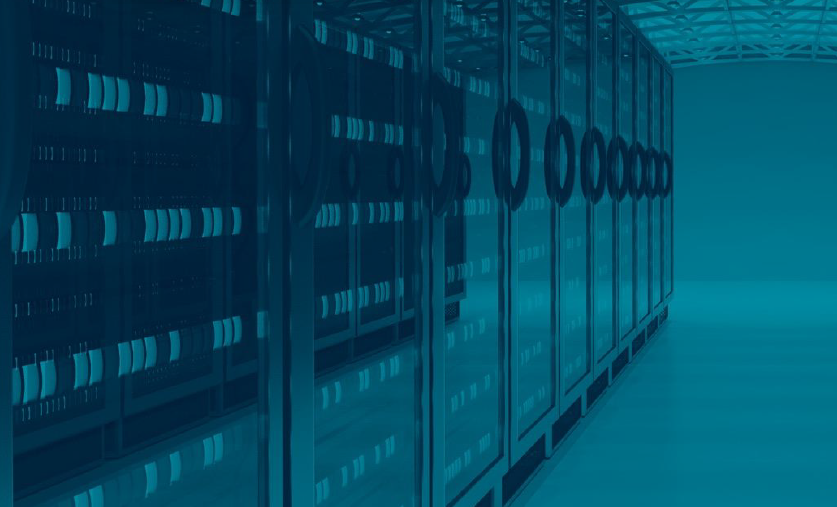 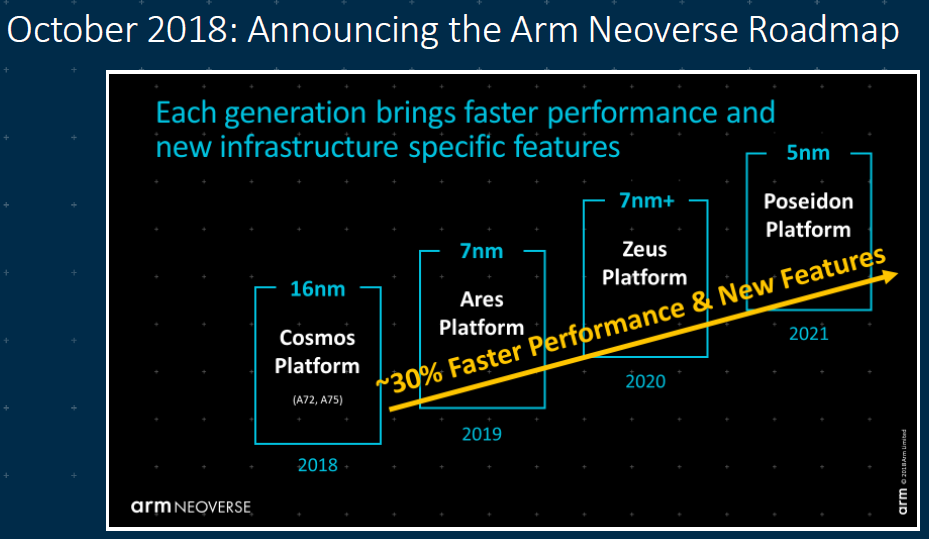 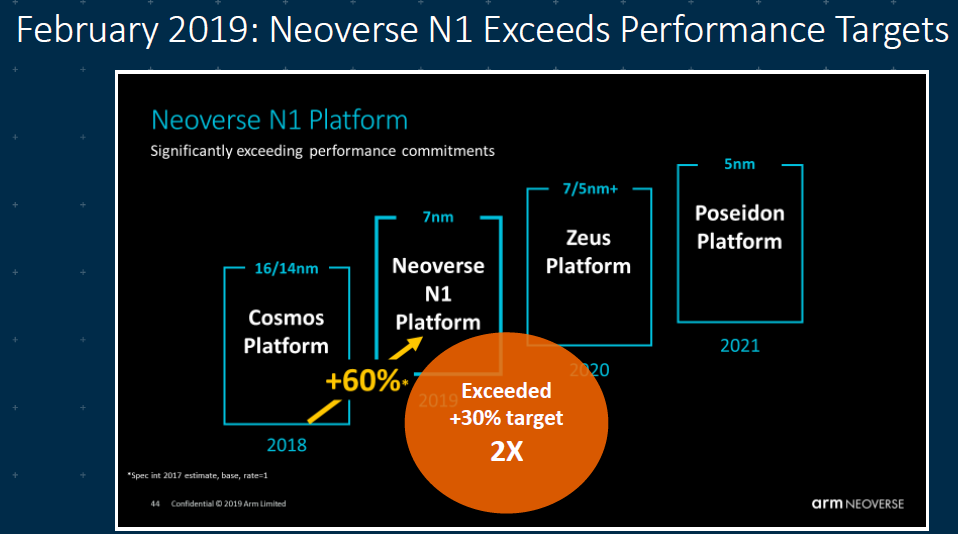 Does arm rely on single core and multi-core competition of X86 in high-performance computing market?

Two years after the launch of neoverse series, it has three series, e series, n series and V series.Neoverse n series considers performance, power and area (PPA) at the same time, and is good at scalability; V series aims to provide the best performance and consumes more area and power; E series focuses on efficiency and optimizes power consumption and area reduction.

As a newly released product series, V series is more performance oriented. Therefore, neoverse V1 is designed for 7Nm and 5nm, and is the first to support scalable vector extensions (SVE). Based on the software programming model of unknown width vector unit, SVE can execute SIMD integers, bfload16 and floating-point instructions.

At the same time, V1 also supports the connection of pci5.0, ddr5, hbm2e and ccix 1.0, which can realize bidirectional consistent communication between chips between slots and small chips in package.

Based on ARM architecture, Japan's fugaku supercomputer uses 512 bit SVE technology. It is not only the fastest supercomputing in the world, but also the fourth supercomputer on the latest green500 list.

Another new product released by arm this week is the 5nm process design, which supports PCIe 5.0 and ddr5, and is further expanded by supporting hbm3 for high bandwidth memory and ccix 2.0 and CXL 2.0 for architectures. It can support the design from 8 cores, 20W to 192 cores, 350W, and is a highly scalable platform across the cloud, smart NICs, enterprise network and edge devices with limited power consumption. 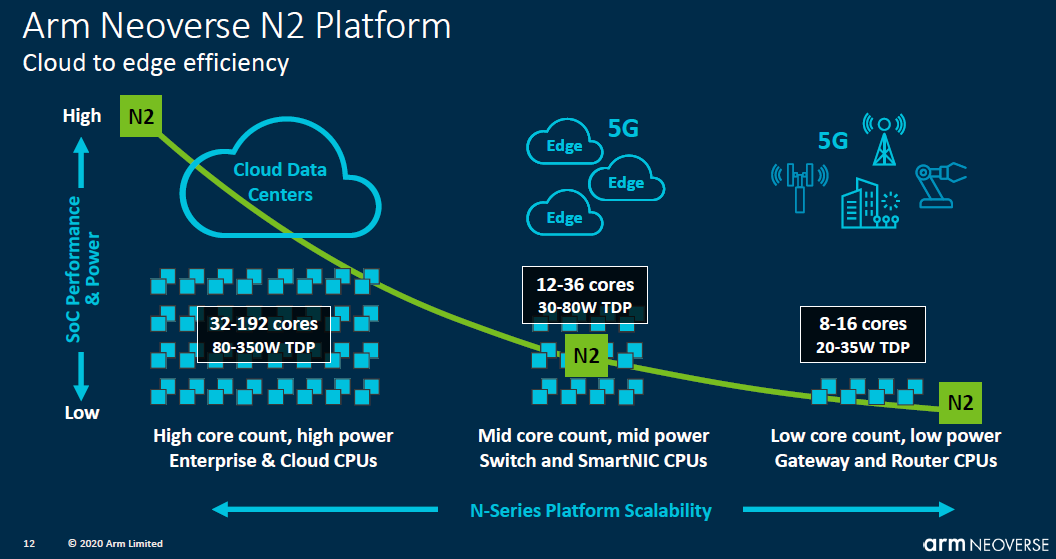 More details about the new V1 and N2 releases will be announced later, Chris Bergey said. Now we only know that V1 and N2 have improved the single core performance by more than 50% and 40% compared with the previous generation N1. 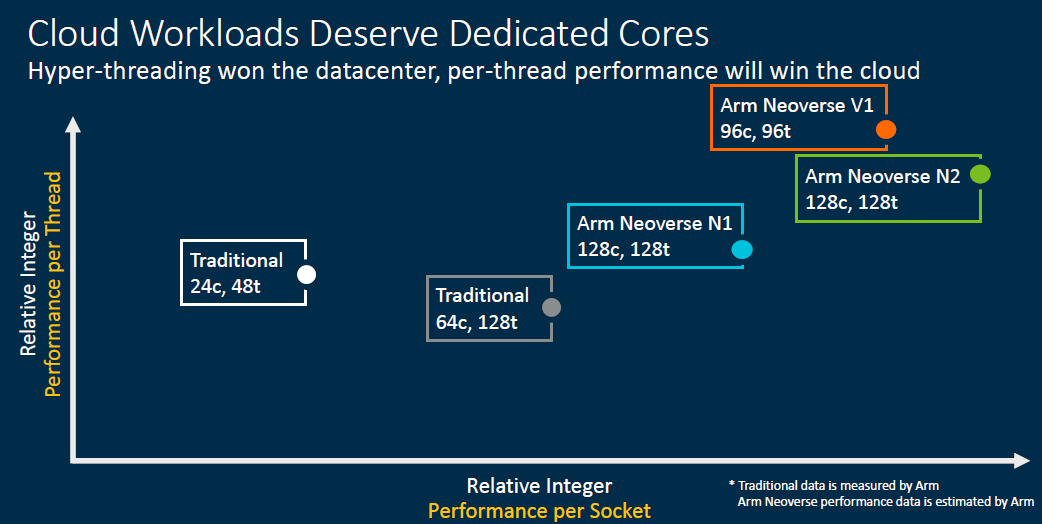 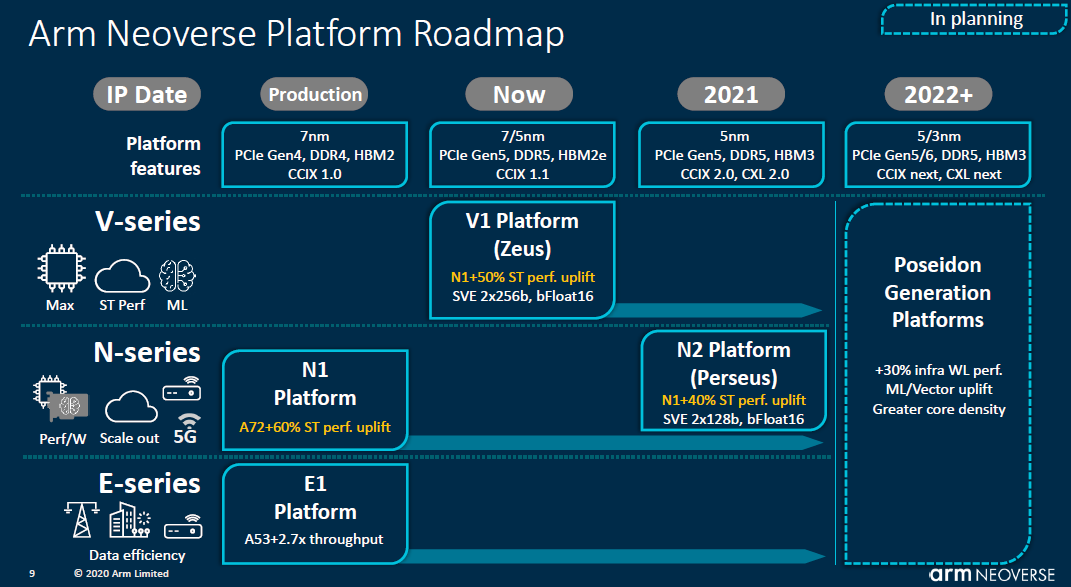 Neoverse V1 can be seen as a peer design of cortex-x1, and the two flagship CPUs may share many very large core architectures. Cortex-x1, a new product released in May this year, also pursues maximum performance.

Neoverse N2 is special because it represents the design of the next generation cortex-a, which is the follow-up product of A78 released in the same period with cortex-x1. This may be the key reason why the technical details of neoverse N2 can not be released yet. In order to more intuitively explain the relationship between cortex and neoverse product line, a picture made by foreign media AnandTech can help you understand it better. 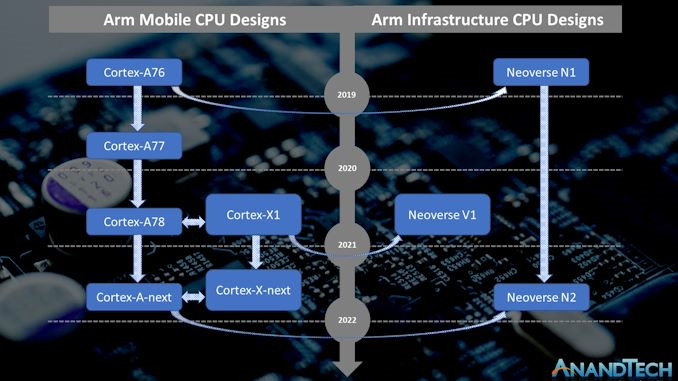 In terms of software ecology, the key task of arm is the chip level interface of arm, which provides an opportunity to design system level solutions. Arm invests in ccix and CXL to provide better interconnection technology, provide scalable switching network and support a large number of processor cores.

In addition, arm project Cassini hopes to be friendly to software developers through standards, platform security and reference implementation, so that industry partners can deploy and use the arm based platform.

In terms of infrastructure software including operating system and hypervisor support, Xen, KVM, docker container and more and more kubernetes have announced support for ARM architecture. Many open source projects initially driven by arm are becoming autonomous and commercial ISV applications are evolving.

But arm still has a long way to go to really shake x86's position in the cloud CPU market. 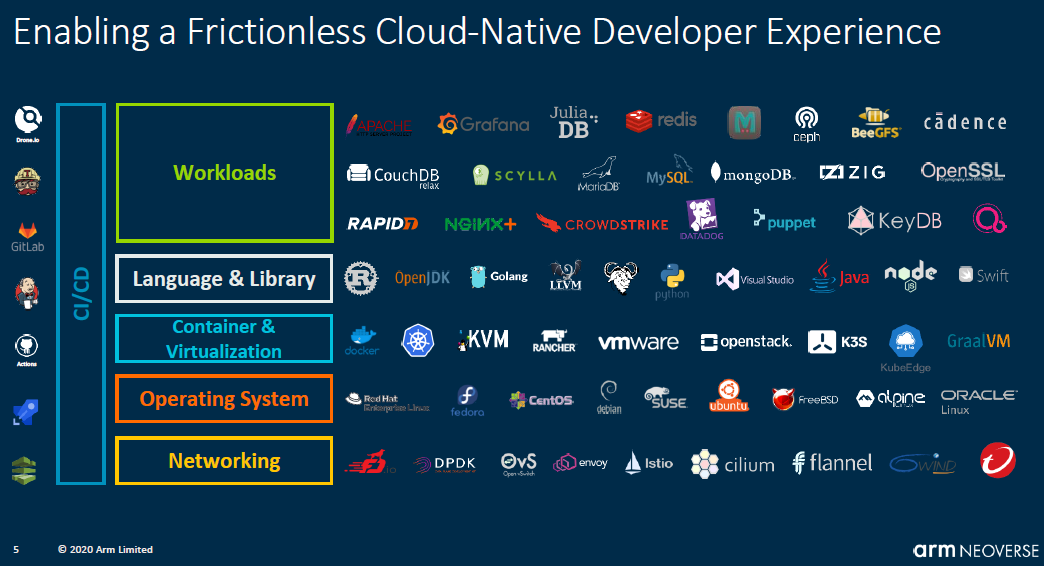 Of course, neoverse is for markets from the cloud to the edge.Chris Bergey also pointed out that arm's opportunities actually include the support of cloud native software, as well as helping customers overcome the challenges brought by Moore's law slowdown through customization.

Some people in the industry believe that the key to arm's success in the cloud market is to meet the customized needs of large Internet companies and cloud service providers.

Can arm architecture chip cover from terminal to edge to cloud in the future? Now it seems that in addition to the efforts of arm, whether or not it will eventually be acquired by NVIDIA has become a key factor.

Related news
ARM released a new architecture CPU, GPU and AI core, Huawei will miss
Chaos coming? If NVIDIA acquires arm
NVIDIA spent a lot of money to buy arm, semiconductor industry will change?
NVIDIA's $40 billion arm: what on earth?
Single core performance soared by more than 50%! Arm's ambition is obvious
Single thread performance improved by more than 50% arm new server CPU depends on single core?
Arm releases new neuron processor: single core performance rises 50%
Arm neoverse V1 new computing platform released: performance leap 4 times!
Hot news this week
A small plane in the US has crashed into a 30-metre high voltage power line and got stuck: 80,000 people affected
Can recording others' wechat chat records be used as evidence? The Beijing Internet Court has an answer
Alibaba launched a new cross-border e-commerce platform in Spain, aiming to operate independently in the middle and high-end market
It's not just Huawei! Beidou has penetrated more than 20 industries and applied more than 15.5 million products
When pure water is used in China team to solve the problem of seawater hydrogen production: it is expected to become an original industry
A Tesla crashed into two cars in Taizhou, Zhejiang province, killing two and injuring one, police said
Breaking the spell of "Android 3 year must card", the new Breguet mobile phone will be sold for the first time tomorrow: from RMB3499
The appearance of Xiaomi's mini console is revealed for the first time: an all-metal body with a strong apple smell
Be careful with your phone for a long time! The aunt played with her mobile phone so much that her fingers got stuck
Google's Project Zero team accuses vendors of slacking after ARM GPU bug exposes Android upgrade woes
The most popular news this week
Why is the Apple Pencil 2 not supported? iFixit takes apart the iPad 10 to find out
Zte's experience proves that there is no way out of appeasement and peace can only be fought out
China's growing presence in the global high-tech sector is unacceptable to the US
Us to investigate Lapsus$hack, Microsoft, Nvidia and others were breached
From January to October this year, the number of global travel app downloads approached 2 billion, with China's Amap, Baidu Map and Railway 12306 taking the top three places
With the acquisition of Pulse, Mozilla will develop a new approach to machine learning
Did the United States achieve its goal? More than 40 suppliers went to the United States with TSMC
Microsoft may not be able to offer its Microsoft 365 service in German schools after two years of efforts failed
A record $50 million in compensation! In the final judgment of the dispute over the infringement of Minecraft by Mini-World, NetEase won the lawsuit
Manufacturers like Samsung and Xiaomi have been affected. Google has revealed a dangerous flaw that threatens millions of Android devices