A netizen yesterday revealed that Huawei Songshan Lake laboratory in Dongguan suddenly caught fire, the fire is not small, the scene smoke billowing.

Afterwards, the Guangdong Dongguan fire rescue detachment officially confirmed the above news, but the official statement mentioned that only Huawei a project under construction in Songshan Lake was on fire. The building had nothing to do with the laboratory and was being renovated and built. Not put into use.

Now, the latest situation given by Dongguan Fire Rescue Detachment shows that after a comprehensive search and cleaning by fire rescue personnel, three dead people were found in the fire building, which was verified as employees of the property management company in the park.

Some media learned from the Information Office of Dongguan Municipal People's government that on September 25, a fire broke out at a construction site of Huawei Technology Co., Ltd., located in Alishan Road, Songshan Lake high tech Zone, Dongguan City. The fire building was a steel frame structure, which was not officially put into use.

The following is the official announcement:

After a comprehensive search and cleaning by fire rescue personnel, it was found that there were three dead in the fire building, which were verified to be employees of the park property management company.

Accident cause investigation and subsequent disposal are still under way. 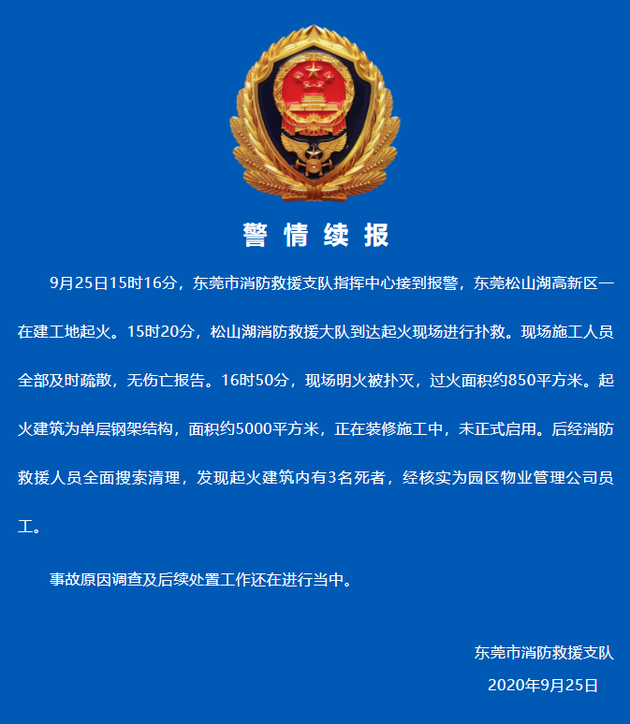