The United States announced sanctions against SMIC? SMIC: no such official information has been received

Original title: US sanctions against SMIC? At present, it has not been listed in the entity list. There are four doubtful points in the exposed documents! An American equipment manufacturer: no notice yet!

According to the news on September 26, Beijing time, many wechat groups in the semiconductor industry are spreadingA document suspected to have been issued by the U.S. Department of Commerce's Bureau of industry and security shows that certain products exported to SMIC and its subsidiaries and joint ventures will be subject to export control. The document was issued on September 25, U.S. local time. 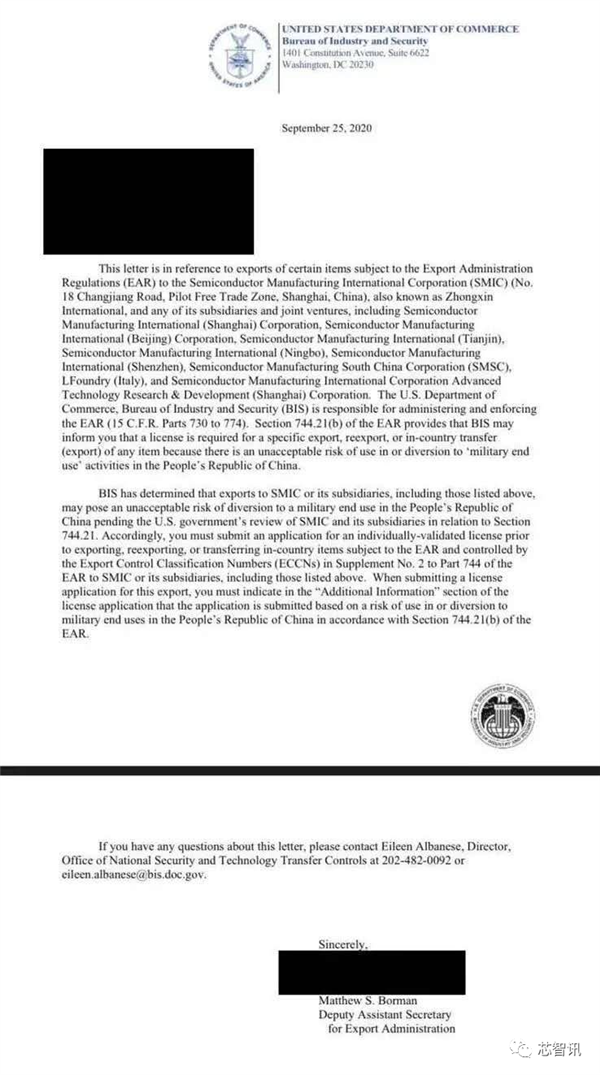 At present, the authenticity of this document needs to be confirmed! SMIC international has not responded to this.

In this regard, we contacted the relevant person of a US semiconductor equipment manufacturer for the first time,At present, we have not received the relevant notice. We need to wait for the information from the US headquarters.

In addition, the other party also raised several questions about the document circulated on the Internet

secondly,L foundry has long been sold by SMICIt's strange to be on the list;

Third, if SMIC is really sanctioned, then in this listSMIC north and SMIC Shaoxing should also be among them;

fourth, firstIn general, the U.S. Department of Commerce bans will give a buffer period to protect the interests of American manufacturers, and rarely take effect immediatelyBut not in this document.

Note: in July 2016, SMIC international acquired 70% of the shares of lfoundry, which is mainly engaged in the development and production of camera chips;

In addition, marsica and ISAR each own 15% of lfoundry. In March 2019, SMIC announced the sale of all its shares in lfoundry. According to the announcement, the buyer of this transaction is Jiangsu Zhongke JunXin Technology Co., Ltd., and the transaction volume is 112816089 US dollars.

Therefore, there are still many doubts about the authenticity of this document.

But before further confirmation, some media outlets said,

However, if you look at the contents of the document carefully, it is not difficult to find out,The United States did not formally sanction SMIC. There is no mention of SMIC's inclusion in the entity list. At the same time, the website of the U.S. Department of Commerce has not published a notice that SMIC will be included in the list of entities. 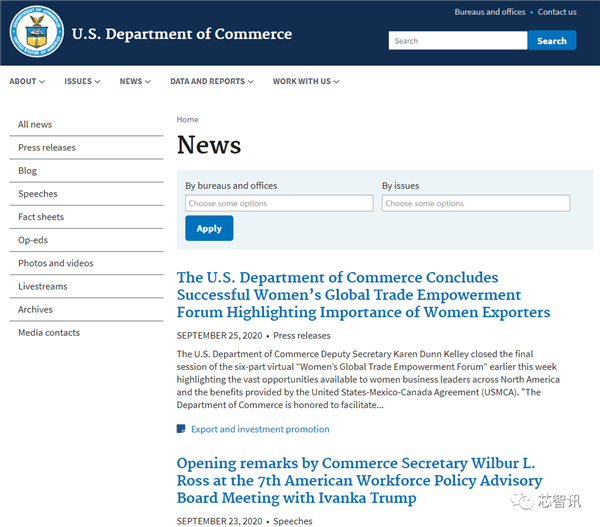 The website of the U.S. Department of commerce also did not publish an announcement that SMIC was included in the entity list

This document only shows that the US government is investigating SMIC, and that before the results of the investigation, American enterprises need to apply for licenses before exporting to SMIC and its subsidiaries. It is not to say that export to SMIC is prohibited.

The U.S. Department of Commerce has imposed temporary restrictions on SMIC and its subsidiaries on the grounds that,

In response, SMIC also issued a statement in response to the statement,

Here's a key point:Over the years, the U.S. Department of Commerce has issued several important export licenses for the equipment purchased by SMIC international.

That is to say, before that, some semiconductor equipment exported by American equipment manufacturers to SMIC itself needed export license. Before that, SMIC had been successfully licensed.

Therefore, even if this document is true, the US semiconductor equipment manufacturers should still be able to obtain the export license to SMIC before the US investigation results are released and SMIC is officially sanctioned.

Of course, whether the United States will eventually sanction SMIC still needs to wait for the US side to further decide.

however,SMIC has always paid great attention to its compliance. After Huawei was further sanctioned, SMIC said in its prospectus that it would comply with the relevant provisions, and might not be able to continue to use American equipment to contract for a customer (Huawei). Of course, SMIC has applied to the United States for permission.

Judging from the process, SMIC has produced 14 nm, but the yield is still climbing, N 1 the process begins to import into the client, but it is still a long time before mass production. At present, TSMC's 5 nm process has been mass-produced.

From the perspective of equipment side, SMIC also relies heavily on American semiconductor equipment. In order to accelerate the production of 14nm, SMIC announced on January 24 this year that SMIC had issued a series of purchase orders for Applied Materials for machinery and equipment from February 2019 to January 2020 in accordance with the commercial terms agreement, at a total cost of about US $620 million.

Subsequently, on February 18, SMIC announced that the company issued a series of purchase orders to Fanlin group for machinery and equipment during the 12-month period from March 12, 2019 to February 17, 2020, at a total cost of US $601 million (about RMB 4.2 billion).

In other words,The U.S. semiconductor equipment manufacturers will suffer no small losses from sanctions against SMIC.

A short time ago, the International Semiconductor Industry Association (SEMI) wrote to US Commerce Secretary Ross that US semiconductor equipment and materials have $5 billion in annual revenue from SMIC, which will make it more difficult for U.S. companies to supply the former and thus affect the global market share of American semiconductor companies. If SMIC is included

In addition, it is worth noting that the United States has upgraded the export ban on Huawei twice in a row after the United States listed Huawei in the entity list. However, Intel and AMD have confirmed that they have obtained the license to supply to China. To some extent, this also shows that,The U.S. government is not completely indifferent to the interests of American semiconductor manufacturers.

And, of course, we can't completely trust America 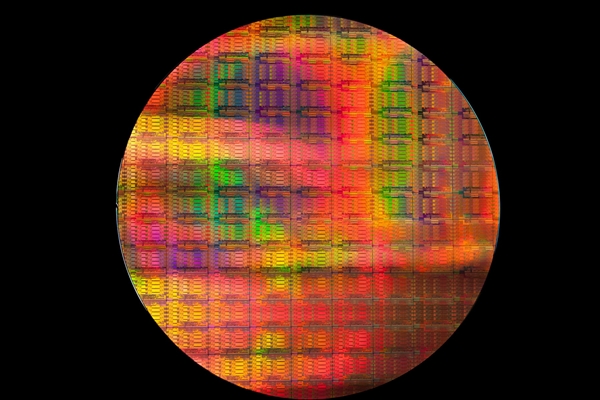 Listed by the United States

According to the financial times, there are media reports today that the United States will issue a ban on SMIC.

According to a copy of a letter seen in the Financial Times, the U.S. Department of Commerce said on Friday believed exports to SMIC would be diverted 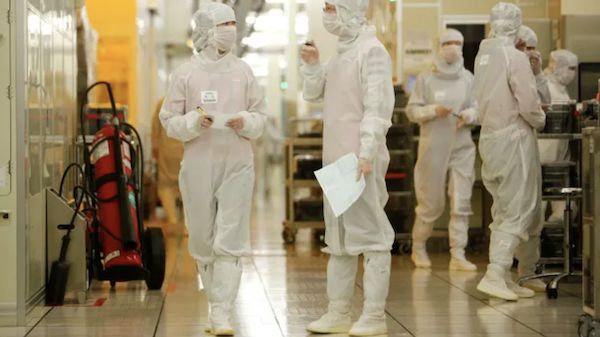 However, SMIC told SciDev.Net that it would continue to work with the U.S. Department of Commerce and reiterated,

At the same time, SMIC also stressed that the company has not received such official information.

It is worth noting that the content of the ban on SMIC in the current report has not been confirmed, and no relevant documents have been published on the website of the US Department of Commerce. Therefore, the authenticity of the news remains to be observed.

Related news
SMIC denied that the US withdrawal from the market is related to Huawei.
It is said that the United States is considering adding SMIC to the entity list! What about this?
The United States announced sanctions against SMIC? We need to talk about it
The United States announced sanctions against SMIC? SMIC: no such official information has been received
SMIC international confirmed export restrictions by the United States! How much impact? How to deal with it?
How much is SMIC's confirmation affected by US export restrictions? How to deal with it?
SMIC confirmed to be subject to us export control measures to deal with potential impact
@666 Join illuminati Kingdom in United Kingdom +27839387284
Hot news this week
***
Apple's second special event in autumn 2020
IPhone 12 released tonight: Apple's official website in China has been maintained
IPhone 12 Mini secret castration: does not support dual card!
Apple iPhone 12 is crazy about environmental protection without charger and headset: it's not about saving money
The reason and strategy of Tencent investing in retail for the first time
IPhone 12 series battery parameters exposure! The best is pro max
After 85, Peking University Graduates developed wechat "powder cleaning" software for profit related cases of 8million
Return to high pass 5g baseband! Will the iPhone 12 signal get better
Pre order stock of some iPhone 12 Pro models is out of stock and delivery has been delayed to November
The most popular news this week
Another folding flagship besides Samsung and Huawei! Ruoyu flexpai 2 Evaluation: only one set under 10000 yuan
Huawei shengteng 910: the strongest AI chip kills NVIDIA / Google
DxOMark added mobile phone screen test, announced new camera evaluation index
Xiaomi folding screen new machine design patent exposure similar to Samsung Galaxy fold
Youku upgrade big screen "cool meow family strategy" release terminal hardware Tmall smart screen magic box
More than 150000 iPhones were ordered in China in three days, nearly 43% chose iPhone 12
Sk Hynix's US $9 billion acquisition of Intel business
Dialogue with Cheng Wu: where will Tencent pictures, Xinli and Yuewen film and television go?
Amd Ruilong 55600x run point exposure: 65 watts kill 125 watts
Tmall's official double 11 is 3 days more than in previous years: the balance will be paid on November 1 and the goods will be received 10 days in advance