We media big V apologized to Xiaomi: wrote a lot of negative Xiaomi for Bo eyeball

On the Internet, Xiaomi belongs to its own traffic. They are probably the most popular brand in the field of mobile phones or electronic products. Some people like it, while others naturally hope that black millet can get traffic. But today, there is a 20000 fans of digital big V had to apologize.

Weibo CertificationBig V @ asked for the bottom line today, and his number of fans is about 2WIt's not very famous, so it doesn't seem to be very popular on the Internet.

But from the apology letter, it is obvious that the official account of millet law department has been launched. This letter of apology is very sincere. When it comes to subsidizing family, it began to do the media since November 2019. It has registered in micro-blog, Zhi Yu, penguin, 100 family, UC big fish, WeChat public number and B station.

As a self-media, he learned other technologies and self-media experiencesMust grasp the hot spot, and Xiaomi is a very good hot spot, many readers like Xiaomi's negative content, so the reading will be good, the income will be good.

Therefore, he claimed that he was influenced by this wrong idea and wrote a lot of negative content about Xiaomi. In addition to being pushed by the platform, there were also a large number of forwarding and comments from unknown people.

In a word, asking for the bottom line and confessing to what he did in the past misled the public's cognition, violated the legitimate rights and interests of Xiaomi company, damaged the reputation of Xiaomi company, and destroyed the normal Internet public opinion environment. Sorry for my previous behavior, Xiaomi company and readers affected by my content!

Not only that, he also said that he was willing to use his income to compensate Xiaomi's loss, and once again sincerely apologized, imploring Xiaomi company and readers affected by my personal wrong views to forgive me! 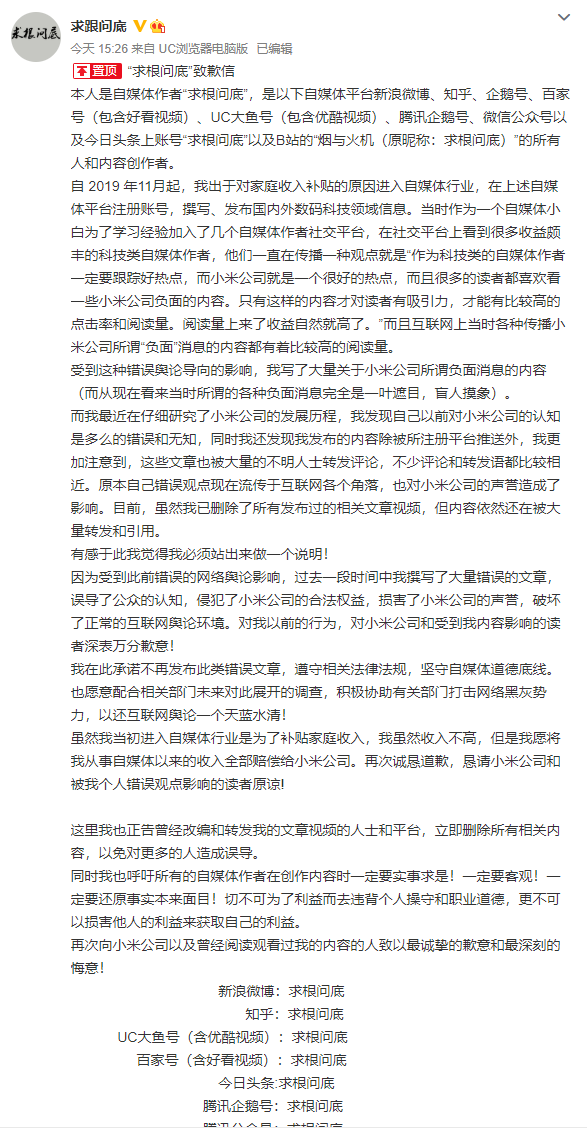 Related news
Xiaomi Youpin crowdfunding put on the shelf tender skin beauty instrument: 4 minutes each time to create a small V face
Weibo big V accuses SF: Sony's 10000 yuan TV is scrapped in the mail, but the insured price is not compensated
We media big V apologized to Xiaomi: wrote a lot of negative Xiaomi for Bo eyeball
Wechat video, difficult to produce big V
We are the best producer of authentic counterfeit Banknotes,
Xiaomi: Yang Qian became the spokesperson of Xiaomi Civi
Xiaomi will hold a special general meeting of shareholders to approve theXiaomi EV Talent Incentive Program
Hot news this week
Capital does not love SAIC, "flying" subsidiary, Jet Hydrogen Technology intends to go to science and technology board
Wechat: It will not be possible to create an account for controlling comments and Revelations related to star artists
WeChat Alipay personal collection code will not be used for business collection, digital currency sector rises
Big bang! Wechat, Alipay personal payment code can not be used for business payment, what is the impact on you?
1.6 billion yuan too cheap? BMW's $1.6 billion takeover of Brilliance's Factory in China has been called off
Interpretation of the more than Q3 financial results: dead agriculture shrink self-employment, transformed into "more farmers"? | the planet of wealth
From March 1 next year, the personal payment code of wechat Alipay will not be used for business payment
Is it the brother who 'cuts' me? The blue-moon issuer has cut jobs, with some employees saying the year-end bonus won't be awarded
Exclusive | New Oriental new Progress: in the United States to open Chinese line classes subsidiary to undertake the transformation
European Telecom I hope that the US science and technology giants bear the cost of network construction
The most popular news this week
Apple will mark the end of the iPhone 6 Plus as a classic generation of outdated products
Market research firm: Global smartphone shipments in the third quarter fell 6 percent year on year, Xiaomi third
Qualcomm releases the first generation of Snapdragon G3x game platform for mobile games, mixed realistic design
Netease cloud music listed on the first day, now falling 0.68% reported HK $ 203.6
Station B bought a stake in game developer Xinguang Liumei, whose products include Warring States Period
Sohu layout knowledge live
Intel discrete graphics name, performance exposure: chasing NVIDIA two years ago
Xiaomi's first 4K new product hits! It is highly recommended
Mobile phone storage is really not the bigger the better 18GB ordinary people can not use
The next generation of OS Stable Edition is ready! Xiaomi 12 is perfect