Moreover, as an important part of Huawei whole scene ecology, HMS application ecology has become an important link between developers and users after 4 years of rapid development. HMS Core 5.0 release, quickly completed the global developer needs 11 capabilities. Huawei consumer business HMS Core platform Minister Wang Yue said at the conference: HMS Core is to open up the ability of the Huawei, so that developers can use. HMS Core can provide motivation for developers to develop efficiently, allowing developers to focus on application innovation. HMS Core 5.0, especially in AI areas

The list of Huawei concept related beneficiary shares is as follows: 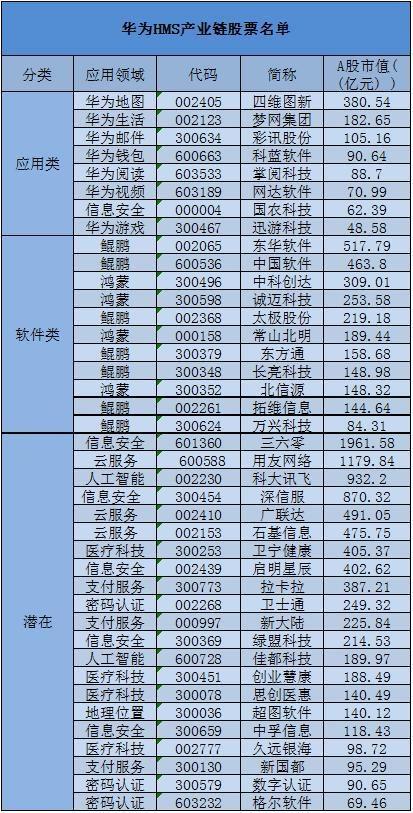 Dongxing Securities said that GMS service is an important source of revenue from Google's advertising business: according to Google's annual report in 2019, GMS service has contributed more than $40 billion in revenue, while GMS monthly active users have reached 2.5 billion. HMS service has huge growth space in the future and broad space for income generation.

CITIC Securities pointed out that in terms of breadth, the number of developers and ecological applications of HMS is greatly improved. At present, the number of HMS developers is 1.3 million, accounting for only about 10% of global developers. The number of 55000 applications is also significantly behind the 2.8 million applications of Google play. How important GMS is to Google, how urgent is HMS to Huawei. There is a big mismatch between Huawei's software level and its current industry status. Developing HMS to strengthen the ecological strength of software will be the key for Huawei to improve the service capability of the overall software and hardware industry chain.

On the whole, referring to the development trend and profitability of Google GMS, with the increase of HMS developers and ecological applications, Huawei stores have great growth potential, and companies within HMS ecology will definitely benefit.