Survey: about a quarter of American adults get news through YouTube

According to foreign media reports,About a quarter (26%) of American adults say they get news by watching YouTube videos, according to a new Pew Research Center study.The study examined the growing influence of Google's video platform on news dissemination and consumption in the United States.

The study found that established news organizations no longer completely control the news that Americans watch, because only one fifth (23%) of YouTube users said they "regularly" get news information from channels associated with established news organizations. The same proportion of respondents said they get news "often" from independent channels.

The independent channels in this study are defined as those without clear external connections. At the same time, news agency channels are channels associated with external news organizations such as CNN or Fox News.

Pew found that these two different types of news channels were common, with 49% of popular news channels affiliated to news organizations and 42% not.

A small proportion (9%) came from other organizations that published news, including government agencies, research institutions and propaganda agencies. 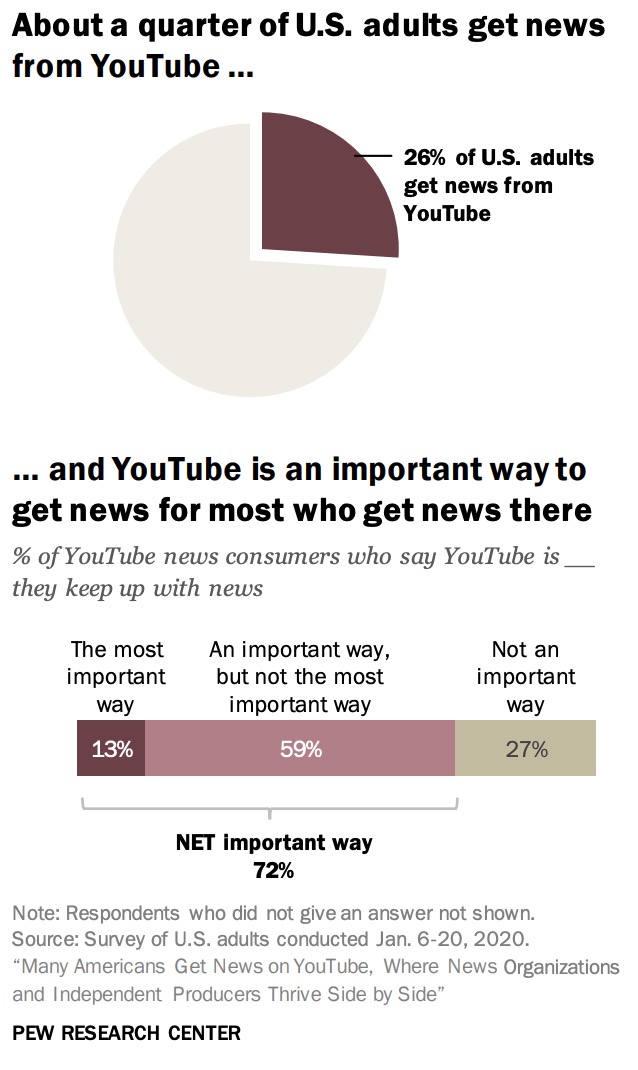 To determine the findings, the Pew Research Center conducted a representative panel survey of 12638 American adults from January 6 to January 20, 2020.

The study found that most Americans (72 percent) thought YouTube was their most important way to get news (59 percent) or the most important way (13 percent). Most also said they didn't think there was a big problem getting news from the site, but they did express some modest concerns about misinformation, political bias, YouTube's repeal policy and censorship.

The second part of the study includes the content analysis of 377 most popular YouTube news channels in November 2019, and the analysis of youtube video content published by the 100 channels with the highest median views in December 2019. Pew said the work was done by a combination of human and computational methods.

As a result, more than 40%(44%) of YouTube popular channels can be described as "personality driven" channels, that is, channels are around a person. This could be a journalist hired by an existing news agency or an independent moderator. More often, however, it appears that 70% of independent channels revolve around a person, a video master with a large number of fans. True ,57% of independent channels are driven by YouTube video masters, while only 13% of channels revolve around people who were already public figures before gaining attention on YouTube. 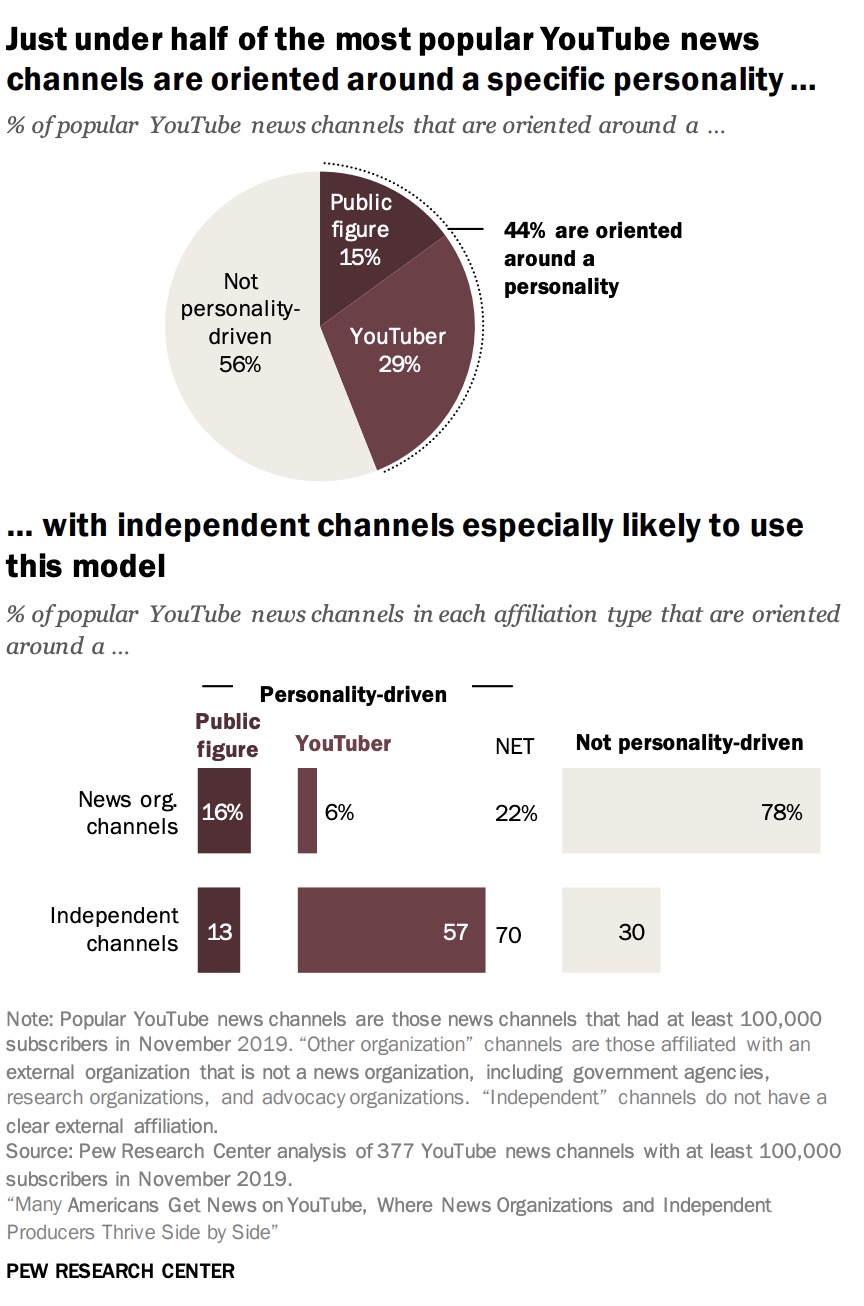 The study also examined other aspects of the YouTube news environment and the themes presented.

According to YouTube news consumers themselves, 66% said watching YouTube news videos helped them better understand current events; 73% thought the videos were roughly accurate and they preferred to watch them carefully (68%).

About half (48%) said they would look for "direct reports" on YouTube - focusing only on meaning, information and facts. At the same time, 51% of respondents said they were mainly looking for opinions and comments.

Answering the open question why YouTube is a unique place to get news, the most common answers are those related to video content-for example, they contain news outside the mainstream or they contain many different views and opinions. 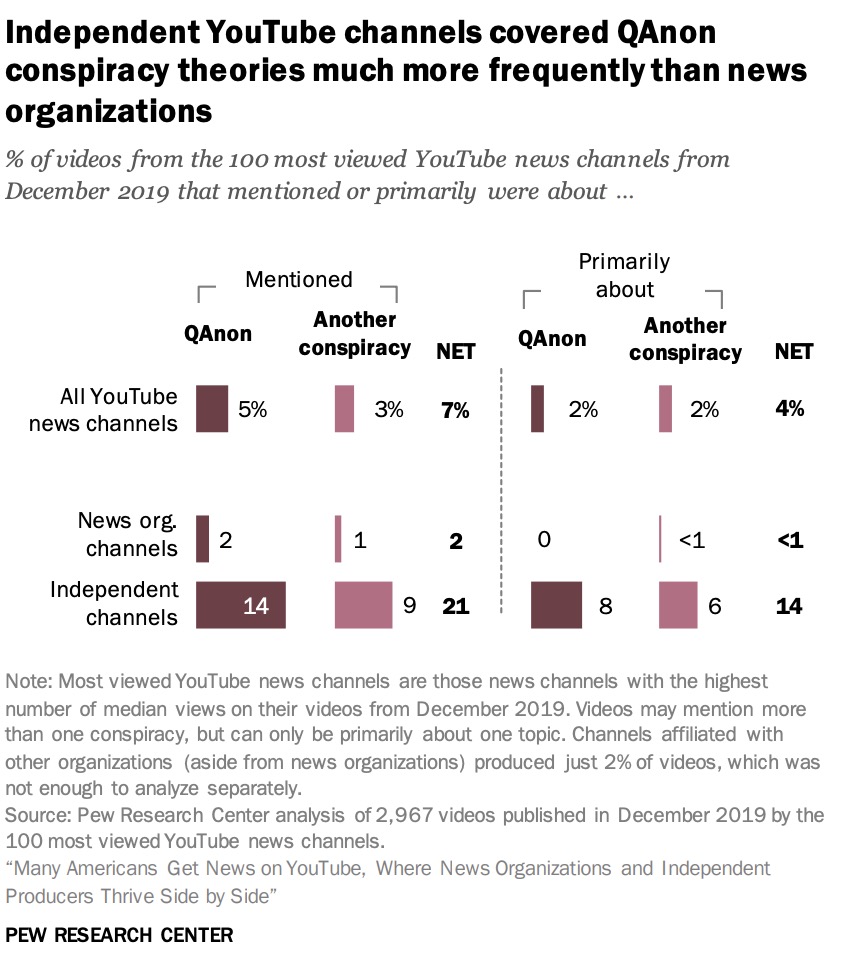 Pew also investigated the frequency of news channels mentioning conspiracy theories, such as those related to qanon, Jeffrey Epstein and the anti VAX movement.

In addition, independent channels are twice as likely as established news organizations to broadcast news in a negative tone.

Overall, of the top 100 YouTube news channels evaluated in December 2019, videos were neither too negative nor too positive (69%). But by type, 37% of the videos on independent channels are negative, compared with 17% for established news organizations. Among them, negative video is also more popular. Among all channels, the average number of negative videos was 184000, that of neutral or mixed tone videos was 172 000, and that of positive videos was only 117000. 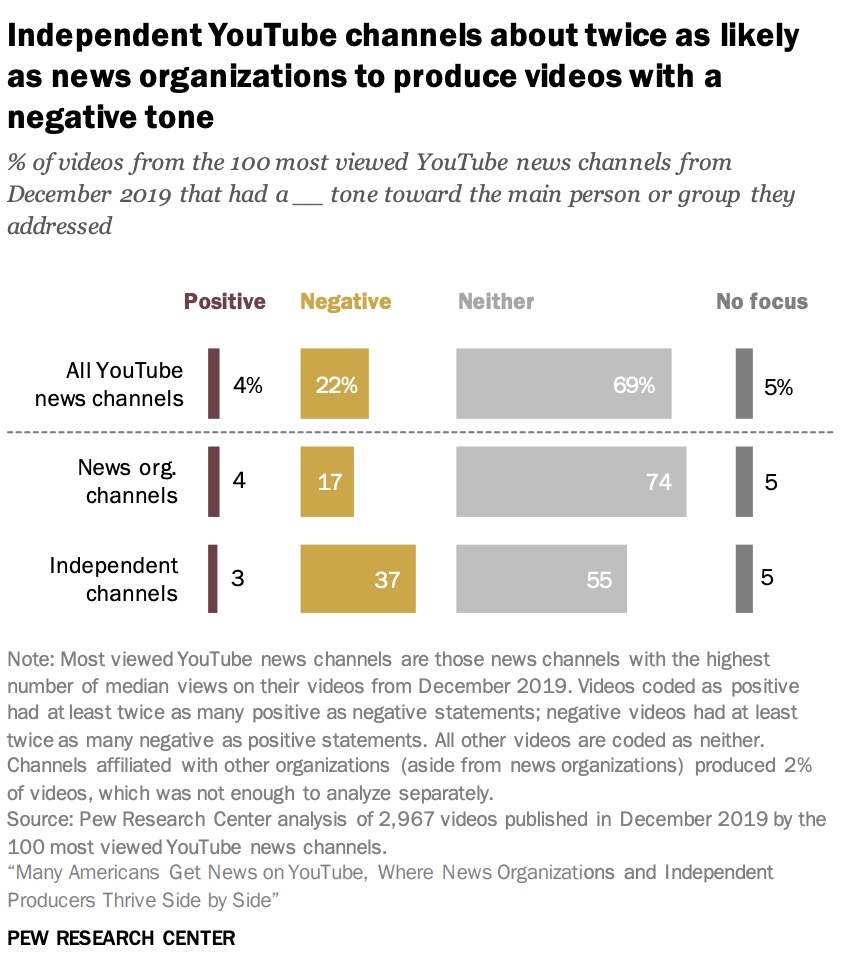 At the same time, videos about the trump government accounted for the largest proportion of visitors in December 2019, with about one-third (36%) of the videos were about impeachment of trump, and 31% were about domestic issues such as gun control, abortion or immigration. The other 9% is related to international affairs. The average number of videos about the trump administration was about 250000, compared with 122000 for other subjects. Among the videos studied, trump was the most common focus, accounting for about 1 / 4 (24%).

By contrast, the videos surrounding the Democratic Party's 2020 presidential primaries accounted for only 12% of the news videos. The study also examined how YouTube news channels present themselves. The study found that the vast majority of people did not explicitly express their political ideology, even if their video content showed that they had ideological tendencies.

Related news
Survey: about a quarter of American adults get news through YouTube
YouTube is planning a full-scale push into professional video
Hot news this week
A small plane in the US has crashed into a 30-metre high voltage power line and got stuck: 80,000 people affected
Can recording others' wechat chat records be used as evidence? The Beijing Internet Court has an answer
Alibaba launched a new cross-border e-commerce platform in Spain, aiming to operate independently in the middle and high-end market
It's not just Huawei! Beidou has penetrated more than 20 industries and applied more than 15.5 million products
When pure water is used in China team to solve the problem of seawater hydrogen production: it is expected to become an original industry
A Tesla crashed into two cars in Taizhou, Zhejiang province, killing two and injuring one, police said
The appearance of Xiaomi's mini console is revealed for the first time: an all-metal body with a strong apple smell
Breaking the spell of "Android 3 year must card", the new Breguet mobile phone will be sold for the first time tomorrow: from RMB3499
Be careful with your phone for a long time! The aunt played with her mobile phone so much that her fingers got stuck
Google's Project Zero team accuses vendors of slacking after ARM GPU bug exposes Android upgrade woes
The most popular news this week
Why is the Apple Pencil 2 not supported? iFixit takes apart the iPad 10 to find out
Zte's experience proves that there is no way out of appeasement and peace can only be fought out
China's growing presence in the global high-tech sector is unacceptable to the US
Us to investigate Lapsus$hack, Microsoft, Nvidia and others were breached
From January to October this year, the number of global travel app downloads approached 2 billion, with China's Amap, Baidu Map and Railway 12306 taking the top three places
With the acquisition of Pulse, Mozilla will develop a new approach to machine learning
Did the United States achieve its goal? More than 40 suppliers went to the United States with TSMC
Microsoft may not be able to offer its Microsoft 365 service in German schools after two years of efforts failed
A record $50 million in compensation! In the final judgment of the dispute over the infringement of Minecraft by Mini-World, NetEase won the lawsuit
Manufacturers like Samsung and Xiaomi have been affected. Google has revealed a dangerous flaw that threatens millions of Android devices