Galaxy Z Fold2 for Samsung 5G： more than "collapsible ", it's almost everything you want

If you're interested in a folding screen phone, it's probably the best one to start with.

After 2020, the number of folding screen mobile phone brands has not increased as many people expected. It is still a game between Samsung, Huawei, Motorola, Rouyu and other manufacturers. Among the above brands, Samsung is undoubtedly the most radical one. In addition to the obvious increase in the number of models on sale, Samsung is also the only manufacturer in the industry that has both horizontal and vertical folding screen mobile phones.

Today, let's talk about the Samsung Galaxy Z fold25g that Samsung just released some time ago. As you may have noticed, the naming rules of the new product have some slight changes compared with the previous generation. The letter Z has been added between galaxy and fold. In fact, it's easy to find the answer when you open the official website of Samsung.

Like the previous generation, Samsung Galaxy Z fold25g continues the unfolding scheme of inward folding. The flex2 and flex2 screens are designed differently from Huawei's external screen to ensure the user's experience. 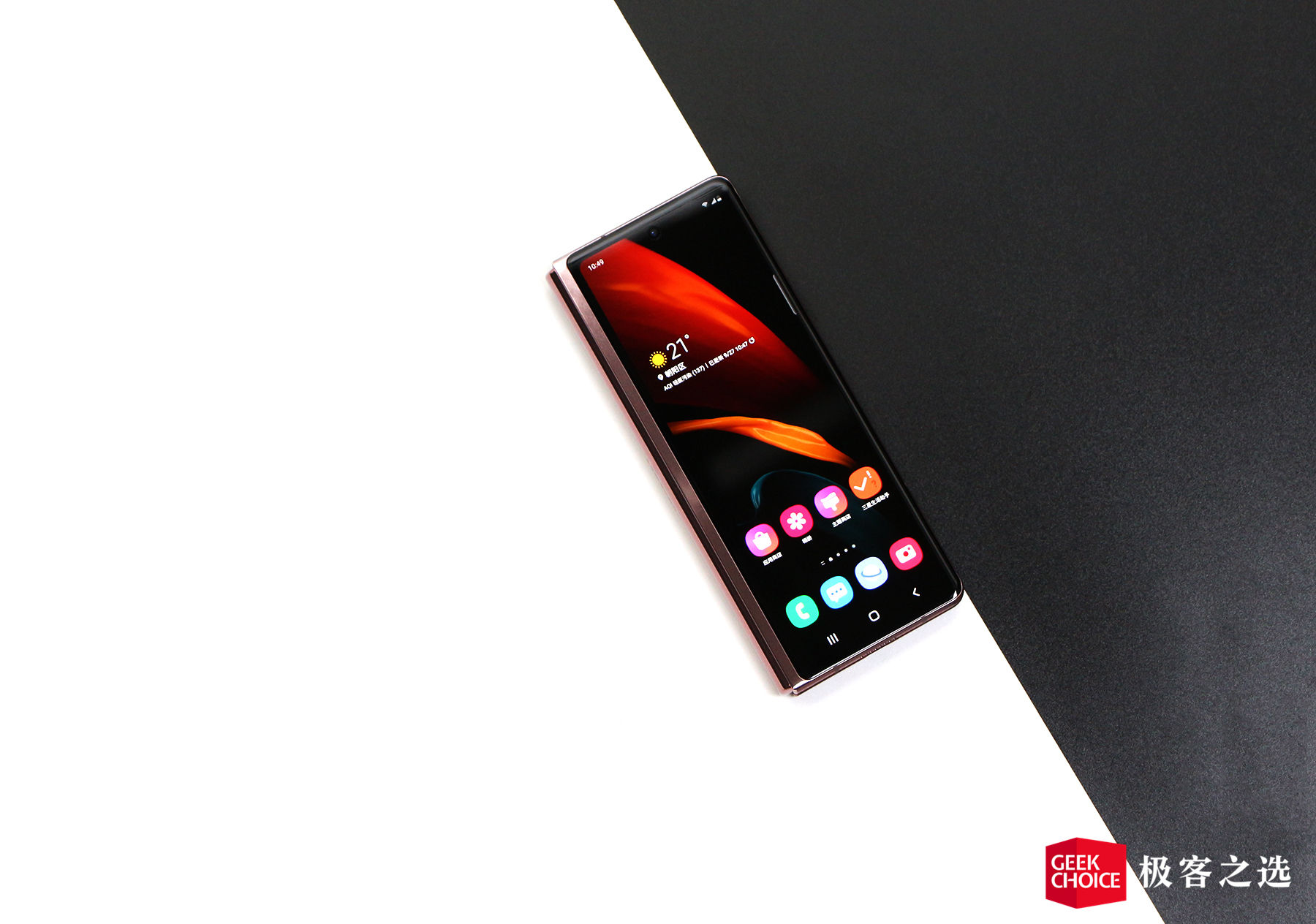 Previously, we mentioned in the evaluation article of Samsung Galaxy fold that when the screen is fully unfolded, its body size is much larger than that of most conventional mobile phones, and it is more suitable for use in fixed scenes. However, when going out, it actually uses more external screens. One of the more embarrassing things is that the external screen of Samsung Galaxy fold is only 4.6 inches, which is not a problem as a "standby", but the main use is almost meaningless. 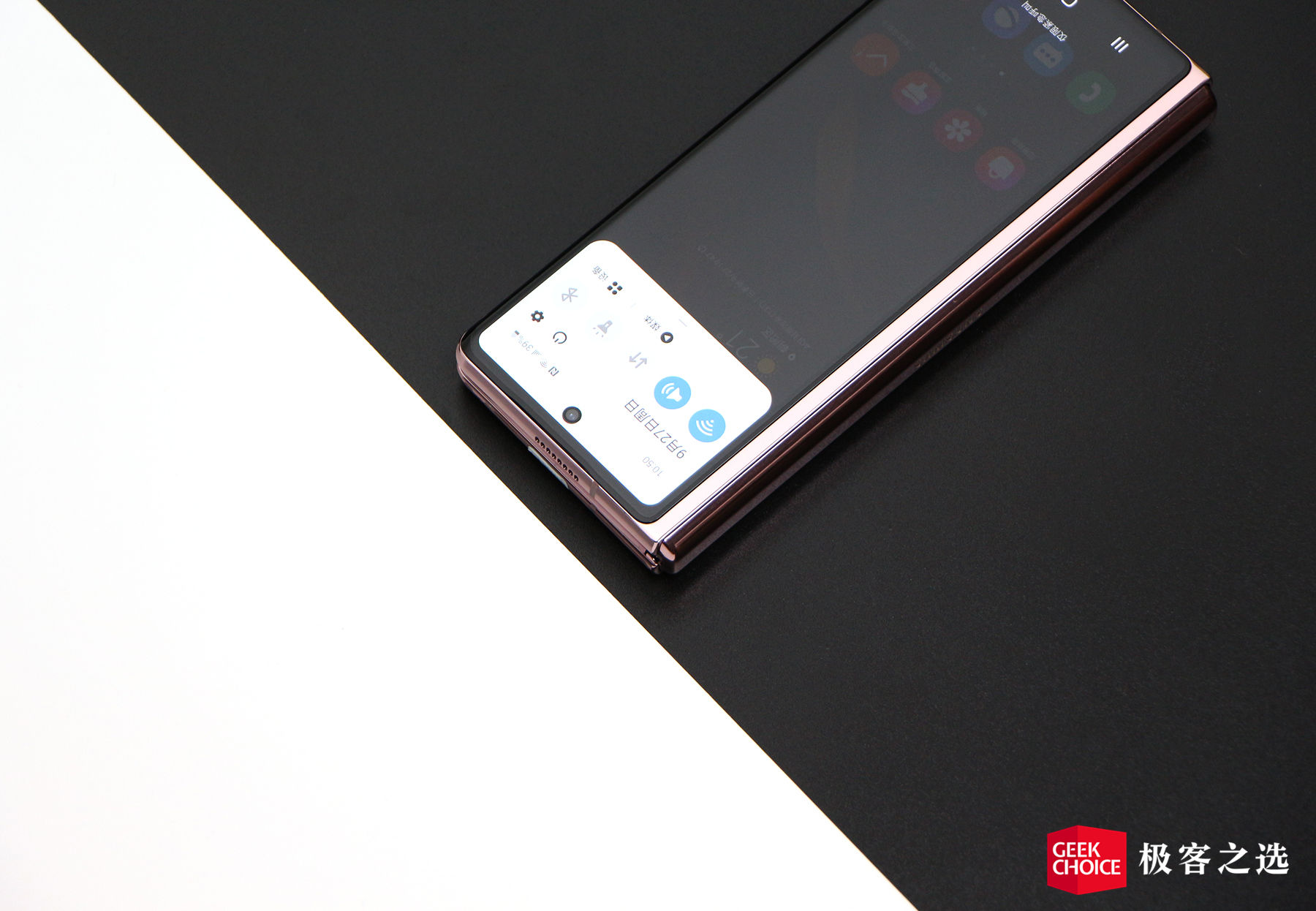 This problem has changed a lot in Samsung Galaxy Z fold25g. This time, Samsung further stressed the practicability of its external screen. The more intuitive improvement is to increase the size of the external screen to 6.2 inches. Combined with the infinity-o full screen design, both the visual perception and usability are better than the previous generation. Of course, due to the problem of proportion, it seems to be "slender". 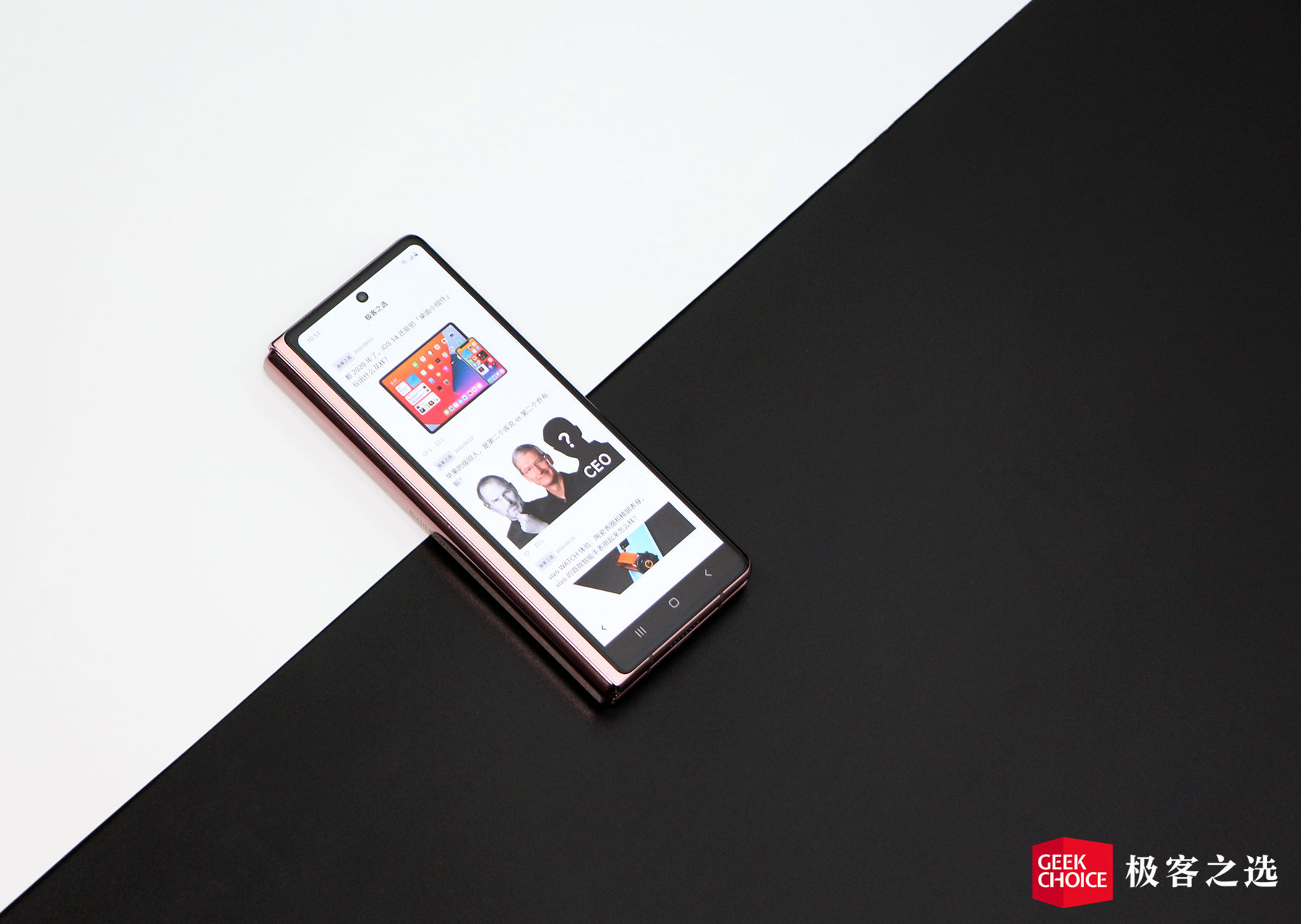 In addition to the above changes that can be seen at a glance, there is an invisible change on the Samsung Galaxy Z fold25g external screen. Friends who have seen the press conference should know that Samsung uses Corning gorilla glass victus on its surface. In other words, although its screen size is much larger than the previous generation, you don't have to worry about its durability. 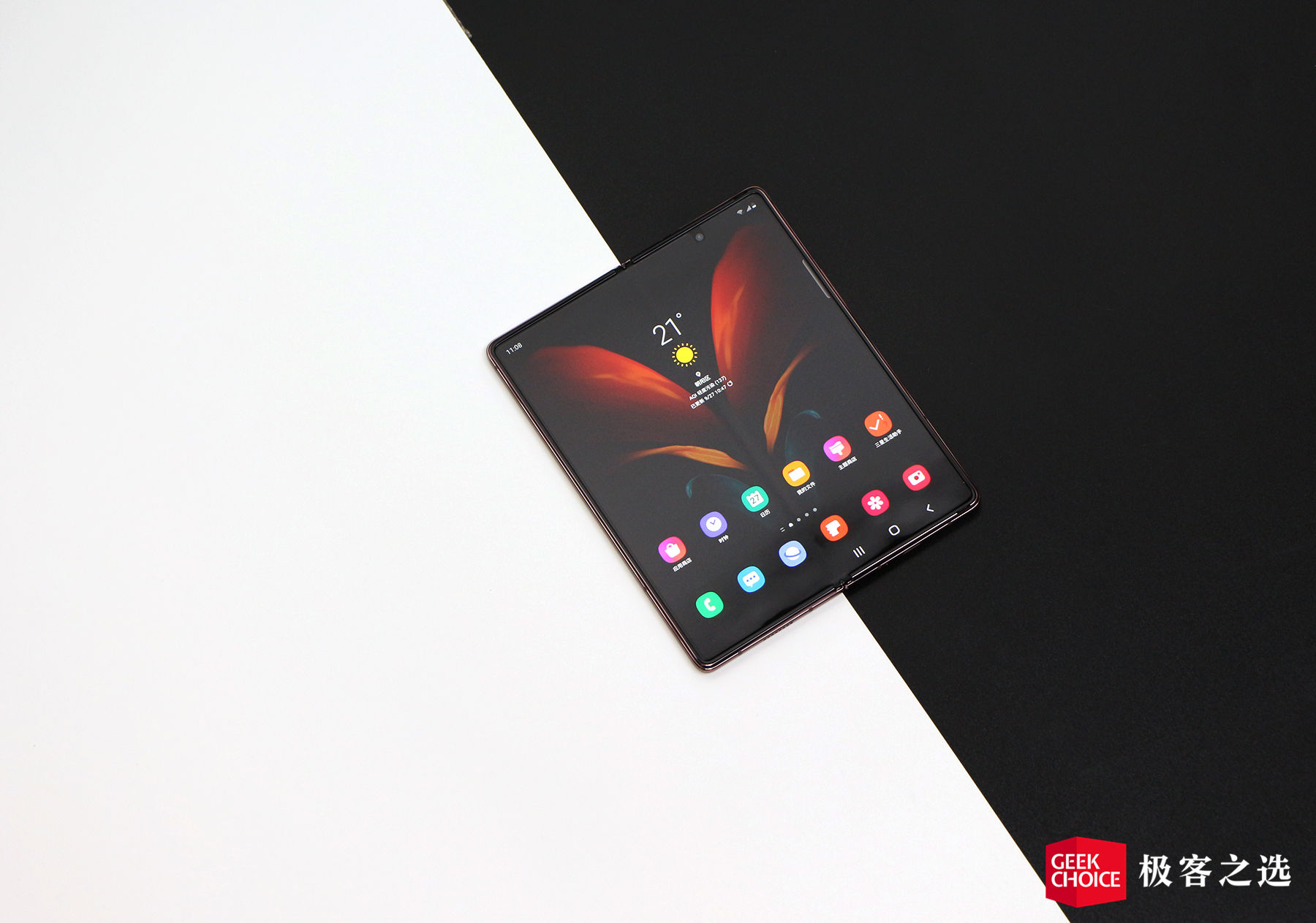 The key point is the inner screen. After switching to infinity-o full screen solution, the screen cutting area of Galaxy Z fold25g has been greatly reduced compared with the previous generation, which brings better screen appearance and makes people feel more "mainstream". 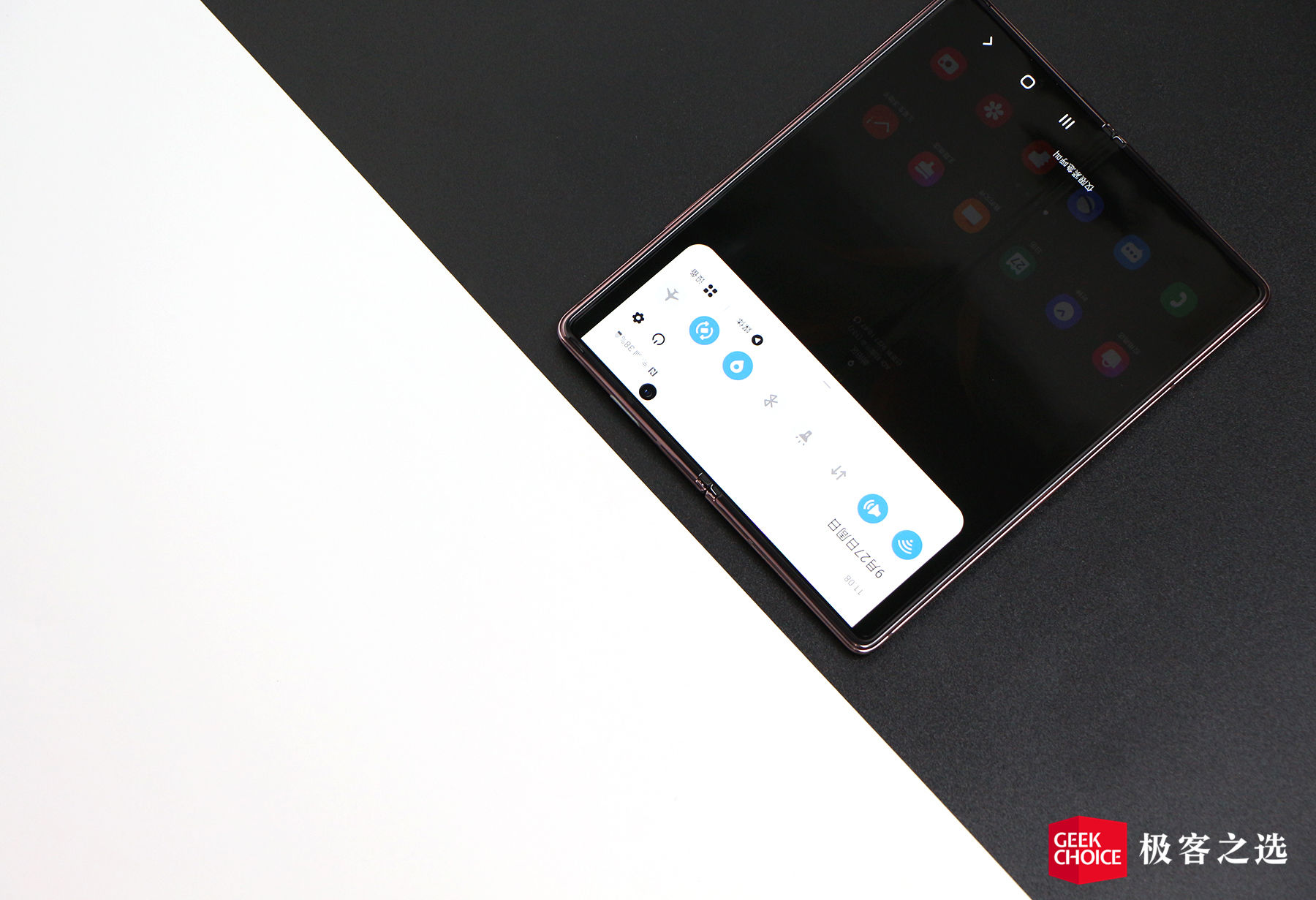 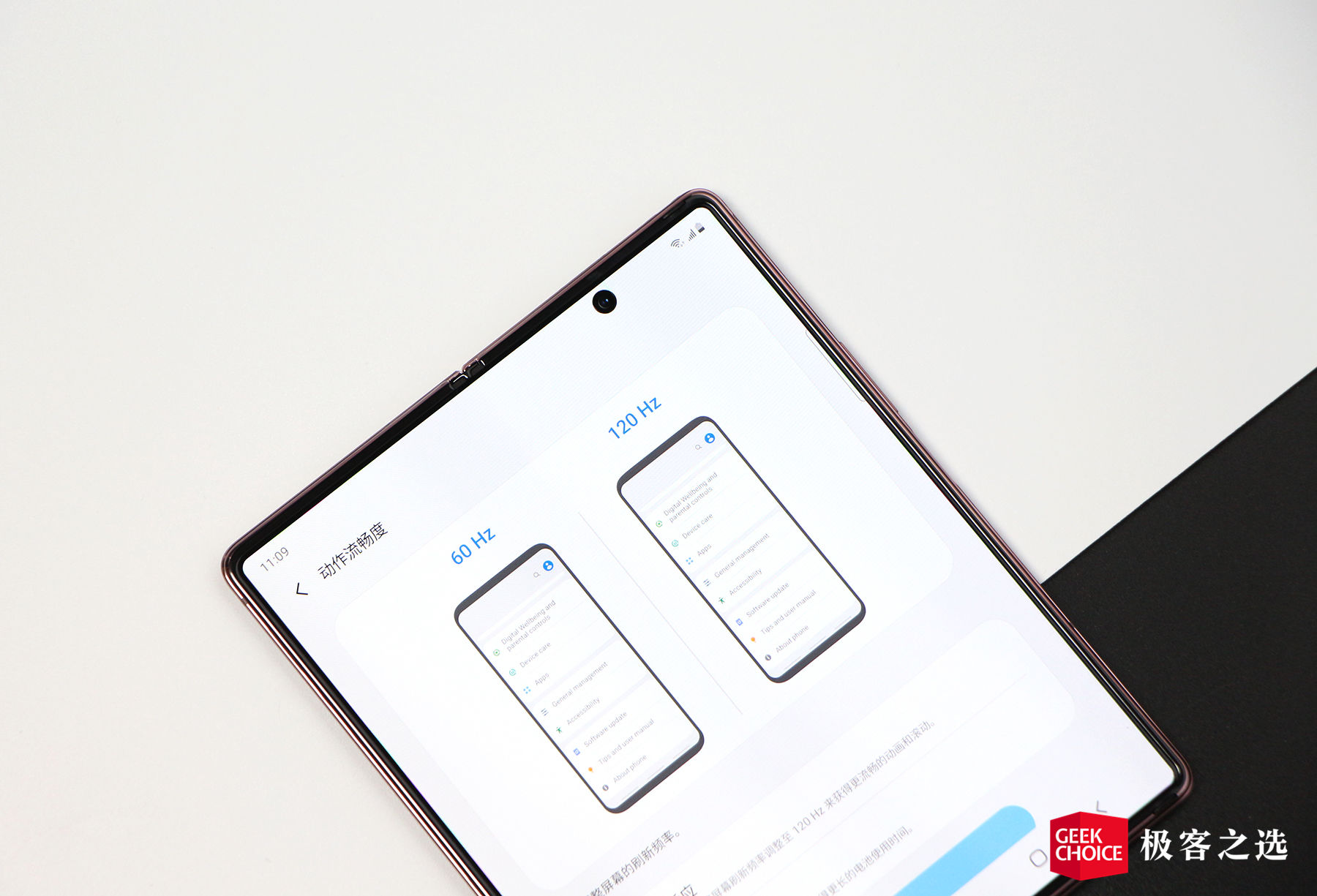 What's surprising is that after its regular flagship followed up on high refresh rate screens, Samsung soon introduced this feature to Samsung Galaxy Z fold25g, which supports 120Hz screen refresh rate (external screen 60Hz), which is the only folding screen mobile phone equipped with high swipe screen. We all know the advantages of high screen refresh rate, especially for large screen devices, the operation fluency is very easy to perceive.

In terms of color matching, Samsung Galaxy Z fold25g offers two options: foggy gold and Turquoise ink. The one we got is the misty gold version, which is also one of the main colors of Samsung this year. As far as the actual effect is concerned, it is between gold and pink. It looks very special. Girls should like it very much. Of course, if you want to be more low-key, you can consider the pine ink version. 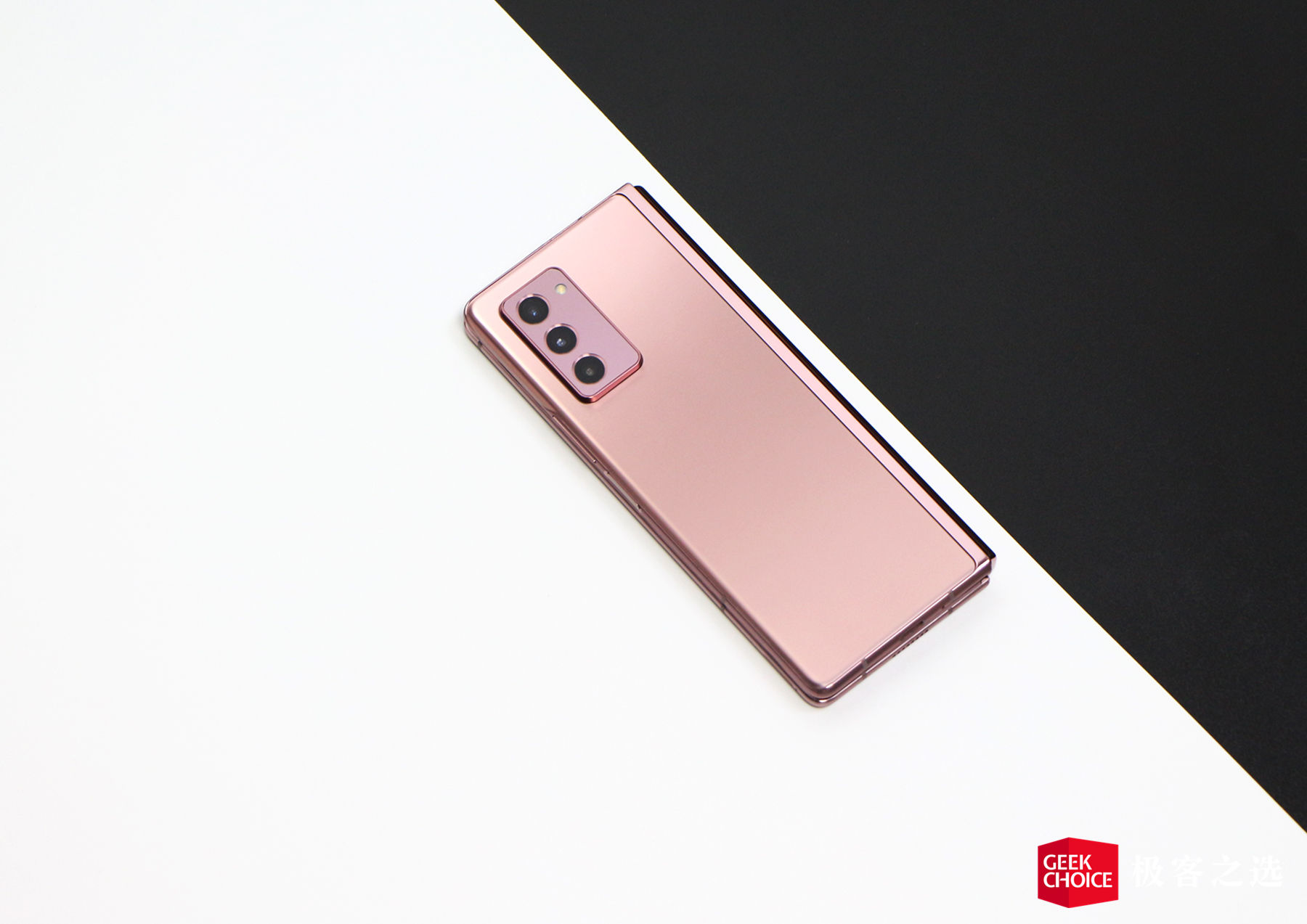 In terms of process treatment, the back cover of Samsung Galaxy Z fold25g is similar to the note20 Series in that it adopts the Ag sanding process which is popular this year. The actual handle performance is also close to that of the note 20 ultra, and it feels very delicate. What's more special is that the surface of the shaft is treated with bright surface, while the middle frame uses metal drawing process. The combination of several different processes makes it very delicate. 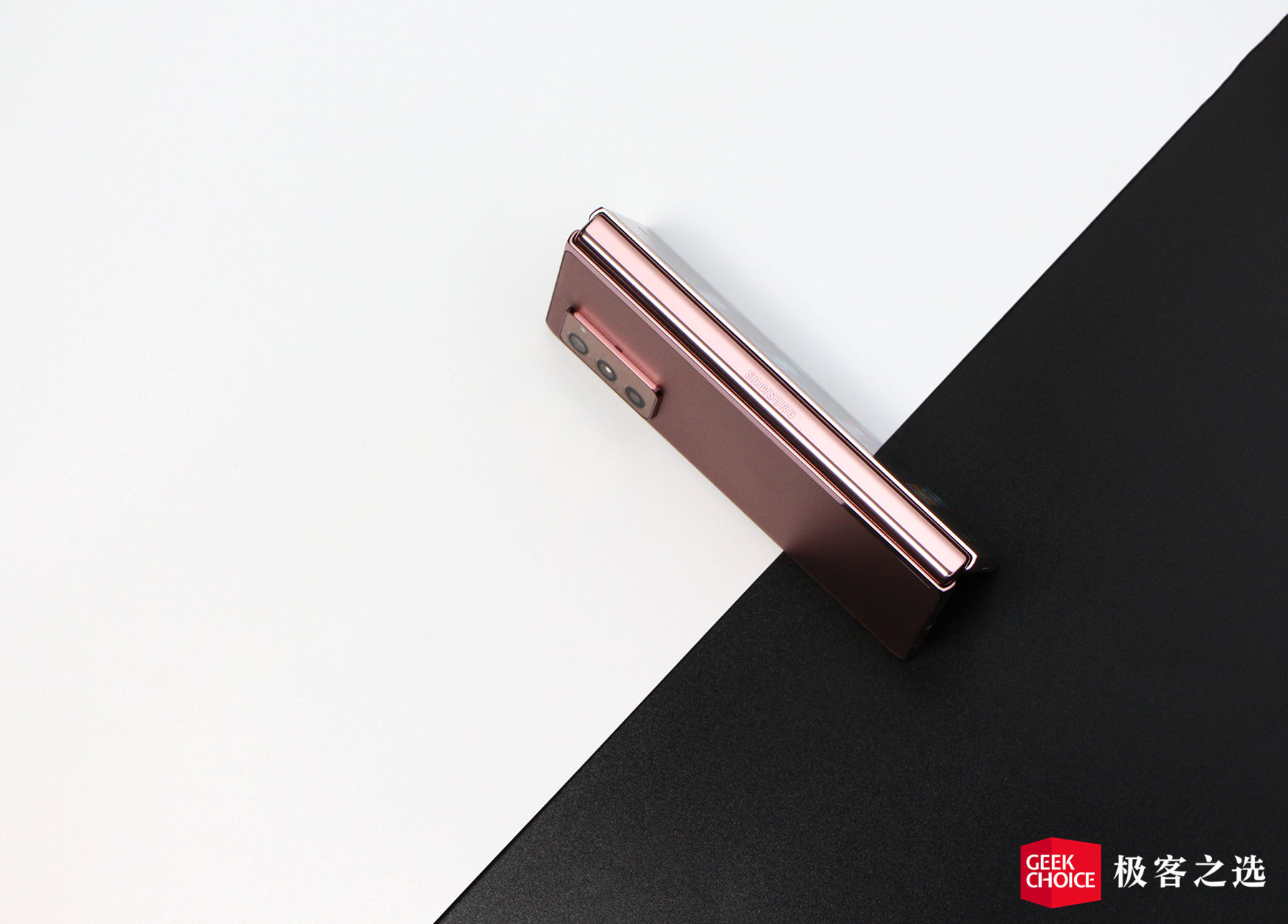 Samsung said that the shaft life of this generation of products is still about 200000 times, but the strength has been greatly improved. In addition to better durability, the change that we can easily perceive is that this time it is changed to the same multi angle hover design as the galaxy Z flip. You can adjust the opening and closing angle of the screen according to your own needs. 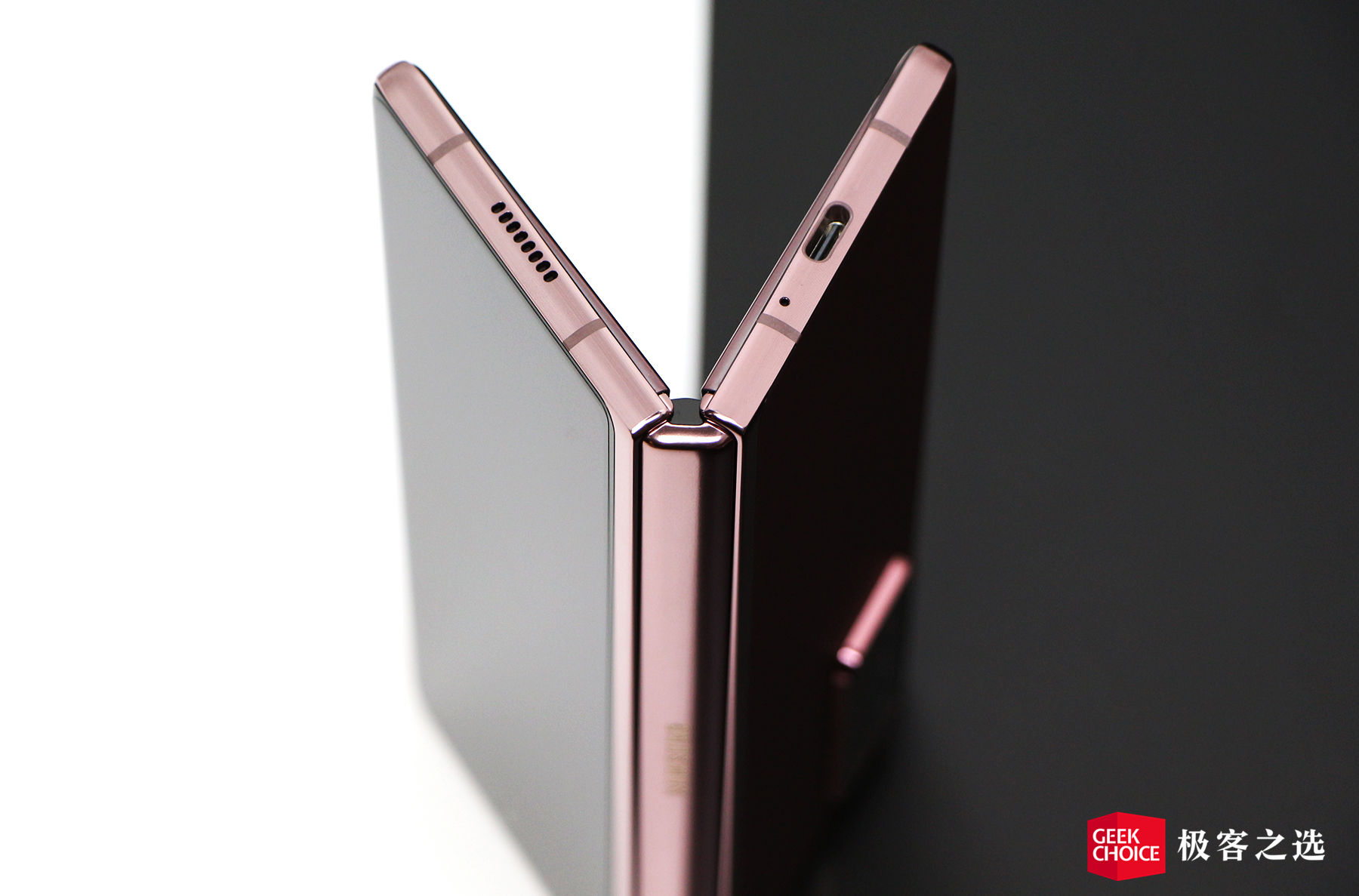 The biometric scheme is still a side power / fingerprint 2-in-1 button design, which is set slightly above the center of the right side of the fuselage. The thumb is easy to reach. There is not much to say about the unlocking speed and recognition accuracy. 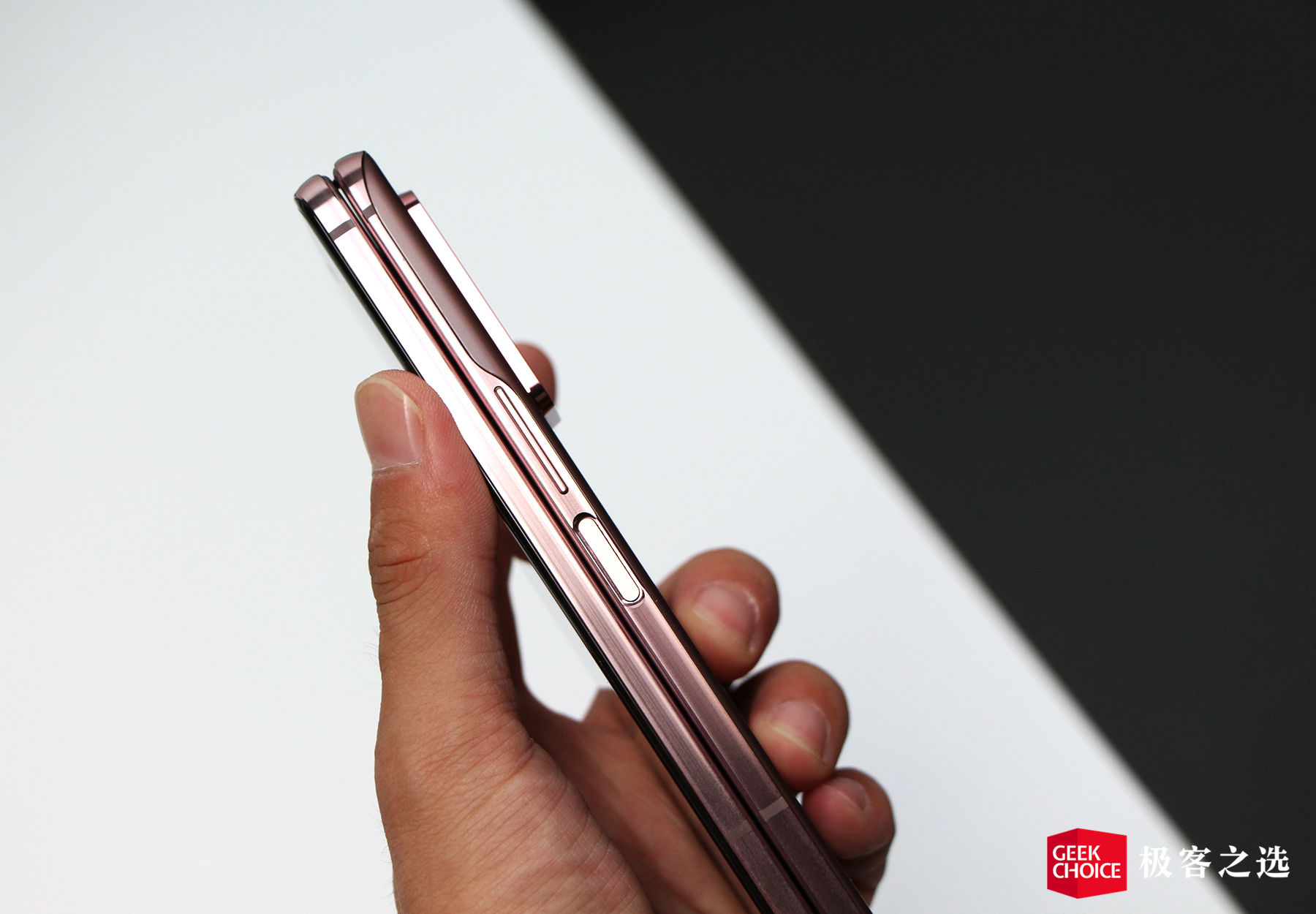 In the unfolded state, the length, width and thickness of Samsung Galaxy Z fold25g are 159.2 mm, 128.2 mm and 6.9 mm respectively. After closing, the width is 68 mm, the thickness is between 13.8 mm and 16.8 mm, and the weight is controlled at 282 G. It's hard to describe it as light by the standard of a conventional mobile phone. However, when it is put into a folding screen mobile phone, the performance is not bad. 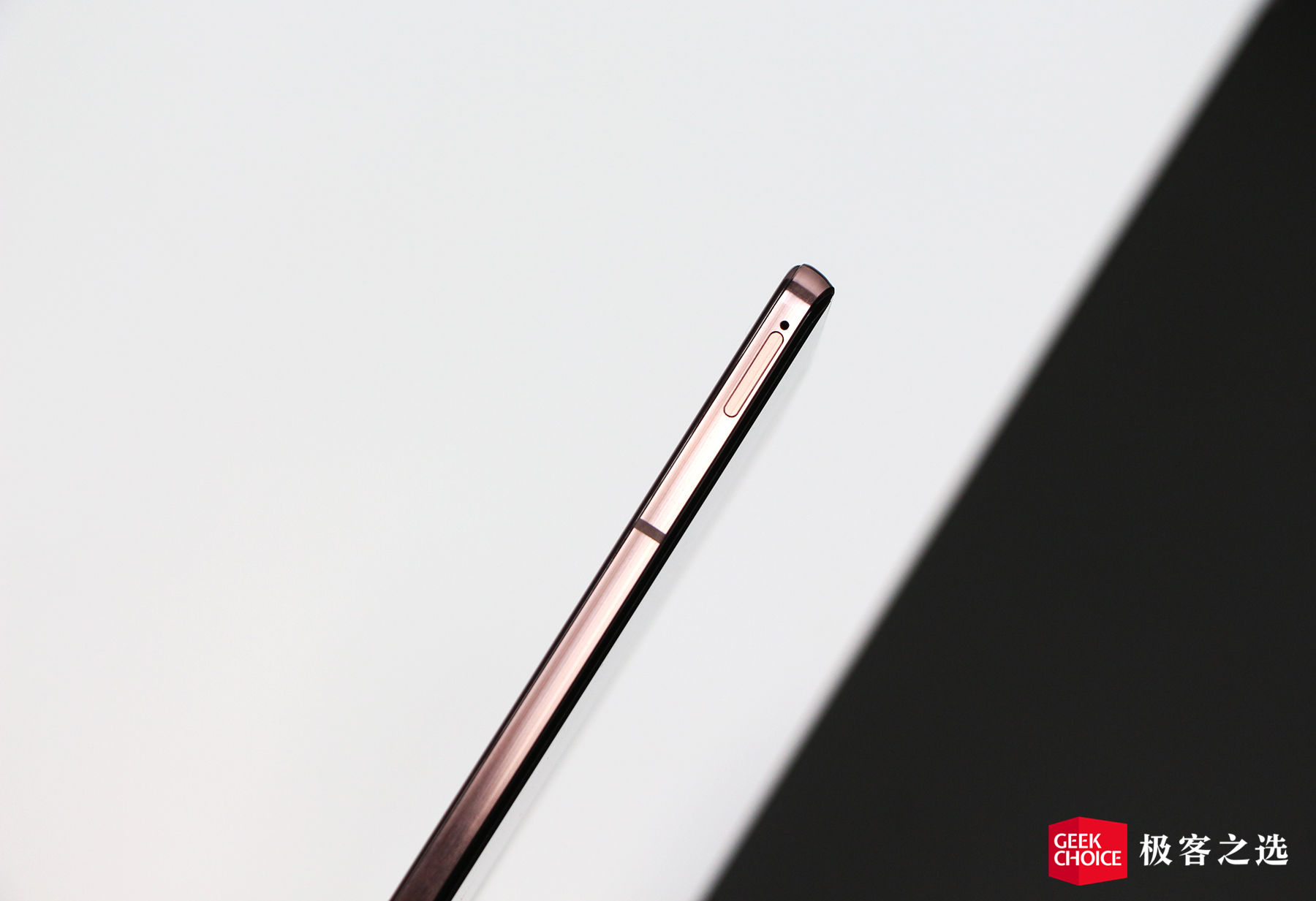 As far as the actual grip is concerned, in the closed state, as the fuselage is narrow enough, you can hold the phone directly, and there is no problem of excessive pressure on the thumb. After deployment, it is much larger than the conventional mobile phone, more suitable for two handed operation.

After the launch, the screen size of Samsung Galaxy Z fold25g has reached 7.2 inches, which is close to the level of many small-sized tablets. The direct benefit of large screen is more display area. Whether browsing text or watching video, the richness of screen content is much more than that of conventional mobile phone. 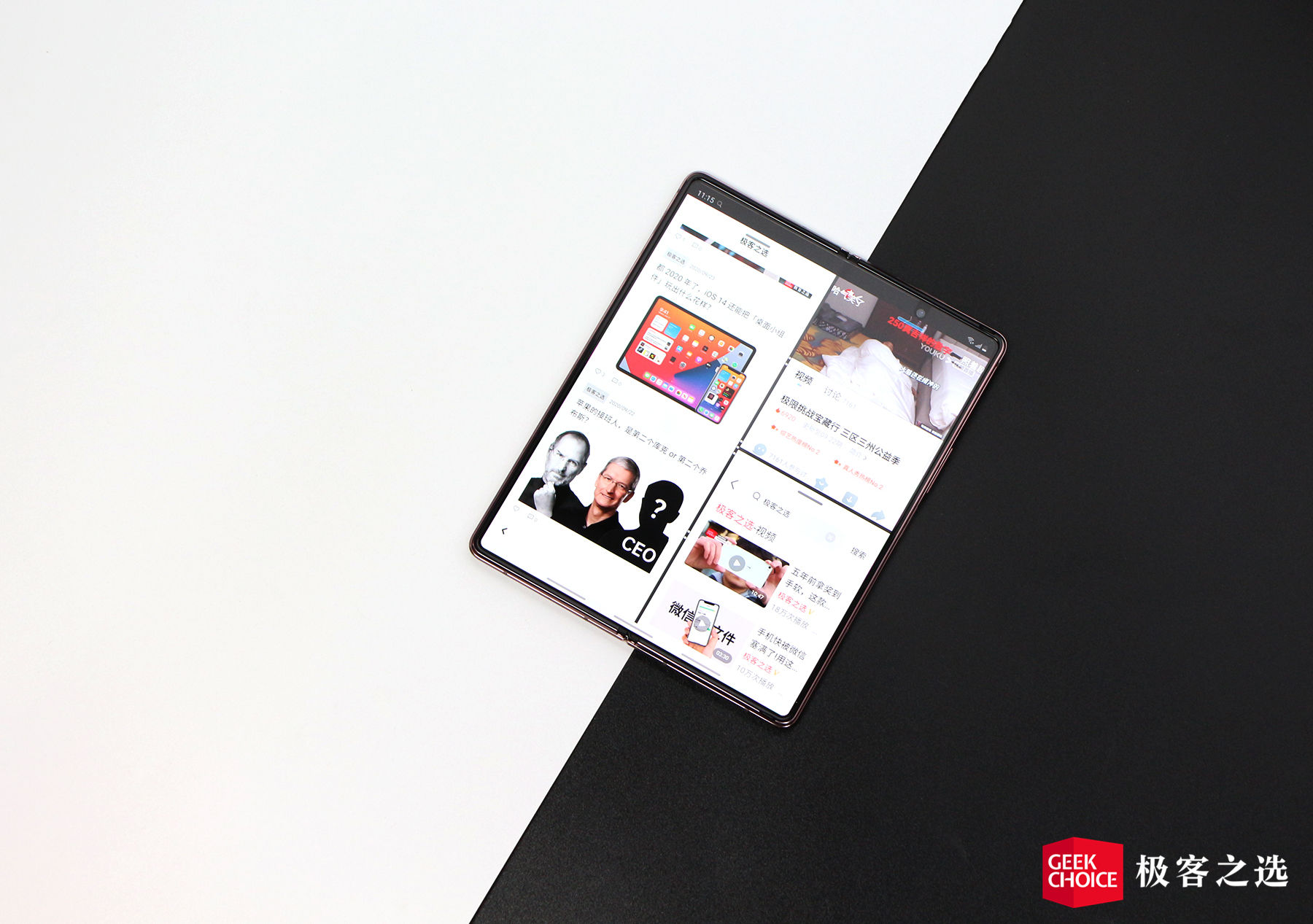 But if you want to make the product more attractive, it is obviously not enough. Samsung also sees this more clearly. It can support three applications for split screen display at the same time, and the operation logic is relatively simple. You just need to drag the application you want to open from the sidebar to the desktop. Because of its large screen size, the viewing effect of each application is obviously better than that of most conventional mobile phones. 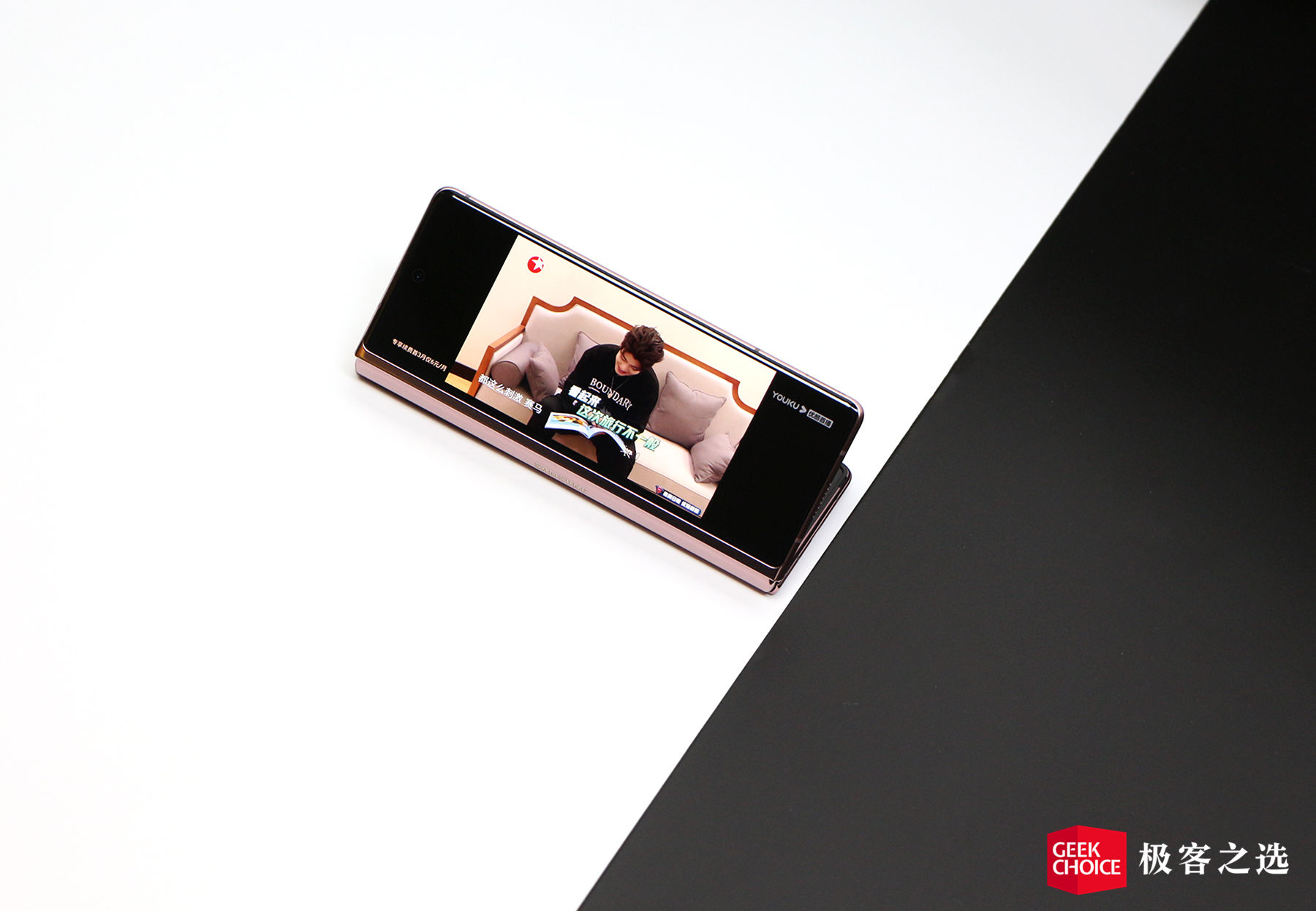 In addition, due to the multi angle hovering characteristics of the shaft of this generation of products, it also brings a variety of use forms including mobile phones, tablets, tents, etc. Take watching videos as an example. If you want to watch videos more easily on regular mobile phones, many people will choose to buy extra mobile phone holders. However, on Samsung Galaxy Z fold25g, you just need to adjust to tent mode. 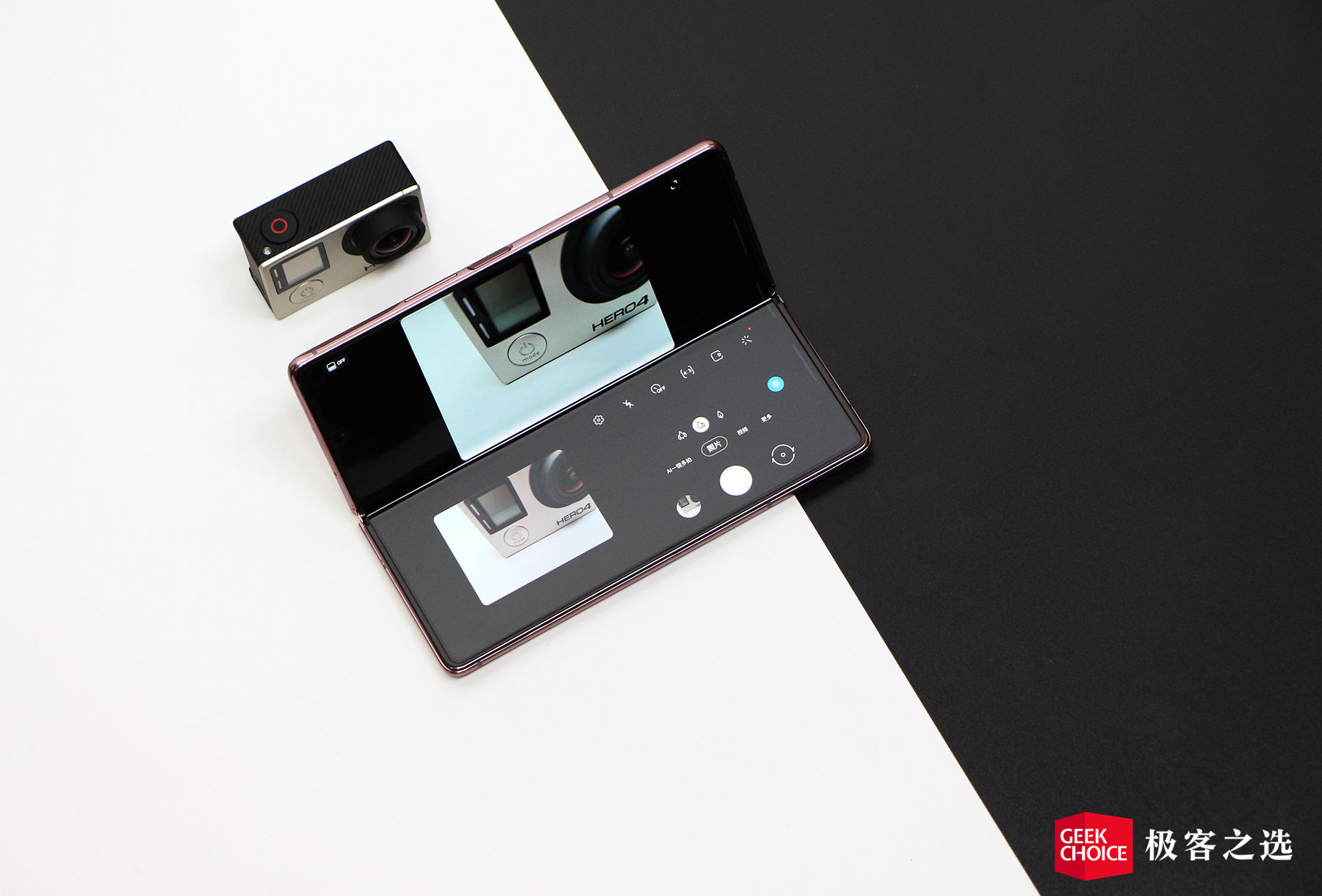 In addition to what we mentioned above, Galaxy Z fold25g also draws lessons from some new attempts of Galaxy Z flip in camera applications. When the mobile phone is not fully deployed, the camera interface will automatically display by "center line". The upper part is the viewfinder and the lower part is the function area. At the same time, it can also realize the "external screen preview". When taking pictures with the main camera, the other party can directly see his current state on the external screen in real time. 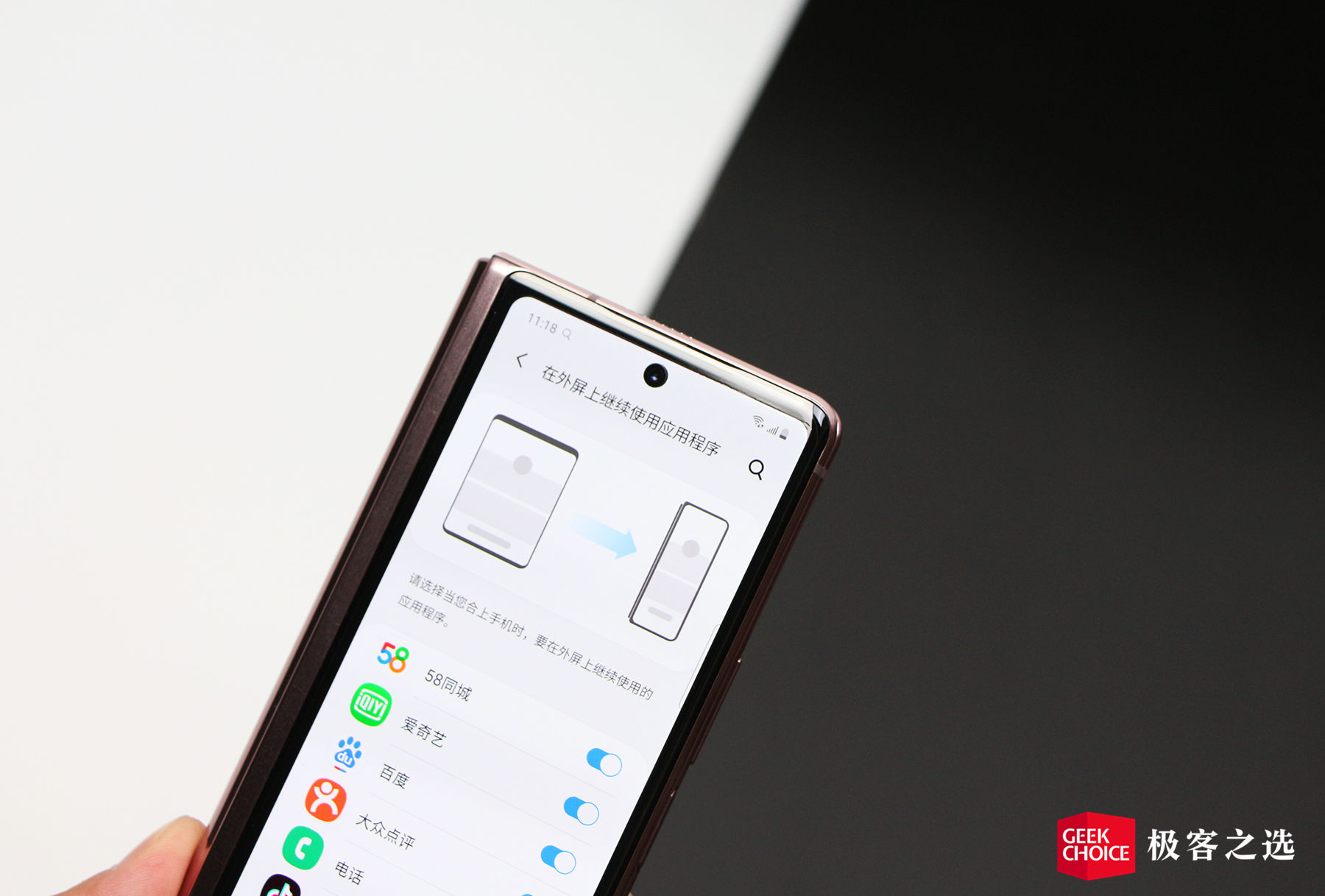 In addition, the inner screen and the outer screen are not separate islands. In the setting, you can choose the program that you want to continue to use on the external screen when you close the phone, and the display screen between the internal and external screens will be synchronized automatically. For example, when you use the geek Park app to browse articles on the internal screen, the external screen will continue to display the current interface after closing the phone, which is also the case in the past. In this way, the problem of inconvenience caused by temporary switching mode is well solved.

In terms of core hardware configuration, Samsung Galaxy Z fold25g of BOC version is equipped with snapdragon 865 plus 5g SOC, supporting SA and NSA dual-mode 5g, matching with 12gb running memory and 512gb body storage. We have also tested the snapdragon 865 plus before. Compared with the snapdragon 865, the CPU and GPU performance have improved to a certain extent, and there is no pressure to cope with daily use and game scenarios. 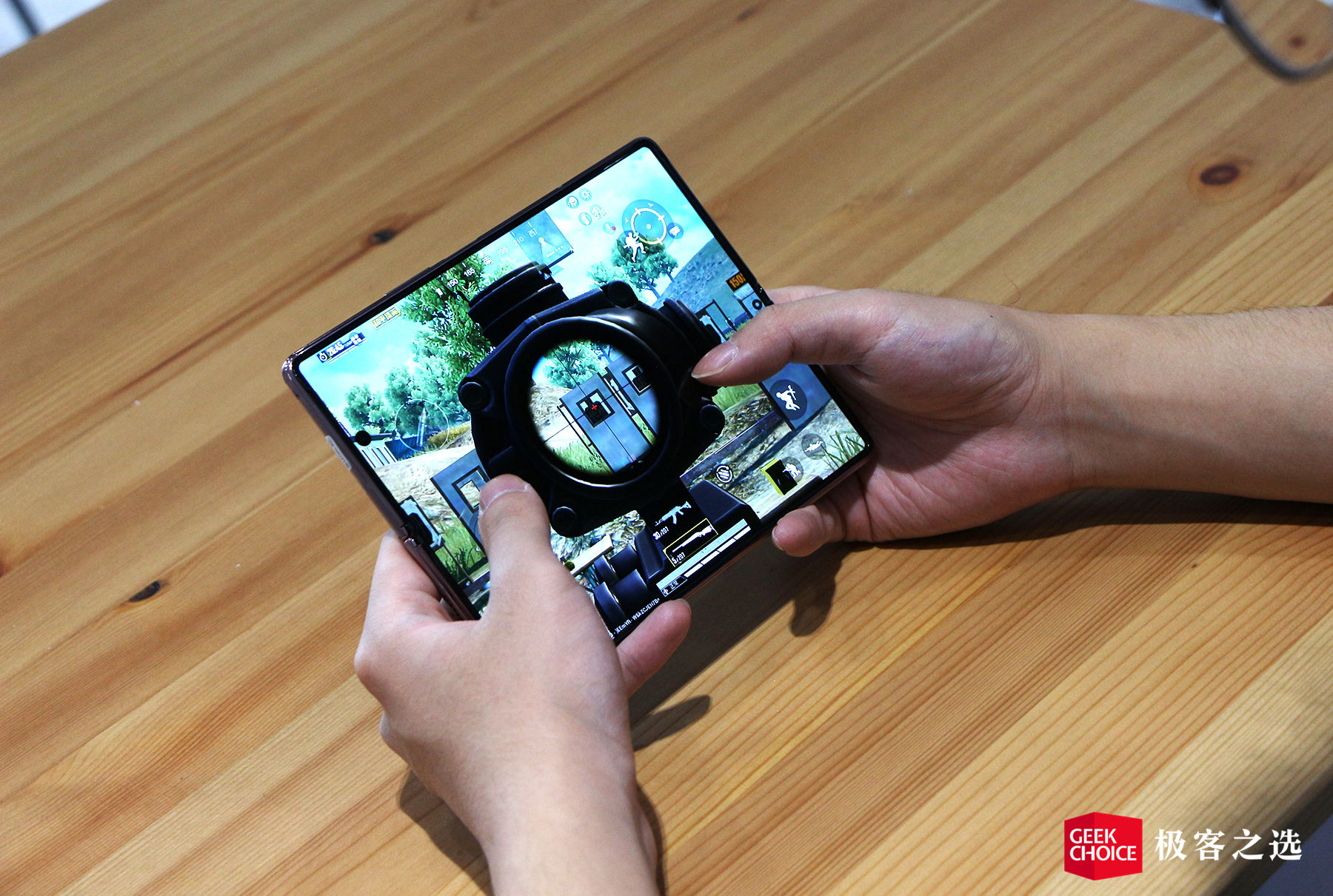 Different from conventional mobile phones, Samsung has a 10 megapixel front-end camera on both sides of its internal and external screens, considering the self-image requirements of the two modes of use. Both of them can not only support self portrait of beauty, but also share a set of facial data. In other words, after you input the facial information, whether the mobile phone is in the expanded or closed state, you can realize the facial unlocking. 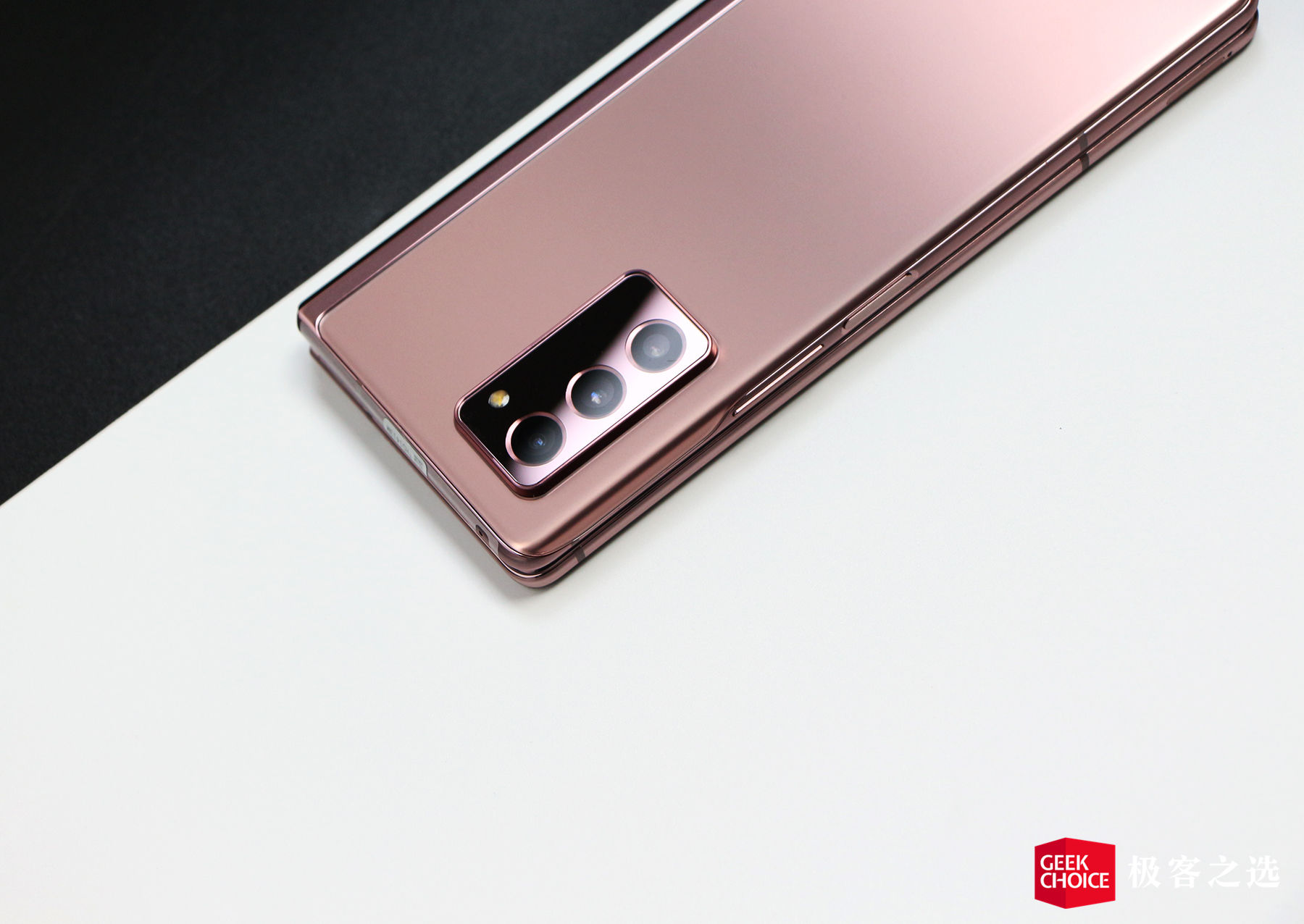 The rear camera adopts the same design style as the note20 series, and adopts the matrix design with vertical arrangement. It includes a 12 megapixel main camera, a 12 megapixel ultra wide angle lens and a 12 megapixel long focus lens supporting 2 times optical zoom, which is enough to meet the normal shooting needs of most people. 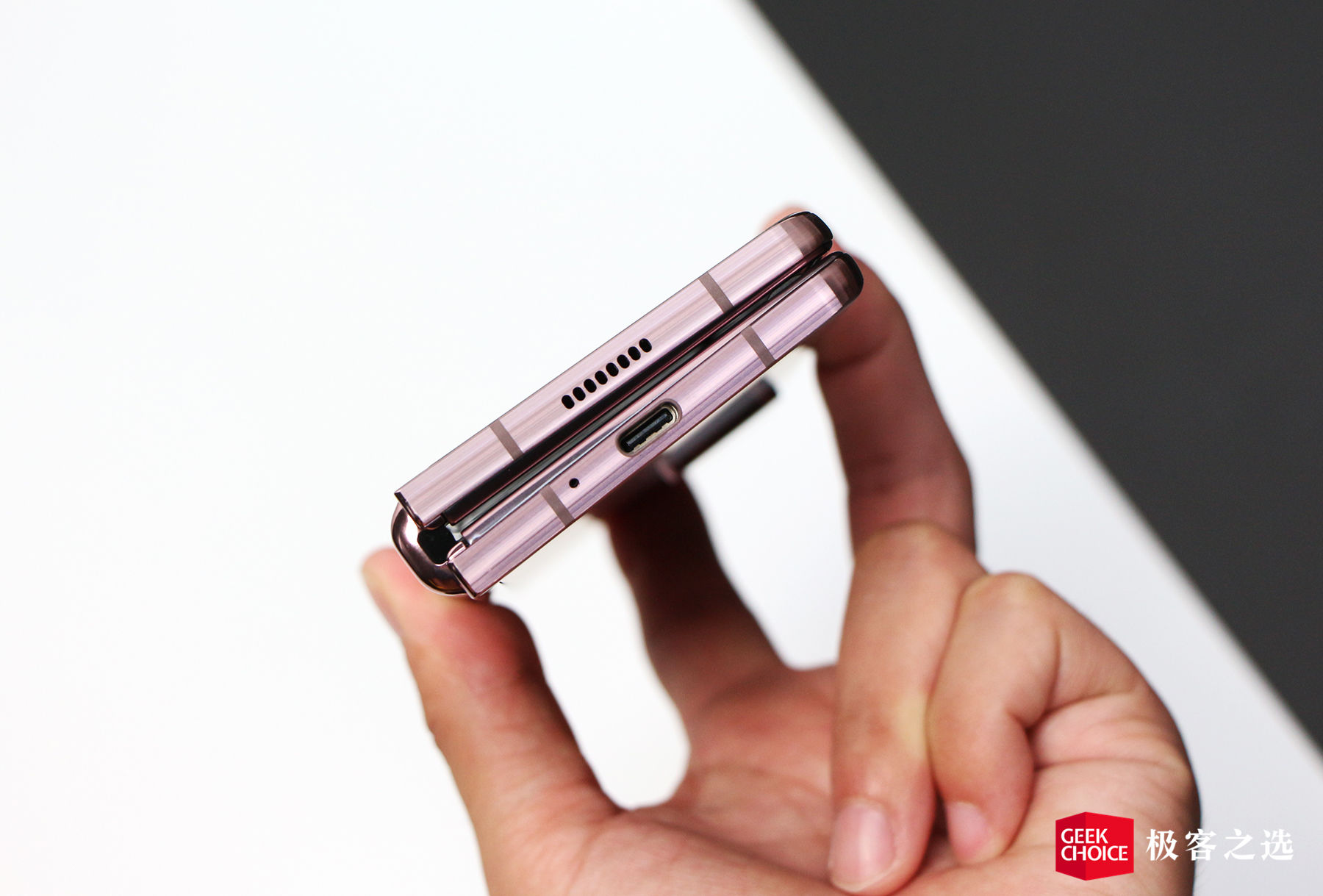 As for the battery life that people pay more attention to, it is probably due to the influence of 5g, high screen refresh rate and larger external screen. Samsung has increased the battery capacity of Galaxy Z fold25g from 4380mah of the previous generation to 4500mAh. As far as my personal usage habits are concerned, it is still OK to charge every day when the movement fluency is set to adaptive.

Those who have read the whole article carefully should also find that Samsung has used many technologies and design concepts that have been verified by other products in the market before in the galaxy Z fold25g product. Although the official does not specify it, in fact, it is the highest level Samsung can achieve in such a new category as folding screen mobile phones. 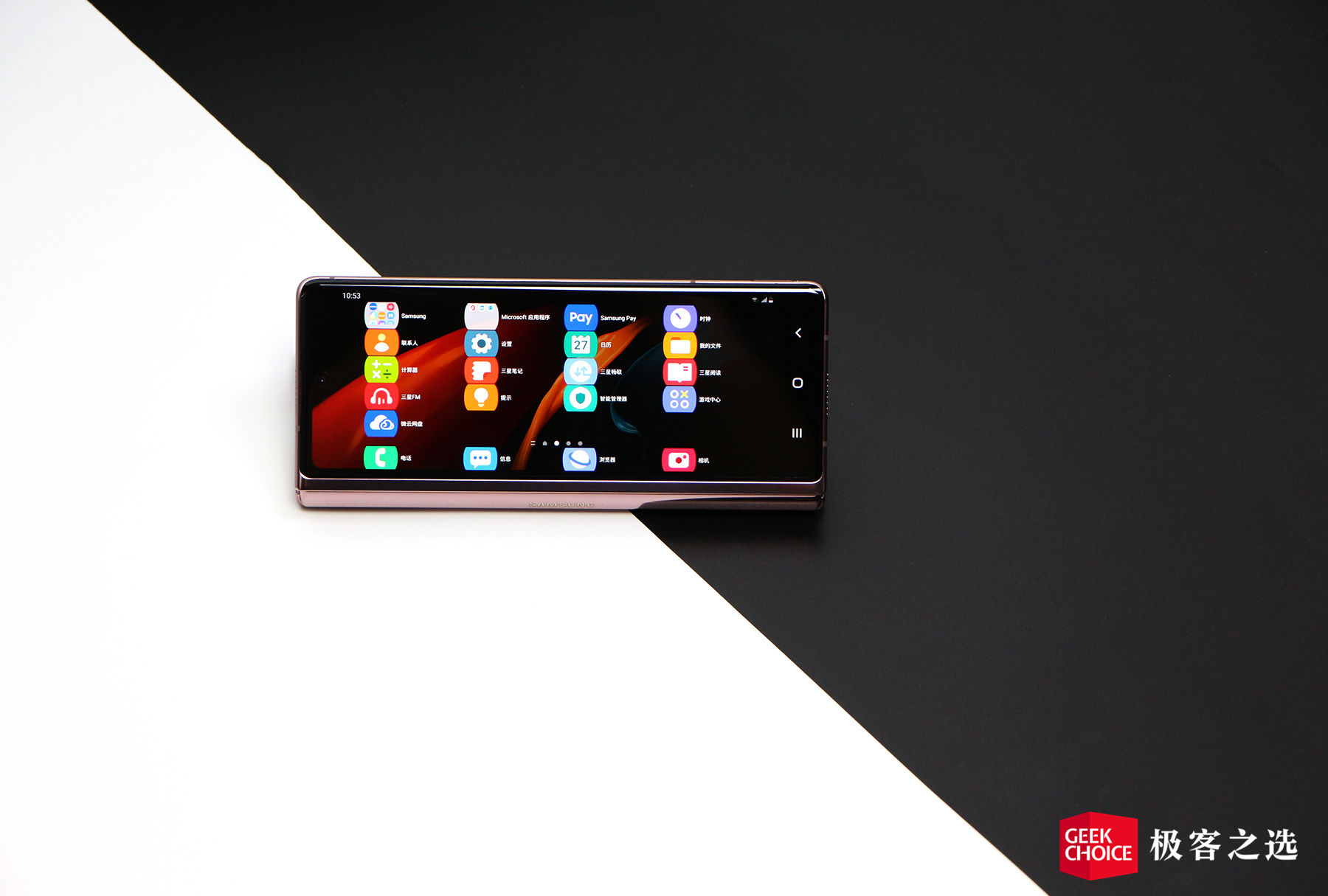 In order to balance the cost and pricing, many folding screen phones had to make some compromises in addition to the two core parts of the screen and the pivot, so when compared with the regular top flagship, it seems that there is not much attraction except that they look cool.

Samsung Galaxy Z fold2 5g The biggest difference is that it not only achieves the top level of the industry in terms of materials, performance, screen refresh rate and image ability, but also has not been opened up by conventional flagship products. It can provide almost everything you want. This is the folding screen mobile phone that we think has the most mature comprehensive performance.