From PC VR to VR all in one, Facebook is a radical in VR field. Not long ago, oculus quest 2, which has long been expected by insiders, was finally released at the Facebook connect developer conference. At the same conference, Facebook announced another determined news that the PC VR product rift s will be discontinued in 2021. This means that from 2021, Facebook will focus on VR hardware on VR all-in-one.

Oculus Quest 2: the "masterpiece" that was robbed of the limelight by brothers

The emergence of oculus quest has revolutionary significance for VR industry to transition from PC VR to all-in-one machine era, which is a fact recognized by the industry.

As the next generation product of oculus quest, is oculus Quest 2 just a product iteration, or is it also of epochal significance?

This is a question worthy of further study.

Before we explore this issue, let's take a look at what's new with generation 2.

If only from Mark Zuckerberg's new product on the Facebook Connect, it can be said that the second generation of products in addition to the main color to white, other designs basically follow the style of a generation. 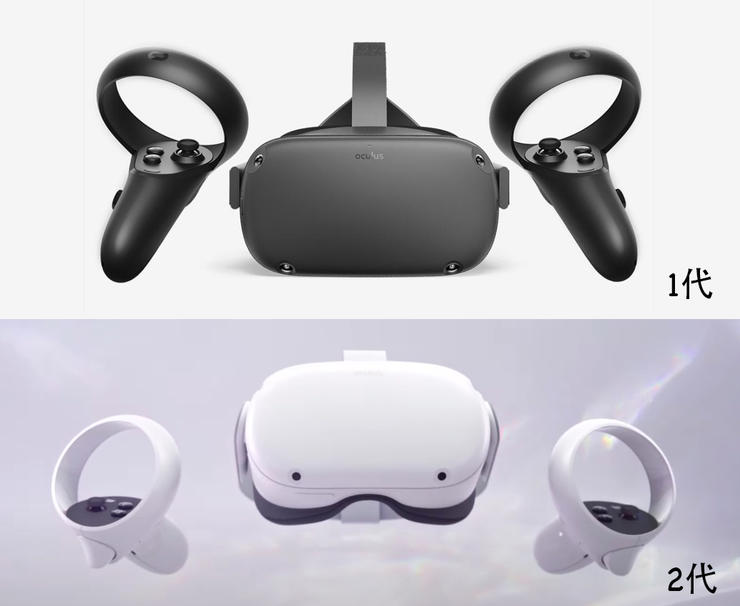 It is in such a case that there is little redesign, and the R & D team has readjusted two of the core hardware units - that kind of adjustment of the replacement scheme.

Due to different materials, in theory, the color restoration degree of the second generation products is worse than that of the first generation products. Zaza explained at the press conference that the adjustment was for higher clarity.

Of course, this is the official statement, and some people in the industry speculate that in fact, there is also Xiaozha's hope that by reducing the cost of this product, the second generation product can become a real product.

After all, Xiaozha hopes that the sales volume of this product can exceed 10 million.

Processing unit, CPU directly changed from the original snapdragon 835 to XR2 platform, which was newly launched by Qualcomm at the end of last year.

This is one of the most important features of this generation of products. It not only uses the latest dedicated platform designed by Qualcomm for XR, but also makes up for the performance criticism of the first generation products released last year. Even some industry insiders believe that oculus Quest 2, which uses XR2, can even compete with Facebook's own rift s in processing performance. 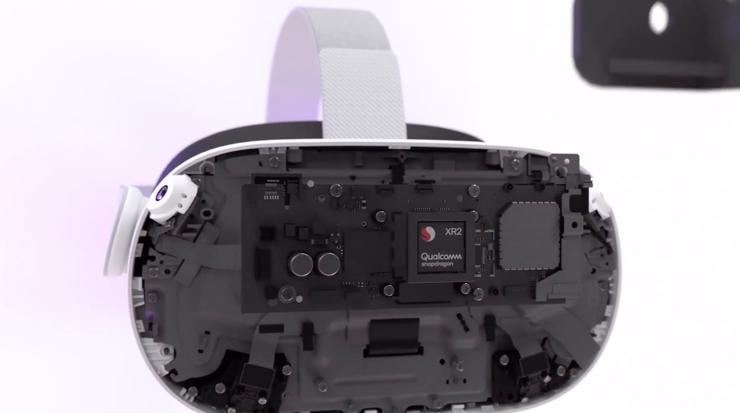 In addition, there are many other normal hardware version upgrades, such as memory from 4GB to 6GB, weight from 571G to 503G

As a result, when asked how to view the new product oculus Quest 2, many industry friends told Lei Feng:

Regardless of the problem that this product needs to log in with a foreign account, if a VR all-in-one machine product is recommended, this product will be the first recommendation.

So, the question is: can this product continue to be a God?

Therefore, only from the perspective of products, this product will indeed have a certain pull on the VR industry, just like Xiaozha's confident sentence at the press conference:

If our team made this product, it would be a great thing

But the price adjustment from $399 to $299 is more doomed to another task —— further sinking in the consumer sector, running and expanding the user base.

When it comes to VR, most people think of a roller coaster or a zombie horror game in the VR experience store in a large shopping mall or playground.

Actually, VR can do more than that.

Judging from the content that Xiaozha strongly stressed at the press conference, oculus quest has made more attempts in social and commercial fields.

For Facebook, whose main business is focused on the social field, one of the main reasons is that it is optimistic about the social attributes of VR, whether it is buying oculus or investing money in the construction of content ecology.

In addition to the existing social functions, Xiaozha also announced horizon, which is still in the internal test stage, at the conference. Users can create their own scenes and invite friends to play.

As early as 2017, Facebook launched the VR social platform Facebook spaces, where users can customize their avatar cartoon images and their own scenes. A room can accommodate up to eight people online at the same time.

After the launch of Facebook spaces, the official attached great importance to this product, and even did a lot of activities to drain it. Horizon is the follow-up product of this product. Long before horizon was released, the official shut down spaces in October last year, putting the team's main focus on horizon. 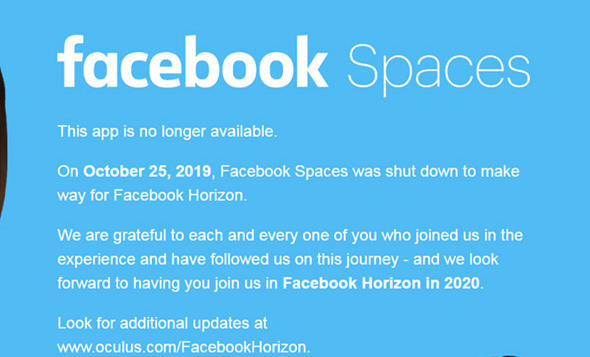 In addition to social networking, Facebook also wants its VR into the business world.

Infinite office can display your working interface in VR space through the effect of giant screen display. With a physical keyboard, it can replace the traditional office computer. 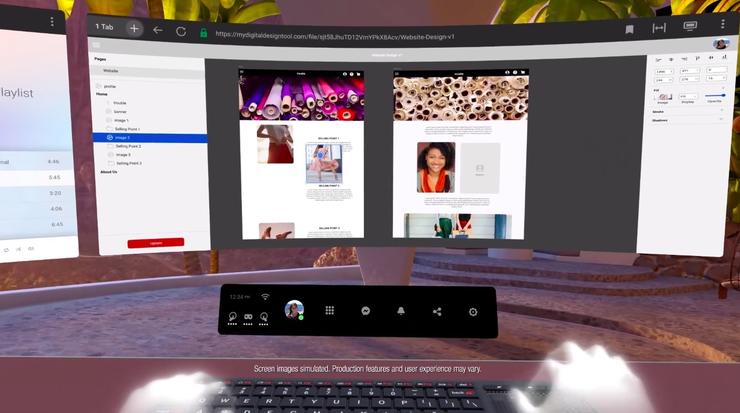 Although this kind of office has brought some imagination space in reducing cost, saving space and improving efficiency, it is not convenient to operate.

What really attracts C-end consumers to buy is still the game attributes of VR devices.

According to the official statistics, there are more than 35 games in oculus quest platform, with revenue of more than US $1 million, and users' consumption on quest has exceeded US $150 million.

VR game has been quite mature and will be an important business for us for a long time. At the same time, games are also the main driving force of user participation and consumption.

Just like the application ecology of smart phones, such as QQ, wechat, mobile games, short video and so on, the global average daily use time is from only 10 minutes to 5.4 hours in 2019 (data source: Apus Research Institute officially released the 2019 global mobile Internet user behavior guide), VR also needs a strong application ecology.

As you can't see, Xiaozha even started to move the sports fitness function which is similar to the main function of intelligent wearable to oculus quest, and gave it a new name oculus move.

Oculus PC VR product rift s will be discontinued in 2021.

This news seems to be a little sudden, but in fact, it has profound meaning and needs to be carefully studied.

One of the main reasons for stopping production of rift s is obviously:Oculus link will enable oculus Quest 2 to support 90hz PC VR games. Next year, the latest updated version will include all PC VR games and quest VR games in the platform.

Just as spaces, a VR social app developed by Facebook, gives way to horizon ahead of time, it is clear that officials also believe that next year (or in the next few years) the new oculus quest will completely replace the PC VR device rift s.

In fact, Andrew Bosworth, head of Facebook's AR / VR business, gave another reason for the suspension of rift s in an interview

Another reason for stopping rift s is to better allocate Facebook's team resources, so as to achieve the goal of popularizing VR more widely.

This has forced us to put another label on Facebook: a solid supporter of VR mobile platform.

The epidemic has hindered people from traveling around the world. It happens that chips, content and display solutions have accumulated into a small industry cycle, which makes the VR industry different this year.

Also in this wave of upsurge, many VR practitioners began to get excited.

Some practitioners believe that the last two years will be a bonus period for AR / VR content entrepreneurs, and content developers should seize this opportunity.

However, even if oculus Quest 2 has great potential, it has to make a choice in terms of clarity and color restoration of the display scheme. There are still slots in such subtle points as pupil distance adjustment

Even so, oculus Quest 2 ran out of stock as soon as it began to take orders (some regions showed delayed delivery).

It can be said that oculus Quest 2 has brought a product with more potential in appearance and experience for consumer VR, whether in terms of hardware carrying capacity or content ecological construction.

As for whether this product can really sell the first 10 million yuan as Xiaozha wishes, and whether it can create a miracle again, it is still difficult to predict.

At least, it once again ignited a torch for the entire VR industry.

Related news
What's behind Facebook's bet on VR and AR hardware?
Facebook VR's new year
Facebook is accused of illegally cracking down on VR competitors, US Department of justice is investigating
Another company to enter VR hardware VR real year?
Hot news this week
Biden signed a chip and scientific bill, a video call of WeChat iOS internal test suspension window, the advanced CPU caused Win11 to be difficult to use, Huawei new machines enter...
How to regulate the "broken card" operation to crack down on electrical fraud to prevent "accidental injuries" with cards?
Musk's eyes! Lei Jun released a full -size humanoid robot Xiaomi self -developed strength explosion table
Japan has confirmed that China has overtaken the US for the first time in the world's top three indicators of scientific papers
iPad 10 will be absent from iPhone 14 conference: October appeared on Apple's last non -comprehensive tablet tablet!
Kuaishou TOB business Yu Bing: Self -developed chips or mass production after the end of the year, the video must be turned into light industry
The three major indexes of the US stocks opened sharply: ROBLOX fell more than 4%, Twitter and Tesla rose more than 3%
The global streaming media have increased the animation circuit is becoming a new "breakthrough" for Youaiteng
After selling Tesla for $6.9 billion, Musk said he was not selling it, but a survey said he was still selling it. The title of the world's richest man may not be guaranteed next ye...
Meizu Pandaer Great: All products are reduced by 200 and 30 -containing mobile phone cases, heat dissipation back clamps
The most popular news this week
Pet dog infecting monkey acne suspected "Human Poor" American CDC Reform Control Guide
Space Launch System to Fly for First Time
Tencent's second-quarter net profit fell 56% from a year earlier to 18.6 billion yuan
Fabless customers cut back on chip orders affecting Q4 capacity utilization
Washington's suspicion of TIKTOK exacerbated: How will the Bayeon government weigh it?
Pinduoduo launched its cross-border e-commerce platform in the United States in September
Put an SSD in your phone: from 2,499 yuan
China's largest general purpose drone! The first five flights were successful
IPhone 14 to be released alongside Huawei Mate 50: Which bangs do you choose?
Tencent's agent of the Russian war online game announced the suspension: Customs Customs in October