According to foreign media reports,Twitter is developing a new product called birdwatch, which the company has confirmed is a solution to the problem of error messages on its platform by providing more annotated context for tweets.Tweets can be added to birdwatch through the pull-down menu of tweets, which means that they are marked for auditing. Other screening and reporting tools can be found here. A small telescope icon will also appear on tweets posted to the twitter timeline.

When you click this button, users are directed to a screen where they can view their tweet history.

This section allows users to record their contributions, that is, their birdwatch notes.

This summer, reverse engineer Jane Manchun Wong discovered the feature via Twitter, but at that time it was in the early stages of development and it had no name, but it clearly showed an interface for tagging tweets, voting tweets for being misleading, adding comments and further explanations. 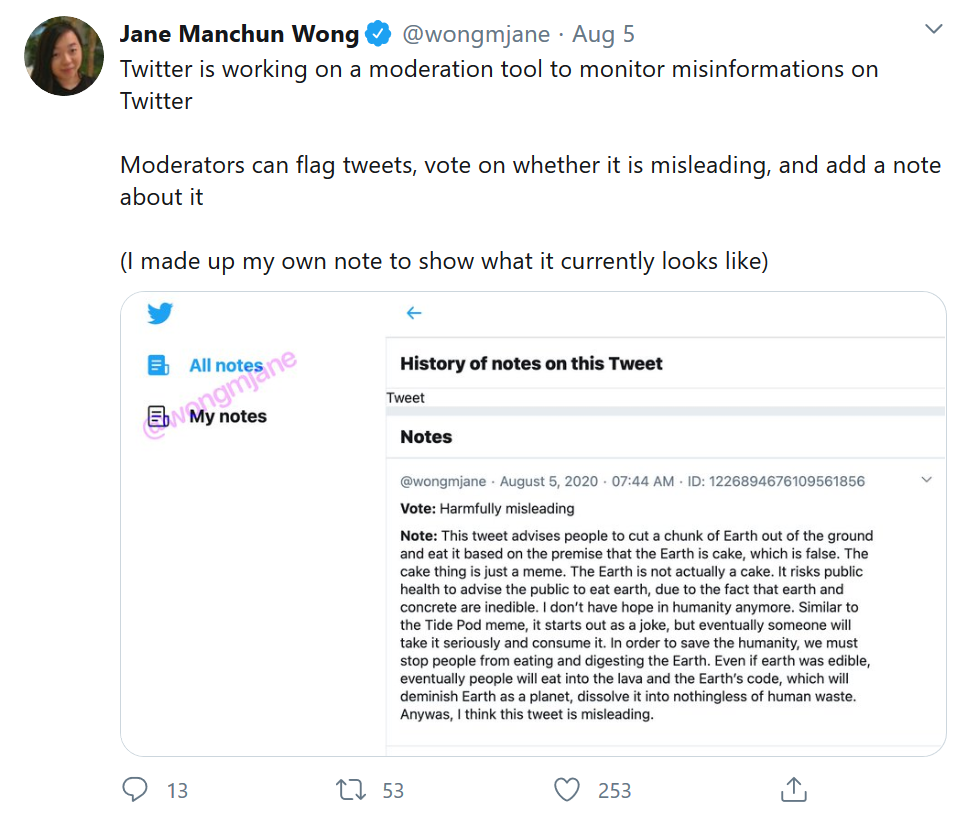 A few days after her discovery, twitter updated its web app, limiting further investigation into the feature.

This week, however, a very similar interface was found in Twitter's code, this time on IOS. 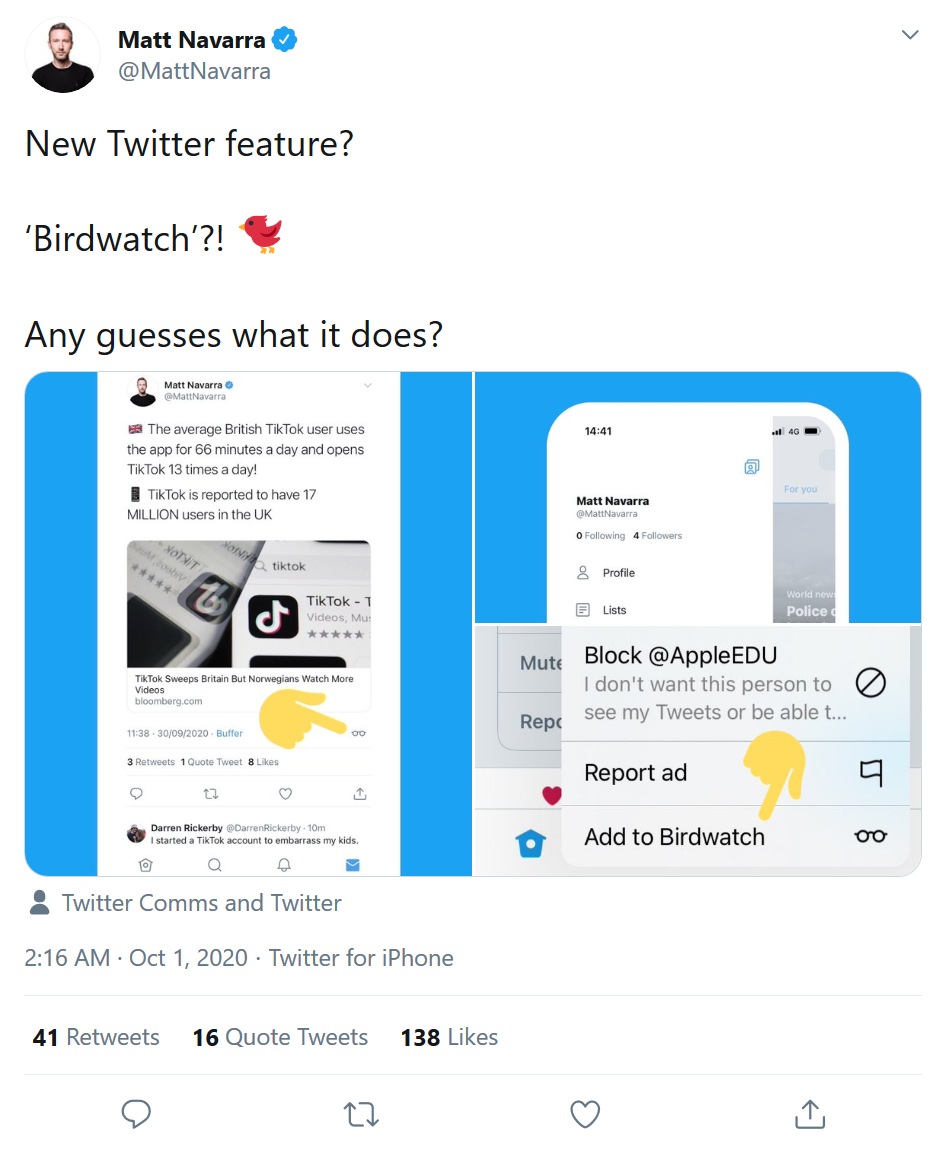 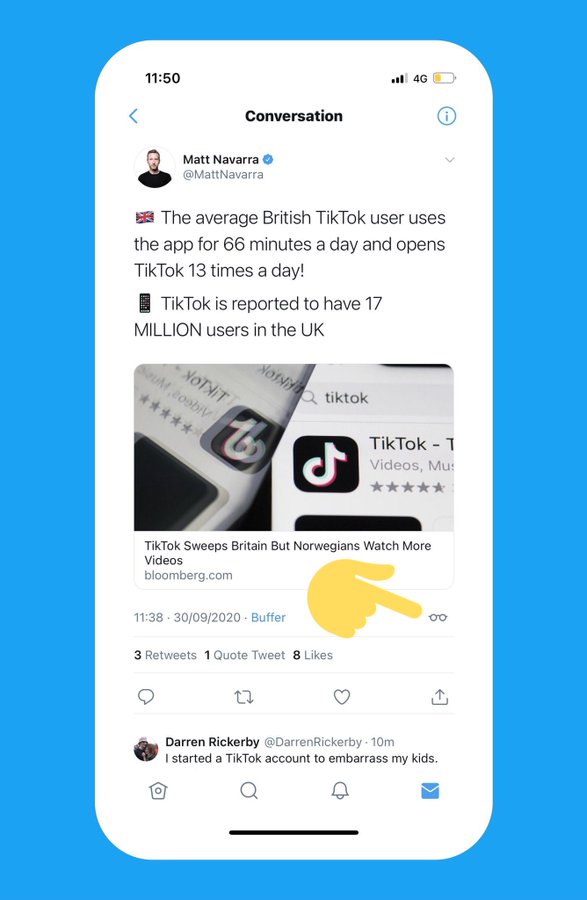 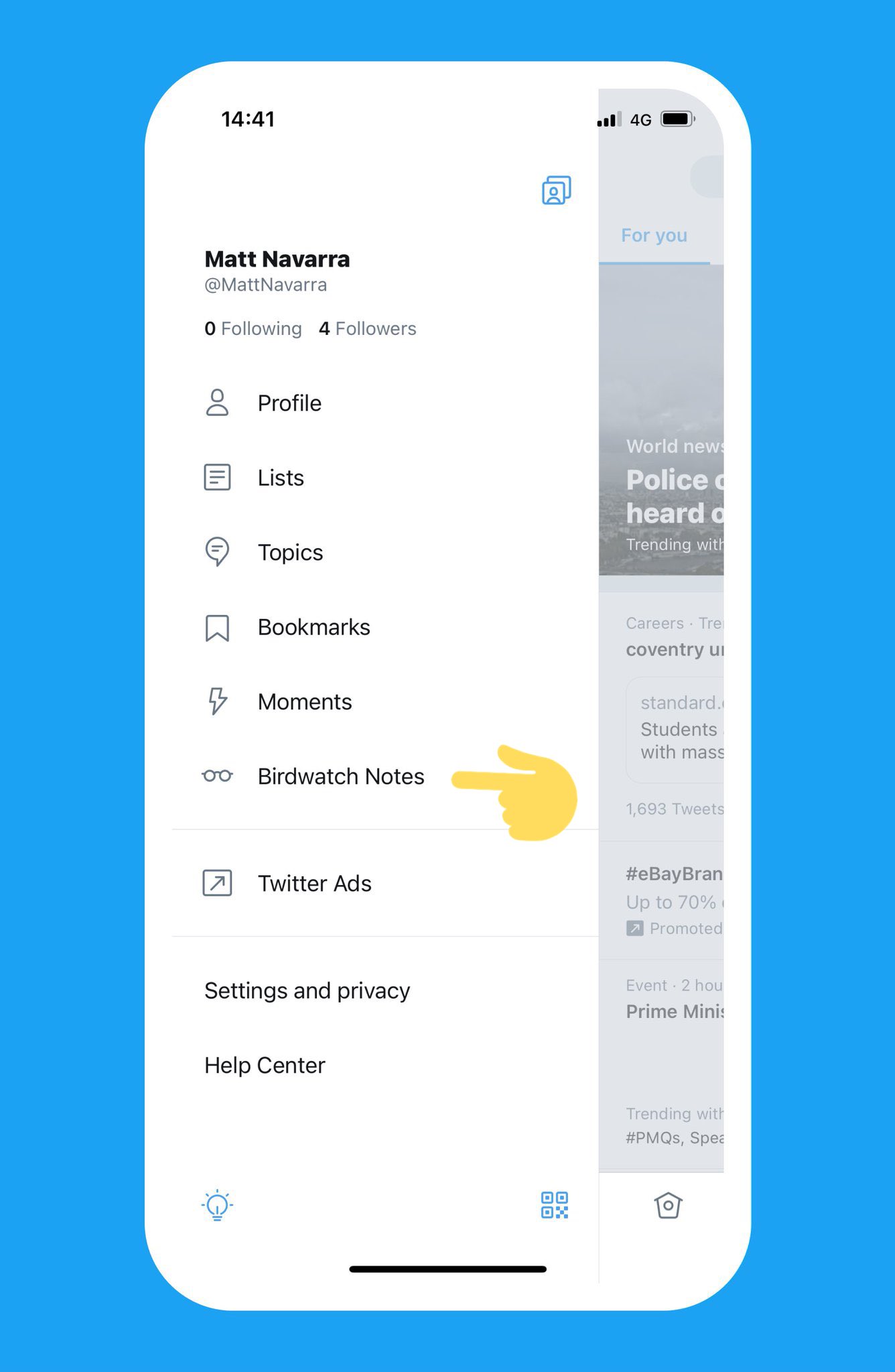 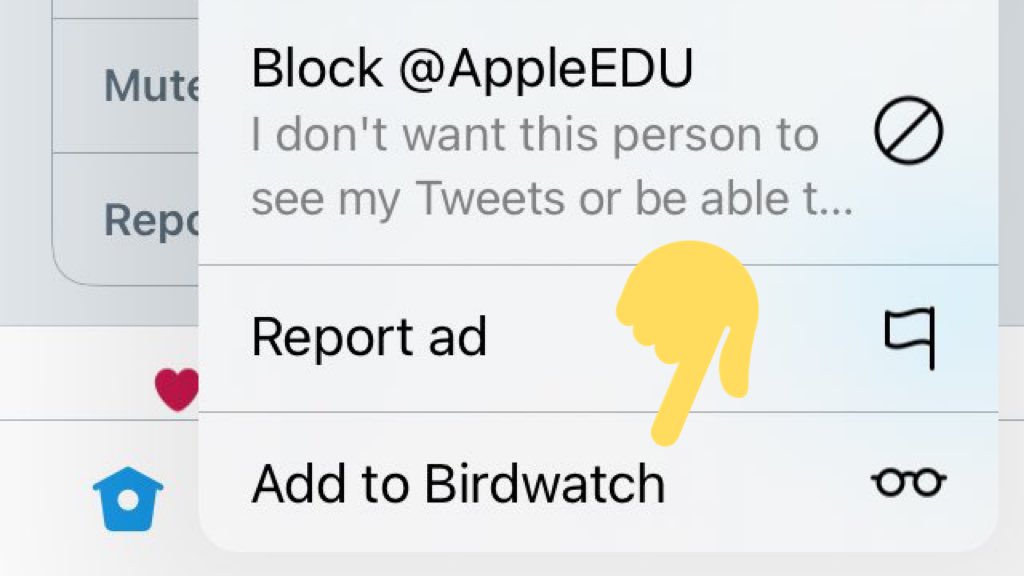 It's not clear whether every user on twitter will get comment tweet permission with additional context, or whether such permission needs to be approved or only open to specific users or fact checkers.

Chris Messina, an early adopter and tag inventor of twitter, publicly questioned whether birdwatch would become a "citizen monitoring" system for monitoring false information on twitter. It turned out that he was right. 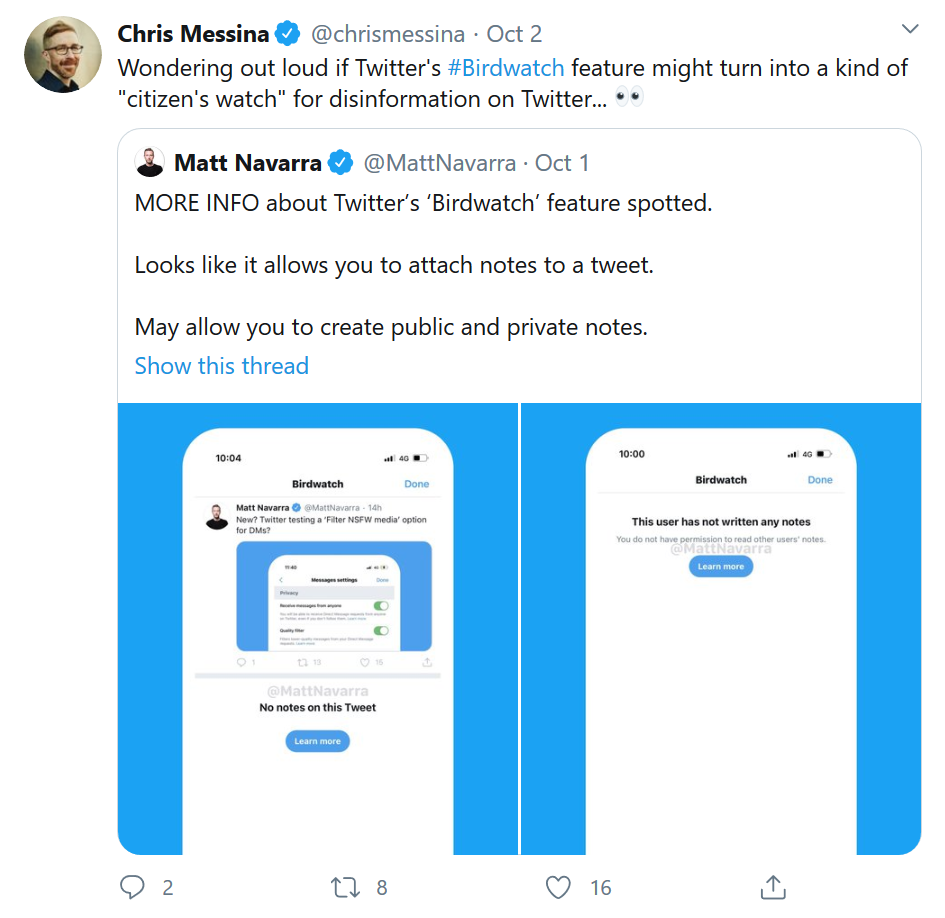 Based on the line entries he found in the twitter code, these comments -- birdwatch notes -- called contributions, seem to imply a crowdsourcing system.

However, from a non-technical point of view, there is still a lot of unknowns about how birdwatch will work.

The Twitter was contacted for comment, but Twitter declined to provide details about its Birdwatch plan, but confirmed that the feature was designed to prevent the spread of misinformation.

A twitter spokesman told techcrunch: "we are exploring ways to deal with false information and provide more context for tweets on twitter. Error messages are a key issue and we will test many different ways to solve it. "

Related news
Google messages launched Emoji response, local image editor and other new features
Twitter's new feature birdwatch: adding comments to tweets to deal with error messages
Google adds Emoji Emoji expression reply function for web messages (Figure)
Musk took a shot: Suggested allowing Twitter Blue subscribers to pay with Dogecoin
Indian Google Messengers SMS users receive a large number of spam ads suggesting a complete ban on RCS
Hot news this week
Female graduate students leave school to give birth to the hot debate is hype? The husband has set up a webcast company
How much is 4G than 5G! Huawei Mate50 network speed detailed measurement 6799 yuan to buy explosion money?
It's hard to find a machine! Huawei Mate50's first sales: oxen can not buy the price of 10,000 yuan to grab the price
Huawei City's proportion is the first! Survey: Northerners love to use folding screens more than southerners
Our global car he is a special car for China! Saic Volkswagen and FAW-Volkswagen are fighting each other
Chongqing Xiaomi Consumer Finance Co LTD has been fined 500,000 yuan for misappropriating consumer loan funds
Are they really aliens? The US Navy confirms there are multiple UFO videos: but they cannot be made public
The second phase of the main structure of Xiaomi intelligent factory is completed to see the delivery at the end of next year
In order to change the iPhone 14: Women's net red sells old phones and comes with a large number of private photos
4 million units are not enough! Huawei Mate 50 seconds sold out of the hack, the maximum price of 10,000 yuan to earn crazy
The most popular news this week
Tesla sales response "disguised price reduction of 8000 yuan" : for the end of the quarter impulse, temporary activities
Apple iPhone 14 standard version is not good for sales, Lixun precision may face the risk of ordering orders
Billions of euros in investment, Intel Italy chip factory will be located in the Veneto region, sources said
China Mobile to develop 5G Tidal Smart Antenna: Where the crowd
Huawei Smart Screen New Products Tomorrow: Sub -looking 75 and 86 sizes of the sub -brand
Apple conscience: AppleCare+User iPhone can repair unlimited times
From January to July this year, my country's industrial software product revenue reached 121.9 billion yuan, an increase of 8.7% year-on-year
China Mobile Development 5G tide smart antenna: signal dynamics follow the crowd
Foxconn dismantles production line! The iPhone 14 could be the worst-selling model in history: Apple's strategy to clear inventory has failed
The game does not produce plug -in first: "Call of Duty 19" B test has perspective+self -aiming plug -in