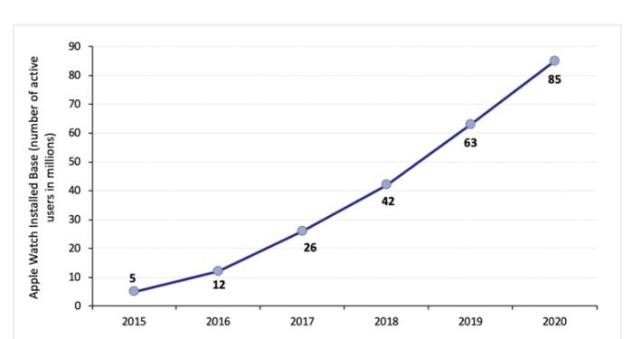 Apple watch installation base, i.e. the number of people wearing the apple watch

Tencent technology news, October 4, within a few months, the number of people wearing Apple watch will exceed 100 million. While technology media has been obsessed with the idea of fixed smart speakers and pure voice interfaces for years, it is apple watch and the utilities on the wrist that have brought about a new paradigm shift in computing. We're seeing apple using more and more apple watch wearers to build a powerful health platform. The apple watch is like a runaway train, and no company can slow it down.

For the technology industry, we have just made a strange journey. As growth in smartphone sales slowed in the mid-2010s, companies, analysts and experts began looking

Companies that can't take advantage of the smartphone revolution with their own hardware are betting heavily on digital voice assistants, which are said to be beginning to end the smartphone era. These digital voice assistants will be delivered to consumers through inexpensive fixed speakers at home. Many companies have launched large-scale PR campaigns to try to convince people of the future of the post smartphone era. Unfortunately, for these companies, enthusiastic media coverage does not cover up fundamental design flaws in product categories.

Apple is said to have missed the voice assistant train at almost every turning point because it relies on revenue from the iPhone. It is said that because of different management visions and the company's approach to privacy is positioned as a long-term headwind, it will lead to slower action in the field of artificial intelligence (AI) than its competitors. In short, apple is thought to have lost control of the direction of its technology after the mobile revolution.

There are clear signs that the lack of coherent future strategies around smart speakers and Apple is wrong. November 2017, well-known Apple analyst Neil

Sabat doesn't think fixed smart speakers represent the future of computing. Instead, companies use smart speakers to take advantage of the awkward stage of technology. At this stage, there seems to be no clear direction for things to go. Consumers are buying cheap smart speakers powered by digital voice assistants, but have no firm belief in how to use them. The main conclusion of the customer survey on the use of smart speakers is that there is no clear trend. If anything, it's that smart speakers are being used for basic tasks that can be easily done with a digital voice assistant on a smart watch or smartphone. This kind of environment has drawn a very different picture for the current health of the smart speaker market, and the media's narration is simply too optimistic.

Eventually, smart speakers will compete with a seemingly unlikely category of products, wearable devices. Less than 12 months after the publication of these articles, the bubble of smart speakers was shattered. This category is no longer sensational, and while Amazon and Google want to, people no longer use fixed speakers for anything other than basic tasks like listening to music and setting Kitchen Timers.

The main problem with voice discovery is that it is not a good medium for transmitting a large amount of data, information and context. So companies like Amazon need to reduce their ambitious vision of voice priority and pure voice paradigm. Last week's Amazon hardware launch highlighted an increasing number of people betting on the screen, a complete reversal compared to the years after 2015.

Bet on your wrist

While companies that missed the smartphone boom are betting on fixed smart speakers, Apple has taken a different tack, betting on a small device with a screen. The device will not be stationary, but will be defined as moving through the wrist.

After years of deep skepticism and cynicism, the consensus response to the apple watch has changed and is now more positive. Much of this is due to the fact that people can't miss Apple watches that are on wrists around the world. It is estimated that about 35% of iPhone users in the United States currently wear an apple watch. That's a staggering high percentage for a five-year-old product category, which largely illustrates how Apple's intuition about wrist is right.

Where does the apple watch's momentum come from? The answer lies in the grand unified theory of Apple products. One of the core principles of this theory is that the design of Apple's product category is closely related to its role relative to other Apple products. The apple watch is designed to handle more and more tasks originally assigned to the iPhone, just as the iPhone was designed to handle more and more tasks assigned to the iPad. People can continue this exercise to cover all of Apple's major product categories.

The apple watch is not a replacement for the iPhone, because some things can be done on the iPhone, but not on the apple watch. This eventually becomes a feature, not a vulnerability. The design of Apple watch allows the product to handle new tasks that iPhone can't handle, and the latter attribute largely explains how Apple watch has helped bring about a new paradigm shift in computing. Apple watch wearers can interact with technology in different ways.

Many believe cook's comments suggest that Apple will launch a range of medical grade devices that will go through the FDA's approval process. The idea is based on a fundamental misunderstanding of Apple's ambitions and the way it develops its products. Apple's health strategy is based on the use of hardware, software and services to rethink the way we deal with health issues. This means that apple isn't just building a repository for our health data, but it's not really revolutionary in the end. In addition, Apple will not just offer health and fitness services equivalent to counting steps or tracking miles.

Cook made a big bet on Apple's health four years ago, when he published his health review. It turned out to be one of Apple's best decisions, as the company avoided the route that required government agency approval to reach consumers' medical grade devices. Instead, Apple will frame its health platform as a new era computer, which will eventually become an alternative to the iPhone.

And Apple Fitness, apple isn't just launching a virtual fitness service. On the contrary, Apple Fitness is a Apple Watch service. Apple Fitness is reminiscent of Apple TV. in some ways Future third-party gym equipment displays, including treadmills and stationary bikes, can provide Apple Fitness exercise, which is not an extension. Furthermore, courses at other companies, such as Nike, may be Apple Fitness. furthe

If the apple watch is a runaway train, there is no obvious candidate to stop or even slow down the train. While other companies are slowly waking up to see the momentum of Apple watch, there is still a lot of indifference, mystery and misunderstanding about why people buy wearable devices. Too many companies still think wearable devices are smartphone accessories. This idea makes it impossible for competitors to see how Apple watch is bringing paradigm shifts in computing in ways that other devices fail to implement or replicate by making technology more personal.

One of the main gains from Apple's product launch earlier this month was that Apple was its strongest competitor. Apple watch's most legitimate competitors are the old apple watch and non consumer products (i.e. empty wrist). Although this brings a series of risks and challenges, six years later, there is still no real apple watch competitor from other companies. This shows the power of apple to control its own hardware, software and services in order to benefit more from technology without letting technology take over people's lives. (Tencent technology reviser / Jinlu)

Related news
Apple's next bet? Apple watch users will reach 100 million
Apple watch will have 100 million users
What will Apple Store change in the future after 20 years of operation?
Hot news this week
Biden signed a chip and scientific bill, a video call of WeChat iOS internal test suspension window, the advanced CPU caused Win11 to be difficult to use, Huawei new machines enter...
How to regulate the "broken card" operation to crack down on electrical fraud to prevent "accidental injuries" with cards?
Musk's eyes! Lei Jun released a full -size humanoid robot Xiaomi self -developed strength explosion table
Japan has confirmed that China has overtaken the US for the first time in the world's top three indicators of scientific papers
iPad 10 will be absent from iPhone 14 conference: October appeared on Apple's last non -comprehensive tablet tablet!
The three major indexes of the US stocks opened sharply: ROBLOX fell more than 4%, Twitter and Tesla rose more than 3%
Kuaishou TOB business Yu Bing: Self -developed chips or mass production after the end of the year, the video must be turned into light industry
The global streaming media have increased the animation circuit is becoming a new "breakthrough" for Youaiteng
After selling Tesla for $6.9 billion, Musk said he was not selling it, but a survey said he was still selling it. The title of the world's richest man may not be guaranteed next ye...
Meizu Pandaer Great: All products are reduced by 200 and 30 -containing mobile phone cases, heat dissipation back clamps
The most popular news this week
The survey shows that nearly half of the US Android users consider changing Apple iPhone
New bottle of old wine! Industry insiders: No one has the best cost control than Apple
Amazon requires US regulators to withdraw votes: bypassing the company's harassment of Bezos to disturb operations
Pet dog infecting monkey acne suspected "Human Poor" American CDC Reform Control Guide
Space Launch System to Fly for First Time
Tencent's second-quarter net profit fell 56% from a year earlier to 18.6 billion yuan
Fabless customers cut back on chip orders affecting Q4 capacity utilization
Washington's suspicion of TIKTOK exacerbated: How will the Bayeon government weigh it?
Pinduoduo launched its cross-border e-commerce platform in the United States in September
Put an SSD in your phone: from 2,499 yuan