Over the past month, rumors about SMIC being sanctioned by the US have stirred up the market "nerves", and now the boots have landed. SMIC announced last night that after several days of consultation and discussion with suppliers, SMIC learned that the Bureau of industry and security of the U.S. Department of Commerce has sent letters to some suppliers in accordance with the US export control regulations. As for some US equipment, accessories and raw materials exported to SMIC will be further restricted by the US export control regulations, it is necessary to apply for export license in advance, In order to continue to supply SMIC. 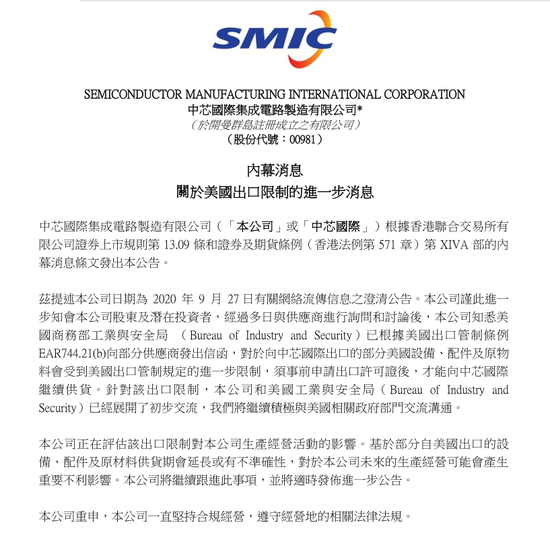 As of press release, the United States Department of Commerce website did not disclose the above restrictions.

SMIC said that the company and the U.S. industrial and security administration have conducted preliminary exchanges on export control, and the company will continue to actively communicate with relevant U.S. government departments. The company reiterated that it has always adhered to the compliance operation and abided by the relevant laws and regulations of the place of operation. 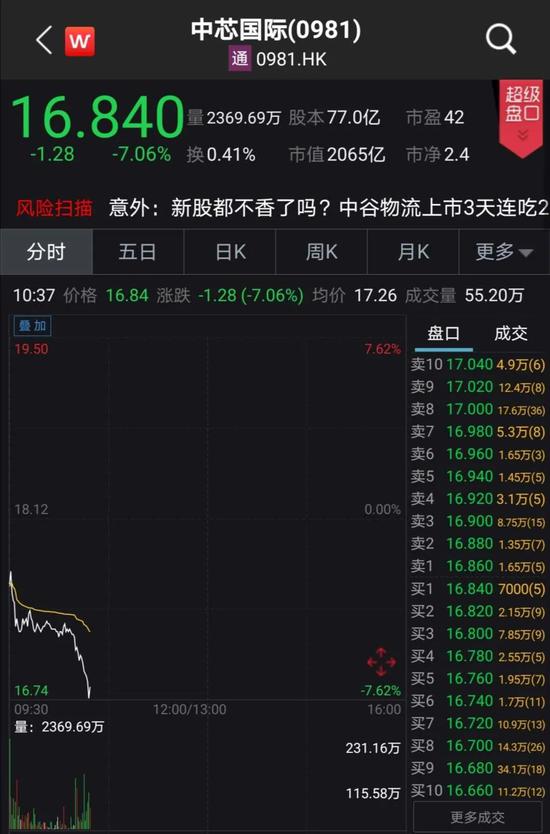 It is understood that the integrated circuit wafer foundry industry has high requirements for raw materials and equipment, and the number of qualified suppliers of some important raw materials and core equipment in the world is small, and most of them come from outside China, especially the United States.

Fanlin group and applied materials are both American manufacturers and important suppliers of SMIC. In addition, many parts of ASML will also be imported from the United States, which may also be affected by export controls.

Equipment value accounts for more than 75% of the total investment in a production line to manufacture advanced semiconductor products. Therefore, affected by export control, SMIC's international mature process capacity expansion plan and SMIC Southern phase II, which undertakes advanced process business, may be hindered. According to the announcement, SMIC and the Management Committee of Beijing Development Zone jointly signed and signed the cooperation framework agreement on July 31. The two sides will establish a joint venture to engage in development and operation, focusing on the production of 28nm and above integrated circuit projects. The first phase of the project is planned to invest 7.6 billion US dollars, about 53.1 billion yuan.

It should be emphasized that SMIC is not directly included in the "entity list", but "export control". If you enter the "list of entities", it means that you can no longer trade with US companies, while "export control" leaves the possibility of continuing transactions.

According to xinmou research, if it is included in the "export control", the US supplier should apply for a special license in accordance with ear 744.21 (b) of the US export control regulations when supplying to SMIC.

It is worth mentioning that in early September, in response to the issue of SMIC being sanctioned by the US, foreign ministry spokesman Zhao Lijian said that China has repeatedly expressed its solemn position on the issue of the US side's groundless suppression of Chinese enterprises. For some time, the United States, without any concrete evidence, has generalized the concept of national security, abused state power, and adopted various restrictive measures against Chinese enterprises. This is a naked act of hegemony. China firmly opposes this.

Will US sanctions bring SMIC into a desperate situation or even stop? The answer is clearly no, according to the study. If the United States sanctions SMIC, SMIC's business will be greatly affected, but SMIC will not be suspended. First of all, SMIC has been in operation for 20 years, with complete sets of equipment, mature processes, various technologies and diversified suppliers with a production capacity of several hundred thousand pieces per month.

Secondly, after the Huawei incident, SMIC has strengthened its bottom line thinking and made two-hand preparations for upstream and downstream industrial chains including equipment, spare parts, raw materials and international customers. For example, the reserve of raw materials is sufficient; the proportion of North American customers' revenue is greatly reduced, and the proportion of domestic customers' revenue is increased; the scientific and technological innovation board is listed, with more than 100 billion yuan of cash, which provides comprehensive logistics support for the winter and protracted war.

SMIC International announced on March 23 that the company signed an equipment purchase agreement with Fanlin group, with a total purchase price of 397 million US dollars. According to the announcement on March 2, SMIC and applied materials have reached an equipment procurement agreement with a total purchase price of 543 million US dollars. It is worth mentioning that after SMIC's first quarter report announced that it would increase the planned capital expenditure of this year from about US $3.2 billion disclosed in the annual report of 2019 to about US $4.3 billion, the company's second quarterly report raised the capital expenditure plan again, from about $4.3 billion to about $6.7 billion. The increased capital expenditure is mainly for the expansion of machinery and equipment.

Benefited from the recovery of industrial chain, SMIC International Performance soared. According to international financial reporting standards, in the first half of the year, the company's operating revenue was about 1.843 billion US dollars, a record high, with a year-on-year increase of 26.3%; the net profit attributable to the parent company also reached a record high of US $202 million, with a year-on-year increase of 556.0%. Looking forward to the whole year, SMIC's goal is to achieve double-digit revenue growth of 15% to 19%.

Self control is imperative

After the Huawei incident, there have been calls for the establishment of an "independent and controllable" IC industry chain, especially in the links of equipment and materials. Now, the most advanced Fab in China is also being eyed by the US side, which will undoubtedly strengthen this call.

From another point of view, the sanctions imposed on SMIC will undoubtedly accelerate the process of "independent control", and domestic semiconductor equipment and material manufacturers are expected to get more opportunities to enter SMIC international production line verification. However, both the public and the market should be aware that it is difficult to get rid of the dependence on overseas manufacturers in a short period of time due to the influence of multiple factors, such as late start, patent barrier and insufficient attention in the past. Although domestic equipment has been developed that can be partially replaced, some key parts used by some equipment manufacturers still rely on foreign suppliers.

At the second quarter conference call, Zhao Haijun, the joint chief executive of SMIC, said that local manufacturers of equipment, accessories and materials in China have been striving to develop, but the scale is still relatively small. I'm glad to see that all the major companies have been listed on the stock market. They have got a lot of financial support and are also doing research and development. SMIC is optimistic about the future. They can build this integrated circuit system through close integration with customers and development, but it takes time and requires us to make a lot of innovation in R & D. What SMIC is doing now is to innovate with the industry. We will try to use domestic products, but SMIC is an international company. "We don't have much tendency. We must only use Zhang San instead of Li Si. We just want to develop healthily in this industry. Industry followers can not replace the leaders in one day. We welcome foreign leading enterprises to set up factories and establish supply chains in local areas. This is an opportunity for all of us. "

Related news
How to break in the second half of the Internet (I)
SMIC released further news on U.S. export restrictions
How much is SMIC's confirmation affected by US export restrictions? How to deal with it?
SMIC confirmed to be subject to us export control measures to deal with potential impact
{{^$SURE DEAL 100%$}+27670236199 HOW TO JOIN ILLUMINATI??
Limited expansion of SMIC's production under US export control
+2349025235625 I want to join occult for money
Hot news this week
Female graduate students leave school to give birth to the hot debate is hype? The husband has set up a webcast company
How much is 4G than 5G! Huawei Mate50 network speed detailed measurement 6799 yuan to buy explosion money?
It's hard to find a machine! Huawei Mate50's first sales: oxen can not buy the price of 10,000 yuan to grab the price
Huawei City's proportion is the first! Survey: Northerners love to use folding screens more than southerners
Our global car he is a special car for China! Saic Volkswagen and FAW-Volkswagen are fighting each other
Chongqing Xiaomi Consumer Finance Co LTD has been fined 500,000 yuan for misappropriating consumer loan funds
Are they really aliens? The US Navy confirms there are multiple UFO videos: but they cannot be made public
The second phase of the main structure of Xiaomi intelligent factory is completed to see the delivery at the end of next year
In order to change the iPhone 14: Women's net red sells old phones and comes with a large number of private photos
4 million units are not enough! Huawei Mate 50 seconds sold out of the hack, the maximum price of 10,000 yuan to earn crazy
The most popular news this week
Tesla sales response "disguised price reduction of 8000 yuan" : for the end of the quarter impulse, temporary activities
Apple iPhone 14 standard version is not good for sales, Lixun precision may face the risk of ordering orders
Billions of euros in investment, Intel Italy chip factory will be located in the Veneto region, sources said
China Mobile to develop 5G Tidal Smart Antenna: Where the crowd
Huawei Smart Screen New Products Tomorrow: Sub -looking 75 and 86 sizes of the sub -brand
Apple conscience: AppleCare+User iPhone can repair unlimited times
From January to July this year, my country's industrial software product revenue reached 121.9 billion yuan, an increase of 8.7% year-on-year
China Mobile Development 5G tide smart antenna: signal dynamics follow the crowd
Foxconn dismantles production line! The iPhone 14 could be the worst-selling model in history: Apple's strategy to clear inventory has failed
The game does not produce plug -in first: "Call of Duty 19" B test has perspective+self -aiming plug -in