On October 7, according to Auto News's website,In the first three quarters ,40% of the 15 luxury brands in the American luxury car market showed an increasing trend, and 60% of the brands tended to decline.

It is understood that,This is mainly caused by the epidemic, which caused factories in Europe and the United States to stop production for several weeks, and BBA's inventory has been tight.Throughout the year, Mercedes Benz's cumulative sales in the United States remained ahead of the luxury market.

In addition to Lexus, Tesla's performance in the United States is also relatively strong. Its sales volume in the third quarter increased by 16.8% year-on-year to 64000 vehicles, far surpassing that of Audi brand. The cumulative sales volume of the whole year is only less than 1000 compared with Mercedes Benz.

In addition, the recovery of sales in the United States in the third quarter was achieved by the Porsche brand and Alfa Romeo, with a year-on-year increase of 5% to 15600 vehicles and an increase of 17.3% to 5000 vehicles. However, Infiniti, Land Rover, jaguars and zens are showing a larger downward trend. 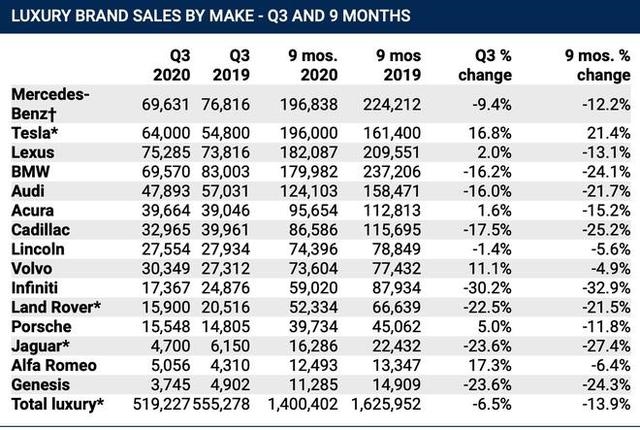