Chen Lei was filed for investigation on suspicion of duty embezzlement! His relationship with Thunde

Chen Lei and Xunlei's fate should be completely over. 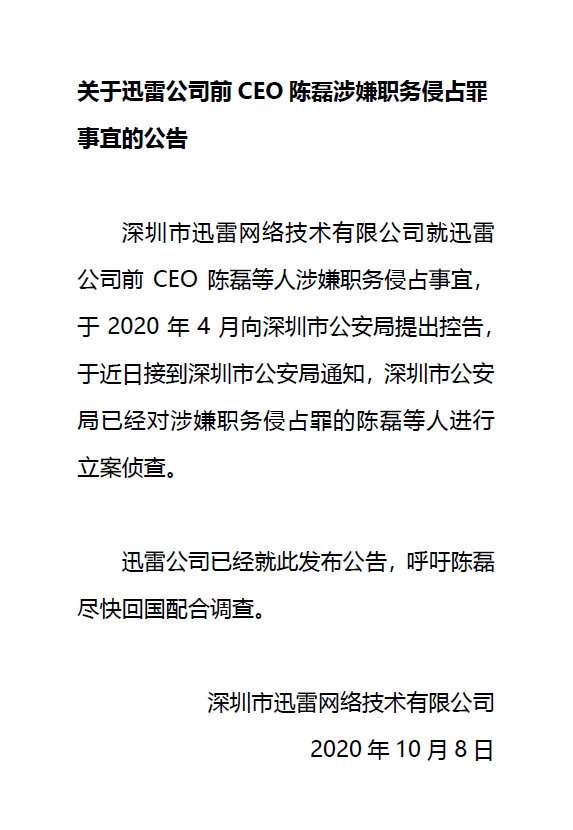 In addition to the announcement, Xunlei also followed a sentence, calling on Chen Lei to return home as soon as possible to cooperate with the investigation。 Chen Lei is now in the United States, but not long ago, he specially sent a circle of friends to invite domestic media to interview him. Perhaps he also realized that the current situation is very unfavorable to him.

According to Xunlei,Chen Lei is suspected of embezzling the company's assets by setting up false trading links, and making false contracts to extract company funds. The amount involved is huge. Chen Lei is also suspected of misappropriating tens of millions of funds of the company for illegal money speculation, which is prohibited by the state. In order to evade the investigation, Chen Lei left the country in early April.

Thunderbolt's announcement is for April

After being deposed, Chen Lei, interviewed by several media outlets, reviewed his and Thunder's events from a personal perspective

The fate of Chen Lei and Xunlei is inseparable from Lei Jun, the founder of Xiaomi.

Before entering Xunlei, Chen Lei has been in Tencent mixed wind and water, to now Baidu encyclopedia entries, as well as Chen Lei in Tencent brilliant

Although in Chen Lei's memory, Zou Shenglong, founder of Xunlei, invited him to join Xunlei before Lei Jun, Chen Lei at that time was not optimistic about Xunlei's cloud computing business.However, after such a long talk with Lei Jun, Chen Lei, who adores Lei Jun, officially joined Xunlei in November 2014 as CTO of Xunlei. He is also the first CTO officially appointed by Xunlei in more than 10 years.

For chen lei in 2014, it was a further year of his career, and in addition to his professional manager status, he also became an entrepreneur CEO, the company's heart technology.

2014 is also a year for Xunlei to seek transformation. Before the thunder, the scenery is infinite, almost at any time you can see the logo of thunderbolt in the upper right corner of the computer. However, with the rapid development of mobile Internet, Xunlei, who has stayed in the PC for too long, forgot to fly forward in the wind of mobile Internet. Thunderbolt's fall behind, also from this time on.

It was also in 2014 that Lei Jun came forward and pulled Xunlei. According to Tianyan investigation, in April 2014, in Xunlei e-round financing, Xiaomi group and Jinshan software, which have a deep relationship with Lei Jun, invested a sum of money in Xunlei, and directly sent Xunlei to the NASDAQ bell. 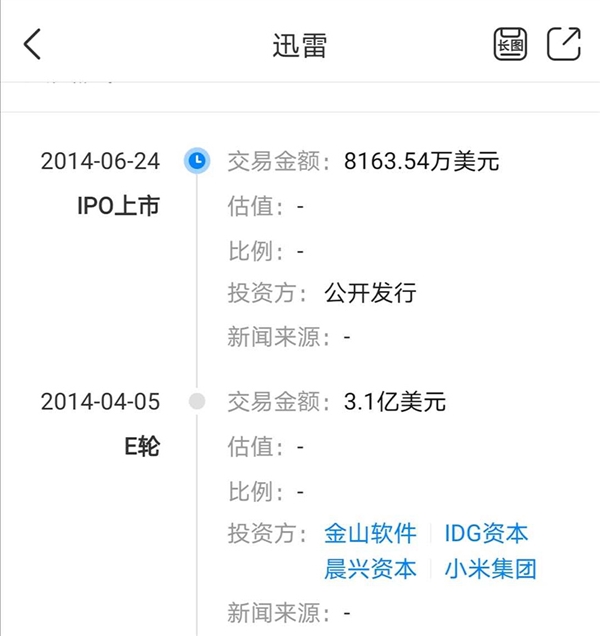 It's not hard to understand why Lei Jun came forward and invited Chen Lei to join Xunlei. Although Xunlei was very popular when NASDAQ rang the bell, it was obvious that it was not as fast as it was then. In the second year of listing, Xunlei encountered a low share price, and even had to sell its core business with long-term loss at a price of 130 million in 2015.

In fact, Chen Lei is also very clear about Xunlei's falling behind. But Chen Lei's joining is also regarded as a landmark event of Xunlei's exploration and transformation.

After Chen Lei entered Thunder Thunder, the first thing was to set up a new team and company

Chen Lei's record is always intuitive and rapid. In the second year, the network technology has launched the money making and star CDN products. After the launch of CDN, CDN, Iqiyi, Kwai, panda live, B, unfamiliar street, tentacles, and flag live broadcasting have gradually become the customers of the star CDN. In addition, make money treasure and star domain CDN business rose sharply for 7 consecutive quarters.

In less than a year, Chen Lei has made great achievements.Because of this, Chen Lei was promoted to the joint CEO of Xunlei in November 2015. In addition to these two products, Chen Lei also carried out the banner of all in blockchain. Driven by the blockchain concept, Xunlei's share price reached a climax between October 2017 and April 2018, with the peak value reaching $27.

Star domain CDN and all in blockchain and other businesses not only let Chen Lei quickly create a world in Xunlei, but also buried a mine for Chen Lei himself.

Conflicts erupted in a concentrated way

This mode of satellite domain CDN was called to an end in 2017. In February of that year, the Ministry of industry and information technology (MIIT) stipulated that only licensed enterprises could purchase broadband, and the Ministry of industry and information technology (MIIT) introduced the measures to clean up non-standard market transactions. Shenzhen Xinghe Technology Co., Ltd. has gradually appeared in Xunlei business association, Chen Lei said in an interview,Xinghe is a shell company used to avoid risks. It purchases hardware from NETCORE technology and then sells it to mine owners. In this way, it isolates the risks of NETCORE.

In addition, the announcement of strategic cooperation between Xunlei and new continent in 2018 can also prove that Lianxiang cloud is controlled by Xunlei. Chen Lei, who was also CEO at that time, explained the strategic cooperation to the outside world, that is, Lianxiang cloud would be led by Wang Jing, President of new continent technology group, and Xunlei group would grant Lianxiang cloud some blockchain business, including linkke, Lianke mall, linkke pocket, etc. at the same time, Xunlei still retains the underlying business such as Xunlei chain, as well as the shared computing business of playeryun and its network.

Today, some people familiar with Xunlei said that the suspected occupation mentioned in the Xunlei announcement was the result of the audit conducted by the new management of Xunlei. It was found that a Xunlei bandwidth supplier named Xinghe was actually a company controlled by Chen Lei. He had transferred a huge amount of funds to Xinghe through various illegal means, and took deceptive measures to try to take Xunlei company The core technical personnel were transferred to Xinghe Company.

But Chen Lei once said in an interview, Xing fusion and other affiliated companies in the network heart technology is open, know a lot of people,

Fate: regret when the CEO, regret into the thunder

But later, Chen Lei said in an interview that he regretted sitting the CEO, and Thunder's old team feud, more regret from Tencent cloud to Thunder. In Chen Lei's view, with the old team feud, mainly in the re-put the risk of Thunder on the table,

After becoming CEO, Chen Lei had a conflict with Yu Fei, the senior vice president of Xunlei at that time, because of the P2P business of Xunlei big data. It is reported that Xunlei big data also changed its name to Shenzhen Golden Dog Information Service Co., Ltd. in December 2017, Xunlei holds 28.77% of the shares and is the second largest shareholder.

Chen Lei later summed up the contradiction into two points. One was that he offended Fei because he was stupid; the other was that he was too simple and took too many risks of the company as a professional manager.

On April 2 this year, an internal letter to all the staff of Xunlei appeared in the mailbox of all employees. The news that Chen Lei, CEO of Xunlei, was dismissed at the board meeting suddenly spread. For Chen Lei, the news also came very suddenly.

Chen Lei said that he had asked for leave because he was ill, and that the resolution of removal was actually received after Chen Lei saw the news, and the board of directors sent the resolution to him for signature.

Thunder and all its affiliated companies quickly kicked out Chen Lei, Chen Lei's power in Thunder and Netcom Technology was cleaned up, and Chen Lei's most direct direct VP, technology, projects and business VP were cleaned up.

The board of directors of Xunlei appointed Li Jinbo, Zhang Yubo, Duan Hui, Shi Peng and Luo as members of the board of directors, and Wang Chuan, Hong Feng, Zou Tao and Liu Qin resigned as directors. It is understood that Wang Chuan and Hong Feng are the co founders of Xiaomi, Zou Tao is the CEO of Jinshan software, and Liu Qin is the partner of Chenxing capital. They are relatively close forces of Lei Jun department.

The power of Li Jinbo system entered the management of Xunlei. Among them, Li Jinbo was the technical partner and CTO of Xunlei, and the founder of Xunlei engineering technology system, and presided over the research and development of Xunlei's early product star products, Xunlei 4 and Xunlei 5.