"National software" Thunderbolt has been on the market recently. On the evening of October 8, xnet . NASDAQ announced that Chen Lei, the former CEO of the company, and others were suspected of job encroachment. Shenzhen Public Security Bureau has put the case on file for investigation. According to the announcement, Chen Lei is suspected of occupying the company's assets through false trading links and making false contracts to obtain company funds. The amount involved is huge. Moreover, Chen Lei and Dong Hao, former senior vice president of Xunlei, left the country together in early April this year. 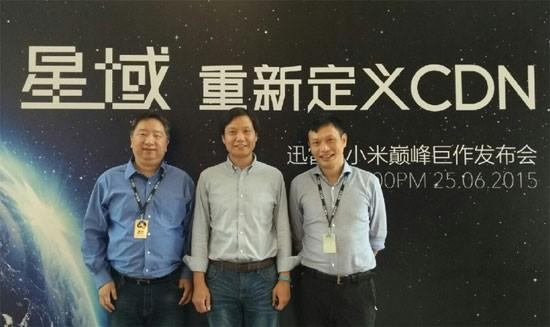 On October 10, Chen Lei responded to the case, saying: "Xunlei is a US listed company, and the audit institution (PWC) has found some problems. They want to pour all these problems (dirty water) on me, but the audit institution does not recognize it. They say that Chen Lei is suspected of job encroachment and has been put on file by the public security organ. The audit agency said that it was necessary to file a notice to do the audit. That's why they are so anxious to file a case. "

Judging from the trend in recent years, Xunlei, which once occupied the head market with software download, has begun to try to launch browsers, games, videos and other products in the face of the improvement of copyright control in the era of mobile Internet and the reduction of users' demand for downloading after defeating the QQ whirlwind and express in the same period. However, the effect is not ideal.

In an interview with Times Weekly on Oct.9, Mr. Bu Rixin, an investment consulting partner, said :" Thunderbolt has encountered a bottleneck in the development of all tool software, especially as a download tool software with low frequency and low user viscosity ."

On October 10, a Xunlei employee told the times weekly that the company's business is still in smooth progress and is constantly improving.

According to media reports, Chen Lei in office, through Dong cod net to recruit a group of Dong cod Heilongjiang Hegang townsfolk, friends, placed in the company's key posts, through fictitious trading links, the preparation of false contracts and other illegal means to obtain company funds, and suspected of misappropriating tens of millions of yuan of company funds for illegal speculation prohibited by the state.

On October 9, Huang Zhengqiao, a lawyer from Shanghai Yingke Law Firm, told the times weekly: "if Chen Lei is really identified as the crime of occupation, the amount involved in the case is as high as 10 million yuan. Referring to previous judicial precedents, he may be sentenced to more than 8 years of fixed-term imprisonment."

Chen Lei served as general manager of Tencent cloud before entering Xunlei in 2014.

At the end of 2014, Chen Lei was hired by Lei Jun as the first CTO of Xunlei.

In 2015, Chen Lei served as CEO and co CEO of Netease technology under Xunlei. In July 2017, Chen Lei officially took over as CEO of Xunlei, responsible for Xunlei's download and CDN business.

On April 2 this year, Chen Lei was removed from the post of CEO by Xunlei's board of directors. Li Jinbo, the new chairman of the board, replaced Chen Lei as the new CEO of Xunlei group, Xunlei, Netease and other affiliated companies.

As a technical partner of Xunlei, Li Jinbo participated in the development of Xunlei's early products Xunlei 4 and Xunlei 5.

After Xunlei released its second quarter financial report this year, Li Jinbo said that he would give priority to the development of cloud computing and blockchain business.

However, according to the previous report of interface news, after the new senior management team of Xunlei took office in April this year, the blockchain Business Department of Xunlei has laid off a large number of employees. As of June this year, there are only about 10 employees left in the business team.

The above-mentioned Thunder employees told Times Weekly that they hope that everything is normal, only the smooth operation of the company, employees can have income. At the user level, it can be found that in recent years, thunderbolt is more and more inclined to the browser business model. Relying on its original user flow pool, it increases the commercial advertising entrance to realize the realization of part of its traffic. However, Xunlei under this mode will naturally affect the user experience.

Many industry insiders believe that under the current market competition pattern, Xunlei can hardly rely solely on the label of download tools to obtain profit growth.

Xunlei is obviously aware of this problem. After Chen Lei joined in 2014, Xunlei opened the era of blockchain.

At that time, market analysis pointed out that Thunderbolt itself has some advantages in P2P technology. Genetically, Thunderbolt has a better chance of success than others.

Chen Lei All in block chain strategy, Xunlei launched a virtual currency called play coin. In Thunder's plan, users are attracted to exchange idle bandwidth by "playing with coins ", and then more users are developed, and a distributed network of tens of millions of nodes is finally formed.

The idea in the initial stage is also really good for Thunder.

For the fourth quarter of 2017, Thunder turned its block chain business into a profit and doubled its net profit Q1 2018, with shares rising to $27.

By 2018, the "play coin ", which had been renamed" chain ", had been sued by investors in class, questioned in disguise ICO, and criticized by the China Internet Finance Association.

In September of the same year, Xunlei had to sell all the business, such as chain, chain mall and chain pocket, and only retained the sharing business of playing guest cloud and its network. As of the first half of this year, the number of Xunlei member users was 3.9 million, a significant decrease from 4.6 million in the previous quarter.

On october 10th, jiang han, a senior researcher at pangu think-tank, told times weekly that the biggest problem with fast thunder was that its good download business had no space and prospects for development in the mobile internet era.

Bu Rixin also told the times weekly that even with the extension expansion of Xunlei's download business, it is difficult to form a platform product like QQ and wechat because of the restrictions of user frequency and other aspects.

In fact, Thunder itself is looking for a new "second curve ".

According to AI media consulting data, in 2020, China's personal cloud storage users are expected to reach 401 million, and the market space is extremely large.

Some industry analysts believe that with the gradual popularization of 5g technology, the demand for personal cloud storage will be further improved.

Bu Rixin told the times weekly that the online disk business is a breakthrough point, which can effectively cooperate with Xunlei's download platform, which greatly promotes the business of Xunlei.

In the current market, competitors in the field of cloud disk and online disk such as Baidu network disk and Tencent Weiyun have taken the lead in seizing most of the market share. For Xunlei, considering the copyright problem of downloaded content, this new industry is not easy to promote.

On October 9, Wang Juan, a researcher at Beihang digital society and blockchain laboratory, told the times weekly that unless Xunlei has absolute advantages in price and function, there is not much room for new development.

In view of Xunlei's block chain related business, Wang Juan pointed out that Xunlei's own business is closely related to this respect. The content and rules of digital trade in international market are also in a period of change and development, and Thunder needs to make a truly innovative attempt.

Related news
VMware intends to acquire Pivotal Software
Former CEO was put on file to investigate "national software" Xunlei lost money for six years
From Zou Shenglong to Li Jinbo, I know the front and back of Xunlei's lawsuit against the former CEO
Lost love
+2349025235625 I want to join occult for money
+2349031459947 %%π¶ I want to join occult for money ritual
+2349031459947 ## Where to do money ritual in Nigeria....
#/#+2348034806218## HOW TO JOIN ILLUMINATI FOR MONEY,POWER#/
Hot news this week
Zhao Lijian responded to the British "blocking" Huawei: generalizing the concept of national security harms others and harms themselves
Zhao lijian said the UK's decision to block Huawei under PRESSURE from the US was damaging others and not benefiting itself
Behind Microsoft's acquisition of Blizzard: Intended to build a super game carrier, SONY is the most hurt
Microsoft's $68.7 billion acquisition of Activision Blizzard became the largest acquisition in the company's history
Mediatek's 40% share topped the mobile SoC market, leading for six consecutive quarters, followed by Qualcomm and Apple
Scissor doors, lifting lidar! Baidu car under the blood cost of the concept car details were first exposed
The largest transaction in Microsoft's history! Hao Zhi 436.1 billion cash acquisition moving blizzard
Cait: it is not recommended to take quarantine measures directly for travel card users with asterisks
Huawei applied for the Tianchi trademark again, and the international classification is scientific instruments and website services
Jing Jia micro: JM5400, JM7200, JM9 series graphic processing chip successfully achieved industrialization
The most popular news this week
NetEase Cloud Music to the regulatory authorities reported "fake" song washing and other unfair competition
Angry Bird 2 has been removed from the Apple Mall, when is back to uncertain
Amazon shares plunged 12 percent this week for the worst weekly performance since 2018
B Station 2021 Hundreds of UP Lord Awards: UP master hand-made Samsung Pile Gold Mask is best
Huawei Mate 50 meal rendering drawing out: actually hit the face millet 12 Ultra
iPhone 13 serious rollover screen can't see! Apple is anxious
Total supervision! 4 departments to carry out guidance for 11 leading enterprises such as Cargo Lala and Tencent
The platform lures minors to rent mobile phones at high prices! Netizen angry comment: There is no bottom line
Microsoft shot: Windows 10 can upgrade Win 11 for free!
The global discourse pattern after Microsoft acquired Activision Blizzard