The data of Q3 mobile phone rankings are all from Master Lu's new version (Android v10.2.8). The engine is upgraded, the pressure value is increased, random read-write tests are added, and the score system is adjusted accordingly. How big is the adjustment? Generally, the flagship is more than 80 thousand. 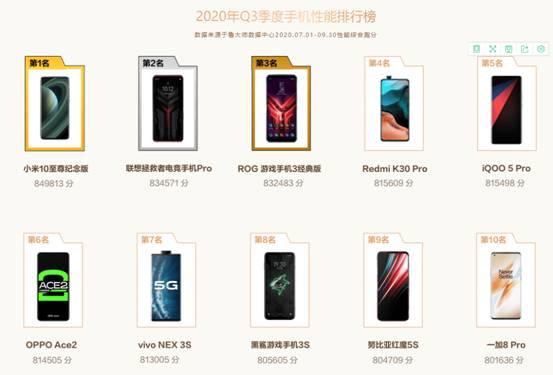 In terms of chip ranking, the total score gap between snapdragon 865 plus and snapdragon 865 is also very small. Plus only has a small advantage in GPU with higher frequency. 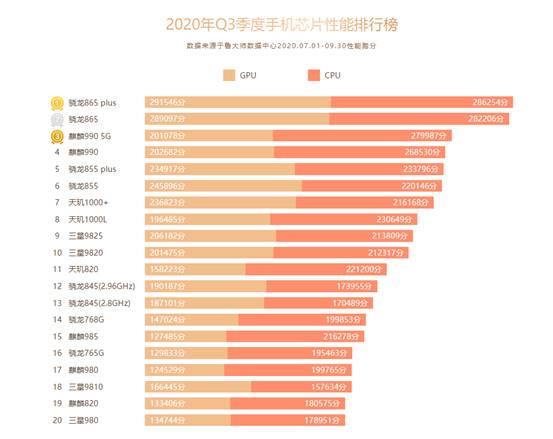 Surprisingly, with the increase of test models, the ranking of Tianji 1000 series has dropped by several places compared with Q2. It seems that it is easy to climb high, and it still needs to work hard to maintain the stability of the joint development division.

In the middle and high-end chips, the snapdragon 768g is still the unshakable toothpaste, and the Kirin 985 has no one to surpass. The Xiaolong 765G and the snapdragon 768g have become springboards that any manufacturer can step on. Basically, new machines carrying these two processors will appear every month.

As for some newly released mid end toothpaste processors, such as Xiaolong 690, Xiaolong 720, Tianji 800, etc., they can not be ranked in the top 20.

A good processor is the foundation, what house can be built on it will have to show their magic power. Generally speaking, the performance of a certain mobile phone is good. In addition to excellent configuration, it also depends on whether the operating system is fluent enough. The competition for the top of the fluency list is the most intense in the quarterly report. 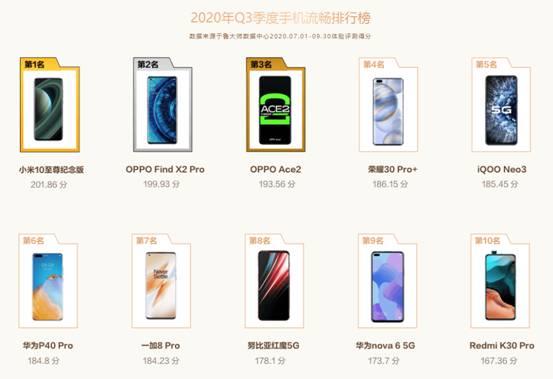 Oppo find x2 pro and oppo ACE2 ranked second and third. Since the innovation of coloros 7, oppo has been a frequent visitor of the fluency list.

In terms of UI ranking, black shark joy UI, Nubia UI and 1 hydrogenation OS rank in the top three respectively. UI ranking is related to the coverage of models under the brand. Only being a flagship, UI with fewer models will be higher. 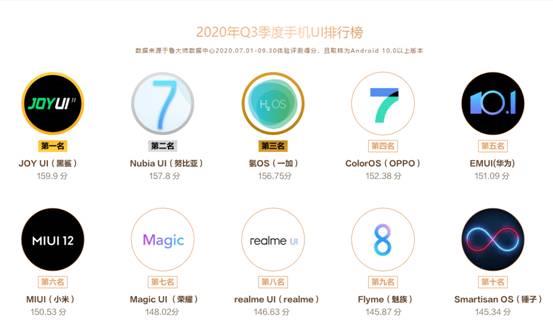 The Black Shark JOY UI operating system is not a fully inherited MIUI system, but rather uses

Covering a wide range of models, coloros ranks first, followed by Huawei emui and Xiaomi MIUI. In the past, Huawei and Xiaomi competed, but now oppo is on its way to a tripartite confrontation.

After reading the performance and fluency charts, let's take a look at the most influential temperature list for daily use experience.

In the 5g era, 5g baseband processor is getting hot, and 5g network has high requirements for service life, which is hard for mobile phone manufacturers. In order to plug the large battery in the limited fuselage, we have to find ways to plug the cooling module. Many of the high-temperature rankings are flagship products with strong performance and high power consumption. Once the heat dissipation is not done well, it is not uncommon to turn a mobile phone into a lighter.

Oppo reno3 Pro 5g is the champion of both peak and daily low temperatures in the two low temperature rankings. The mobile phone uses a three-dimensional liquid cooling cooling system, which is covered with a layer of copper foil and double-layer graphite flakes on the flexible screen of the customized version, so as to effectively transmit the heat. In addition, the thermal energy of the back of the fuselage will be transmitted to VC through thermal conductive gel. Thanks to good heat dissipation design, the average daily temperature of OPPO Reno3 Pro 5G is only 28.46 degrees.

In Q3 mobile phone temperature ranking, the best temperature control brand belongs to Samsung. After experiencing the pain of note 7, Samsung is now very cautious in charging and cooling.

This time Samsung was also exposed a melon. The Samsung note20 ultra with Orion 990 uses copper for heat dissipation, while the version with snapdragon 865 uses graphite for heat dissipation. As for why different cooling systems are used, it is speculated that the heat dissipation material has a great impact on the performance of the processor, so Samsung has matched different versions. However, it is such a mobile phone that the domestic sales are bleak.

Samsung note20 is accused of squeezing toothpaste and cutting leeks, and the price of ultra version is very high. In the new market share of Android, Samsung only ranks sixth, with a share of only 4.29%. It is hard to believe that this is the performance of the first mobile phone manufacturer. 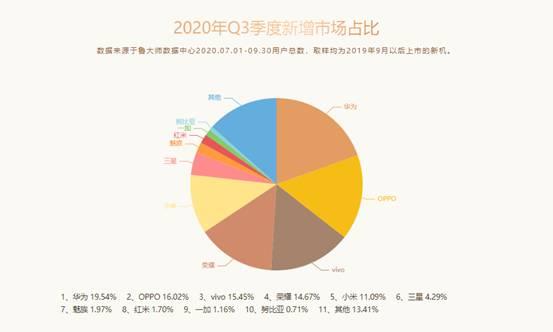 According to Lu master's app evaluation data, Huawei was still the largest new Android Market in the third quarter, accounting for 19.54%, which was higher than that in the previous quarter. But this is not something to be happy about. Huawei's chip supply was cut off after September 15, and the real test has just begun.

Oppo and glory are still in the second and third places. It is worth noting that the share of red rice has increased a lot, and has exceeded one plus. Since Lu Weibing took over Hongmi, it is not surprising that the sales volume of many models has been improved, and the share increase is also expected.

AI chip ranking: no match for snapdragon 865 / plus

In terms of mobile phone AI chip ranking, the snapdragon 865 and the snapdragon 865 plus have not found rivals in AI performance, and Kirin 9905g can only rank second. It is estimated that the fifth generation AI engine will have to wait for the latest A14 processor to enter the market. As for the expected Kirin 9000, it is uncertain whether there will be sufficient supply. 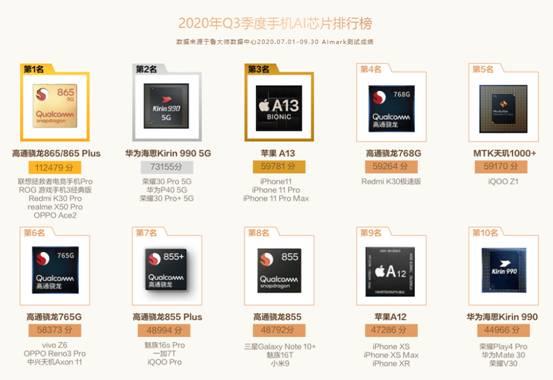 Interestingly, once the boundless scenery of MediaTek Tianji 1000, was defeated by Qualcomm 865, the Celldragon 768 G, those shouting MTK YES slowly, MediaTek may now fall into a high-end embarrassing situation, wanted to impact the high-end, Hard to be played by the iQOO into the middle end, but also lost the former Shanzhai machine Jiangshan. 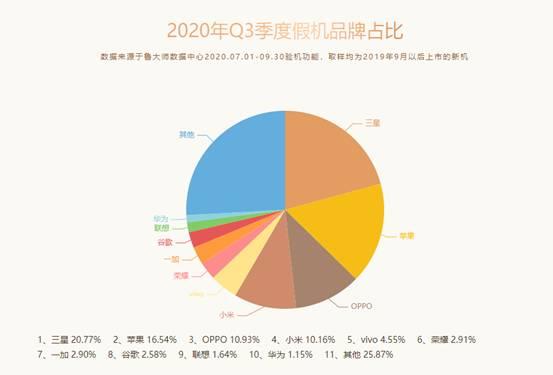 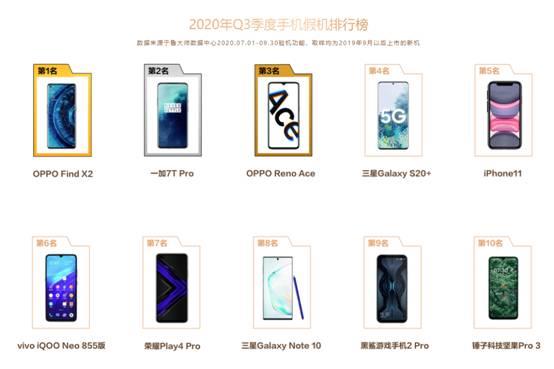 And in Q3 quarterly fake report,

That's the Q3 mobile phone report. The 865 plus is the most concerned one, but it's a bit unsatisfactory. Three quarters of the year 2020 has passed, and there are still a few months left. The iPhone 12 will go on the market, Huawei will solve the difficulties, and Xiaomi will attack the high-end products. It sounds very busy and exciting. You can look forward to it.