Evolution of retail investors in the United States: older investors are reselling their stocks to young people

The US stock market seems to be undergoing a generational shift. Baby boomers born after World War II, in the mid-1960s, seem to be selling stocks, while millennials born in 1981-1996 are increasingly owning more. A breakdown of the ownership of family stocks and equity funds by algebra shows that the baby boomers now hold 53% of the shares, while millennials hold 3%. Although the proportion is not large, they are also taking over the shares of the retired baby boomers. 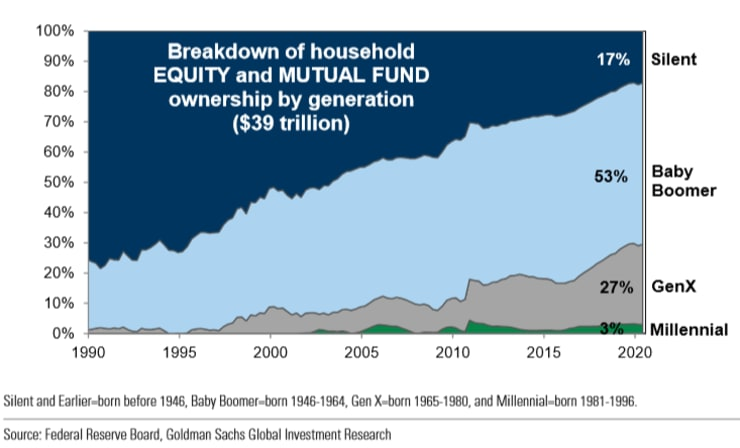 In between, the share of Gen X in between has increased to 27%.

Does the market need to worry about baby boomers selling stocks?

Many believe that millennials, with the largest population today, lack the financial resources to buy shares being sold by the baby boomers in real time.

That means baby boomers may have to sell their shares at a discount.

However, the market need not worry too much about the current stock will be sold by the baby boomers. Because the stock holdings of this generation are mainly concentrated in the hands of the rich, they don't need to sell shares to fund their daily expenses after retirement.

The Fed reports that the richest 10% of households own about 88% of individual investors.

Nevertheless, the steady loss of sales will continue for several years.

Harley bassman, Merrill Lynch's head of long-term fixed income, believes that the law's rules on the sale of shares by older people will still lead to large and continuous sales of shares by the baby boomers.

For example, assets in an IRA must be withdrawn from the age of 72. Every month, more than 250000 Americans cross the threshold of 70. There are nearly 11 trillion dollars in these accounts. Bassman estimates that the number of shares sold in this part of the money will reach $75 billion this year and will increase to $250 billion a year by 2030.

In the $30 trillion U.S. stock market, this is not a huge total, but it represents a sustained and growing trend of sales in the market.

The withdrawal of this system from the stock market is largely achieved through pension funds, a very popular asset allocation tool that gradually converts stocks into bonds or cash until a specified retirement year.

In this case, the good thing is that millennials are now the largest generation, entering the peak of their careers, and that young people are beginning to engage in new contacts with the market - a good time to absorb the old to sell shares.

Of course, such large and slow share transfers may not always go so smoothly. On the one hand, given the two employment crises in more than a decade and the slowdown in wage growth, it is difficult for young investors to increase their incomes.

This kind of conversion may also bring about the change of stock market style.

Young people seem to be most interested in familiar growth stocks, the products they know and use, rather than the old economy companies and dividend paying blue chips that have flourished for decades.